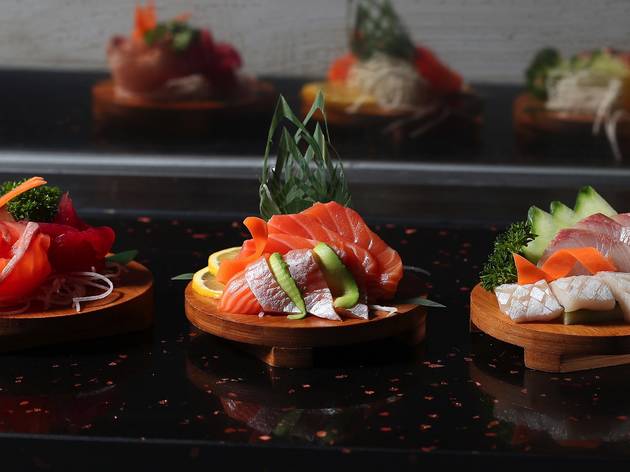 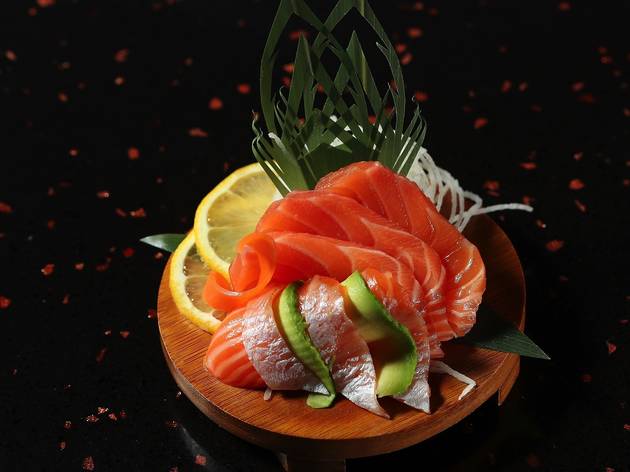 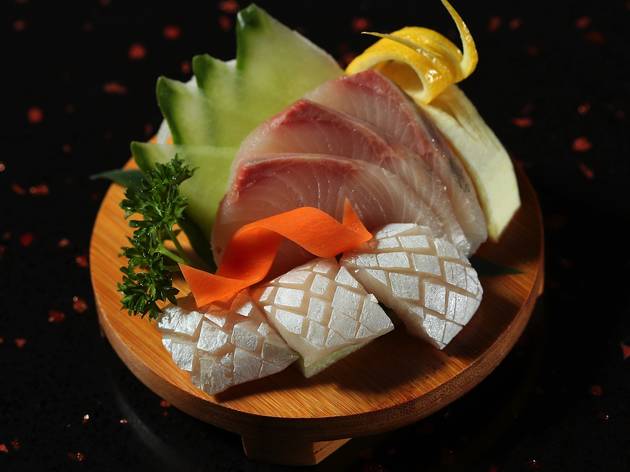 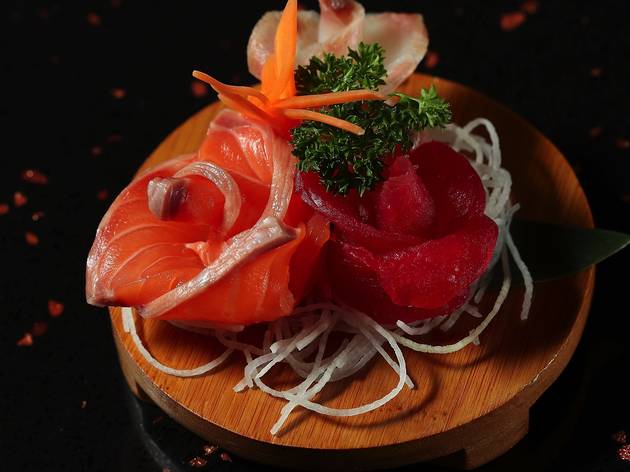 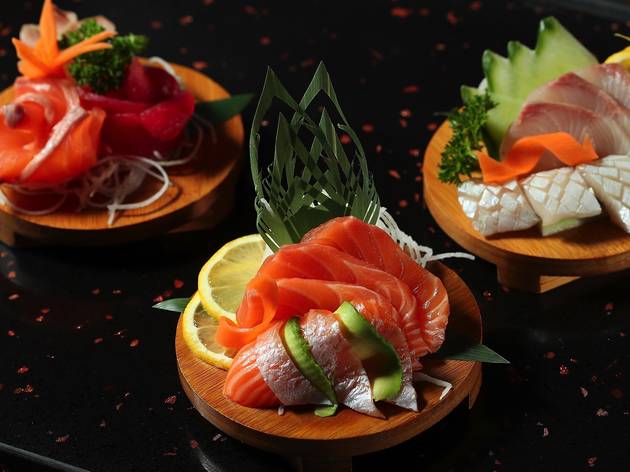 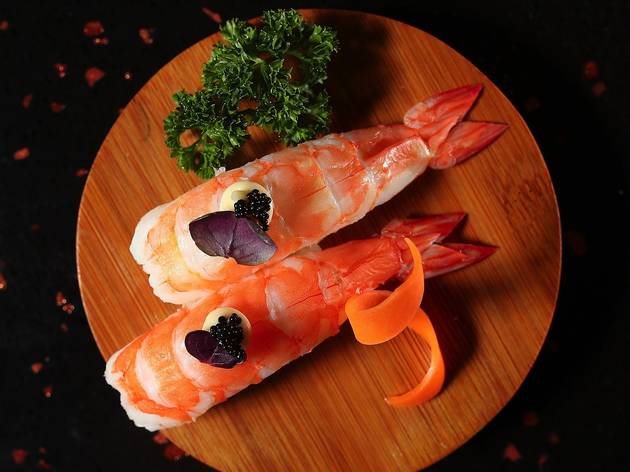 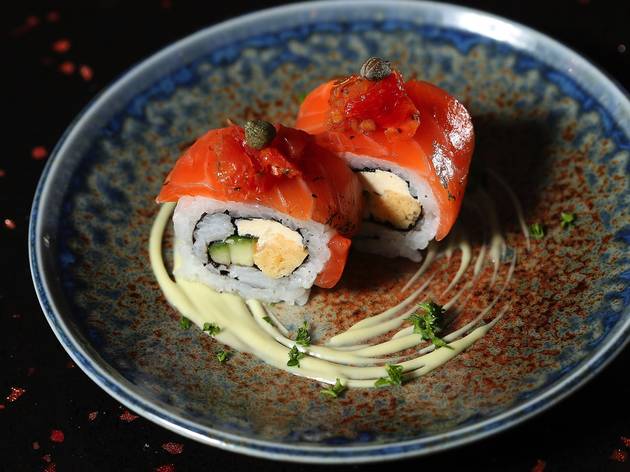 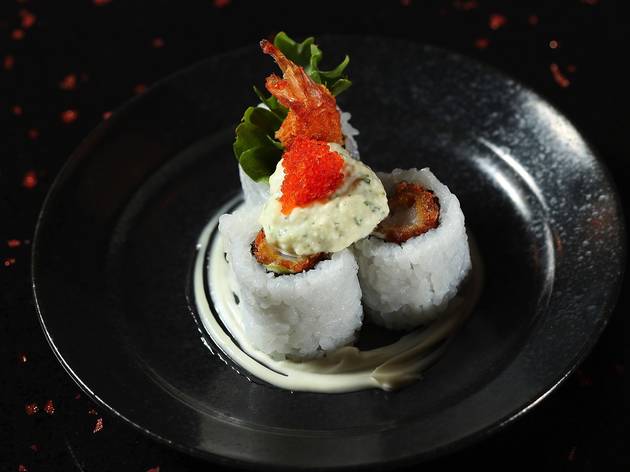 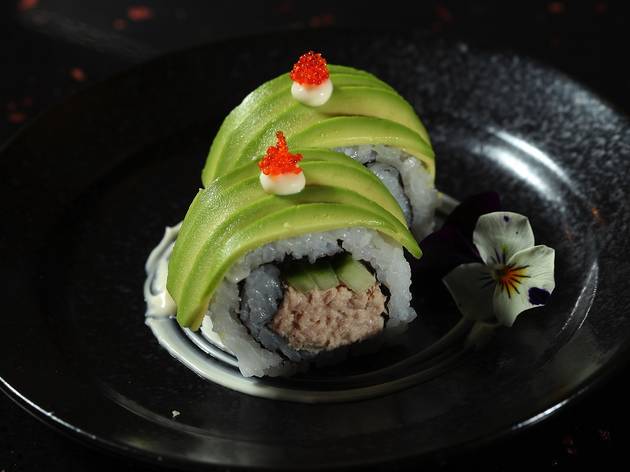 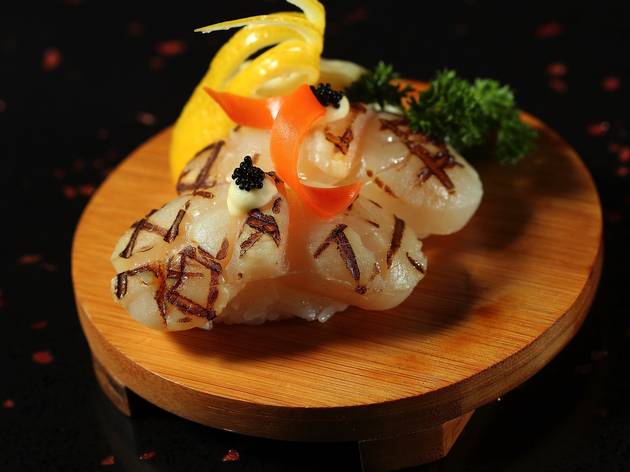 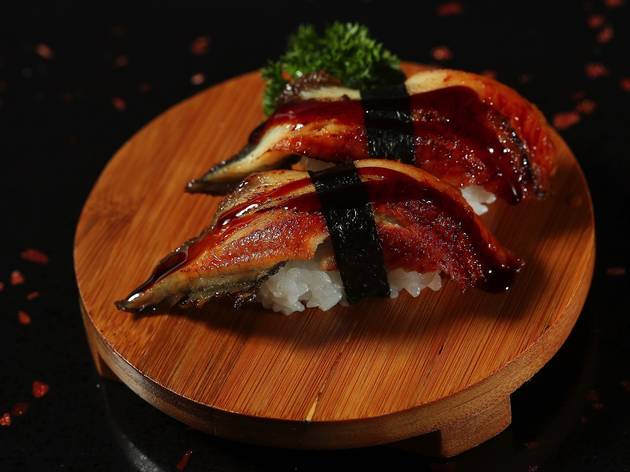 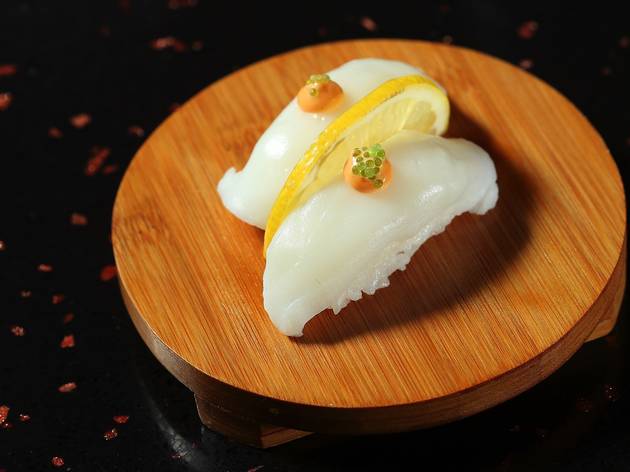 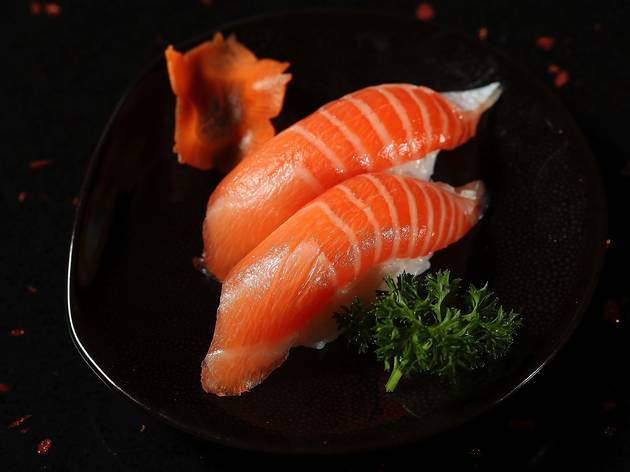 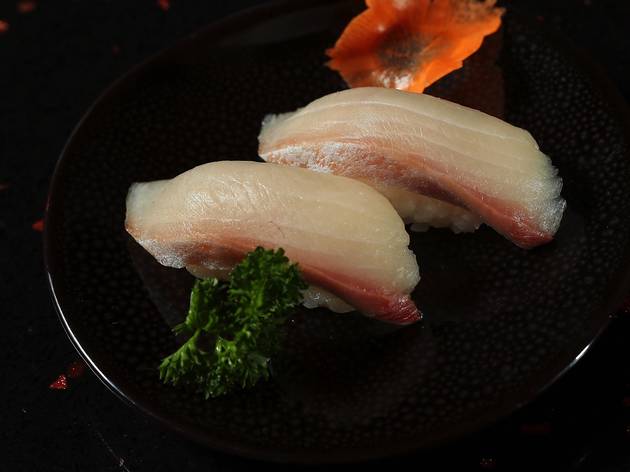 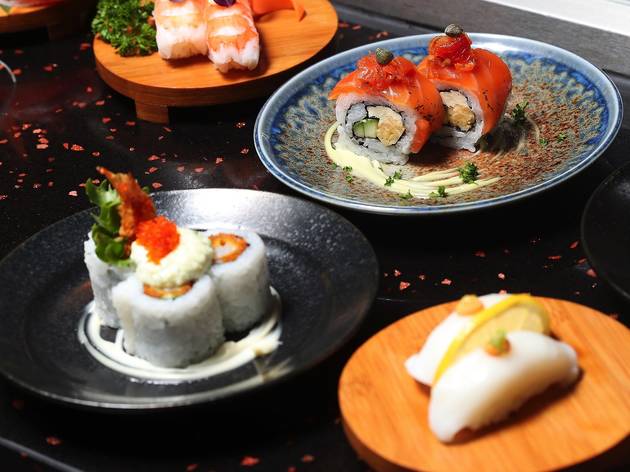 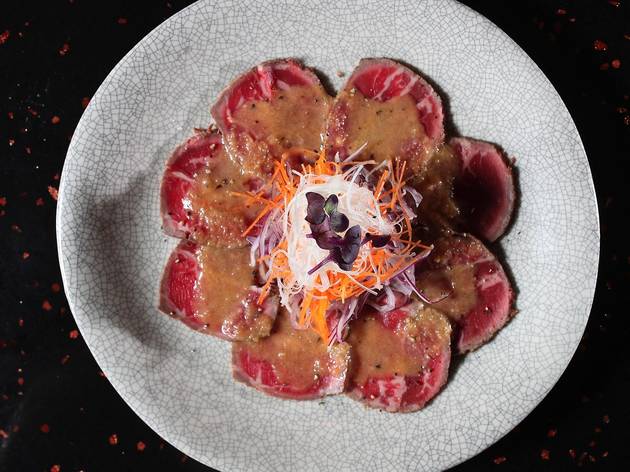 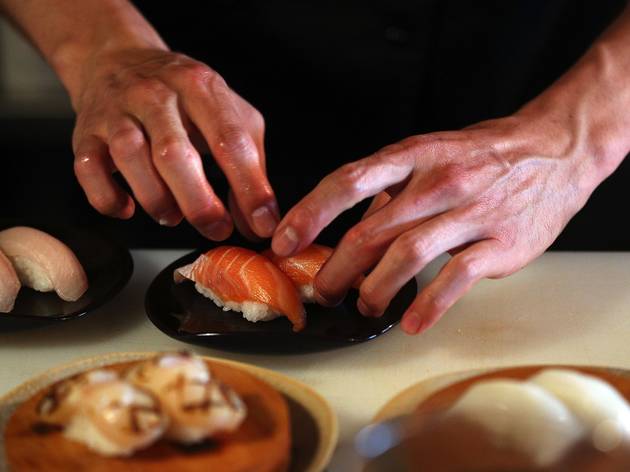 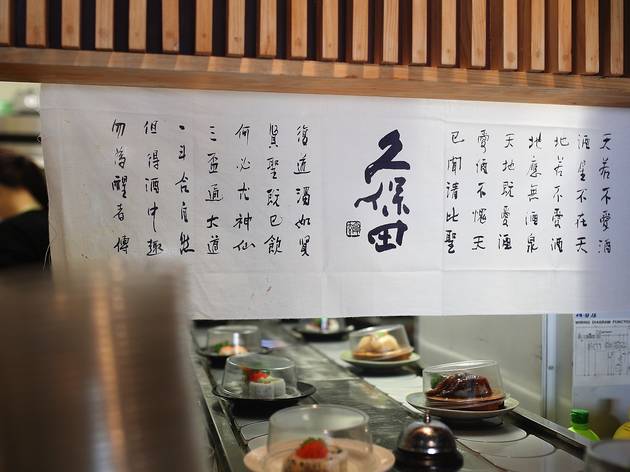 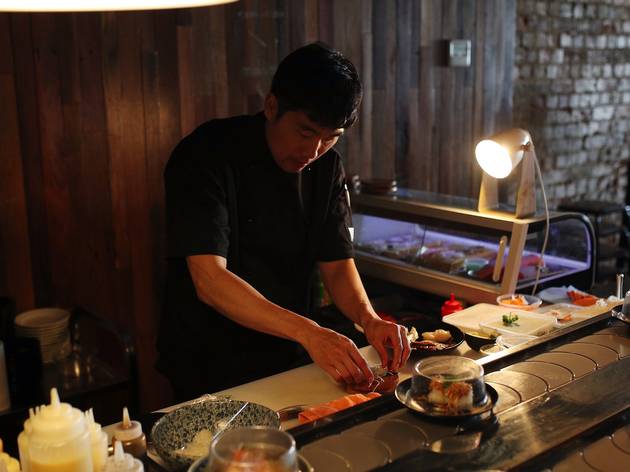 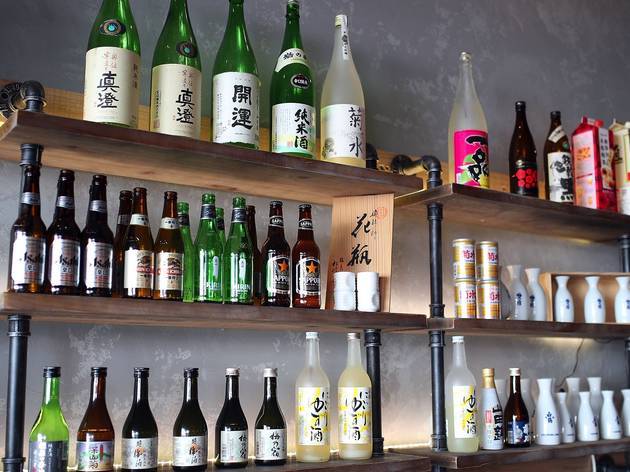 All aboard! There’s a new sushi train in town – and it deserves your attention

Why is it that Melbourne’s sushi train restaurants are characterised by either run-off-the-mill food or uninspired locales (read: shopping centres)? Brace yourselves Japanophiles: Ganbare Kaz on the Windsor end of Chapel Street is set to become your new destination for creative, top-shelf sushi, with low prices and a fitout that will impress the fussiest of hipsters.

No matter where you plonk down along the large bar that curves around the sushi train, you’ll have a good view of the chefs flexing their impressive knife skills. Pricing is based on the failsafe colour-coded plate system: $3.50 for white, $4.50 for black, $5.50 for blue and $6.50 for beige. An iPad at each table is used to order drinks and hot food (think izakaya mainstays like gyoza and octopus takoyaki), or a particular kind of sushi that hasn’t yet docked at your station.

The plates are your first clue that these guys are detail-orientated. Instead of cheap plastic, here they use polished, hand-painted ceramic versions to hold your makis, nigiris, aburi and gunkans. They also embrace the garnish, with each piece decorated with herbs, flowers or a smattering of seeds to add colour, flavour or texture.

With so many plates whizzing past, how does one choose? Be led by your stomach – it’s all pretty good. An inside-out roll with juicy fried chicken and avocado is luxed up by kewpie mayo, with puffed rice adding extra crunch. A nigiri of glossy white ika (squid) is nicely firm but smooth tasting and doesn’t need much except a squeeze of the lemon it’s served with. Marbled salmon belly is flamed to achieve ultimate butteriness and capped with lashings of red onion, red tobiko and a chilli-flecked mayo adding a trifecta of tang, salt and cream. There’s orange akagai and crimson-bottomed hokkigai (same-ish clams, different regions) reclining on rice pillows. Cured silver-skinned mackerel – the king of Omega 3 – is tied to its rice parcel with a nori sash, with spring onion adding zesty bite to the rich fish. Gunkan (‘battleship’) sushi comes loaded with salmon chunks in a moreish spicy mayo, octopus, abalone or three types of roe (black, red and green). There are interesting veg options too: try the pumpkin and beet or the sundried tomato. And mix things up with the seaweed salad enlivened with sesame seeds and the prawn okonomiyaki with a good helping of bonito flakes for that intense umami hit.

You’ll have to use the iPad to order the hako sushi, but trust us, you want to. This popular type of sushi from Osaka (a surprising rarity in Melbourne), uses a wooden box press to compress fish on vinegared rice with morsels of roe, avocado and cream cheese. Here you can get it with scorched soft-pink salmon, neon-purple tuna or stripy prawn, but no matter what you choose the showcase of textural and flavour contrasts is a showstopper.

You’re eating against a backdrop of exposed brick and touches of Japanese calligraphy. The soundtrack of good Japanese downtempo and hip-hop makes you want to hang around for another Kirin, Asahi, or Sapporo. It’s quiet for now but once word gets out we’re betting it won’t stay that way. One thing’s for sure: Melbourne’s sushi train scene is finally on the right track.