It fronts like Dennis Denuto’s lacklustre office in The Castle, but step through the dodgy blinds and sheisty gold lettering of this one-time legal office and things get decidedly more a la mode. You’ll see a lot of that sleight of hand at work at Gray and Gray, the fascinating brainchild of Boris Portnoy (All Are Welcome Bakery) and winemaker Mitch Sokolin that entered the cocoon a shabby law firm and left a stunning Georgian and Russian wine bar, the likes of which Melbourne has long wanted for.

Anyone following Gray and Gray’s rise will have clocked the magnetic sense of self-assuredness that runs through the whole experience here; a wink-to-camera cheek that begins with the mind-bending anti-design and copy of the website (“Give the worst gift! GRAY and GRAY gift!; CLOSING DAILY OPENING DAILY; BOOooK NOW!”) and continues through that absurd High Street facade. Even the Google reviews are funny—50 percent praise for the restaurant, 50 percent breathless allegations of malpractice against the former tenants (“Have given my family the run around for the 2 months!”). The mood is dialled somewhere near gonzo before you even arrive, but don’t be fooled—dinner at Gray and Gray is a study in flair and precision that lampoons the dour Soviet stereotype with razor-sharp wit and seriously good food.

The “Set Post Harvest Menu” (the modus operandi for the moment, with a la carte offerings to follow soon) references Sokolin and Portnoy’s Russian heritage and shared experience making wine in Georgia, unfolding over four superb courses from the Caucasus. It’s a completely unique, daring and extremely reasonably priced affair ($65 per head) that sets an exciting precedent for the similarly off-piste ventures that it will no doubt inspire, and on any given evening, it may go something like this:

The wine list is scrawled over a blackboard that you might have to pop out of your chair to see; a cleverly curated programme that leans more natural and funky, and introduces us to some attractive Georgian picks, including the stunning Freya’s Marani: a dry “amber” Tsolikrakh (a blend of Tsilokouri and Krakhuna—two popular west-Georgian varietals) made by friend of the restaurant Enek Freya Peterson. This might be a good time to cut a quick lap (which you’re encouraged to do), take stock of the gorgeous mid-century modern fit-out and its eggshell blue accents, the ten-storey medovik honey cake that dominates the pass (more on that later), the deep-set open kitchen behind it and the finely garbed, Monocle-subscribing patronage occupying Gray and Gray’s 28 seats.

“A selection of breads, fats, dairy and pickles” kicks things off with an array of, well, those things, and is brilliantly led by a tuft of whipped salo—an impossibly light, palate-coating Eastern European lard spread. Think Marshmallow Fluff, but make it pork rind fluff. Beetroot-stained celery and pickled Georgian green tomatoes refresh with an addictive sourness, and a wedge of housemade sulguni—a lightly brined, Georgian cows milk cheese—adds another moment of puckering intrigue, whisked away post-haste on rye.

Cubes of mackerel selyodka topped with curls of white onion and dressed with blood lime are astonishing—the heavy flesh brightened substantially by the native citrus—while a bowl of delicately textural tripe self-sauced with a soft egg is the kind of gamble that warrants Gray and Gray’s ample hype—the type of thrill that will keep us coming back.

If you’ve been watching Gray and Gray’s meteoric success thus far you’ll know about its centrepiece dish, but the star power of the coulibiac must be seen IRL to be felt in full. The pastry is first raked into a diamond netting that encases a cheerful melange of soft-boiled egg, salmon, mushrooms, spinach and buckwheat. It’s then baked and sliced in half to reveal a pastel cross-section somewhat mid century modern itself, a mustard and sorrel sauce spilling out towards the recipient like a full moon hitting a still lake. Its plush flavour profile is offset by a tart, dill-crested plate of artichokes. It’s perfect.

Powdered profiteroles and an optional add-on slice of honey cake follow: a biscuit stack that softens through the day under its own weight, mortared at each layer with butter and bold Tasmanian leatherwood honey. Worth it no matter how full you are, even just to watch the knife make its slow journey from top to bottom.

This is really exciting territory for Melbourne. On the one hand, it’s an innovative and delicious look at a historically overlooked region—a place for eating and for learning that also happens to look brilliant and make you feel cool as shit for having visited. Big tick. But it’s also exciting for “feed me’s” in general. It’s outrageously well priced, and, crucially, it’s the perfect example of a tasting menu doing what it should: bringing the diner closer to the kitchen and the concept for having the choice taken out of their hands. A perfect trust exercise.

The hype is justified. Let Gray and Gray be the blueprint from here on out, and BOOooK NOW! 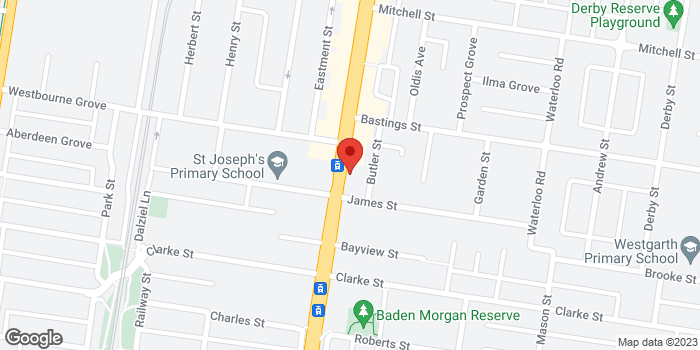