In Marios, as in Mario times two, not Mario’s – Marios’, if anything – we have a lot to be grateful for. In 1986, when Fitzroy was but a dusty café nullius ruled by barbarous feudal lords and hangry megafauna (presumably), Marios’ opening as the first cafe on Brunswick Street would usher in not only the dawn of the suburb’s vibrant café culture but as goes the fable, the dawn of ‘all-day breakfast’ in a city now defined by it.

The humble trat whose legacy alone guarantees a packed house every night is now a bona fide beacon of the inner north. People love Marios.

We know the story: two Marios bet it all on affordable-but-tableclothed Italian fare and won big. The lasagne’s reputation precedes it. The waitstaff wear waistcoats. Our Kylie visited once. Some other guy’s worked the pass since day dot and is getting on a bit.

Those who have grown up with Marios generally know what they’re setting out to achieve on any given visit. It’s usually pasta-related, and it’s often as simple as a stonking Bolognese and a post-work chinwag. Perhaps the puttanesca and a little solo social media. A celebratory T-Bone if you’ve been good. Less commonly, a three-course journey through the specials board and beyond, but hey, someone’s gotta do it.

It’s a heaving Wednesday night on our first visit – too packed to sit in the living room-cum-bordello front dining area. We’re ushered past the buzz and the people watching – a long-haired man in a No Fear hoodie gets his money’s worth from the bread; a woman on a phone call loses her slippery lemon wedge while squeezing it over her fish – and we take a seat in the back area. It’s a bit of a different story back here. Forensic downlights hit the lively photographic works that surround us. Above them is one of those crusty, dusty AC units that resemble an intruding whale sifting for krill. The photos will be replaced in a month by a new exhibition from another artist, as has been tradition since 1988. For now, they hang in hope, $1,800 price tags affixed in an $18 spaghetti bar. No word on the AC. Stevie Wonder’s Innervisions begins.

The menu changes bi-monthly, we’re told. Keen to flex on it some, we kick off with a thoroughly retro fisherman’s basket of fried prawns, calamari, crumbed fish, crumbed mussels and a bruschetta. Both big. Both do what they’re meant to. The calamari tastes under-seasoned, but who cares – it’s battered, it’s fried, it’s tender, our Morettis are cold, and like most, we’re here for the pasta and the lore, really.

Marios is still pumping out the same lasagne on which it has built its fortune –and which we’d vowed to order – but glamoured by the specials board, we plump for the swordfish spaghetti, which arrives fast and kindly portioned into two bowls for two diners, each a night’s food in itself. Paunchy morsels of soft, pan-fried fish, fried breadcrumbs, capers, tomatoes and plenty of olive oil combine for an endearing, if not prize-winning match for our equally serviceable bottle of 2017 Sereole Soave, one of the only Italian bottles available in a modest program of predominantly local drops.

We can’t help but feel we’ve missed a trick – maybe the raison d'être – in sitting beyond the atmosphere and neglecting the classics, but it’s mains time: a spatchcock from the specials board and the veal scallopine proffered by our waiter. Go on, then. Again, they’re huge and homey – emphasis on homey: the taut-skinned spatchcock (an entire small chicken splayed out like a skydiver) accompanied by crisp spuds and Whitlam-era peas; a somewhat agricultural scallopine stacked on asparagus and those same spuds. The veal is a bit tough, but it all works, particularly if you’re partial to a throwback feed, and it’s nothing if not comforting. But that lasagne...

On our second visit, we leap onto a street-facing stool at the window, order the lasagne, say yes to the bread and get to soaking in the favourable ambience and some of that premium Brunswick Street people-watching. It feels like a free upgrade to business class. The same laid back-but-intuitive waiter from our first visit presents our lasagne: a hulking great slice layered high off the plate, heavy with parmesan and hemmed in by a heady ruby-red sauce. The sheets seem overdone, but it doesn’t matter – the simple science of an unctuous ragu, tiered carbs and cheese prevails yet again.

Together with its convivial atmosphere, a kind of ritual revelry that speaks to its three-plus decades serving the people precisely what they want, it’s clear why this Fitzroy hall of famer is still packing out after all the years. Marios does the classics well, doesn’t go fixing things what ain’t broke, refuses to bend to the whims of an ever-evolving neighbourhood. Professional floor staff evoke a time when warm and unobtrusive service was the modus operandi – a drawcard as great as the food itself. Finally, as a solo diner, it’s tough to call to mind a more welcoming spot – which might be its finest quality. You’re never out of place at Marios. A true people’s champion. Just avoid sitting up the back. 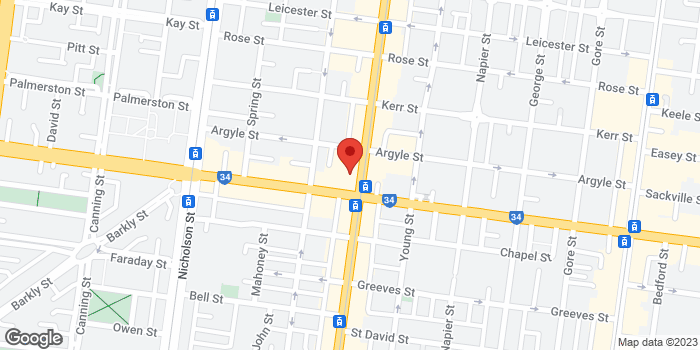