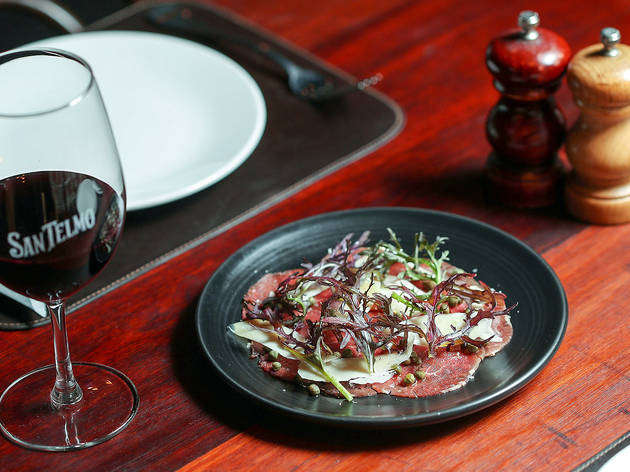 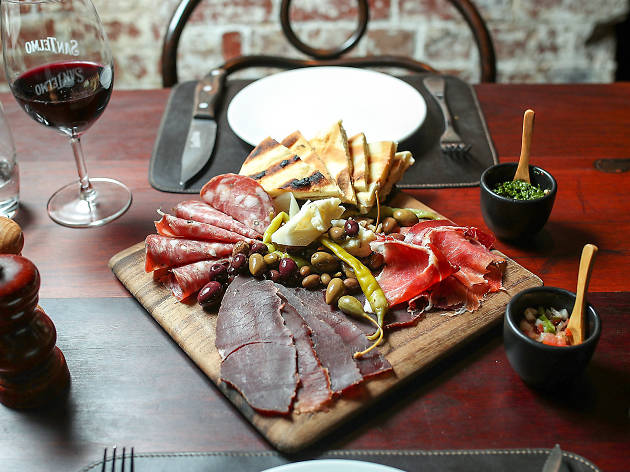 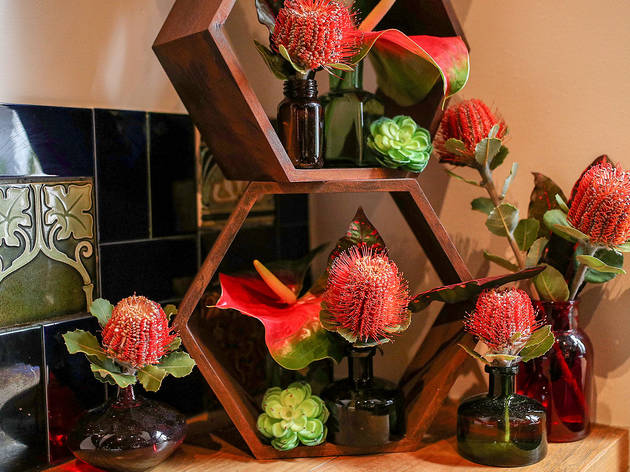 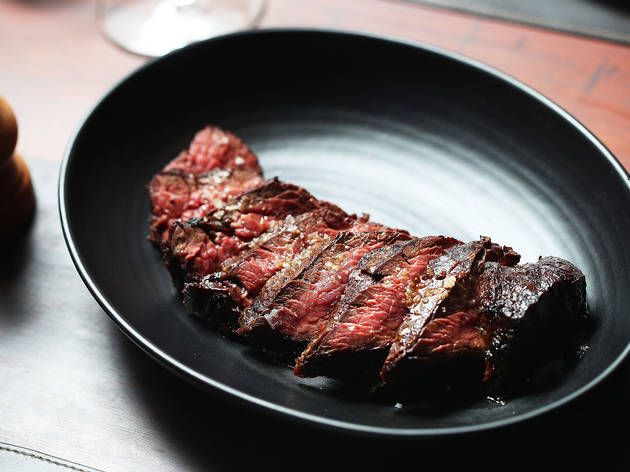 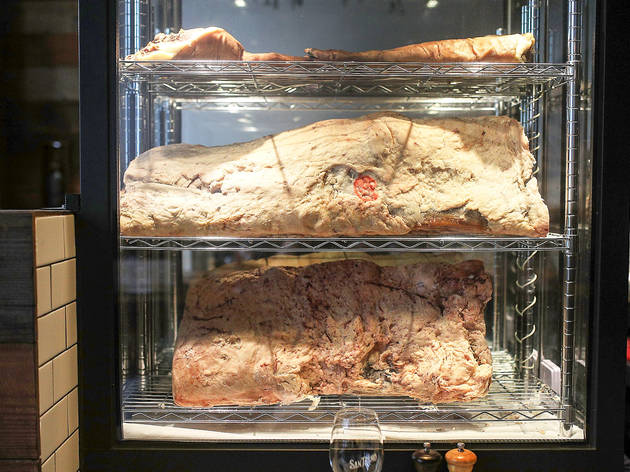 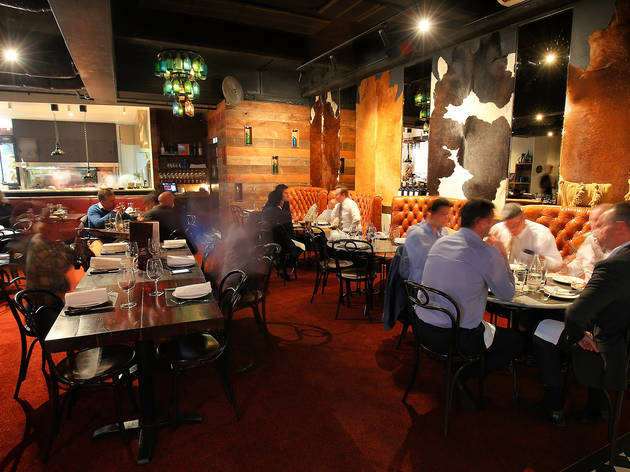 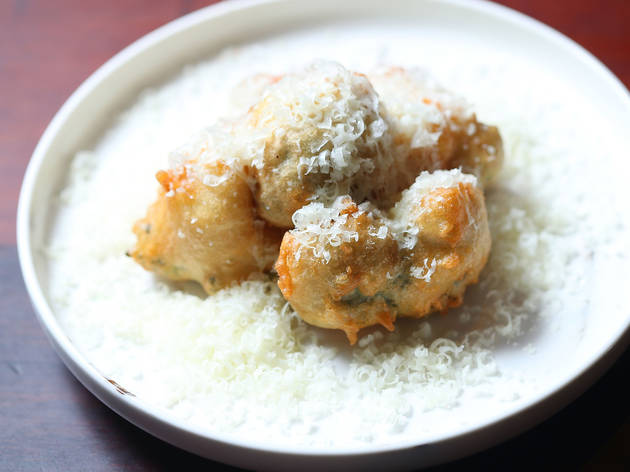 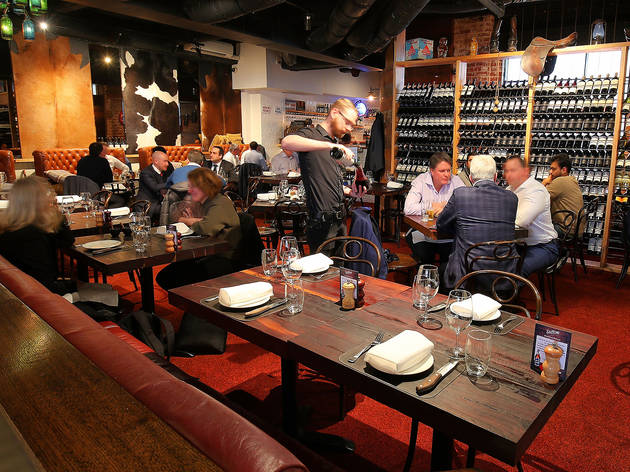 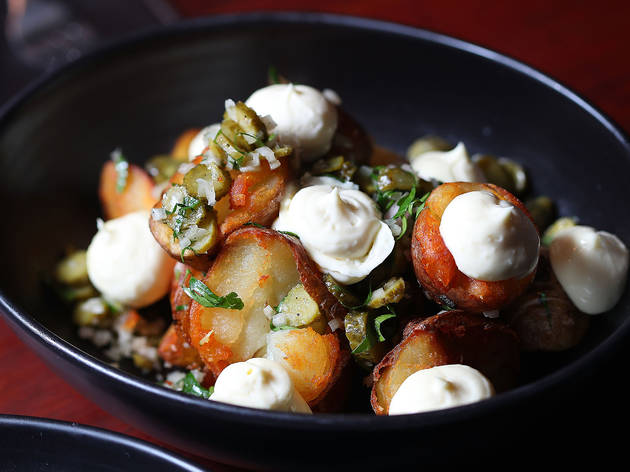 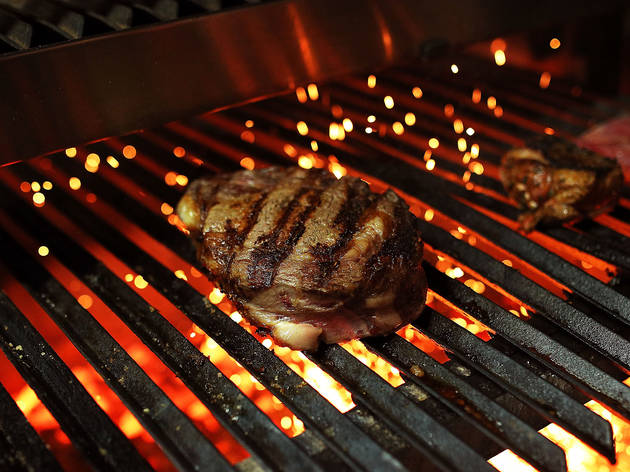 The people have spoken, and they are craving steak

Update: We attended this venue in September 2017 and some details may have altered since then.

San Telmo doesn’t muck around. This gaucho steakhouse run by a bunch of Melbourne hospo gringos lays its carnivorous scene at the entrance, where some impressive bits of cow sit dry ageing behind glass. It’s a memorable welcome, the voluptuously marbled fat a promise in writing of good things to come. Step further into this temple de carne in Melbourne’s parliament barrio and you’ll come face to face with the open kitchen and its centrepiece parilla, where glowing hot coals are shovelled around by a brow-mopping chef who really ought to be paid danger money.

The people have spoken, and the people want meat. They want meat in a lair that’s just like being transported to Buenos Aires, where cowhide in its various forms covers the menus and every other available surface. The people also want fried broccoli. The must-order dish at San Telmo is their contribution to the oeuvre known as good veg gone bad: florets of broccoli fried in batter until they scream for crunchy mercy and buried under a salty cheese blizzard of grated pecorino. You could easily sit down with a plate of these babies, a glass of something off the all-Argentinean wine list and call it lunch.

But there are more strings to the San Telmo bow than steak and fried broccoli. There’s a vitello tonnato playing tribute to the nation’s significant Italian population; tissue-fragile pieces of eye fillet, dabbed behind the ears with tuna mayo and given a classical kick with capers and parmesan. There’s a born-to-be-mild morcilla, sweetly fragrant rather than grunty. And fat polenta chips with chipotle mayo, of which no good can come except making you very, very happy.

The hanger steak is nigh on perfect, although let’s pause to acknowledge that at $40 for a dainty serve it’s a budget cut no more. The caramel crust is a tribute to the Maillard reaction, the blush pink flesh full of beefy flavour, the salt crystals on top all the garnish its needs. OK, so maybe a serve of the fried potatoes in a gloopy melange of cornichons and aioli could come along for the ride.

The people might politely suggest San Telmo could jazz up the music selection, because no one wants to hear the Gypsy Kings twice of an evening. They will be in mad agreement, however, that the quorum of Latin American staff are right to correct their pronunciation of parrilla. In fact, they are in mad agreement about San Telmo in general, which is why it’s the People’s Choice Award winner for 2017.