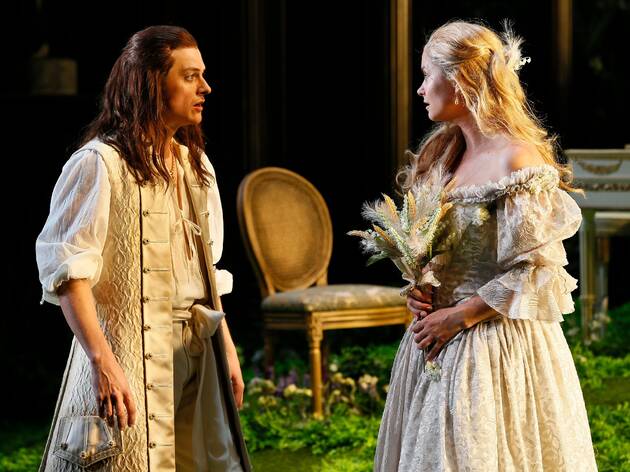 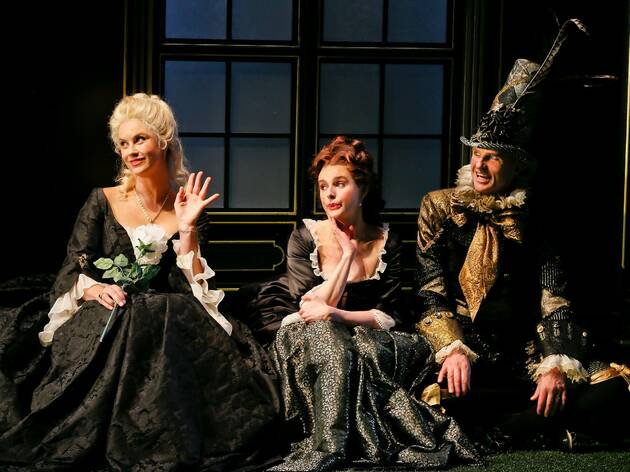 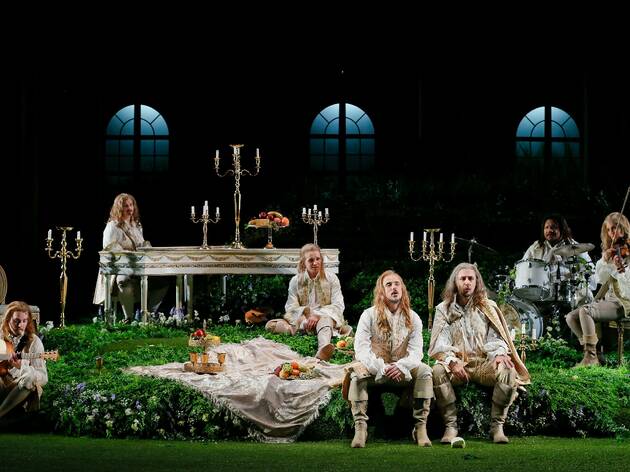 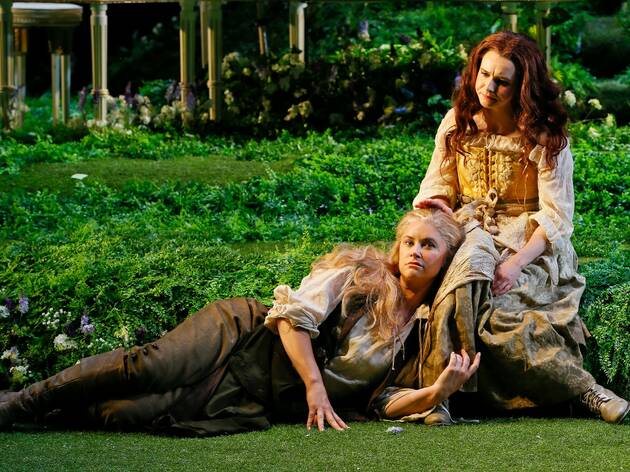 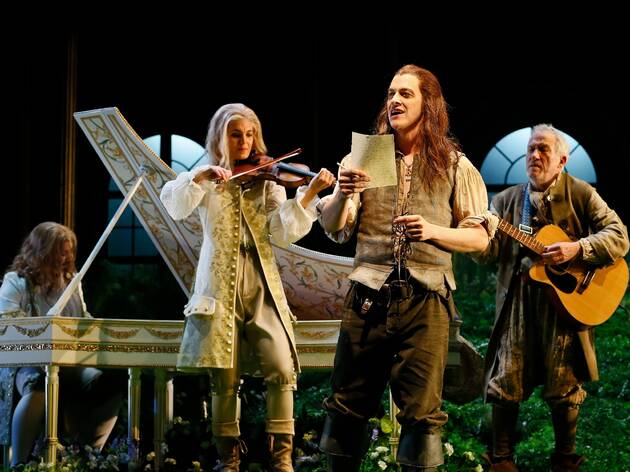 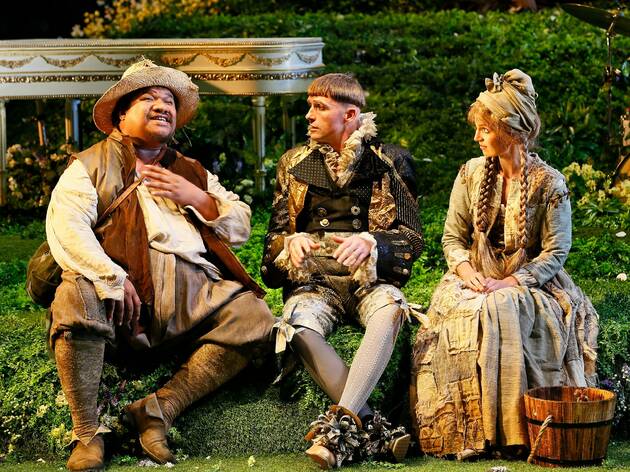 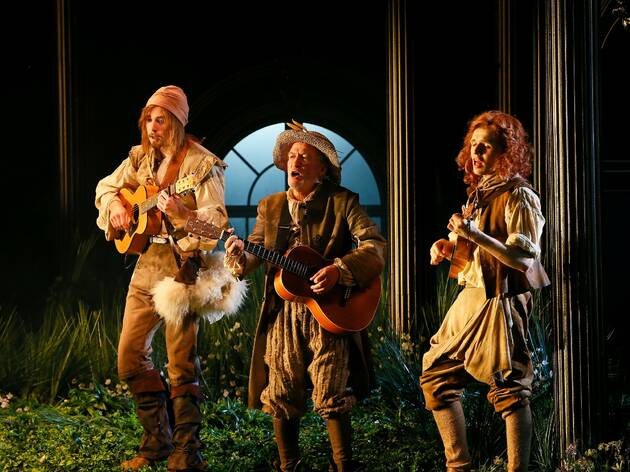 This gilded, musical production of As You Like It is the perfect antidote to Melbourne's lockdown

Although it was originally slated to premiere in late 2020, it feels entirely appropriate that As You Like It, Shakespeare’s buoyant romantic comedy, should be the production to reopen Melbourne Theatre Company post lockdown. The company couldn’t have planned it better if it had tried, with an unexpected easing of restrictions just hours before opening night meaning it would be the last performance requiring audiences to wear face masks. Coupled with a visually luscious set, earnest performances and a score of uplifting Shakespearean folk-pop from Kate Miller-Heidke and Keir Nuttall, Simon Phillips' As You Like It feels like theatre’s warm, golden dawn after a stormy grey winter.

Gold permeates the entirety of As You Like It without feeling ostentatious, all thanks to Alicia Clements’ set and costume design. From the earliest moments, gilded winks are thrown at the audience through golden highlights on the columns and in the sombre, 18th century-inspired costumes of Duke Frederick's usurped court. This dark set and staging of the first act serves to provide a magnificent contrast when our heroine Rosalind (Christie Whelan Browne) and cousin Celia (Georgia Flood) are exiled from court and flee to the bucolic Forest of Arden. When the courtly setting lifts to reveal a verdant and sublime hillside that feels ripped straight from Rupert Bunny’s ‘Pastoral’, audible gasps and applause escape from the audience – punctuated by the first of the band’s first of many overtures.

It’s not the first time Phillips has teamed up with composers Miller-Heidke and Nuttall, with the three of them having collaborated on Twelfth Night in 2018. In As You Like It, their score gently guides the audience’s emotions through the play, encouraging elation, humour and sorrow. The performance has famously always had music woven through it, but Miller-Heidke and Nuttall have taken those original lyrics and infused them with a bright, clear bolt of modern pop – the score feels simultaneously like it’s from 1599 and 2021. It’s aided in no small part by the diegetic band (comprising Jack Green, Xani Kolac, Richard Sergeant, Shivantha Wijesinha and Richard Piper), who perform on acoustic guitars, violins, simple drums and a piano more attuned to a harpsichord.

Whelan Browne is an effervescent force as Rosalind, channeling first the character’s giddy, schoolgirl excitement for love interest Orlando, then a headstrong make-do attitude in exile. But it’s as Ganymede, Rosalind’s gender-swapped shepherd alter ego, where Whelan Browne really excels, presenting a bubbling, mischievous character that delights in the playful deception of Orlando. As Orlando, James Mackay holds his own against Whelan Browne’s unstoppable Rosalind, carrying the character with a sincere tenderness and quiet nobility. The chemistry between the two Shakespearean lovers creates a collective frisson in the audience – Mackay was not originally cast as Orlando in the intended 2020 production of As You Like It, but it’s hard to imagine anyone else in the role.

As Rosalind’s equally vivacious cousin Celia, Georgia Flood is a delight, charming with a sweet, occasionally mildly neurotic manner and absolutely belting out her solo with the clarity of a bell. Together with Whelan Browne, the pair are convincing as relations, portraying a ride-or-die, inseparable friendship. Daniel Frederiksen is appropriately ridiculous as the jester Touchstone (with sharp comic timing to boot), but it’s Tim Walter’s exiled nobleman Jacques who really commands every scene he’s in with a wise, tranquil melancholy. Walter manages Jacques with a sort of loping grace, sauntering through Arden to interject musings on life and love as a sort of cerebral forest spirit before signing off the performance with his arresting contribution to the closing song.

“All the world’s a stage”, and MTC’s reopening performance of As You Like It certainly cuts a grand one.