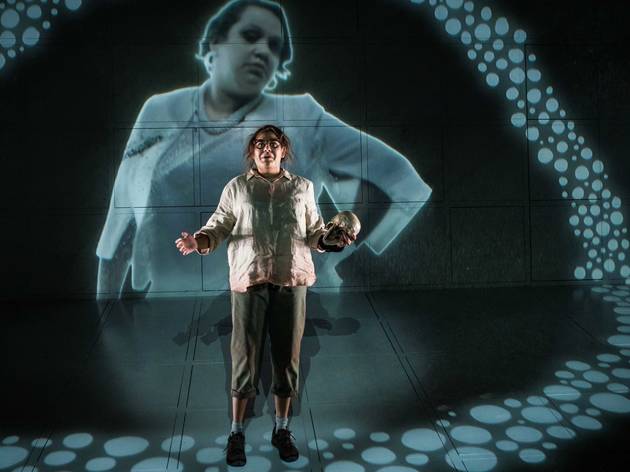 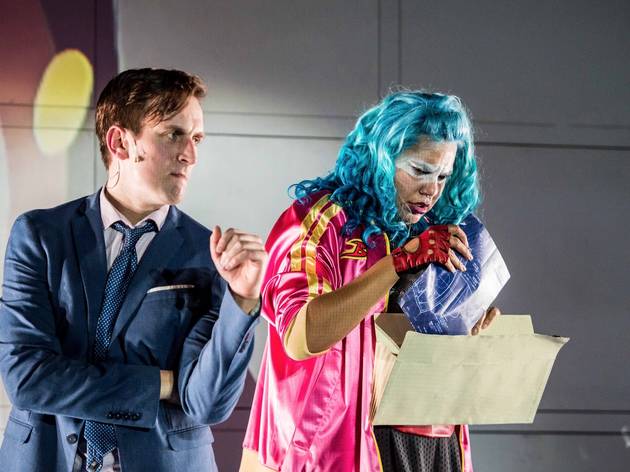 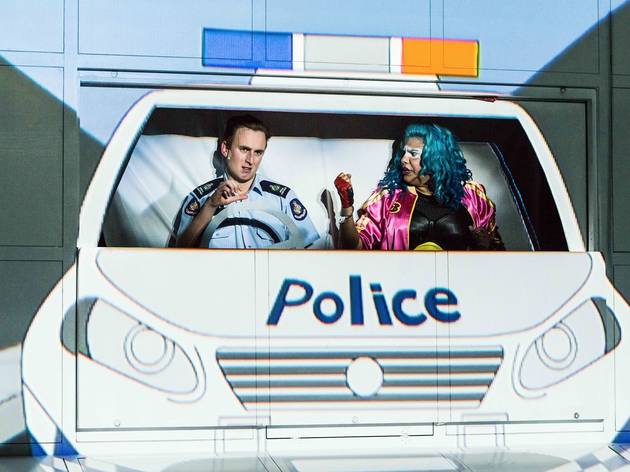 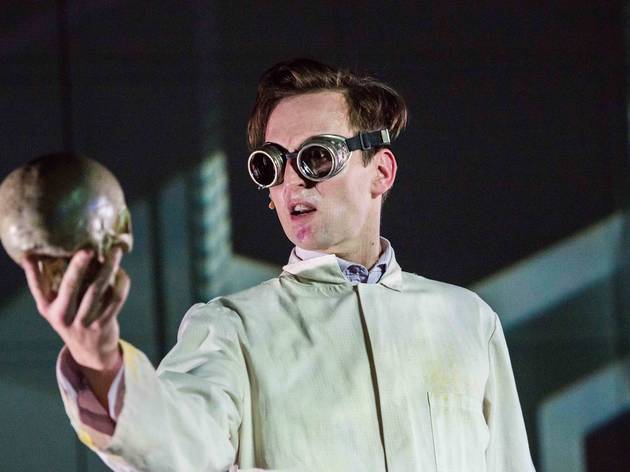 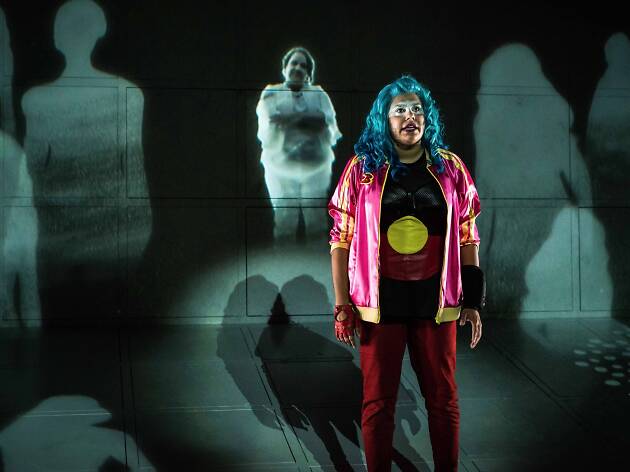 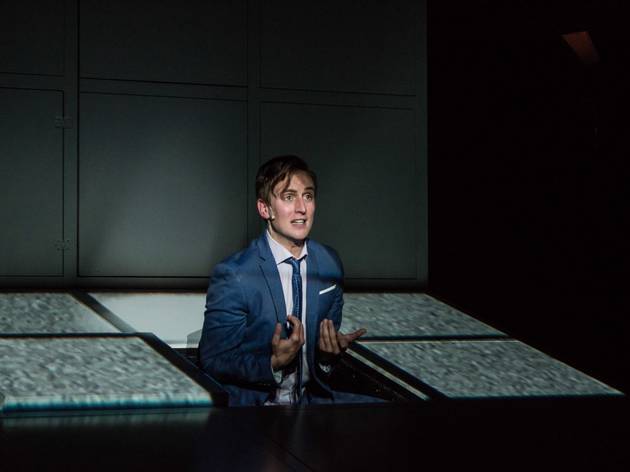 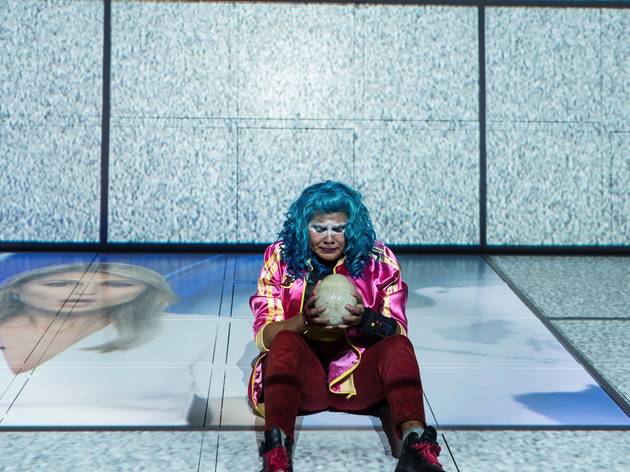 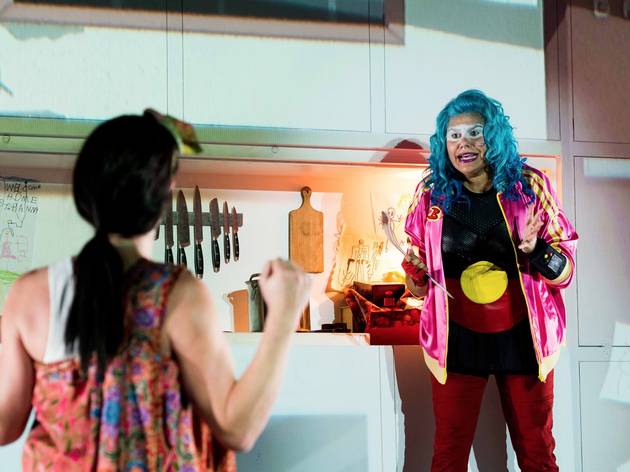 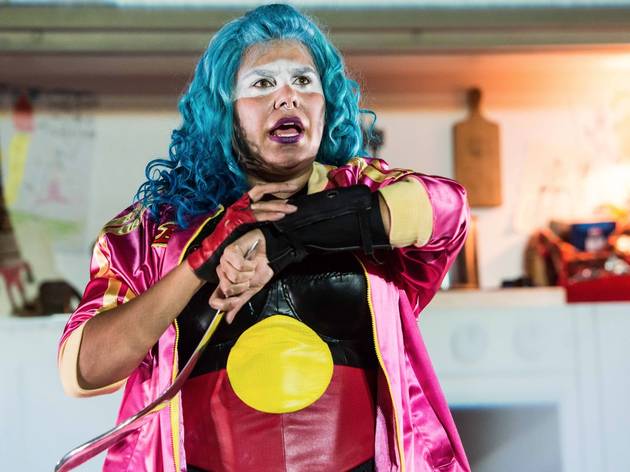 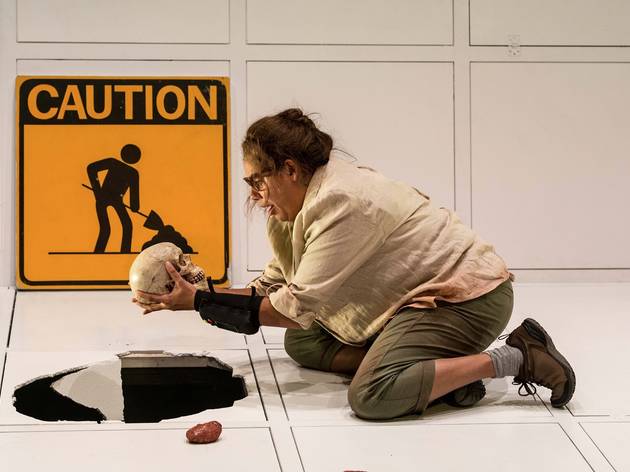 Blackie Blackie Brown was such an epic hit in its first Melbourne season, Malthouse is bringing it back for a short stint in 2019. Read our four-star review of the 2018 Malthouse season below.

The revenge fantasy is alive and well, and it’s putting down roots at the Malthouse’s Beckett Theatre for the month of July. It can only be a month, because that’s how long super heroine Blackie Blackie Brown has to complete her deadly mission: to wipe out all 400 of her victims, the descendants of those who brutally murdered her great great grandmother. That’s a lot of killing in a short space of time. But let’s face it, in this country it’s hardly unprecedented; it’s almost a piece of cake.

Playwright Nakkiah Lui is something of a comedic sensation – and audiences who’ve seen previous works such as Blak Cabaret or ABC’s Black Comedy will have some idea of what to expect – but Blackie Blackie Brown represents a solidification of her talent. It has an absolutely genius conceit, an in-built entertainment generator, but it’s also expertly crafted and forensic in its approach to its satirical targets. This is a playwright who knows precisely what she wants to say and how she wants to say it.

Jacqueline Brown (Dalara Williams) is an Indigenous archeologist, working for a mining company who wants the all-clear to exploit the local land for profit. When she discovers a human skull that opens her to her heritage, it’s both devastating and empowering. The skull gives her uncanny powers, but it extracts a deadly price too. Jacqueline will have to forgo her life of acquiescence and transform into an agent of retribution and revenge. The death of innocence is something she embraces, but the death of innocents might be harder to bare.

Revenge fantasies can be deliciously entertaining, especially if the victims have it coming. In this play, some do and some don’t, which complicates and deepens the questions at the heart of this piece. And all of them are played by Ash Flanders, who has himself become something of a queer sensation as the co-founder, along with the director Declan Greene, of Sisters Grimm. He’s magnificent in this; whether he’s playing camp or brutal, slimy or subjugated, he’s determinedly performative, and the perfect foil for Williams’ openhearted Angel of Death. Williams took over the role at short notice from Megan Wilding, and she’s quite wonderful. As Jacqueline, she has that twitchy naïvety that recalls Michelle Pfeiffer’s Selina Kyle in Batman Returns, but then her transformation into Blackie is surprisingly nuanced and ambivalent. She’s ostensibly a reluctant killer, and brings a disarming sweetness to the task.

Technically, the production is probably the most ambitious the Beckett Theatre has ever seen; so much so, the opening night performance ground to a halt just after the midway point. The set (Elizabeth Gadsby) is a raked white floor that meets a white wall, and would be considered minimalism if it weren’t for the secret compartments and the absolutely spectacular animation and video design by Melbourne outfit Oh Yeah Wow. Based on Emily Johnson’s witty concept art, the visuals are a Pop Art dream, loud and colourful and heaps of fun.

In fact, for a play that deals quite directly with the shocking violence against, and displacement of, Indigenous Australians and the aftermath of grief and resentment that naturally follows, Blackie Blackie Brown is a riot. Lui doesn’t shy away from a frank representation of our history – indeed, every kill that Blackie makes is an echo of its brutality – but she sees a way forward, one that Blackie’s great great grandmother can’t. It might tip the play into a kind of agitprop, but it’s so knowing and generous that the effect is almost joyous.

John Howard once railed against a “black armband view of history” in this country, which he saw as too focused on the dark past of European settlement and not on the, I don’t know, apocryphal good shit white people have done since then. Nakkiah Lui shows us that black arm band isn’t just black; it’s a whole rainbow of pissed off, and it’s searingly relevant to our contemporary idea of what this country can be. That it’s packaged in a bewilderingly inventive, consistently hilarious thrill ride of death seems like icing on the cake.