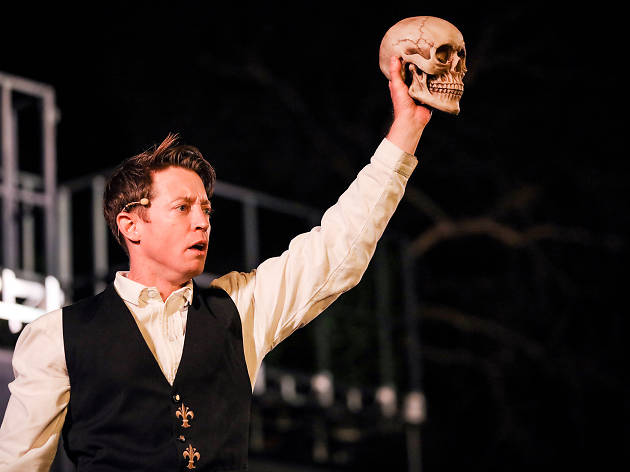 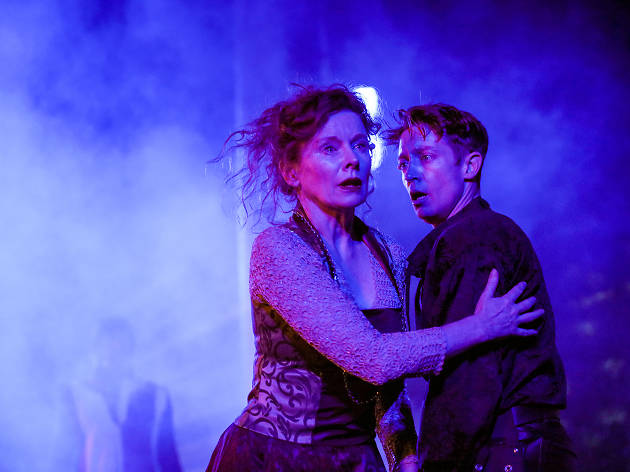 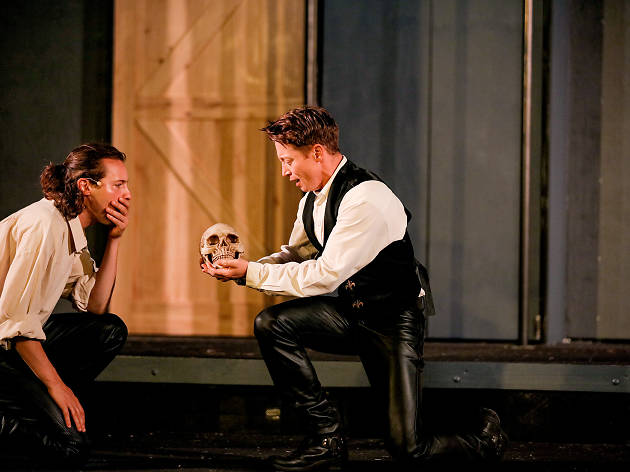 When you hear that an outdoor Shakespeare company is mounting Hamlet, you approach with caution. There’s virtually no chance the play will be performed without massive cuts to the text, for a start; you can’t have people sitting outside for the four hours it would take to play it in full. And the nature of outdoor performance means you’d expect to lose a lot of the nuance and subtlety. Things tend to be played “big” when played against high winds, car honks and the squeak of fruit bats. But Glenn Elston’s Hamlet is something of a joyous surprise, as clear and as moving as any you could hope for. It’s certainly the best Melbourne has seen in years.

It has a wonderful and winning lead in Andre de Vanny. He’s hardly a household name, but he’s been quietly building a seriously impressive body of work in this city, and his royal Dane feels like a culmination of his talents. Mercurial without being fidgety, melancholy without being dour, he manages the transcending mutations of the role so naturally that, in Harold Bloom’s words, “the abyss between playing someone and being someone has been bridged”. We don’t get the sense of an actor climbing a mountain in front of us, which can often be the case, because he makes it look so effortless, a perfect extension of the self.

The supporting cast are to die for (which of course most of them do). Alison Whyte is a magnificent Gertrude, her clarity of purpose snagging on the barely suppressed guilt, tripping her into the light of revelation. She makes a mockery of the idea that the part is underwritten. Mark Wilson (who replaced Greg Stone and will in turn be replaced by Peter Houghton) is a seedy, paranoid Claudius, hinting at the villainy typical of the revenge tragedies Hamlet surpasses, but also snarlingly credible as the ultimate political tyrant. Brian Lipson is pitch perfect as the doltish blowhard Polonius, bringing genuine warmth to his paternal side without losing any of the character’s myopic stupidity. And Emily Goddard is a sublime Ophelia, her confusion and hurt sliding alarmingly into bitter madness and reproach.

Elston directs with a sureness of touch and rapier-like clarity that I’ve rarely seen from him. From its opening seconds, the play is utterly riveting, tense and inexorable, without a hint of the shagginess or shameless mugging you often see in his productions. The interactions with the audience are judicious too, with only Hamlet (and Ophelia in her madness) venturing out beyond the stage; ingenious given that these two characters are the only ones who seem to know they’re in a play. The question of Hamlet’s madness is perhaps too easily solved, with no doubt about his “antic disposition” admitted, although this does strengthen the idea of Hamlet as director.

The one aspect of the play that is forsaken altogether is the Fortinbras subplot. That wonderful moment when the great Norwegian heir apparent strides into the Danish Court of Corpses, and looks around at the carnage with horror, is cut along with most references to the wider political context of the play. This seriously undermines the meaning of the work, the meaning in fact of Hamlet himself. Without an alternative prince waiting in the wings, Hamlet’s loquacious inaction never quite achieves its full tragic resonance. It’s a key note that remains unsounded.

Thankfully, what remains is so good the average punter shouldn’t need to worry about what they’re missing. We still get “carnal, bloody, and unnatural acts” aplenty, in a production stylishly designed  by Elston himself. The costumes (Karla Erenbots) are beautifully judged, suggestive of period but not slavishly tied to it. And the incidental music (Paul Norton) is restrained but atmospheric.

No one production of Hamlet can ever contain Hamlet himself, who remains the truly central dramatic role because he fringes the “undiscovered country from whose bourn no traveller returns”. But when the cast are this fine, the storytelling is this clear, and the weather is just right, there’s something more than a little transcendent about the death of the noble prince under the watchful gaze of the stars.