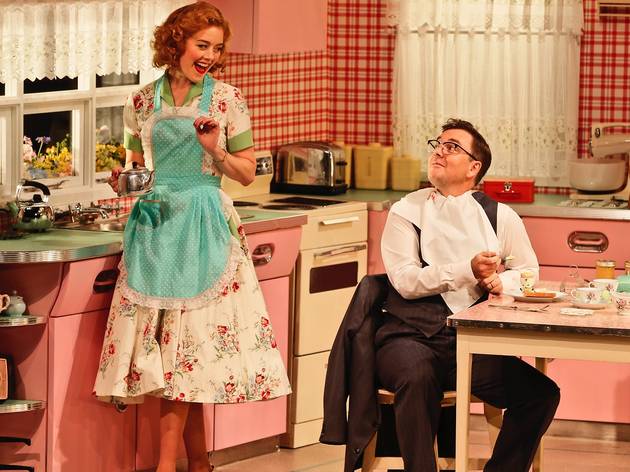 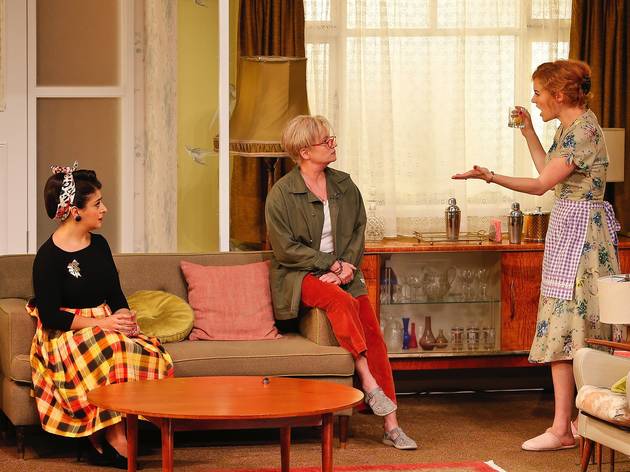 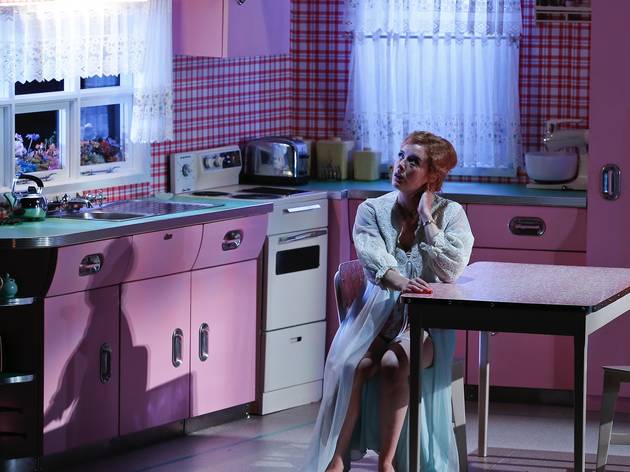 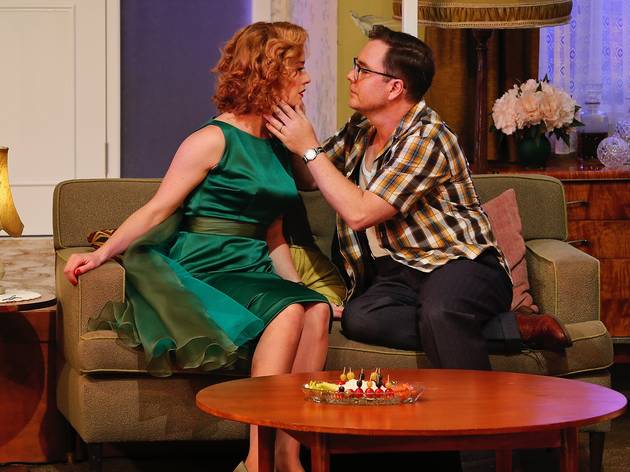 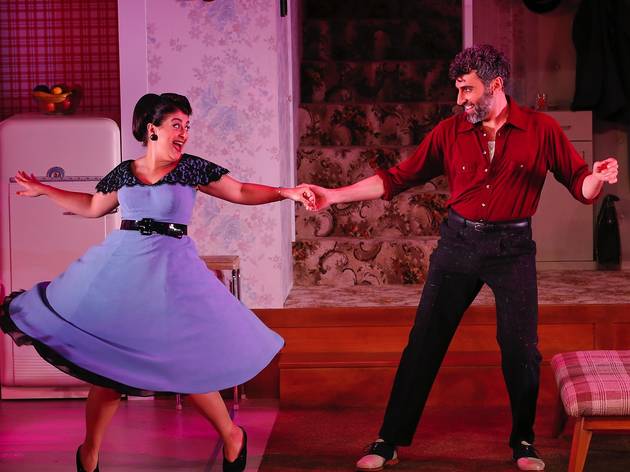 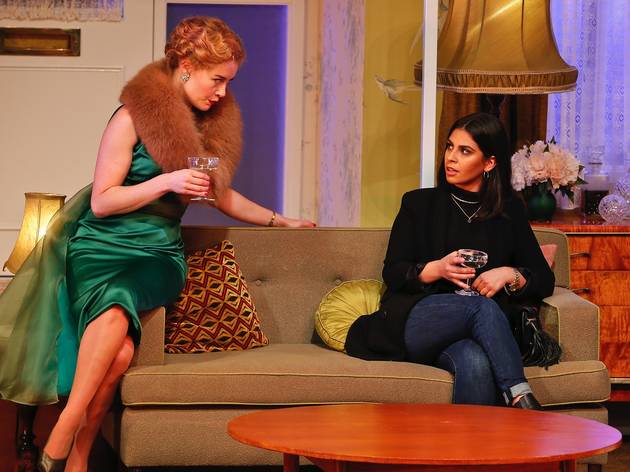 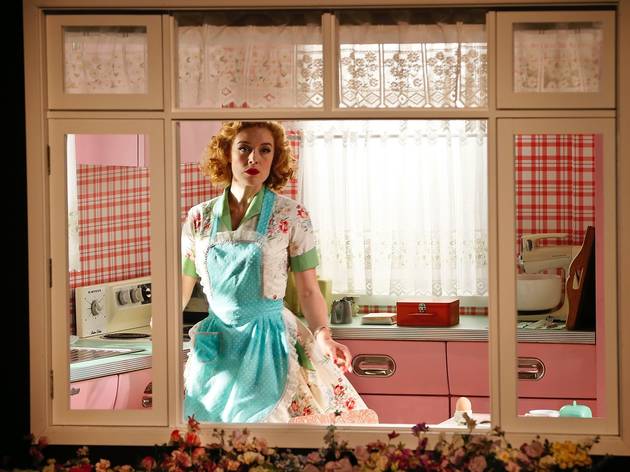 What is it about middlebrow English plays that so appeals to Melbourne Theatre Company, especially at the top end of its seasons? In the last few years, we’ve had Jumpy and Lady in the Van – both depressing in their stolidness – and now we get Laura Wade’s Home, I’m Darling. Surely, you want a firecracker of a play to launch the year, to get your audience excited by the spark of creativity? This play is like a wet match: it’s never going to light.

The conceit itself is intriguing: Judy (Nikki Shiels) is married to Johnny (Toby Truslove) and three years ago they decided to live their lives as if they were in the ’50s. The home, the decor, the clothes, and most controversially, the gender roles. Judy wants to be the perfect housewife, so she takes a redundancy, dons an apron and starts cleaning.

For a while, Johnny likes it like this, his meals cooked, his drink prepared, his slippers ready. It’s only when the real world begins to intrude, when the couple’s ’50s-loving mates Fran (Susie Youssef) and Marcus (Peter Paltos) profess doubts, and when Johnny’s new boss, Alex (Izabella Yena), comes round for cocktails, that he gets cold feet. The price, both financially and socially, becomes too much to bear. Judy’s mother, Sylvia (Jane Turner), a former commune hippy and firebrand feminist, throws potshots from the bleachers.

Wade folds a lot of issues into the mix – generation gap stuff, and some poorly judged late-in-the-game sexual harassment – but the cake that comes out of the oven is oddly tasteless. Why does Judy cling so desperately to such an insane concept? Why does Johnny blithely tag along? Why does it take three years for her mother to blow open the lunacy of nostalgia for a terrible, repressive period in history? Home, I’m Darling has no answers and doesn’t seem particularly interested in the questions.

Director Sarah Goodes does a remarkable job bringing some cohesion and verisimilitude to a work that has neither. She is blessed with a star in Shiels, the kind of performer who inflects even the most tedious actions with a potency that makes them feel credible. Here she is luminous and edgy, shifting gears in a flash without ever losing our sympathy. The play requires impossible psychologies from her, but she almost makes it look real.

Truslove is a beautiful foil, confused and compromised, but pulsing with dignity and compassion. Turner is wonderfully restrained in her first scene and makes a minor meal of her major speech denouncing revisionism and the lure of fantasy. Paltos is suitably smarmy and slimy in a stupid part, and Youssef and Yena make the most of underwritten female counterparts. But the cast and the director feel like they’re involved in a Sisyphean task, pushing shit up hill.

It’s all such a waste, because the concept could have yielded something far darker and deeper, and, yes, funnier. The house as a surreal repository for our dreams and nightmares is one that pre-dated the ’50s (it’s a key concept in Bréton and Bachelard, for instance), but you could argue that the fetishism of domesticity found its apotheosis in the post-war period. Judy’s retreat into this fantasy world could have symbolised a true agoraphobic response to our current fears, a rational regression in the face of madness. But it’s Wade who retreats from anything complex, and the play fades into platitude and sentimentality in the end, content to say nothing.

The program notes talk a lot about feminism and the Cult of Domesticity and hopes that we won’t judge Judy too harshly for wanting to simplify her life. But the play never really affords the character a coherent game plan, so when it starts to fray, the results feel increasingly ludicrous. The stakes are so low and the motivations so petty that it’s hard to commit to the central dilemma and impossible to care when it all falls apart. I kept wanting the house to start attacking Judy and Johnny, to push back like a domestic slave rebelling against its masters. That would have been surreal. It would have been funny. It would have been dangerous. It would have been the opposite of Home, I’m Darling.