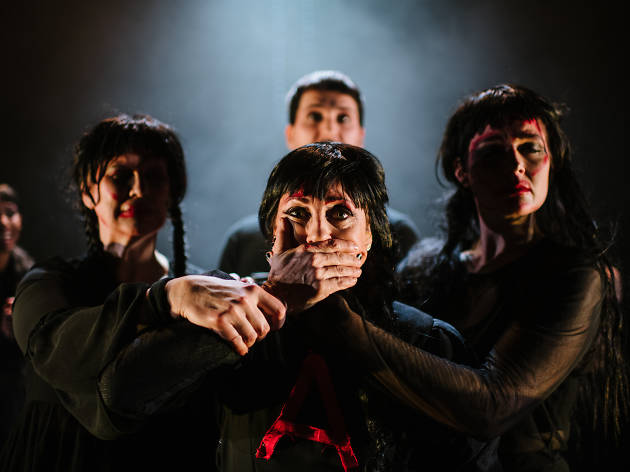 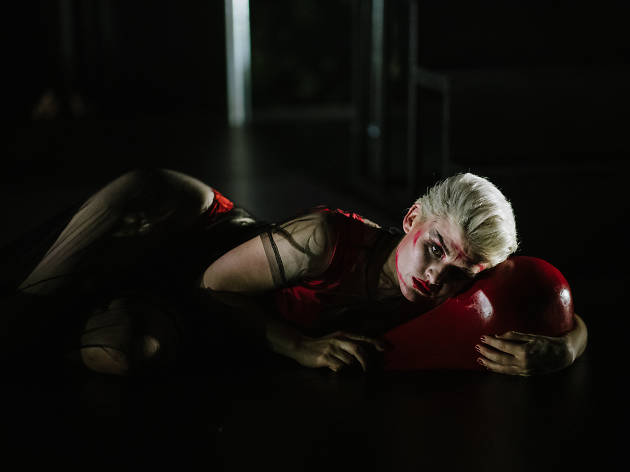 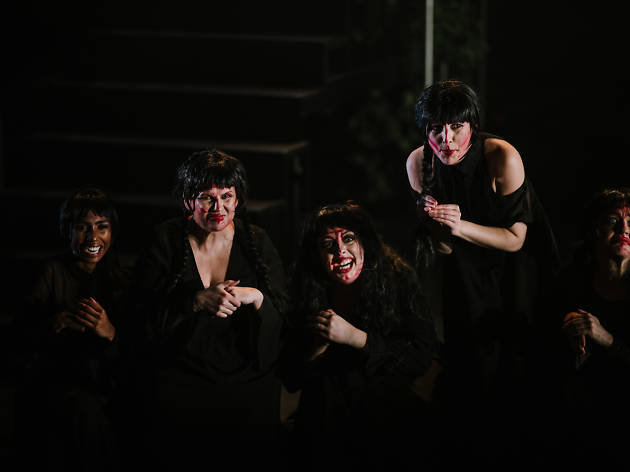 This provocative new play is inspired by The Scarlet Letter

It is such a great title. And in fact, the relocated Brisbane experimental theatre company the Danger Ensemble are good at titles. Their last show in this city was The Hamlet Apocalypse. It was a show that delivered what it said on the packet, and in some ways you could argue that Let Men Tremble does the same. Although just how much trembling happens will depend less on your gender and more on your stamina and proclivities: if unrelentingly declamatory agitprop theatre isn’t your thing, you may leave Theatre Works in a jelly-like state.

Certainly, this is a deliberately uncompromising work. It positions itself not as an adaptation of but a freewheeling response to Nathaniel Hawthorne’s 1850 novel of shame and sin, The Scarlet Letter. Thus we get a telling of sorts of the story of Hester Prynne; her pregnancy out of wedlock, her refusal to name the father, her attempts to keep her child. We get the oppressive theocratic society in which she lives, and the insistent dogma spewed forth by men of the cloth. We get suspicious neighbours, and cries of witchcraft and fevered damnation. We get the point.

Of course, the Danger Ensemble have no intention of telling the story of The Scarlet Letter, just as they had no intention of telling the story of Hamlet; if you’re looking for faithful adaptations of those works, you’re looking in the wrong place. This company are far more interested in the now, in the actors who inhabit the space and the narratives that come, seemingly unbidden, from inside them. Thus we get individual monologues so raw they can only be autobiographical, of female actors crushingly compromised by societal expectations, by notions of beauty and femininity. They are like the cracking of the cultural carapace.

But what exactly is Let Men Tremble’s relationship to Hawthorne’s text, and what does director Stephen Mitchell Wright want us to think about the novel? The play spends its first third ramming religious doggerel down our throats in ways that Hawthorne would have found ludicrous. The women are depicted as bestial hounds of theology and the priests as salivating sadists, which might remind us of the films of Ken Russell, but gives no insight whatsoever into the kind of insular, God-fearing sectarian communities Hawthorne is interrogating. Eventually, Wright brings Hawthorne directly into the work by decrying the author's misogyny, even though Prynne actively represents female empowerment in the context of the novel. She doesn't “stay silent to protect a man”, as Wright would have it. She chooses not to damn Dinsdale because it isn't her sin to confess. It's not clear he's understood the novel.

Let Men Tremble often looks stunning, and there are several arresting images that point to a better, more nuanced show. It is also clear, in ways that often aren’t so apparent, that the actors are fully committed, emotionally and spiritually, to the ideas at work. Ben Hughes’ lighting design, and Mitchell’s contributions to set and costume, are often ingenious, with those ecclesiastic reds and blacks dripping with menace. As a spectacle, it’s dazzling.

But as a play, it often feels unendurable. Wright has the men speak simultaneously, which is possibly meant to show an inability for independent thought but rapidly becomes irritating. The women speak in this forced, declamatory style that might reflect their constricted social positions but also robs them of agency and interest. Actors tell us they are sick of doing this and want to break free of the chains of Hawthorne’s narrative, but then offer no new stories in its place. The adage of show, not tell is completely reversed.

The play’s structure and intellectual arguments finally dissolve into a series of lists, a sure sign of rhetorical failure. We get lists of “bad men” and “cool women” – as if by rattling off names of pop culture clichés the show can gain some reflected gravitas – that culminates in a list of murdered women, called out at random. Soon it becomes “unnamed, anonymous, unnamed”. And at that, we all should tremble.