Much Ado About Nothing review 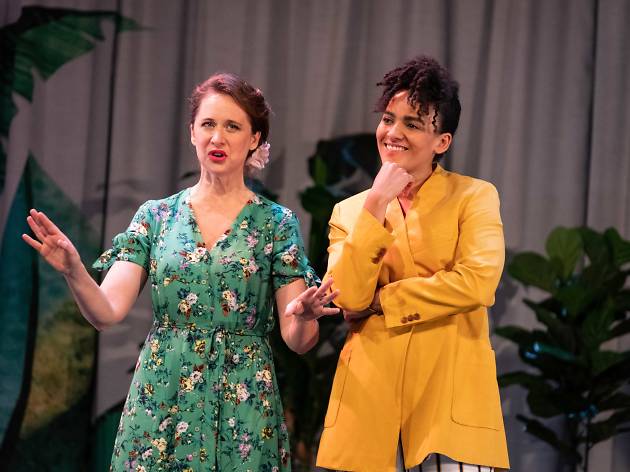 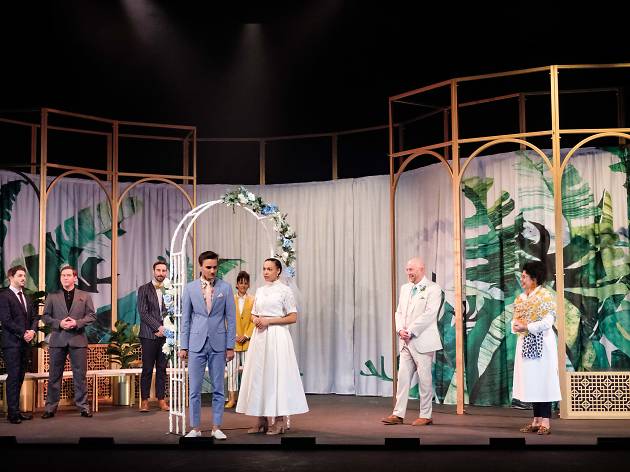 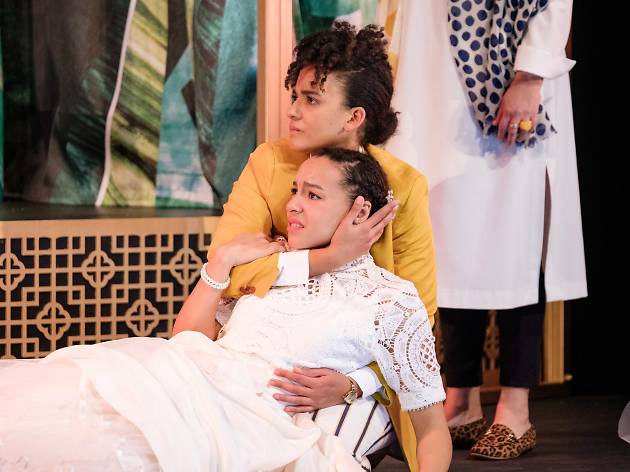 Love, war, life and death: Much Ado About Nothing deals in timeless themes. But in its deeper explorations of human attraction, the tenuousness of trust, and the intimate, internal battle between head and heart, it’s also a play teeming with suppler topical possibilities. These nuances, however, are by no means guaranteed; a director needs to seek them out. James Evans’ glossy new production for Bell Shakespeare happily offers a light and bougie rom-com, but a series of confusing choices deprive this staging of a more finessed and layered meaning.

Shakespeare’s plays are so often commandeered as vehicles for social and cultural musings, it’s an unusual surprise to see a production that so willingly avoids them. Especially since Much Ado seems so perfectly primed to explore hot-button issues like sexual politics and gender equality. The central plot sees a young woman, Hero (Vivienne Awosoga), humiliated and rejected when her fiancé Claudio (Will McDonald) is tricked into believing she has been unfaithful, a smear her father also accepts despite his daughter’s pleas.

This production, however, has no such designs on political commentary. Instead, it leans into the subplot and the play’s more famous couple, Beatrice and Benedick. Two sides of the same coin, their smart-alec sparring seems to profess a mutual disdain, only for this war of wits to become the foundation of their romantic connection. It’s certainly a valid approach, given that these roles are dripping with sumptuous language and delicious repartee. But there’s a delicate balance in the characterisations of this pair that go beyond the dazzling dialogue, and here, that careful dynamic feels off-kilter.

Rather than being intellectual equals who each give as good as they get, Beatrice (Zindzi Okenyo) comes off as the cerebral superior, whereas Benedick (Duncan Ragg) is played far more for laughs as a charming yet befuddled fop. Not that Ragg’s or Okenyo’s performances aren’t subjectively accomplished. Benedick is deeply endearing in his own goofy, self-conscious way, and Beatrice appears wonderfully fulfilled in her confidence and agency. But with their innate similarities so upended and their manifest differences so heavily underlined, the love they eventually admit to makes little sense.

If there is any political undertow at work, Evans’ tack seems to be to emphasise the play’s feminist resonances by making the male characters largely unlikable and gender swapping those roles that can’t be made too odious. If this is so, it’s the subtlest of winks to the zeitgeist and creates more issues than it solves. Most problematic are McDonald’s Claudio and Danny Ball’s Don Pedro, the military leader and sometime matchmaker. Far from being men of noble rank, their boysy banter and OTT machismo make both characters seem entitled, childish and looking for conflict. The friction this creates between their behaviours and their actions leads to moments when even the actors appear unconvinced by their motivations, dutifully going through the motions rather than delivering an authentically realised account.

Elements of the production’s broader architecture also suffer from jarring miscalculations. Evans begins the play with its final scene, which is not only disorienting but also, out of context and with no theatrical device to frame it, only understood by those who already know the text. Pip Runciman’s set and costumes are another head-scratcher. Odd design references – the set has a vaguely Great Gatsby Art Deco vibe with miscellaneous sub-tropical accents, while the costumes wouldn't look out of place on a yacht in the Med – offer no obvious resonance with any other part of the show. There are some pleasing musical interludes that add welcome vibrancy to the proceedings, as does the comic relief of Mandy Bishop’s delightfully daft Dogberry. But in this mish-mashed universe, these moments also feel somehow out of place, unexpectedly stylised and hyper-theatrical.

If Evans’ mission was to stay true to this play’s rom-com spirit, without any didactic distractions, there’s no denying that there is both romance and comedy in plentiful supply here, just of a variety that seems perfunctory. But perhaps there is something to be said for the simplicity of this production. As it embarks on a mammoth national tour (visiting 27 venues in total) a show that opts for uncluttered accessibility over a more layered reading may speak to a wider audience. And yet, the theatre is a space of such potential power, offering gentle entertainment instead of a howl for justice seems like a missed opportunity.