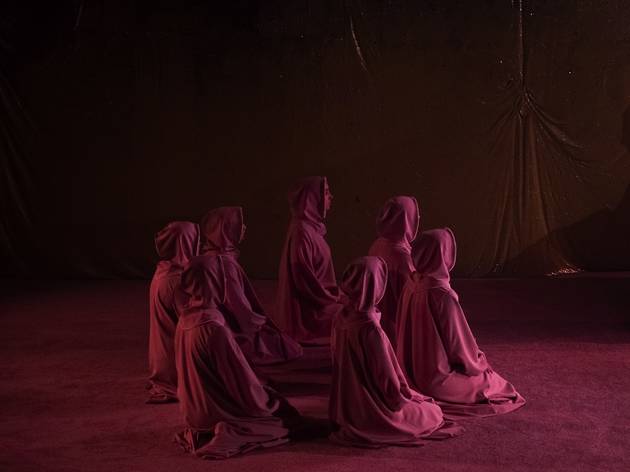 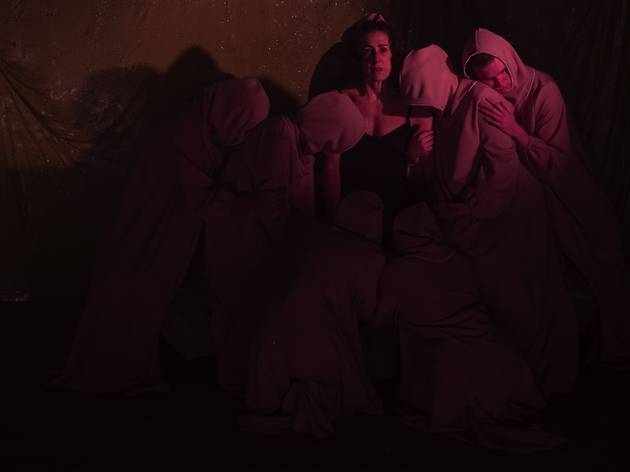 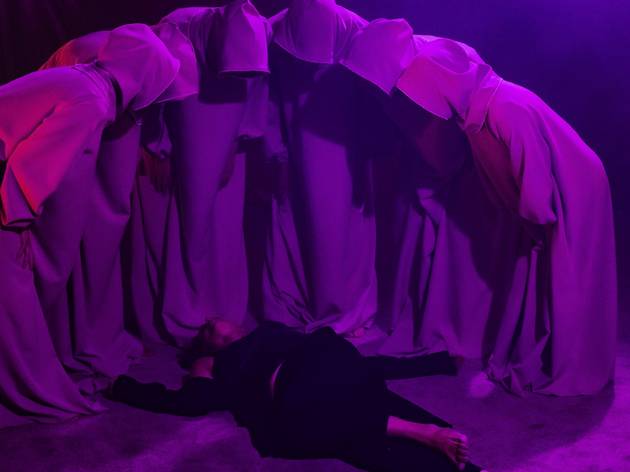 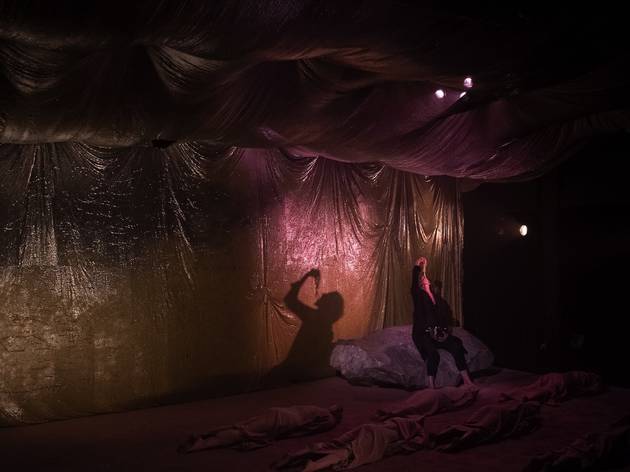 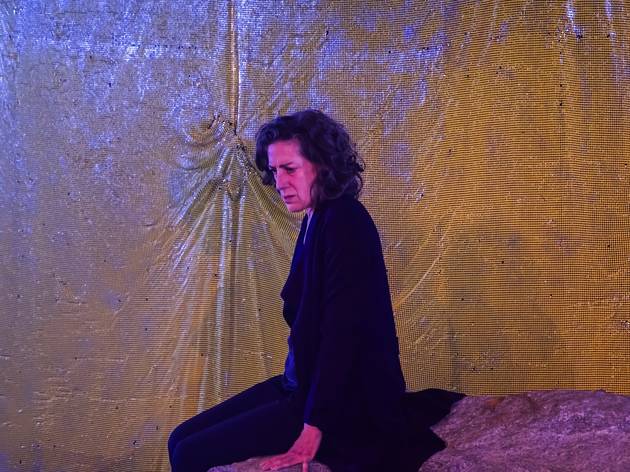 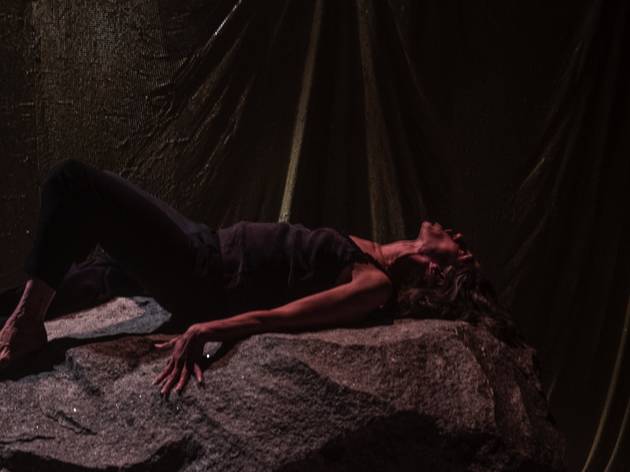 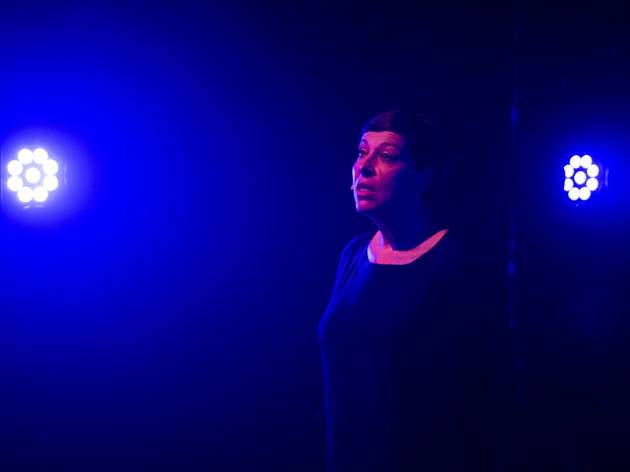 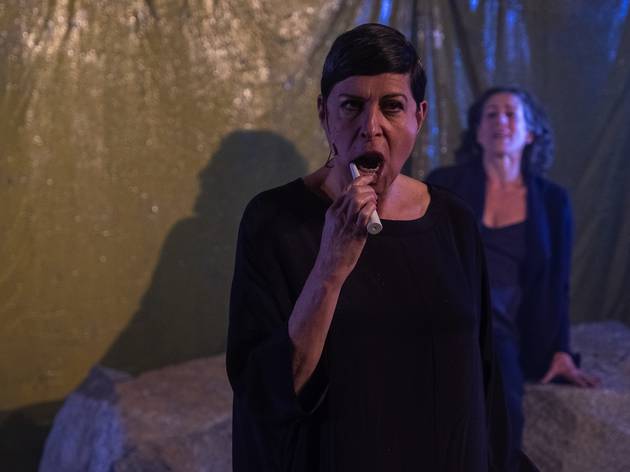 The lights come up on a distinctly domestic space, in so far as it’s carpeted. A large piece of billowing gold material hangs over the stage, faintly celestial. A vacuum cleaner sits downstage, ready to turn itself on. And a great primitive rock sits off to stage left, with a woman lying prostrate, breathing heavily. So begins My Dearworthy Darling, a collaboration between poet and playwright (not to mention hugely prolific author and critic) Alison Croggon and theatre collective the Rabble. These two modes, domestic and primal, will act on each other throughout this play, rub against each other to produce friction and eventually strangely-coloured sparks.

The opening monologue can be read as an evocation of religious ecstasy, or simply a paean to love in its purest form. Jennifer Vuletic writhes over that rock as if the godhead were working its way inside her, which in a way it is. When her husband (Ben Grant) suddenly enters, and begins to berate her for losing or misplacing some item he deems important, the thudding drop into domestic space is funny but also disturbing. She goes from the sublime to the horribly enclosed and narrow. It only takes a few seconds before he’s working on her sanity.

Soon the crooked, abusive husband is joined by his sister-in-law (Natalie Gamsu), who also belittles her sister and sows the mental seeds of doubt. It’s not God calling, they seem to say; it’s madness, but also her selfishness. It’s a nifty modernising of an age-old dynamic, but Croggon tends to overplay the idea of “gaslighting” in these scenes (they often feel like theatre-in-education examples of the concept) so it never moves beyond the merely polemic. Grant and Gamsu produce convincing villains only in so much as the cartoon villain is convincing.

Where the piece truly shines, however, is in the depiction of the central character’s spiritual awakening, linking it effectively with a feminist struggle for self-actualisation in a patriarchal system. Her god is envisaged as male, but the journey here seems to move her beyond gender binaries and into a kind of godhead of the self. It is rare to see contemporary writing for the stage that tackles religious fervour so directly, and Croggon’s rhetorical skill invests the monologues of ecclesiastic revelation with a burnished immediacy.

The Rabble’s co-directors Emma Valente and Kate Davis have devised a strangely unnerving and liminal space for these revelations, incorporating a coup de theatre near the conclusion that only makes it more blasted and otherworldly. Perhaps the most daring decision is an aesthetic one: draping several young performers from Monash in medieval cloaks with hoods, and having them skulk about like Dark Age novices. It initially looks pretty daggy – evoking Beneath the Planet of the Apes more than a Gregorian chorus – but eventually they start to sing and the effect grows in power. When Vuletic joins them, her vocal range vast and her tone uncanny, the result borders on the revelatory.

These primal leanings never quite hit the feverishness they seem to be aiming for, though; the fault seems largely structural. That ritualistic scene of chanting that feels almost like a requiem mass for the constrained female at its centre is followed by two scenes, one of which in particular is anticlimactic. As a coda, the final monologue is too long and also frustratingly opaque, so that the sense is of too many endings. It’s only a minor quibble, however; for the most part, the material is rich and daring.

Croggon’s gifts as a writer are self-evident; that poetic sensibility means that so much of the play’s ideas are communicated through a complex web of imagery and metre. She incorporates Middle English, which gives a great earthiness to the soundscapes, but she is also capable of her own startling word play. A window is described as pregnant, and one line is breathtaking in its simplicity: “Beginnings are brutal”. My Dearworthy Darling is sometimes brutal itself, but also ambitious and often strangely beautiful. And in this most cynical of ages, the rhetorical heft of its religious mysticism feels almost subversive.