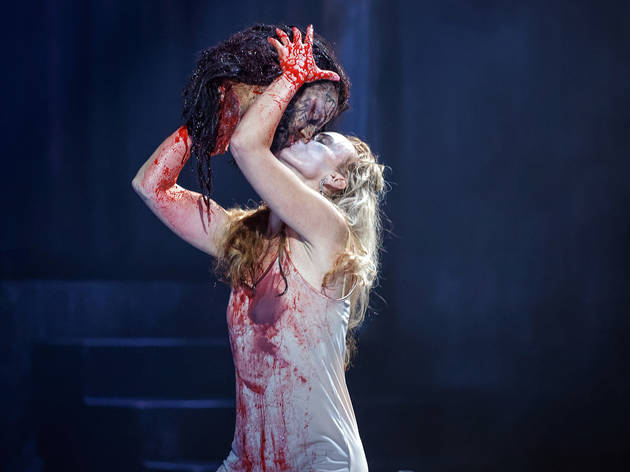 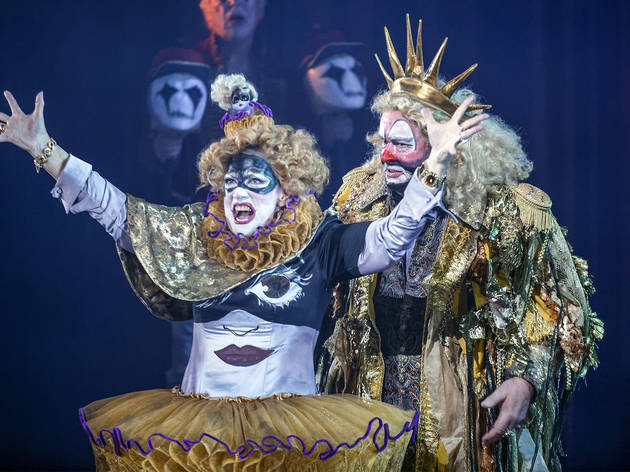 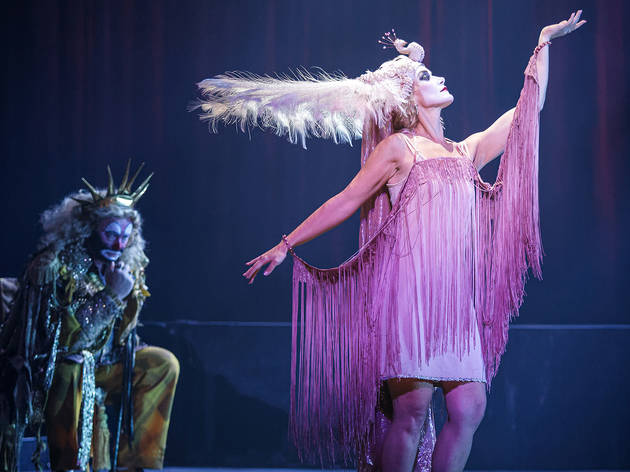 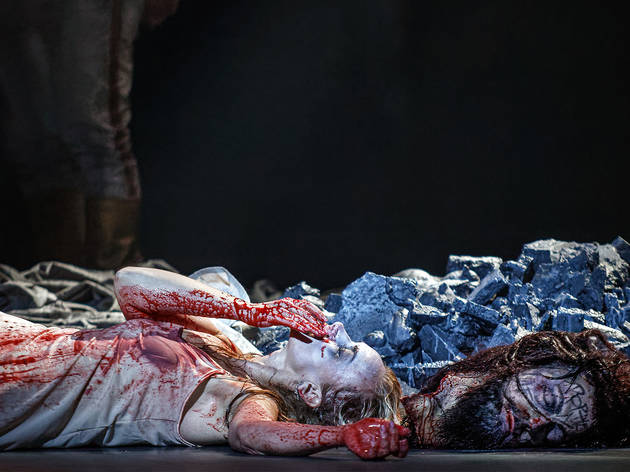 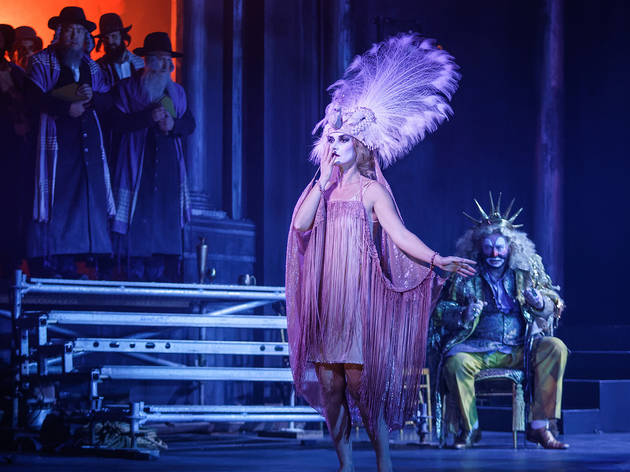 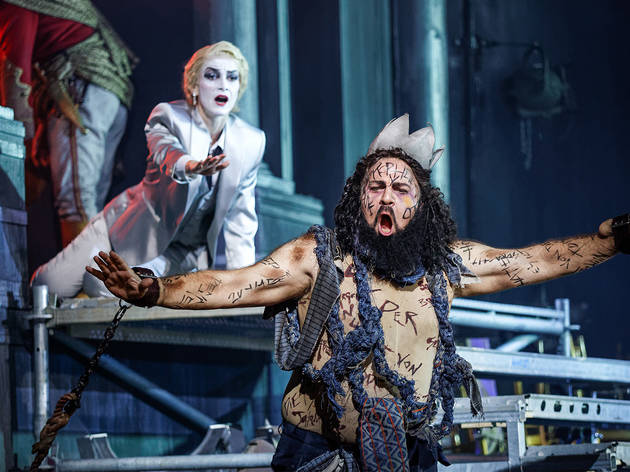 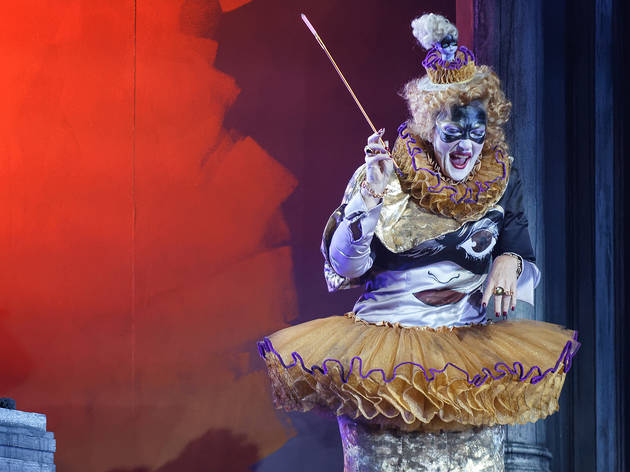 There are certain aspects of the Salome story that are stuck in the public imagination, even for those who think they know nothing about it. There is the dance of the seven veils, where Salome employs a seduction technique to a grisly end; and there is the head of John the Baptist delivered on a silver platter. But there are other fascinatingly resonant aspects that only become apparent slowly in Victorian Opera’s new production of Richard Strauss’s telling of the tale, his 1905 opera Salome.

Strauss based his version on Oscar Wilde’s play, and it’s interesting to note just how much of Wilde’s intention remains. In many ways, it is a seamless transposition of Wilde’s themes and poetic ideas – where Strauss’s swirling and moody music stands in for Wilde’s deeply symbolist language. Certainly the story and the dramatic architecture are unchanged.

Salome (Vida Miknevičiūtė) is the Princess of Judea, daughter to Herodias (Liane Keegan), the new wife of the tetrarch Herod (Ian Storey). Herod is a profoundly corrupted figure, his lust for his stepdaughter undisguised, his corpulence grossly unmitigated. But he is also afraid. He has imprisoned Jochanaan (Daniel Sumegi), also known as John the Baptist, but is terrified of harming him lest he bring down the wrath of “he who is to come”. It is a world where the old gods are dying or dead, but the new ones still only premonitions of destruction.

Salome hears Jochanaan cursing her mother’s corruption and becomes entranced with him. She claims she loves him, and that she “will kiss thy mouth”. When Jochanaan rejects her and Herod asks her to dance, she uses the request as a way to extract an oath. This oath ends in the Baptist’s beheading. Salome does indeed kiss Jochanaan’s mouth, the blood from his severed neck drenching her pale slip, in an image of bodily depravity that has haunted the collective consciousness since.

It could all so easily slide into a representation of what Barbara Creed calls “the monstrous feminine”, and indeed for a while, as Jochanaan spouts the kind of misogynist vitriol that really only took hold of Christianity centuries later with Augustine of Hippo, you might be forgiven for thinking Strauss (and Wilde before him) have fallen into the typical patriarchal clap-trap that has kept the Church such a beacon of irrelevance all these years. But you only have to scratch a little deeper to discover vivid modern resonances.

The opera is obsessed with the idea of looking and the power this regard bestows on the viewer. Salome is linked from the outset with the moon, which turns pure white, blood red and eventually black as night. She is a screen for the projection of men, but her dance is in some ways an act of empowerment, a turning of the tables. Herod often seems like a lascivious Weinstein figure, hideously enslaved to his own ego and lust. But Salome’s fate, even her murderousness, come across as a kind of purification of this corrupted world.

Miknevičiūtė is searingly good in the role, her high soprano both clear and rich, the part’s fiendish range seemingly effortless. Her Salome is initially a breezy, non-binary figure whose curiosity is her defining characteristic, but she grows both more disturbed and disturbing, using coquettish charms for deadly ends. Sumegi makes a wonderfully forthright and resolute Jochanaan, his sonorous baritone driving through the phrasing like a Mack Truck. Ian Storey is a superb Herod, his voice a perfect instrument for the character’s desperation and decay. Liane Keegan is too mannered in the seriocomic role of Herodias, and her phrasing often falls away, but James Egglestone makes a gorgeous contribution as the lovesick martyr Narraboth.

The direction by Cameron Menzies is topnotch, with a freedom of movement that is also precise and disciplined. Christina Smith’s stunning set, a crumbling theatre that speaks directly to neo-classical imagery of the fall of Rome, combines with Anna Cordingley’s deliciously outré Weimar-inspired costumes, and Gavan Swift’s wonderfully decadent lighting to create one the most visually impressive productions this company has ever mounted.

And the music. God, that extraordinary music, as Strauss reaches into the depths of his genius to shock and stun us. Wilde’s extravagant, maximalist language is transformed into phrases of deep wonder and beauty, and Richard Mills’s consummate conducting of a beefed-up Orchestra Victoria means that every leitmotif, each musical augury, achieves its full impact. It may be an old and bloody tale, but it feels very much alive in this excellent rendition.