What’s the deal with iceberg lettuce? First, it was popular, then it became incredibly unfashionable, as we cycled through all sorts of other leaves, from baby spinach, to rocket and mesclun, to kale… and now we’re back at iceberg lettuce. We’re eating whole wedges of the stuff, drizzled with sauce, and paying $20 for the privilege.

This is a legitimate question, asked by Eddie Perfect, in character as Baird, in the second act of The Beast, a black-as-tar satire that uses foodie-ism as a framework to make a much larger point. Originally commissioned for the Melbourne Theatre Company in 2013, Perfect's script has been updated with au courant pop cultural references, which is crucial in a play where keeping up with the Joneses is everything. Directed by Simon Phillips, it’s a rollicking good time, with a vicious afterburn. The text has a regular theatre-going audience firmly in its crosshairs.

The Beast centres, as so many plays do, on a dinner party held by three affluent, white couples in their late thirties. It’s prologue, however, is set on a yacht. Our three male protagonists – tech entrepreneur Simon (Rohan Nichol – playing insufferable smugness for big laughs); law firm partner Rob (Toby Truslove, bringing an endearing man-child energy); and Baird, a man with a more humble occupation – are trapped on the boat in the middle of nowhere having gone on a fishing expedition in the middle of a tropical cyclone. Their guide on this expedition, Skipper (one of three characters played by Peter Houghton), has only had his boat licence for a few months, and is now tripping balls, having drunk three litres of seawater. Things do not look good.

In the next scene, we learn that while our men were rescued, things haven’t been the same since the boat. Rob has been put on gardening leave by his firm for erratic behaviour and his wife Sue (Heidi Arena, channeling a young Prue or Trude) has dragged him out to a scenic village in a posh part of the countryside to repair and rebuild.

Simon, Baird and their significant others Gen (Christie Whelan Browne as a brow-beaten trophy wife) and Marg (Alison Bell, filled with sass and bile) all live nearby, hence, the dinner party. From there, the play flips between violent, gross-out slapstick and bourgeois comedy of manners. This is satire that goes straight for the throat, and the gut, and it’s riddled with f-bombs, faux gang bangs, and literal, slimy viscera. Both the slapstick and more subtle jibes solicit big laughs, but it’s in the latter that the real meat of the play can be found. 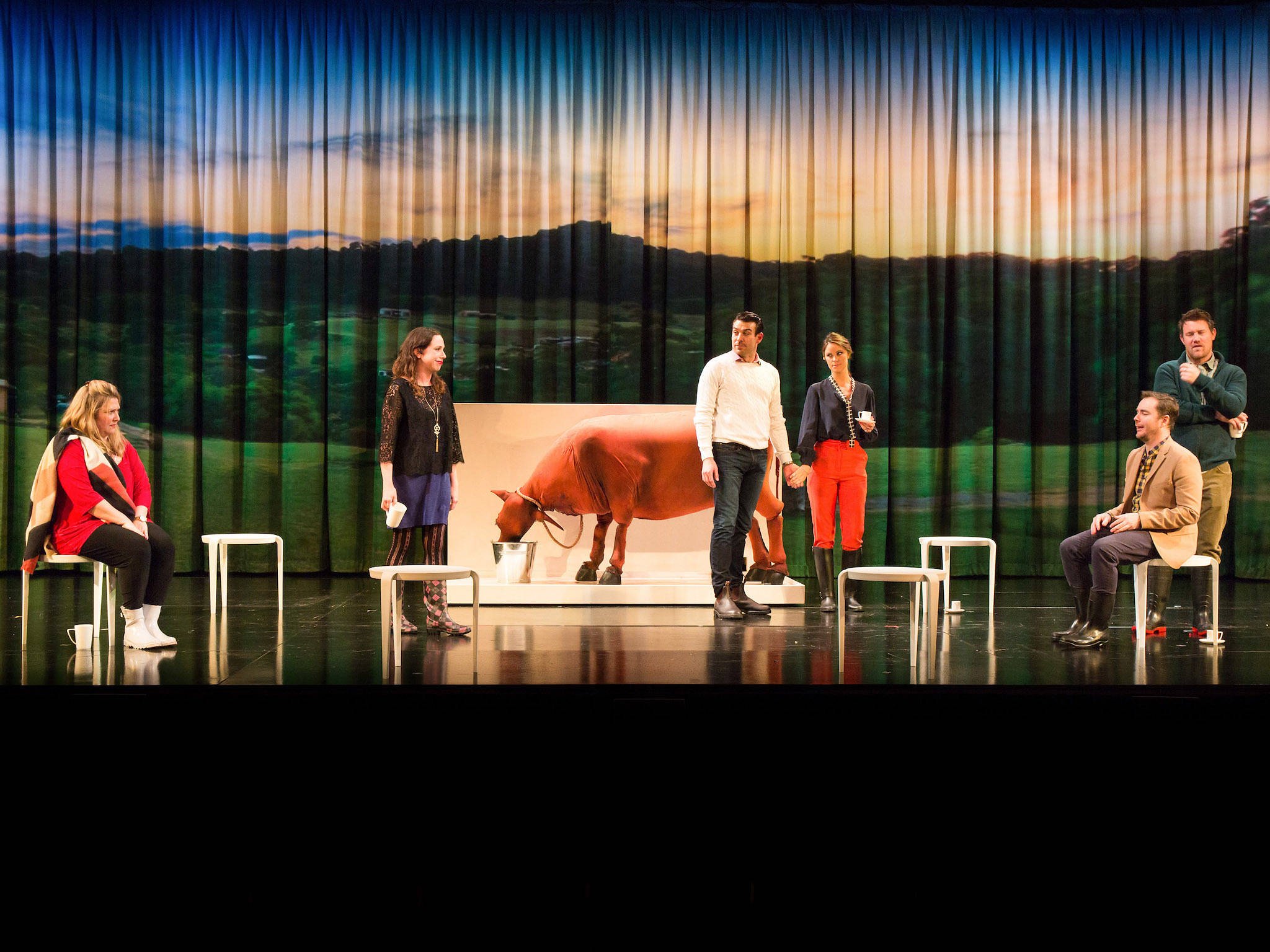 Sue and Simon are very concerned with living an #organic #sustainable #authentic existences. They also cartoonishly hideous people, and Arena and Nicol both excel at flaunting their flaws. The rest of the cast have a bit more heart, and there are some moments of genuine tenderness amid the caustic humour, especially between Rob and Gen, who bond over their status as constant disappointments. The patois between Baird and Marg, too, has a side of sweetness. Some scenes in the play drag on just a hair too long, but the whole never loses momentum.

Dale Ferguson’s set is appealingly minimal, to match the Architectural Digest-inspired taste of the characters. Transitions are zippy, with frenetic music by Alan John, and strobing lights.

French philosopher Pierre Bourdieu is most famous for his theory of habitus. Habitus is a sort of social programming, a way of carrying oneself, articulating one’s tastes and acting on the world that reveals core facts, like one’s social class or religion. Habitus is ingrained from birth, and therefore, almost impossible to fake. The Beast brings this theory to life. It highlights all the subtle ways one can achieve, or fail at, the presentation of wealth and sophistication. This theme is especially prescient in Australia, a country where we like to pretend social classes do not exist.

The capitalist class will go to great lengths to perpetuate its privilege. At the dark conclusion of The Beast, there’s nothing metaphoric about those lengths.