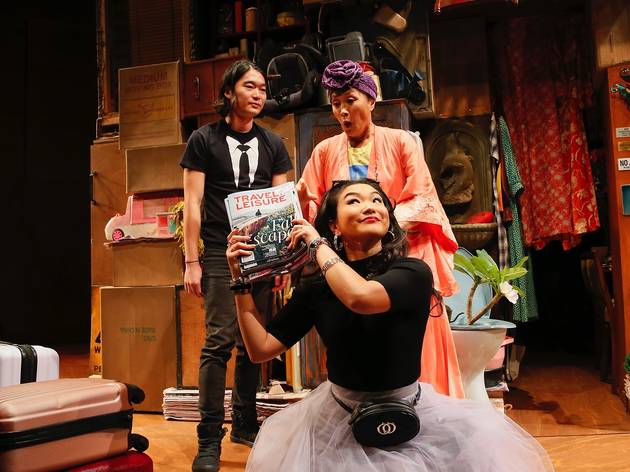 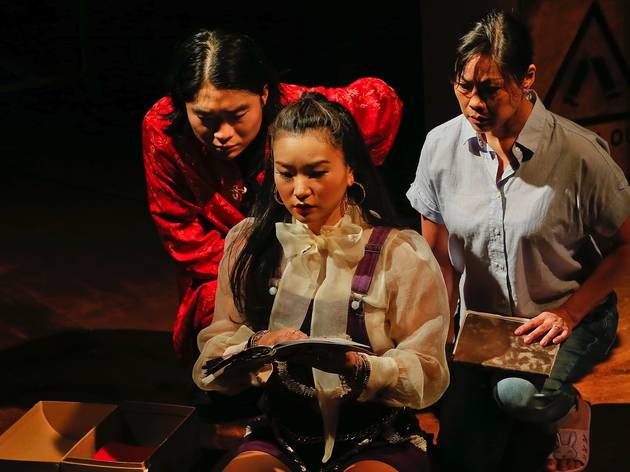 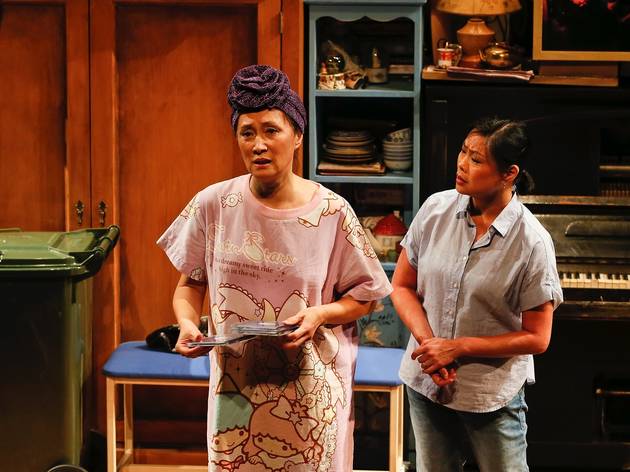 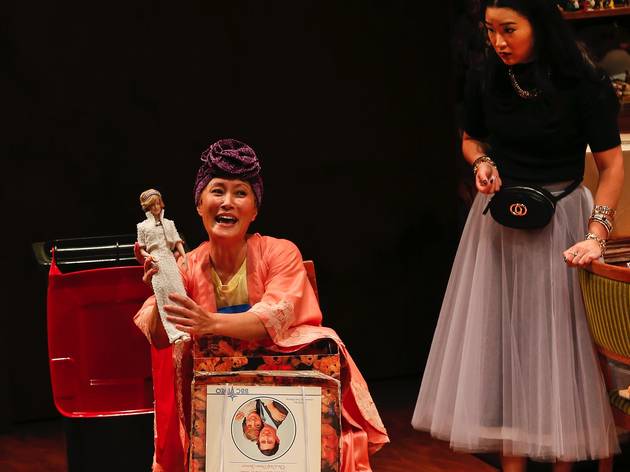 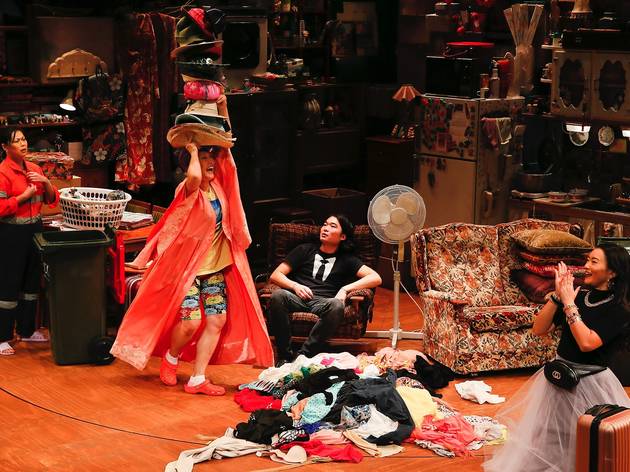 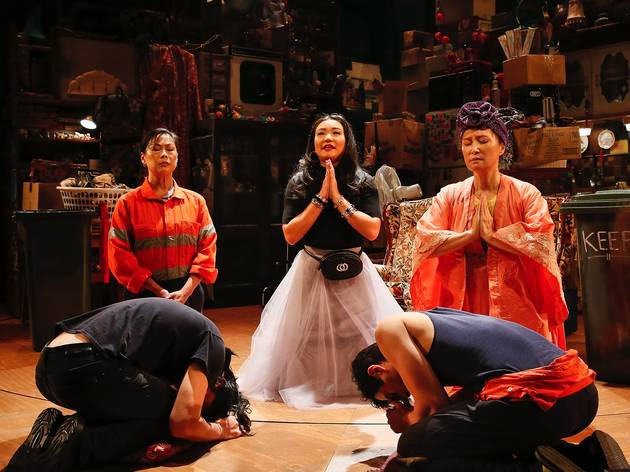 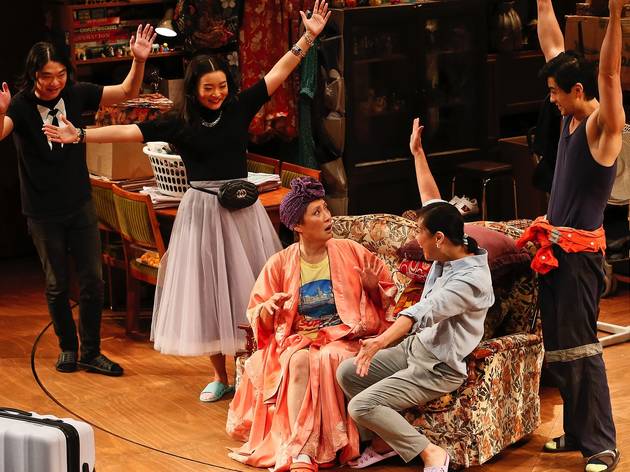 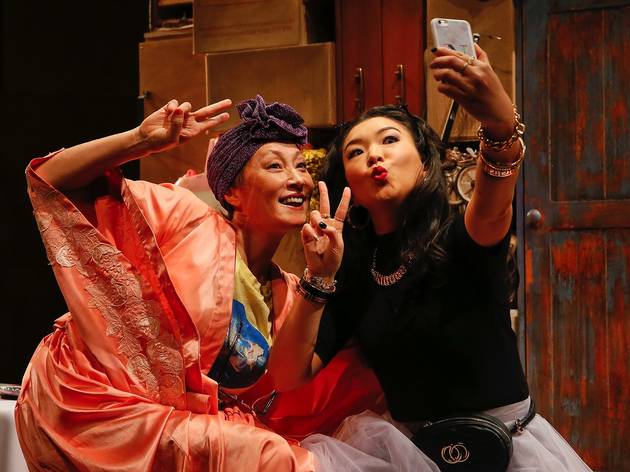 Update 16/03/20: Arts Centre Melbourne closed all its venues effective as of midnight on Sunday, March 15. Consequently Torch the Place has had to cancel its remaining performances.

Ticketholders can either exchange their ticket for shows later in the year, request a refund or donate the cost of their ticket to Melbourne Theatre Company. All tickets absorbed as donations will receive a tax deductible receipt.

Why do people hold onto things? To outdated magazines, dusty cassettes, to clothes no longer worn, toys no longer loved? Are they so rooted in memory that to throw them away would be as criminal as to forget? Or perhaps it’s borne out of a capitalist instinct for material accumulation. Or to piss off the neighbours. Or maybe, when the objects pile up to the point of dangerous excess, when appetite turns into obsession, it’s mental illness.

Or all of the above. Torch the Place, writer and journalist Benjamin Law’s debut play, doesn’t offer a straightforward answer. Instead, Melbourne Theatre Company’s latest production digs its fingers into every pie, showing us the creative array of excuses one may give for holding on to what are – in anyone else’s eyes – piles of useless junk. The hoarder in question is Teresa’s mum (Diana Lin), whose Queensland estate is cramped floor to ceiling with all sorts of miscellaneous paraphernalia. Her obsessive hoarding disorder prompts an intervention from her three adult kids, who assign themselves the mission of decluttering the place. But it all becomes harder than they originally envisage – after all, everything in the house sparks joy.

Much of the play runs on the amusing banter of the bickering trio, as they excavate their mum’s belongings and unearth long-buried childhood memories. Teresa (Fiona Choi), the eldest, acts as a vaguely matriarchal anchor for her siblings, with her progressive, smart alec brother, Toby (Charles Wu), social media influencer sister, Natalie (Michelle Lim Davidson), and overtly Aussie husband, Paul (Max Brown), in tow. With Law’s writing, each character quickly departs from their initial caricatures and form fully rounded people. Under Dean Bryant’s direction their chemistry feels natural, with their familial bonds, however frayed and knotted, strung tight.

Torch the Place’s emotional weight falls largely into the hands of Diana Lin, the mum, who despite fielding laughs with her innocuously inappropriate quips and Cantonese twang, gives a performance tinged black on the edges. Moments of horror and anguish mark Torch the Place’s best quality – though Law’s script glides with a primarily light-hearted veneer, it exercises a brilliant spread of emotional range, as conversations and revelations teeter (particularly in the final scenes) from rage to melancholy to comedy to horror with meticulous precision.

Minor plotlines that thread throughout the play, however – such as Teresa’s difficulty in bearing a child, Toby’s fear of coming out, and their mum’s recent run in with cancer – add only ancillary cartridges of comedic or dramatic ammunition, which fail to resolve with much insight. At one stage, Toby faints – which brings on a sudden hilarious, hallucinatory sequence I will not spoil – and his random unconscious spell is not really explained, simply a launchpad for a bit of surreal comedy. And there are other aspects of Torch the Place that seem there for the sake of it. They offer up easily digested bits of sentiment in an otherwise lively setting but don’t form fully, and thus fail to give the serious issues they tackle their dues.

It is the play’s sober forays into the main plot – their mum’s hoarding disorder — that anchor and deepen the narrative. There’s a distinct feeling that underneath all the harmless squabbling lies something darker, bleaker, obscured in the shadows: a thickly concealed trauma. Isabel Hudson’s set, an exhausting, stacked tapestry of life and detail, under Amelia Lever-Davidson’s bright, revealing lighting, reflects the grim fanaticism of hoarding – such that the first reveal of the home’s real interior sparks a feeling of horror, not comedy. For Teresa’s mum, throwing out a magazine is not marked by gentle reluctance; it’s an act as sharply wounding as the cutting of an umbilical cord. To collect, stockpile, treasure all these items – it’s all kind of funny, until it’s suddenly not.

While Torch the Place doesn’t offer any real answers to the roots or remedies of the illness, it lands ultimately on a nice sentiment. Their mum can see the beauty in things even if they can’t, be it a plant blooming out of a toilet bowl, a clump of hair, or a motley trio of adult children – things too precious to let go of, souvenirs of happier times now too precious to dispose of. Those objects must bear the brunt of meaning otherwise absent in an unmoored, lonely life. Torch the Place shows, for those who have lost (or found themselves lost) that one must learn to adjust and see how beauty flowers from imperfect things.