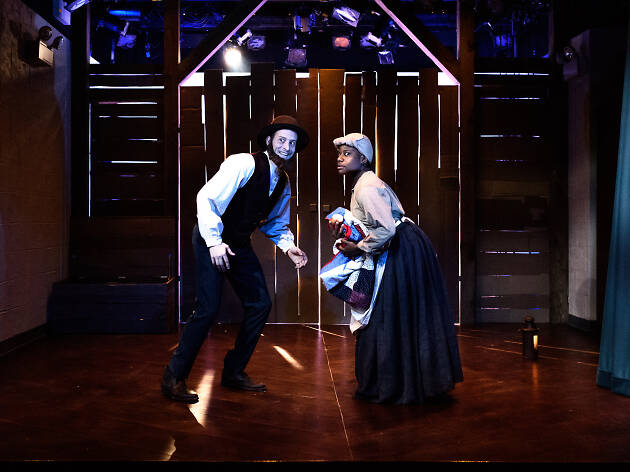 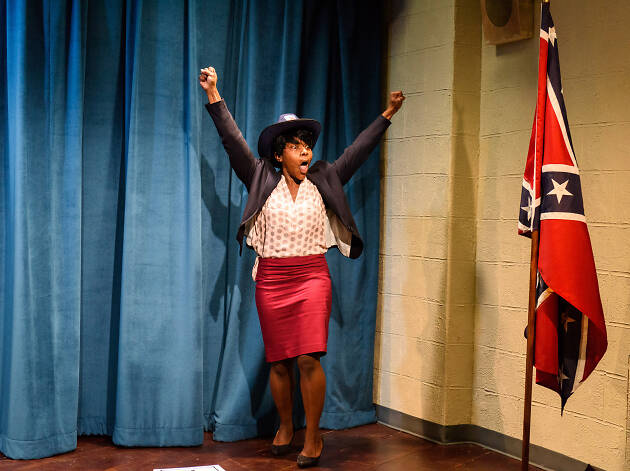 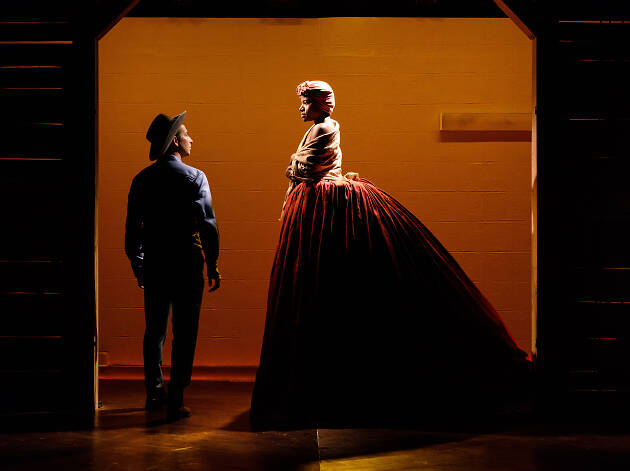 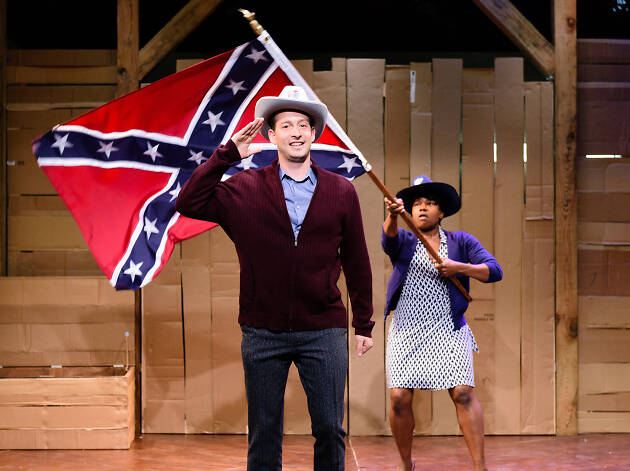 This provocative comedy from New York has landed at Melbourne's Malthouse

It’s possibly a little difficult for Australian audiences to fully grasp the depths of awkward that a theatre show titled Underground Railroad Game conjures for citizens of the United States of America. The Underground Railroad was a Civil War-era network of clandestine routes and safe houses that helped slaves escape into free states from the Confederate South. That it can be made into a game – even for the purposes of education – seems rather perverse, and perverse it turns out to be.

The play opens with an ingenious scene involving a slave (Jennifer Kidwell) and a Quaker (Scott R. Sheppard) in a barn just outside of Hanover, Pennsylvania; highly performative, with grand gestures and a heightened performance style, it manages to feel vital and ersatz at the same time. It’s only when this scene breaks and the characters reveal themselves to be middle-school teachers Caroline and Stuart, that we realise the reason for this odd disconnect: teachers, in their need to entertain as much as educate, will always push things too far. Just how far Caroline and Stuart push things has to be seen to be believed.

The game they come up with is to reconstruct the basic conditions of the Civil War – by dividing kids (in this case, the audience) into Confederate or Union soldiers, and using dolls to represent the slaves. Union soldiers must secretly ferry “slaves” into a trunk that represents the “safehouse”. Confederate soldiers have to try and stop them. It’s all harmless, as long as you’re willing to ride roughshod over the brutality and horror at the heart of your own history. Kidwell and Sheppard developed this piece together many years after Sheppard actually played a version of the game in fifth grade, so the sense of distaste is impossible to dismiss as merely allegorical.

Scenes from the classroom are intercut with hilarious and increasingly bizarre revelations into the teachers’ private lives, as they begin dating, propose and then descend into violence and sadomasochistic roleplay. This coincides with a shocking act of vandalism from a student that unearths some of the latent racism the country may have preferred to believe was behind them. Through all the mayhem, the play’s central argument becomes clear: that the personal, private relationship is never immune from the grand national questions of racial inequality; indeed, the country’s malaise is by its very nature interpersonal.

Kidwell and Sheppard are both superb. Sheppard makes Stuart’s white guilt and misguided fetishism of black culture something more than mere parody; something desperate and trapped. It’s a paradoxically charming embodiment of problematic liberalism, both noxious and curiously sympathetic. Kidwell rips up the playbook as Caroline, at once fiercely triumphant and bone-wearingly tired of the pedagogical burden she’s been forced to carry her whole life. Sheppard absolutely nails the requirements of his role, but there’s a sense that Kidwell gives her very soul to the part.

Director Taibi Magar does a magnificent job pulling Underground Railroad Game together. It’s a play that is kaleidoscopic in tone and syncopated in rhythm; it comes at the central idea from multiple directions simultaneously, and can’t afford a moment of slackness or indirection. New York company Ars Nova’s production – with simple but effective production design by Tilly Grimes and scenic design by Steven Dufala, augmented by vibrant and evocative lighting design by Oona Curley – is faultless, completely supporting the actors while getting out of their way. It’s a production that has toured extensively, and it shows in its confidence and its power.

When the teachers ask us if we are going to “reaffirm or rewrite history”, they mean two things at once: the surface meaning is about whether the Union or Confederate soldiers are going to win this game. Union is a reaffirmation and Confederate is a rewrite. But there’s another meaning, and it’s far more nuanced and complex, and has a direct relevance for this country, still so wracked and knotted about its own racial history, not to mention its racial present. The danger in reaffirming history is that we repeat and lock in the same power imbalances, but to rewrite it is to whitewash the pain and the responsibility. This is a play that refuses to answer that dilemma for us, and it’s the more disturbing and resonant for it.