The MCA is bigger, brighter, bolder and better than ever before

It’s fair to say the building had some issues: poor circulation; school groups clogging up the undersized entrance; inadequate access for visitors in wheelchairs, visitors with children and other not-so-mobile types; artworks subject to the indignity of being unloaded in the parking lot; two entrances on different levels (George Street and Circular Quay) only adding to the confusion.

Even its director, Elizabeth Ann Macgregor, recalls the slight twinge of disappointment she felt when she first rocked up to its front door.

“I’ll never forget when I came to Sydney for the first time, standing out on the forecourt and thinking: how bizarre that there’s a great big wall at the main entrance,” Macgregor says. “There’s no desire lines, nothing that draws you to the building.”

Even more fundamentally than all that, the public face of the building – a face more suited to the building’s former life as the administration offices of the Maritime Services Board – was at odds with the cutting-edge work on show inside.

But no longer. Two international design competitions, years of planning, months of construction and $53 million later, the MCA – and contemporary art in Australia – has been transformed forever. On Thursday the 29th of March, the MCA will be born again, boasting 50 per cent more floor space, a rooftop café and sculpture terrace, a high-tech education centre, a 120-seat lecture theatrette and forecourt.

The original sandstone building is still there. Only now it has a not-so-identical conjoined twin by its side: a giant stack of black, white and brown boxes. The more artistically inclined will suggest that the two structures are ‘in dialogue with one another’. Others will just see a jumbled-up Rubik’s Cube. Either way, it’s a striking addition to Sydney’s most desirable waterfront address. “We wanted to keep the old building but provide something next to it that says immediately that this is a contemporary building,” Macgregor says. “Hopefully people will react very differently to seeing this beautiful, very interesting, very modern looking building on the end.”

The two buildings may look like an aesthetical odd couple on the outside, but, as architect Sam Marshall explains, it’s a single unified experience once you’re indoors. “You enter the new building and come into the old building,” Marshall says, “and hopefully don’t notice the transition.”

I’m whisked through one of the new gallery levels to take a look. As promised, it’s a whole new sensation: clean, logical and open – with long vistas to entice and draw you in further. While the design of the exterior is about drawing attention, the opposite is the case for the interior. Marshall has treated the space’s “acne”: clearing away air conditioners, lighting fixtures and other blemishes getting in the way of an uncontaminated gallery experience. “The most important thing is the art,” says Marshall. “In the perfect gallery there would be no architecture visible. For most of the MCA’s exhibitions they install walls, change colours and put different surfaces in. That requires a really simple space with a really simple circulation system.”

There are windows though – Marshall says he had to resist the temptation to totally open the galleries up to the harbour views. In the end, intermittent glimpses of the outside scenery were chosen with the same curatorial care that went into selecting the art for the first wall-hang. “You’d be crazy not to use the fabulous view,” says Marshall, “but there are certain functions of a gallery you have to take into account. We made the openings smaller so that when you do see the view it’s special.”

With all that’s new on the site, Macgregor and Marshall are particularly chuffed about the new education facility. In the recent past, MCA’s education programming jostled for space with revenue-raising corporate functions and wedding receptions. Now, students will get their own dedicated digital classroom and workshop, multimedia and special needs spaces. “We’re very proud of the fact that we’ve put education centre stage in that wing,” says Macgregor. “I think it’s going to be regarded as certainly a leader in Australia, and maybe even a world leader, in terms of what we can do there.”

And, as Macgregor is pleased to point out, there’s even a new front door: a much grander, much better signposted, much more welcoming entrance that links George Street to the Quay, a contemporary take on one of the Rocks’ pedestrian laneways. It’s one of the building’s architectural masterstrokes. “It says, ‘Come in’”, says Marshall.

For Macgregor, the MCA’s leap into the 21st century comes at a personal cost: she’s back in an office with half the view she once had and elevators rumbling and dinging impudently outside. But not even that can dampen her excitement. “I spent the weekend hanging the collection,” she says, and the twinkle in her eyes and her smile says it all. 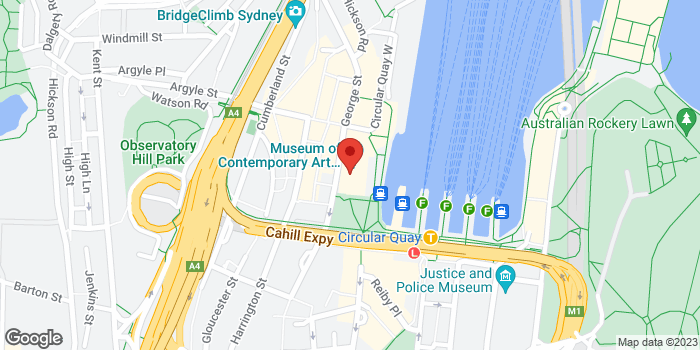