The best hotels near the Empire State Building

The best hotels near the Empire State Building may not be in the ‘trendiest’ of New York neighborhoods, but they certainly are located at the heart of New York City. Situated along Manhattan’s Fifth Avenue in Midtown, the hotels near the Empire State Building are within walking distance Herald Square, Macy’s, Bryant Park, Madison Square Garden, and Korea Town, NYC’s more iconic landmarks. Not to mention the Empire State Building itself, one of the best Manhattan attractions on its own. Opened in 1931 as an office tower, this location been the subject of movies and must-visit attraction lists ever since—and it’s easy to see why. Tourists can get breathtaking 360-degree views of the city from its open-air 86th Floor Observation Deck. Or go up 16 more floors to get to the 102nd level Top Deck. Down below, the building’s lobby captivates with its golden Art Deco-inspired murals. And with most subway lines just a few blocks away in any direction, a stay near the Empire State Building will put you everywhere you want to be.

Hotels near the Empire State Building 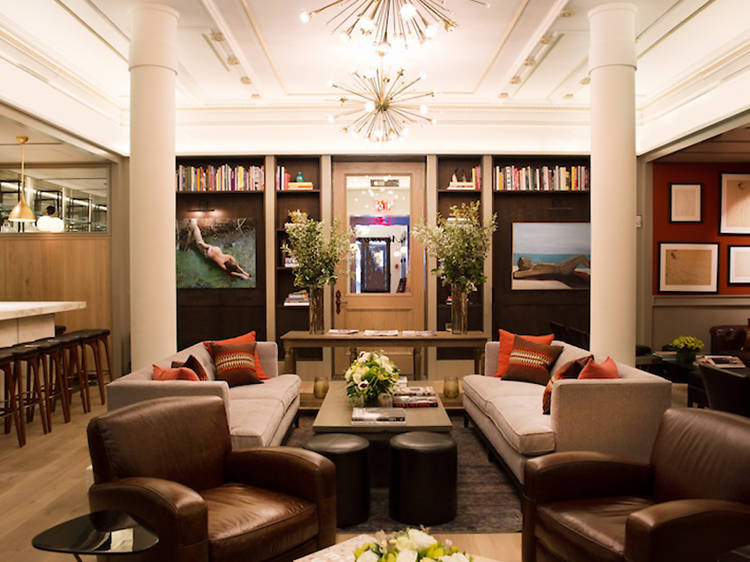 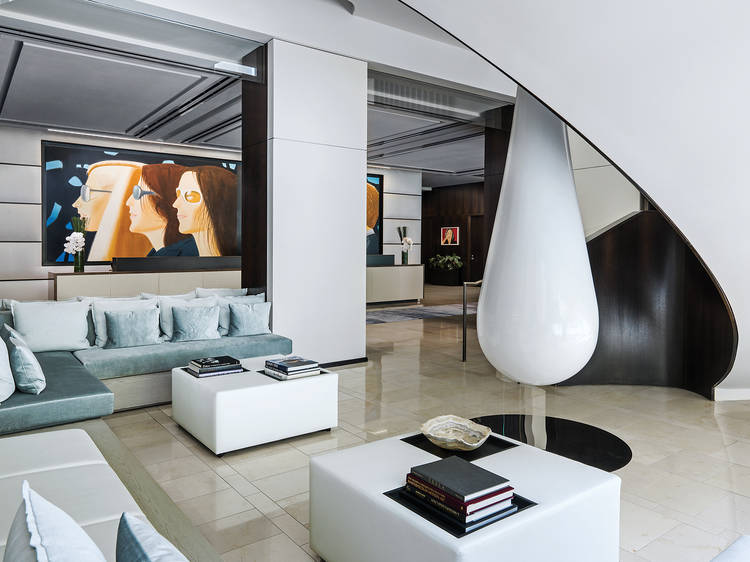 Having recently unveiled a renovation of its public spaces, Langham Place, New York boasts a residentially-inspired aesthetic, topped off by a multi-million dollar permanent art collection featuring the works of Alex Katz, as well as two brand-new 1,900 square foot penthouse suites designed by the famed French interior design retailers Roche Bobois. Nestled in the Midtown district and located between Bryant Park and the Empire State Building, the contemporary luxurious property’s 214 guest rooms and suites are some of the largest in the city. Each of them is furnished with indulgent amenities such as Swedish Duxiana beds and large marble-clad bathrooms with rainfall showers. Many are highlighted by views of the iconic Manhattan skyline that is framed by oversized windows. Foodies will enjoy the French and Italian Riviera inspired Ai Fiori, a Michelin-starred restaurant from Chef Michael White’s Altamarea Group, located on the hotel’s second floor. Encompassing the hotel’s entire third floor, The Gallery at Langham Place, has the capabilities to host meetings, events and social gatherings of all sizes. 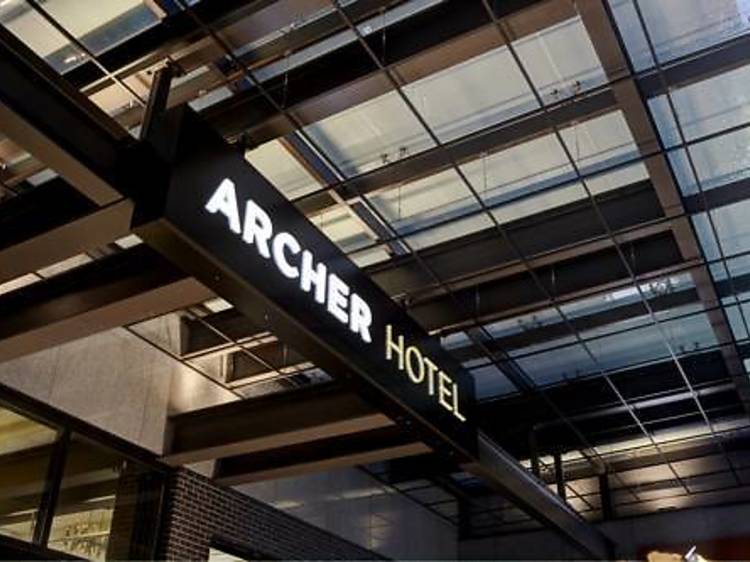 This 22-story, new-build hotel features 180 guestrooms, each with a walk-in shower, make-up mirror, workspace, laptop safe, 42-inch flat-panel TV and device docking station. Amenities and services include Burke in the Box in-room dining, Frette bathrobes, Malin+Goetz bath amenities, a Nespresso and a stocked minibar, a concierge, a lobby business center, complimentary newspapers and a completely smoke-free environment. Archer’s food and beverage offerings, all under the direction of the Craveable Hospitality Group, include David Burke fabrick, the Foyer Bar and Spyglass. 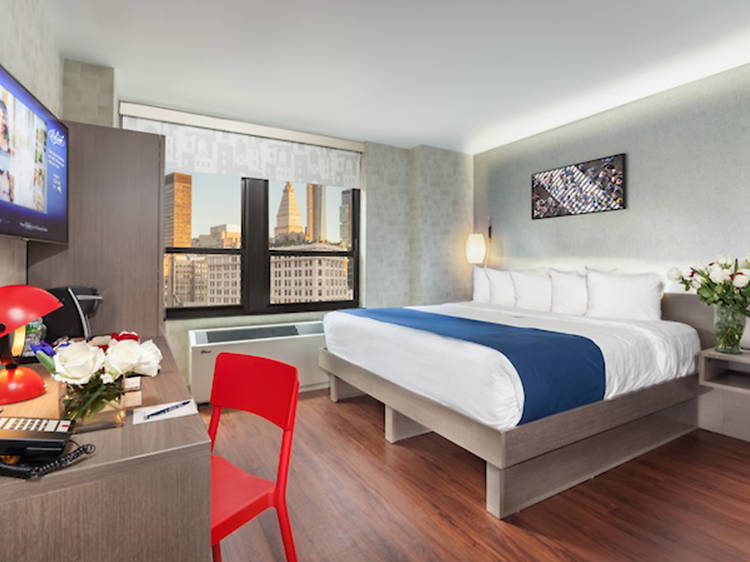 This luxury boutique hotel has amazing rooftop views, featuring the Empire State Building as the backdrop. Its 122 lifestyle guestrooms are made up of upscale suites with outdoor patios. Inside each of them, find an iHome docking station, complimentary Wi-Fi, a refrigerator, a rain showerhead, flat-screen cable TV and Pharmacopia bath products. Free passes are available to guests at the off-site Blink Fitness. Breakfast and dinner is available at the on-site restaurant, La Mesa de Paul. 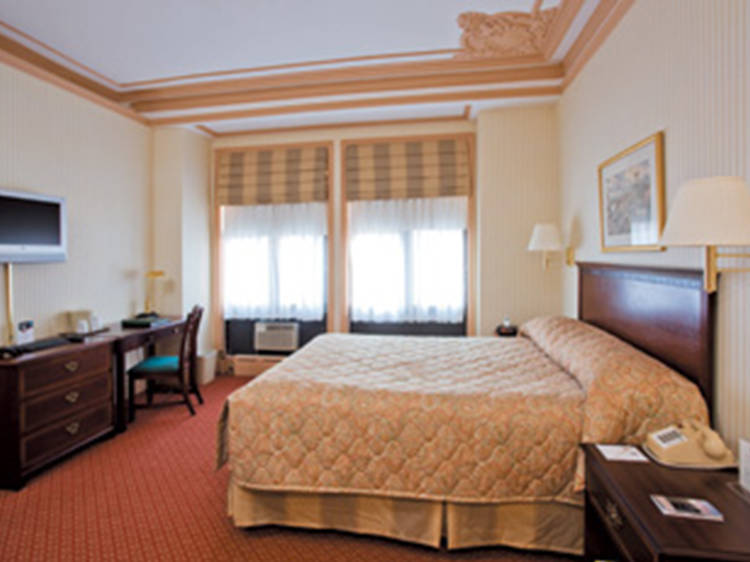 Located in trendy NoMad, three blocks south of the Empire State Building, Hotel Wolcott is quintessential “antique chic.” Built more than 112 years ago, the lobby and many guest rooms retain their original architectural detailing, but with modern-day amenities. They come with one queen bed, two single beds, three single beds or one queen bed and one single bed. 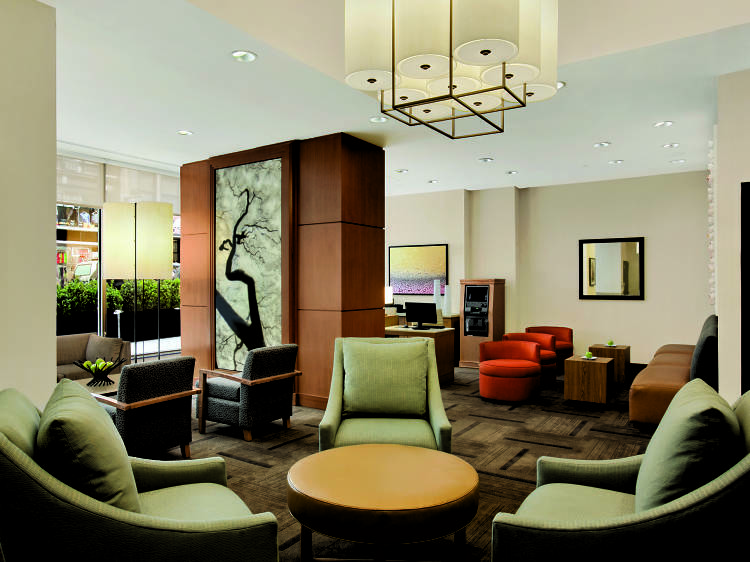 From a complimentary AM Skillet Breakfast to free Wi-Fi throughout the building, Hyatt Place New York/Midtown-South offers a luxury experience at the heart of the Big Apple. Each room features a plush Hyatt Grand Bed, Cozy Corner with sofa or sofa-sleeper, modern bathroom with complimentary amenities and a 42” HDTV. 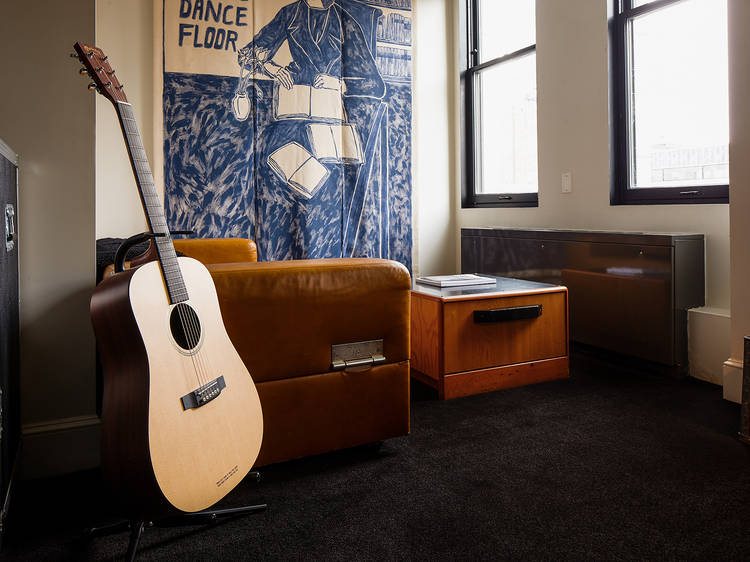 Housed inside a turn-of-the-century building in NoMad, and designed by Roman & Williams, Ace Hotel New York takes its cues from the vibrancy of street life, mixed with modern day tech touches. In guest rooms, find an iPod or Music Hall turntable; some rooms also contain a full-size Smeg refrigerator. Loft Suites measure at 700 square feet and hold half-moon couches, a large table, bathroom with clawfoot tub, hardwood floors and bright views of both Broadway and 29th Street. There is also high speed wireless internet, a flat screen TV and an in-room safe. As for dining, Ace Hotel New York has a Stumptown Coffee Roasters café; The Breslin, a Michelin-starred, English restaurant; No. 7 Sub; and the John Dory Oyster Bar. 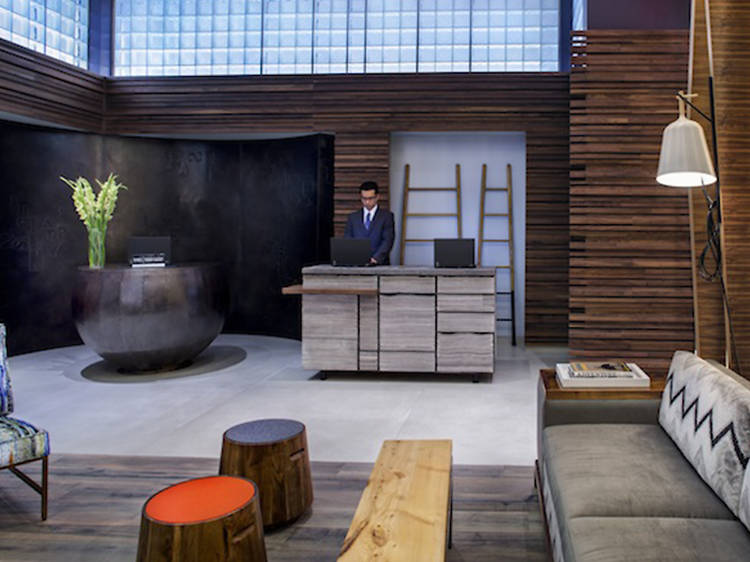 Hyatt Herald Square New York, while toting the iconic brand name, manages to evoke a chic, boutique style. With an infusion of thoughtful décor and personalized service, this hotel’s carefully curated design blends iconic fashion with the heritage of Herald Square’s publishing age, ranging from printing press letter-style room numbers, to the front desk comprised of newspapers, to antique typewriters on display. The property’s industrial feel and high-style elements create a fluid experience for both business and leisure travelers. If looking to unwind, enjoy a meal at “The Den” Restaurant or head up to the outdoor rooftop lounge, Up on 20, for unparalleled views of the Empire State Building, tantalizing cocktails and delectable small plates (open seasonally). 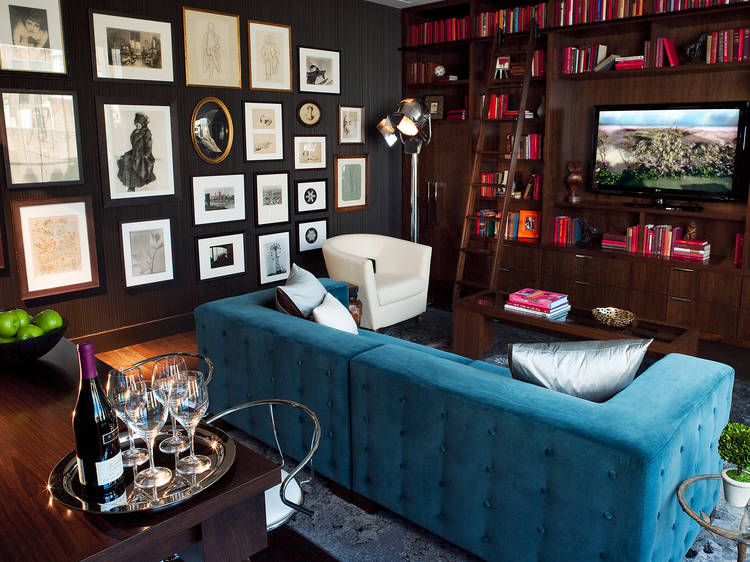 This luxurious 292-room hotel is entirely tech-forward, best shown by its Big Screen Plaza—a 30 x 16 feet high-def LED screen broadcasting a varied mix of live programming and events in this public space. A complimentary business bar enables guests to borrow a range of devices from laptops, chargers, and headphones to even GoPro cameras, Bluetooth multi-device keyboards and Ultimate Ears Megaboom portable speakers, you name it, throughout their stay. The property’s first floor design by Crème is both sophisticated and comfortable, creating a stylish guest experience that embraces the hotel’s vibrant Chelsea neighborhood and cosmopolitan lifestyle experience for business and leisure travelers alike. Other offerings include the Spa @ Eventi, a fitness center, L’Amico restaurant and The Vine Lounge by celebrity chef Laurent Tourondel, and a 530-car parking garage with valet service.

Situated at the convergence of the Murray Hill and Flatiron districts, Hotel 32|32 contains a mix of minimalist-meets-modern rooms, suites, and studios. Every unit in this boutique hotel comes with floor-to-ceiling windows, appliances and furniture, plus either a balcony or fully equipped kitchen; in some cases, they contain both. Their 24-hour “32|32 Lifestyle” concierge team can provide recommendations on everything from restaurants and tours to nightlife and attractions. A partnership with a nearby full-service gym provides guests with access to their facilities, while another one with neighboring café offers complimentary breakfast. 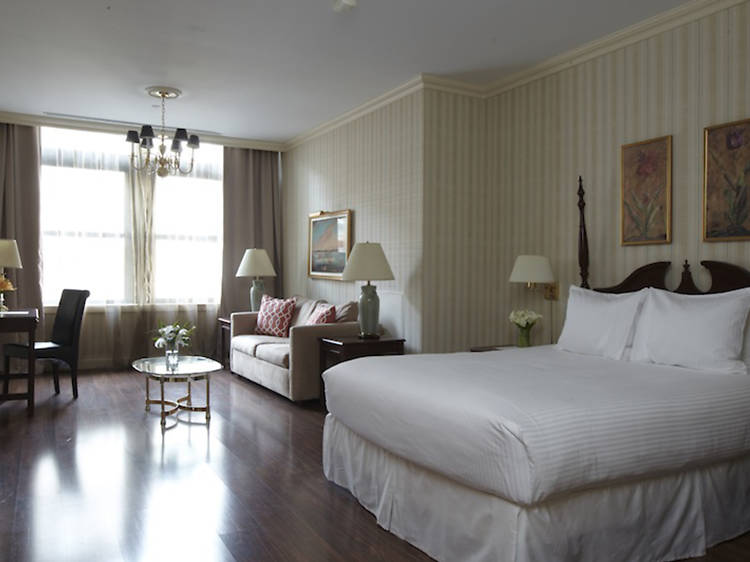 This European-style boutique hotel is all about its location - just two blocks from the Empire State Building. A variety of rooms and suites come with spacious bathrooms; complimentary internet access; a flatscreen TV; and conveniently located work outlets for computers. There’s also an onsite fitness center and a library/lounge area, plus a continental buffet breakfast that’s available for a fee. 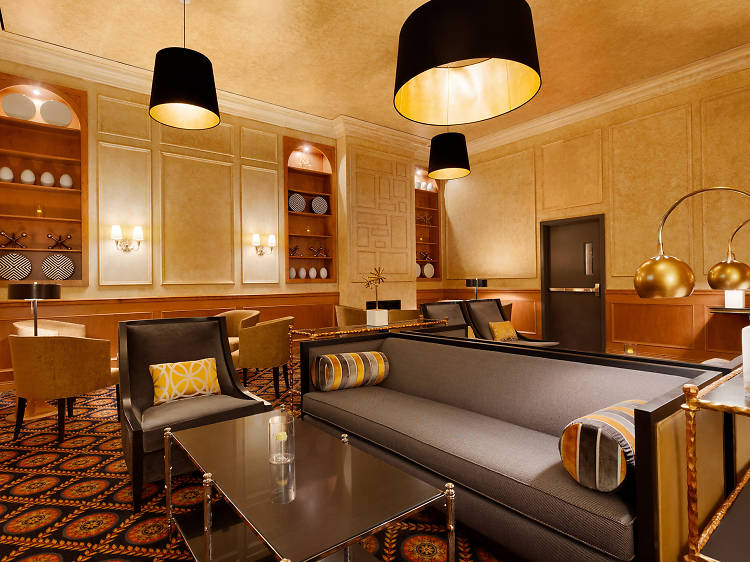 Within steps of the Empire State Building, this luxury boutique hotel carries Old World elegance and charm with contemporary amenities. Suites are appointed with separate living and sleeping areas, while guestrooms are accented in rich fabrics with modern chrome, glass finishes, and Italian marble bathrooms. In-room amenities include a spacious work desk, mini-bar, audio docking station, Keurig coffee maker, and electronic safe. Complimentary Wi-Fi is available throughout the hotel. The property also has a fitness room, coffee shop, restaurant and bar, business center, laundry and dry cleaning services, and, for a fee, valet parking and self-parking. 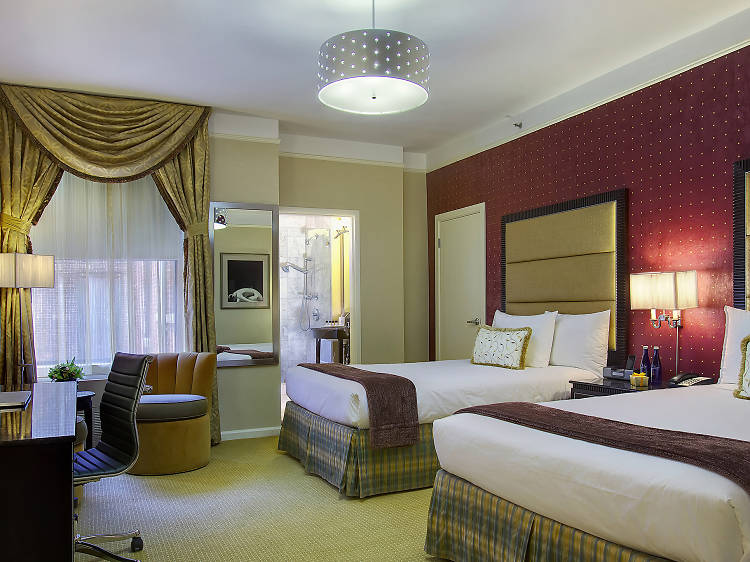 Set in the shadow of the Empire State Building, this small yet stylish hotel contains 183 comfortable and contemporary guestrooms and suites. On the property lower floors, all contemporary rooms feature amenities ranging from Gilchrist & Soames products and an iHome clock radio with an iPod docking station. With contemporary rooms, found on the upper rooms, extend to offerings such as a Keurig Coffee Maker and an ergonomic work chair with a granite working desk.  Complimentary amenities include its fitness and business centers, Wi-Fi access, a daily continental breakfast, and all-day coffee served in the lounge. Enjoy an afternoon snack at the restaurant, Metro Grill, which also contains a bar and lounge open until midnight every night.

Looking for a bite near Penn Station? 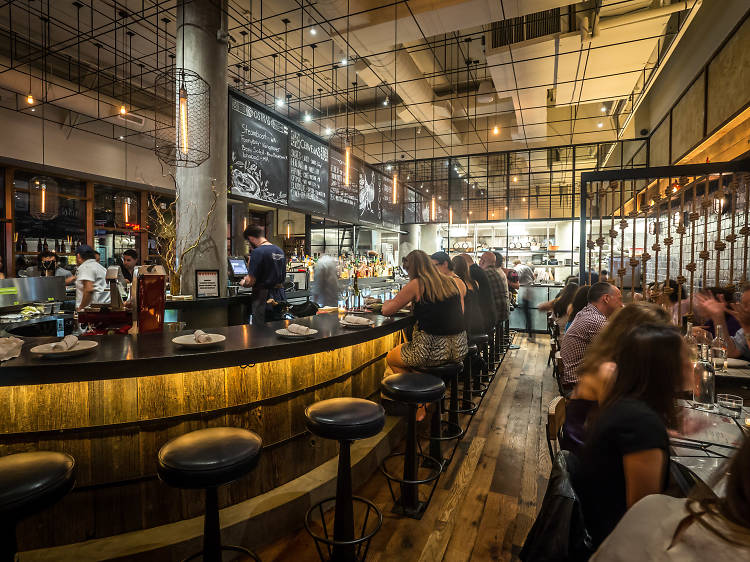 Check out the best restaurants near Penn Station

Whether you're a local or commuter, find a solid meal at the best restaurants near Penn Station in NYC