Take in a movie under the stars at these NYC parks and more.

Looking for the best spots in NYC for an outdoor movie? We've got you. Spreading out your blanket to take in outdoor movies has always been a beloved summer pastime in NYC but this year, more of us are spending time in the great outdoors than ever before. Luckily, NYC has options for everyone, from public parks like Bryant Park to restaurants with patios such as The Standard's plaza. You don't have to worry about mosquitos (or getting dressed up) if you don't want to. And some of these spots offer incredible views that give NYC movie theaters a run for their money, like the Skyline Drive-in and the Queens Botanical Garden.

RECOMMENDED: Outdoor Movies in NYC: all of the screenings in one easy calendar

The best places to see outdoor movies this summer 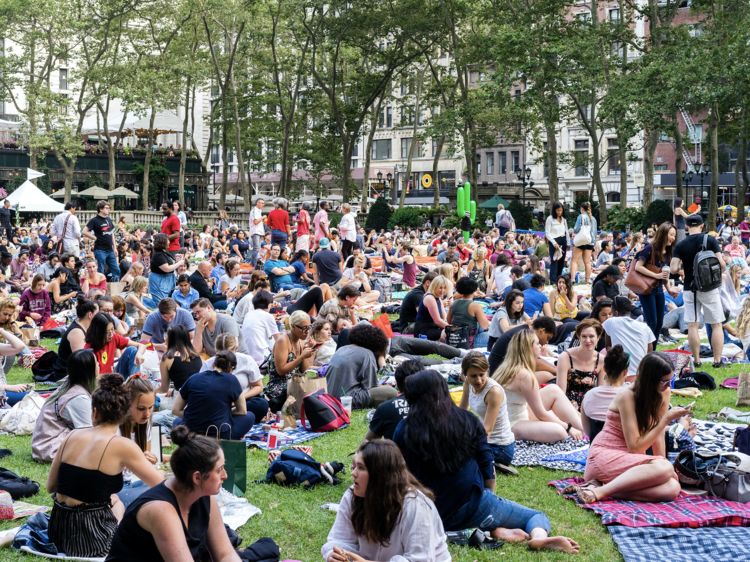 Kicking off on June 13, the beloved outdoor screenings will take place every Monday for 10 weeks. The lawn opens at 5pm but the films won't start until 8pm. You're encouraged to bring your own blanket, but you can also buy one at the park directly. There are no dogs allowed in the area and neither are chairs or tables. It will just be you under the beautiful New York City skyline, watching a great flick and snacking on food you bought from a selection of vendors curated by Hester Street Fair. This year's presentations will focus on the beauty of movie sequels, so do expect a lot of "part twos" in the schedule, which we reproduce below: 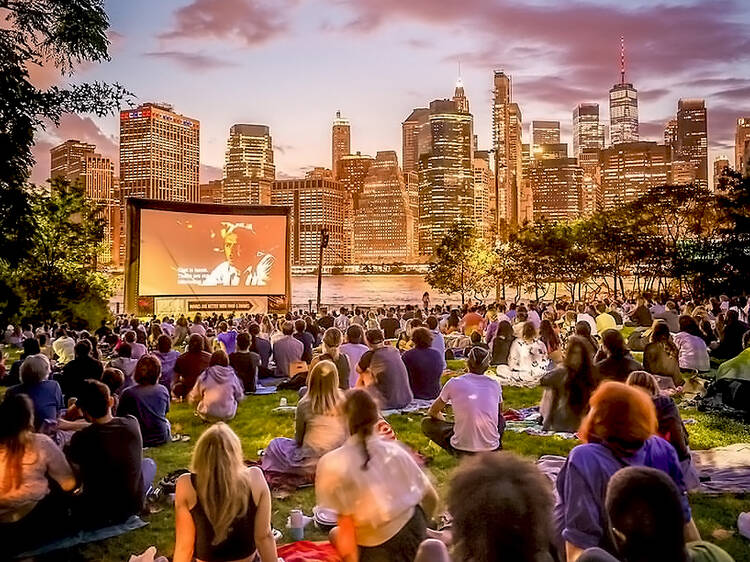 2. Movies With a View at Brooklyn Bridge Park

Every Thursday night starting July 7 through August 25, New Yorkers get to hang out on the Pier 1 Harbor View lawn and catch an exciting flick. As usual, guests can bring their own picnic or purchase food and drinks curated by Smorgasburg on site (the vendors will open up shop at 5pm, giving you plenty of time to stock up on some goodies before the doors for the lawn open at 6pm and the movie begins at sundown). But there are more reasons to get there early, including the variety of DJs that will be spinning tunes before movie time. Expect film shorts by local filmmakers as selected by BAM Film to also play in the background.

Here is the season's movie schedule: 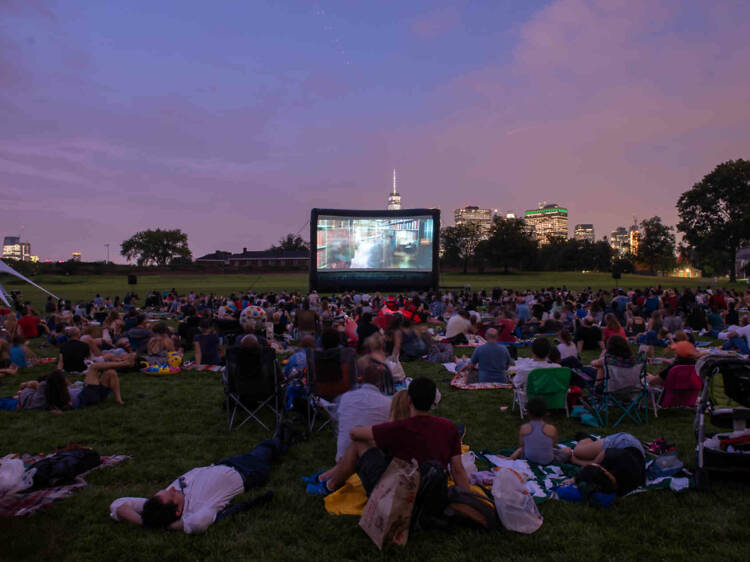 Free outdoor film screenings are back on Governors Island for the summer! The Trust for Governors Island and Film at Lincoln Center on September 2 is screening Sidney Lumet’s The Wiz. As usual, you'll get to claim a spot on the Parade Ground, the expansive eight-acre lawn wide-open views of lower Manhattan that defines the island.

Screenings are free and open to the public with pre-show entertainment kicking off at 7pm and the films beginning at dusk. Food and drinks will be available for purchase, including a beer garden by Threes Brewing along with food from Pizza Yard and additional Governors Island vendors to be announced. 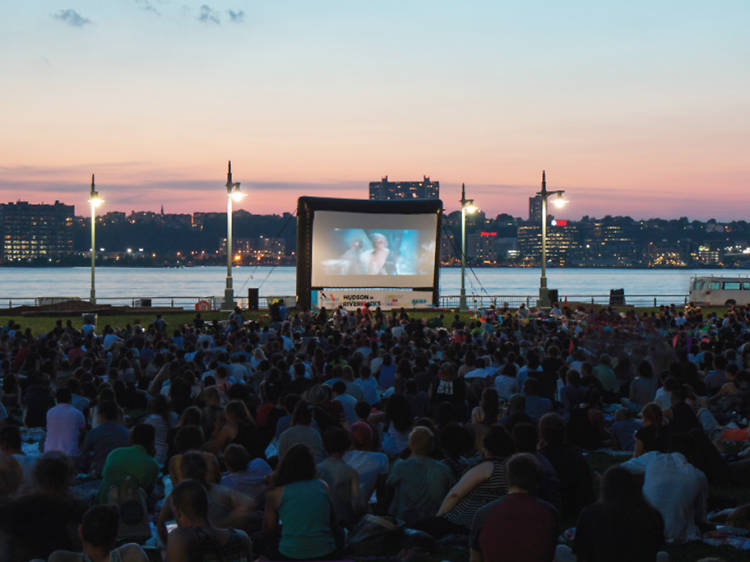 4. NYC Parks Movies Under the Stars

NYC Parks and the Mayor’s Office of Media and Entertainment have made it possible for New Yorkers across the boroughs to find a free outdoor movie screening near them every week. These family-friendly screenings are held in the city's parks and playgrounds, ranging from great new movies to all-time classics. Each screening has chairs reserved for seniors and people with disabilities so that everyone can enjoy a good movie. So pack up a picnic, find a great spot, and enjoy the show. The massive, full schedule is here. 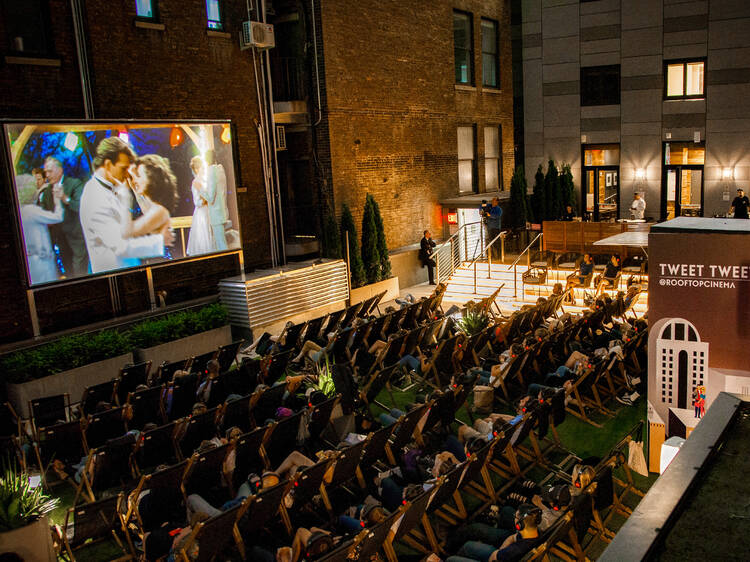 The schedule for this summer's Rooftop Cinema Club in midtown—at 60 West 37th Street, on the third floor of the Embassy Suits by Hilton New York Manhattan Times Square—is officially out and it's looking stacked. In addition to the range of productions that will be screened, patrons will get to order from a full food and bar menu while enjoying the show on a state-of-the-art LED screen that allows for multiple movie times a day (family-friendly screening will happen before 4:30pm!). Below, we highlight just some of the awesome movies that are included in the roster:

June 23: Casablanca and The Unbearable Weight of Massive Talent

June 24: Black Panther, The Adventures of Priscilla, Queen of the Desert and The Rocky Horror Picture Show

June 25: The Little Mermaid, Blade Runner and The Thing

June 26: Up and Beetlejuice

June 28: 10 Things I Hate About You, Romeo + Juliet and Bridesmaids

July 1: Back to the Future, Raising Arizona

July 3: The Sandlot, A League of Their Own, Dazed and Confused and The Unbearable Weight of Massive Talent

July 6: Uncharted and The Unbearable Weight of Massive Talent

July 8: The French Dispatch and Eternal Sunshine of the Spotless Mind

July 13: The Emperor's New Groove and Get Out

July 14: Save the Last Dance, Some Like It Hot and Con Air

July 16: The Princess and the Frog, Ghostbusters, Candyman and 10 Things I Hate About You

July 24: The Greatest Showman: Sing-Along, Harry Potter and the Prisoner of Azkaban and Crazy, Stupid, Love

July 26: Up, Casablanca, and Pretty Woman

July 28: Holes, Thelma & Lousie and Do the Right Thing

July 29: 10 Things I Hate About You, Pulp Fiction and A Nightmare on Elm Street

July 30: The Princess Bride, Breakfast At Tiffany's, About Last Night and Everything Everywhere All At Once

July 31: Coco, Harry Potter and the Goblet of Fire, Death Becomes Her and Top Gun

August 1: Spider-Man: No Way Home, Back to the Future and  The Big Lebowski

August 2: A Goofy Movie, Sleepless in Seattle and The Shining

August 4: Shrek, You've Got Mail and Call Me By Your Name

August 6: Ratatouille, Harry Potter and the Order of the Phoenix, Waiting to Exhale and American Psycho

August 7: Beauty and the Beast (1991), Roman Holiday, The Wedding Singer and Love Jones

August 8: The Goonies, Lost in Translation and Leon the Professional

August 9: Monsters Inc., The Great Gatsby and The Silence of the Lambs

August 10: Superbad and The Wood

August 11: Moonstruck, When Harry Met Sally and The Bodyguard

August 12: The Princess Diaries, 10 Things I Hate About You, and Set It Off

August 14: She's All That, Before Sunrise and High Fidelity

August 16: Up, Jurassic Park and Anchorman

August 17: Raiders of the Lost Ark, Scream and Moulin Rouge!

August 20: Harry Potter and the Deathly Hallows: Part I, The Romance, Crazy Rich Asians and Coming to America

August 21: The Little Mermaid, The Seven Year Itch, Say Anything and Moonlight

August 22: Clueless, The Breakfast Club and A Star is Born

August 27: Paddington 2 and Harry Potter, the Deathly Hallows Part II, The Notebook and 500 Days of Summer

August 30: Save the Last Dance, Something's Gotta Give and Brown Sugar 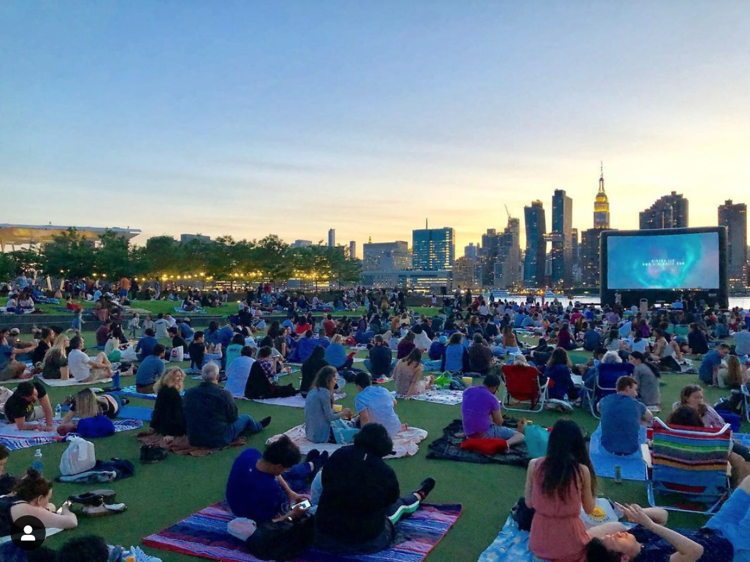 CinemaLIC is back on the Long Island City waterfront! Take in an outdoor movie with incredible views of the Manhattan skyline—all for free—on a state-of-the-art, 30-foot inflatable screen each month at Hunters Point Park South. Films begin at sundown. Below is the line-up: 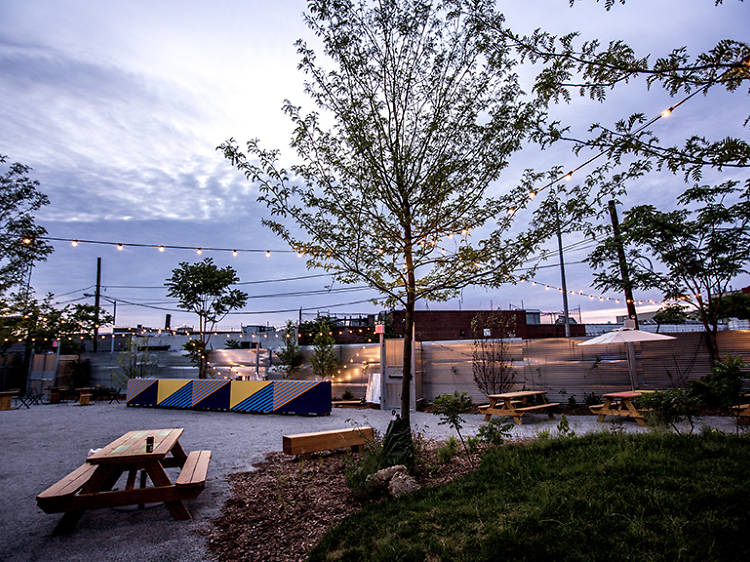 With its top-flight sound system, sophisticated menu and deeply chill vibes, Nowadays is a super low-key and unique spot to take in a flick. When it's not pumping jams from live DJs, Nowadays screens music documentaries (usually during the week) for no extra cost, starting at sundown.

You can find out what's up next here. 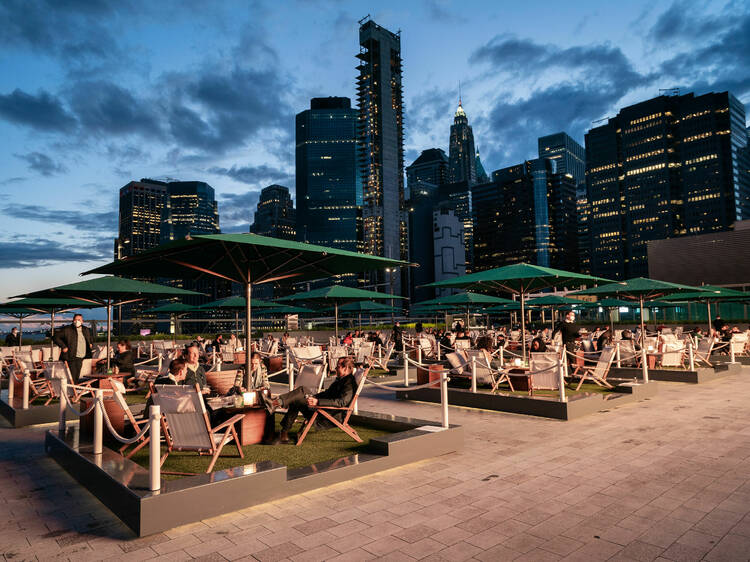 The Seaport Cinema is back with screenings on Monday nights that have incredible sweeping views of the Lower Manhattan skyline and the Brooklyn Bridge. Each screening begins at 7pm and is free to attend but is first-come, first-served. 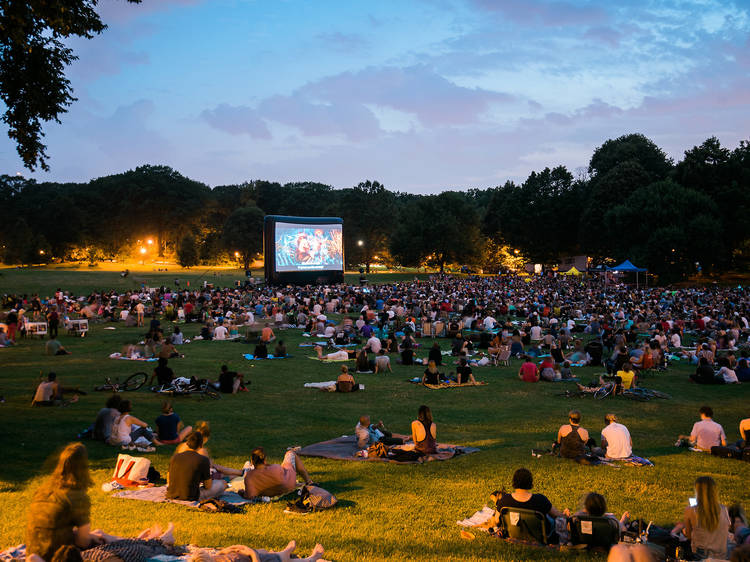 10. Summer Movies Under the Stars

It's time to head back to Prospect Park for the annual series, A Summer Movie Under the Stars. Hosted by Brooklyn Magazine, Prospect Park Alliance and the office of the Brooklyn Borough President, the series kicks off Wednesday, August 3, and runs for four consecutive Wednesdays through August 24, at the north end of the Prospect Park Long Meadow. Films begin shortly after sundown. Each movie screening is free and open to the public and RSVPs are not required for entry. 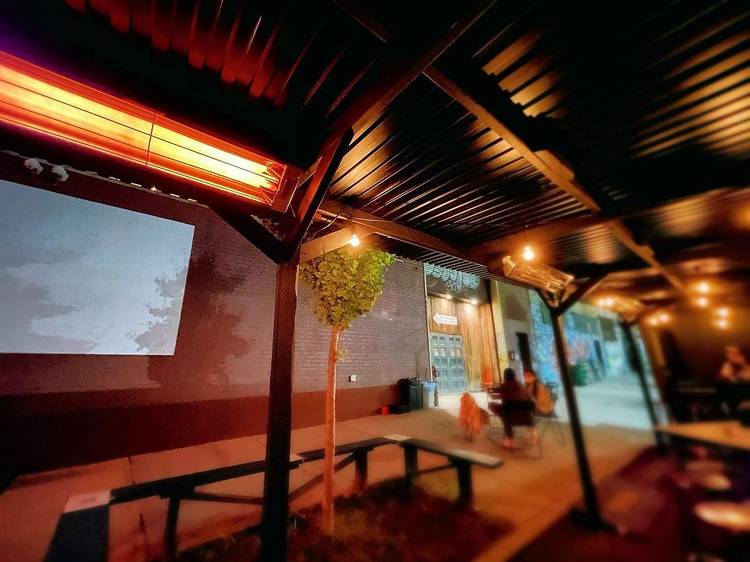 Bushwick's Syndicated, known for being a one-stop shop for great food and films, is screening movies outside as well. Each night, films begin at 9pm and seating is first-come, first-served but free, but you should order something off the menu. Don't miss the crowd-pleasing wings and seasoned popcorn and the new Pink Flamingo made with Mezcal, fresh watermelon juice, ginger syrup and lemon.

Make sure to check out the extensive monthly screening lineup here. 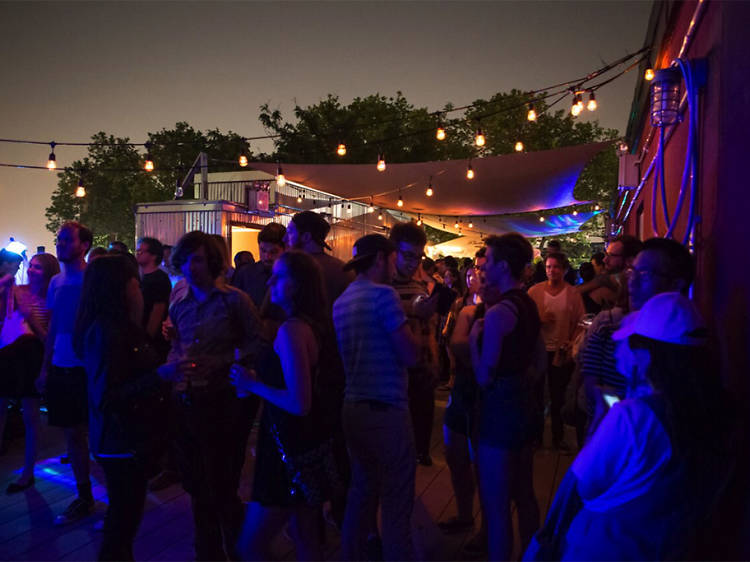 Our Wicked Lady’s Rooftop Movie Mondays are back. Head up to the rooftop around 8:30pm to catch the screening and end your night in its main bar for Nite Owl Karaoke. Here’s the full movie lineup:
August 15: Boomerang
August 22: Willy Wonka and the Chocolate Factory
August 29: Dirty Dancing
September 12: Bill & Ted's Excellent Adventure
September 19: Grease 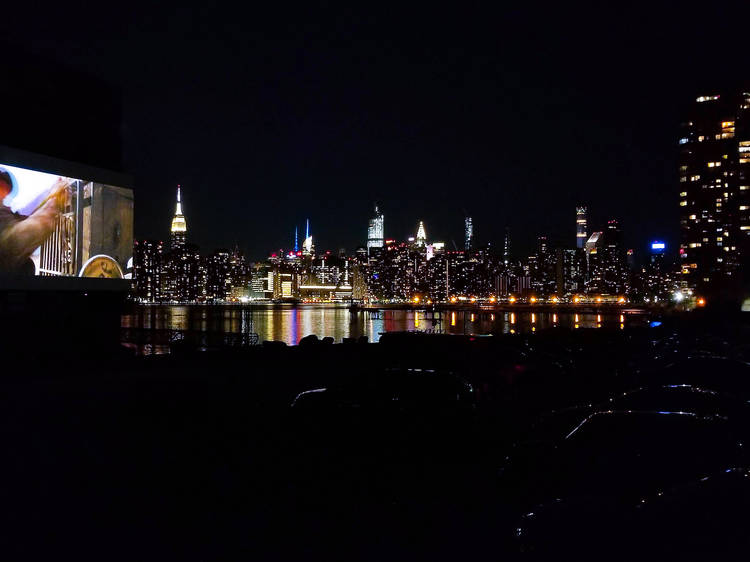 This Greenpoint, Brooklyn drive-in offers killer views of Manhattan's skyline along with popular movie classics at 1 Oak Street across the river from downtown Manhattan—a site that’s been used for shooting Fendi and Converse ads as well as the opening credits of Saturday Night Live. There's a concession stand on site and if you don't have a car, don't worry, you can rent out a chair ($22) to take in the flick. You can find the full, jam-packed schedule here. Tickets range from $22 to $80.