Here are our reviews.

This morning, the Times Square Alliance revealed the latest additions to New York City's busiest hub: a quartet of holiday "Show Globes" inspired by four hit Broadway musicals. You can't miss them. They're on the Broadway Plaza between 44th and 45th Streets, and they're quite large—big enough for a lot of people to sit on at once, though signs nearby remind us that we are not to sit on them. So do not sit on them, please, but do feel free to stand and gawk at the Broadway tributes on display in big shiny bubbles that are, at least for now, transparent (though Times Square has a way of dirtying things up). These Show Globes, which contain shows but no snow, will be in Times Square through December 26, 2019. Here are our reviews.

[Update: The Show Globes have returned to Times Square from November 3 through December 26, 2021. They are now located on Broadway between 45th and 46th Streets.] 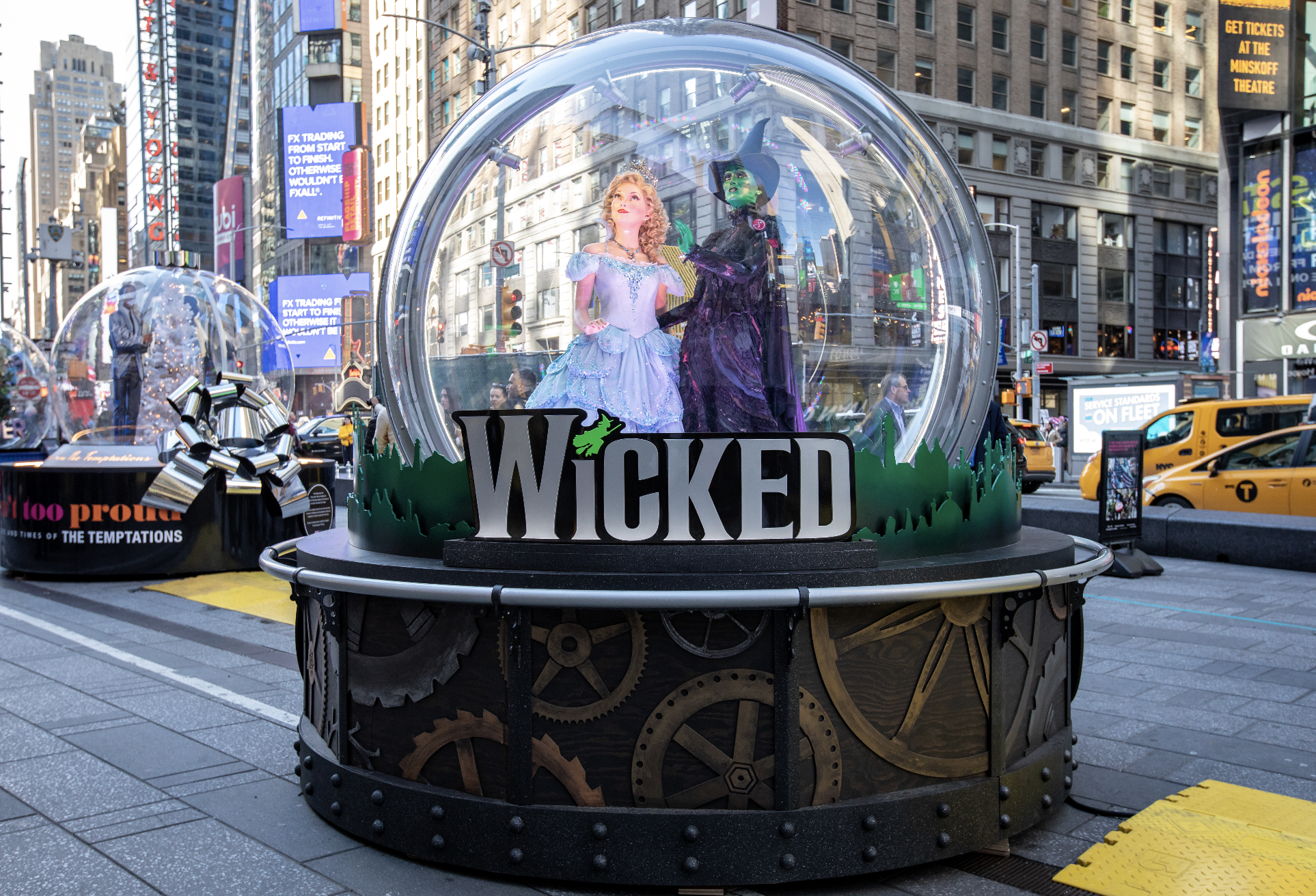 4. Wicked
Rating: Two globes 🔮🔮
You would think that since Wicked is the only show on Broadway in which a character actually travels in a bubble, it would be simple enough to depict the show through the use of a bubble. But you would be wrong! You would be wrong about that. Designed by the show's associate scenic designer, Edward Pierce, Wicked's disappointing display barely gestures at the production's steampunk aesthetic. Instead, it gives us a pair of stiff mannequins dolled up like Glinda and Elphaba as they might appear in the window of a pop-up Halloween store. 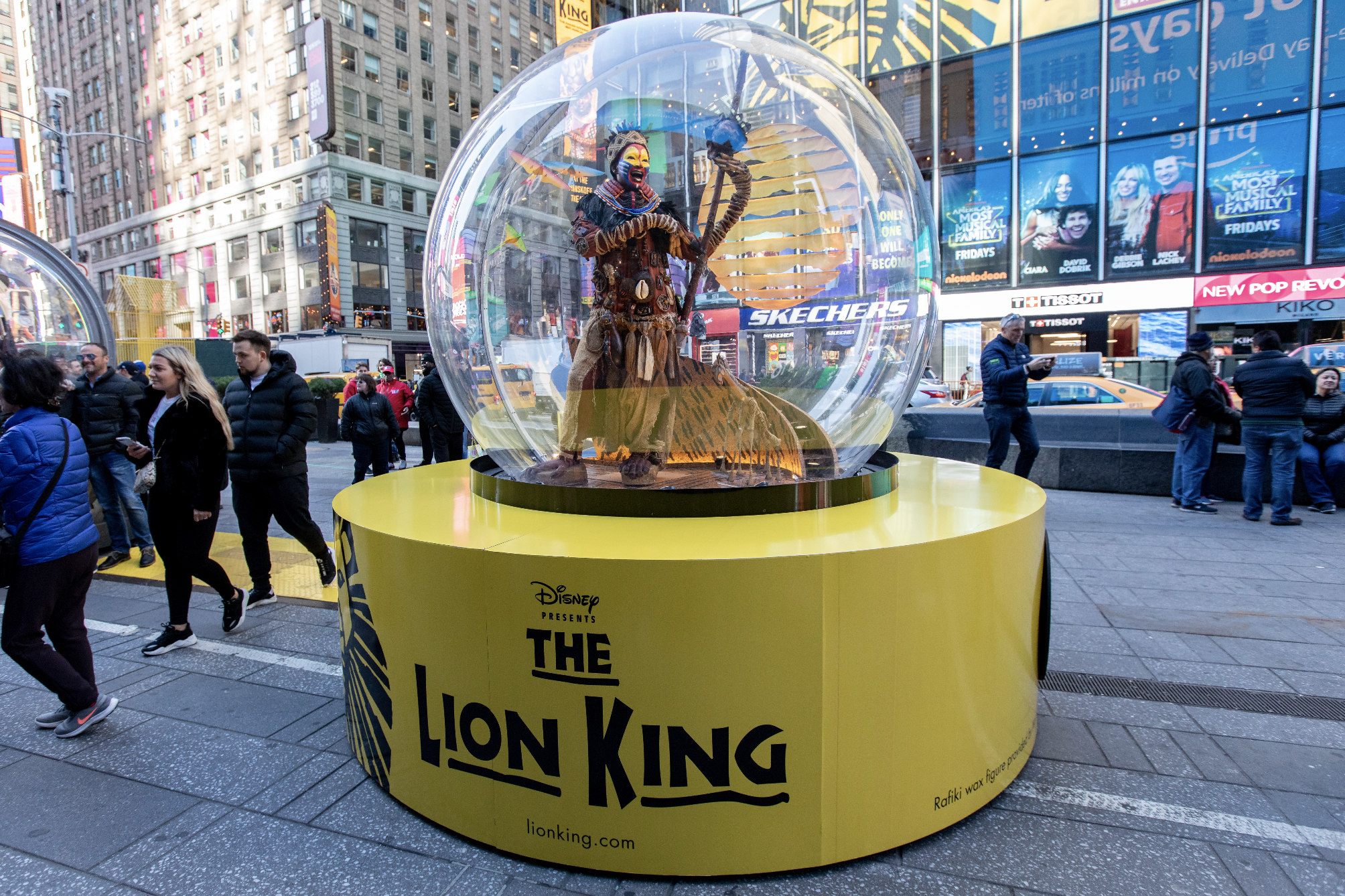 3. The Lion King
Rating: Three globes 🔮🔮🔮
The Lion King has been running even longer than Wicked (it is the third-longest-running show in Broadway history, whereas Wicked is merely the fifth-), but this globe has a greater sense of freshness. Fashioned by associate scenic designer Peter Eastman, it features the mandrill priest Rafiki in colorful regalia, surrounded by simple but effective evocations of the astonishing world of Julie Taymor's production. The expressive central wax figure, provided by Madame Tussaud’s, helps gives life to this three-dimensional circle. 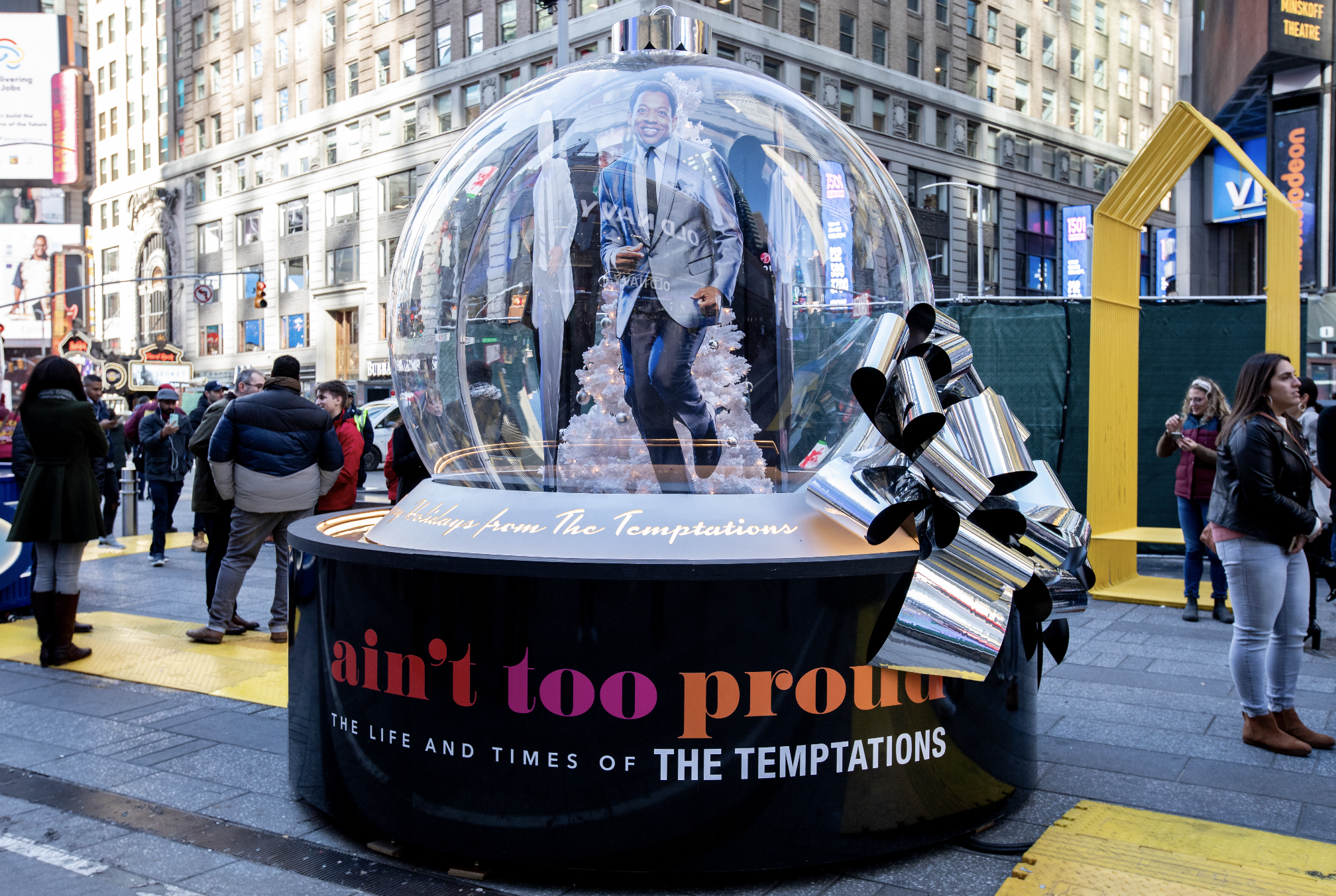 2. Ain't Too Proud—The Life and Times of the Temptations
Rating: Three globes 🔮🔮🔮
Five members of the Temptations rotate around a glitzy white pine tree in this globe, the most dynamic and also the most overtly holiday-themed of the four. Designer Robert Brill cleverly evokes his own work for the Broadway production, in which conveyer belts and turntables keep the action moving smoothly along (and convey a subtle sense of Motown as a literal factory of hits). The somewhat chintzy-looking figures themselves, however—one-inch-thick renderings of the main cast members—don't take full advantage of their in-the-round set-up. 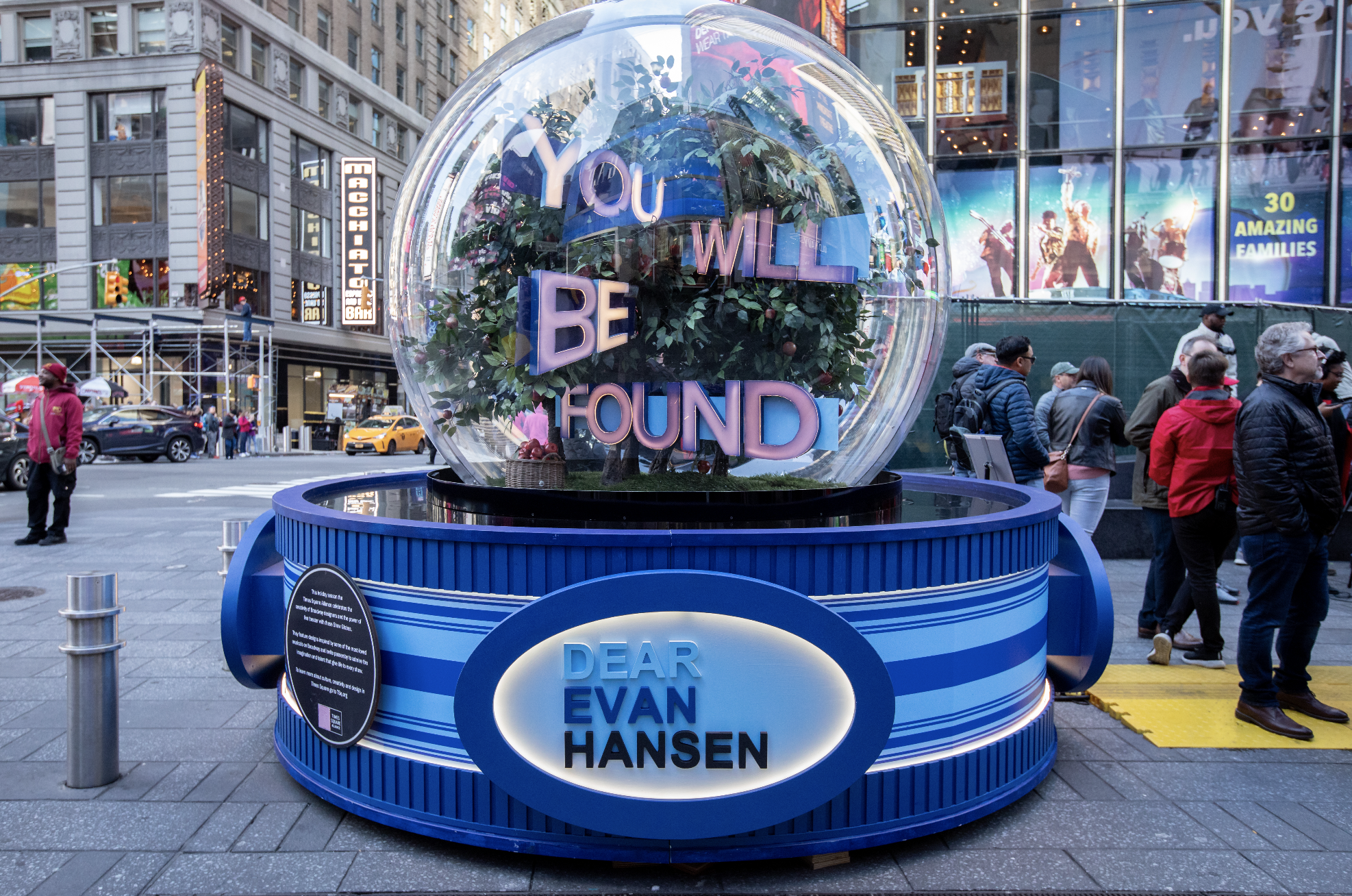 1. Dear Evan Hansen
Rating: Four globes 🔮🔮🔮🔮
David Korins, the set designer for Dear Evan Hansen (as well as for Hamilton and Beetlejuice, among others), opted for the least literal Show Globe. None of the musical's characters appear in the sphere. Instead it is filled, nearly to bursting, with the apple tree from the show's finale, trimmed with bold lettering that spells out two lyrics: "You will be found" and "All we see is sky for forever." It's the most modern-looking offering in the group, and the one that uses its location in public space the most ambitiously: You have to walk around the globe to take it all in, and it's worth your little orbit.