An actual neighborhood destination in a touristy business district.

NYC tourist regions like Times Square, Grand Central and Bryant Park have plenty of restaurants to choose from, but few that capture that often intangible neighborhood-like quality. Columbus Circle—right by Central Park and tons of commercial real estate, decently adjacent to theater and museums—isn’t any different. But in February, the area got a lovely new spot that looks and feels like it would be at home anywhere in town.

All & Sundry, across from the big mall on 58th Street, follows Sophie Bruschi, Mike O’Sullivan and Danny Grace’s Irish pubs Harley’s in Clinton Hill and Grace’s in the West Village. It's a departure from the trio’s previous Emerald Isle-inspired ventures. (O’Sullivan and Grace are from Ireland.) It’s quickly emerged as the immediate area’s best easy place to grab a drink and some good food.

Billed as a bistro and bar, it has a strip of street and sidewalk seats outside. Down a few steps inside, a little pastel velvet-upholstered nook with room for about half-a-dozen is strewn with throw pillows. A pretty green bar with glass shelves and subtly colorful globe lights overhead is farther back. A row of high-top tables is to the left. Some Instagram elements are present–a single wooden swing is fixed inside a small alcove–without veering into the Immersive Restaurant Experience zone. It’s cute before the point of cloying.

The cocktail menu’s Stanford ($16) is described as a cosmo snow cone with vodka, triple sec, cranberry and lime. It sounds like the bar’s most likely Instagram Thing, but like the decor, it only flirts with reaching over the top. It isn’t quite a frozen, or especially reminiscent of those childhood summer treats, but rather a kind of hybrid that doesn’t quite coalesce. Pale liquid is poured over crushed ice and a lot either gets lost in the shards somewhere or it’s just a paltry portion–even keeping in mind that ice can be deceiving. And because it isn’t truly a blended drink, straw tunnels keep forming and you have to continuously stab around for new reservoirs that tap out fast. The flavor’s pale, too, but not unpleasant.

This is a blip and the rest of the cocktail list is solid and suitably presented. The draft manhattan ($17) is as boozy and bracing as any made à la minute and the tequila-based Piña Express ($16) is a sweet, beachy libation that looks ahead to summer. A short list of martinis (all $17) is the latest to fulfill a trend that I identified last October.

Although this bistro and bar more resembles the latter—plenty of space for “just drinks,” backless stools that don’t invite lengthy tastings and enough room for the order queue to get a few people deep—All & Sunday’s lunch and dinner menu has plenty to choose from. The oysters Rockefeller’s five shells ($15) top the familiar app with Monterey Jack cheese to decadent, delicious effect that even oyster scorners might try twice. The simpler but equally divisive olive starter ($10) is similar, frying the pitless fruits to a golden-crusted finish and pairing them with a lemon goat cheese spread.

The rest is as varied as expected given the location and its potential proclivities: Charcuterie ($22/half, $44/full), cheese sticks with tomato sauce ($12), sandwiches, salads and fries for the table ($10). And it's better than it might hypothetically need to be to earn success at this address; crafted to keep locals coming back. The kitchen takes general interest items and dabs them with subtle improvements while keeping their mass appeal intact.

A room service staple that you’ll likely find nearby, the turkey club ($20, includes fries) loses the superfluous middle bread and uses house-roasted turkey, cheddar, smoked bacon, lettuce tomato and mayo to fill it in. The pesto spaghetti, dubbed “pumpkin seeds pesto pasta” ($14) on the menu, adds pepitas to the fresh, verdant mix. (Expect sensations of fresh cut grass in the spring rather than orangey autumnal mush.) And the steak frites’ ribeye ($35) is prepared to a perfect medium rare, sometimes unseen even at established steakhouses that still seem to deliver something a little over or under. Eleven-ounces are sliced and served with chimichurri and parmesan-speckled pommes.

A lot of after work and/or tourist destinations get by on proximity to those captive audiences, and the assumption that both groups will parrot the caveat that going out is really about the company. All & Sundry’s food, drink and ambiance are better than that: take someone you hate today.

The Vibe: The neighborhood’s most neighborhood-y spot in a pretty space with some under-the-top photo ops and an easy, comfortable environment.

The Drinks: Classic and novel cocktails, wine and beer. Champagne is $15 a glass and $60 a bottle during happy hour every day from noon to 7pm.

Time Out Tip: All & Sundry accepts reservations for up to 20 guests and has a similarly designed private event space upstairs that can accommodate 120.

All & Sundry is located at 312 West 58th Street and is open every day from noon to 4am. The kitchen closes at midnight. 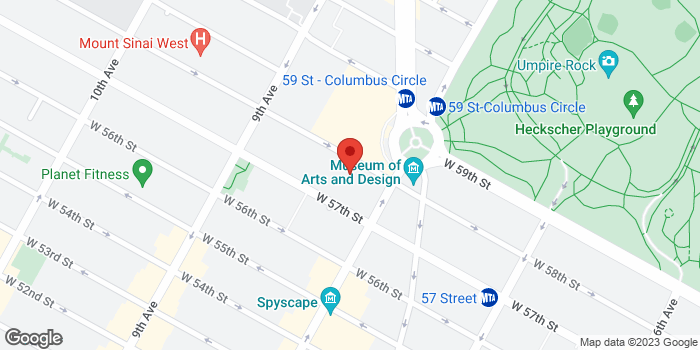 Opening hours:
Every day from noon to 4am. The kitchen closes at midnight.