The 16 best frozen cocktails in NYC

We're calling it—frozens are officially the drink of summer 2021.

Frozen cocktails have been unfairly maligned in NYC and beyond for far too long. Too much of this and not enough of that, they’re often relegated to the same mocking zone occasionally occupied by rosé and White Claw. But frozens are the true marvels of summer drinking, icy blank canvases turned into chilling margaritas, piña coladas, daiquiris, G&Ts, cosmopolitans, and all manner of novel combinations just waiting to be invented. If you can dream it, you can drink it.

“I think that frozen drinks are outstanding,” PDT owner Jeff Bell told us in a recent interview. “I don’t think frozen drinks were received well ten years ago. I think everybody was still in this moral high ground, high horse of like, ‘Oh, that’s a trashy cocktail because it’s frozen.'”

To eschew a category so broad would be akin to waving one’s hand and swearing off food, music, or even love, forever. Now, frozen cocktails are here to collect their due. Their versatility, growing ubiquity and celebratory nature make these sippable manifestations of joy the official drink of the first summer of the rest of our lives.

PDT’s Bell is one of a few highly regarded NYC beverage professionals adding frozen drinks to their menus this summer. Long Island Bar’s Toby Cecchini did the same, bringing in a two-column Spaceman machine last year. These new additions to the genre, along with our erstwhile favorites, are the best frozen cocktails in New York City right now. 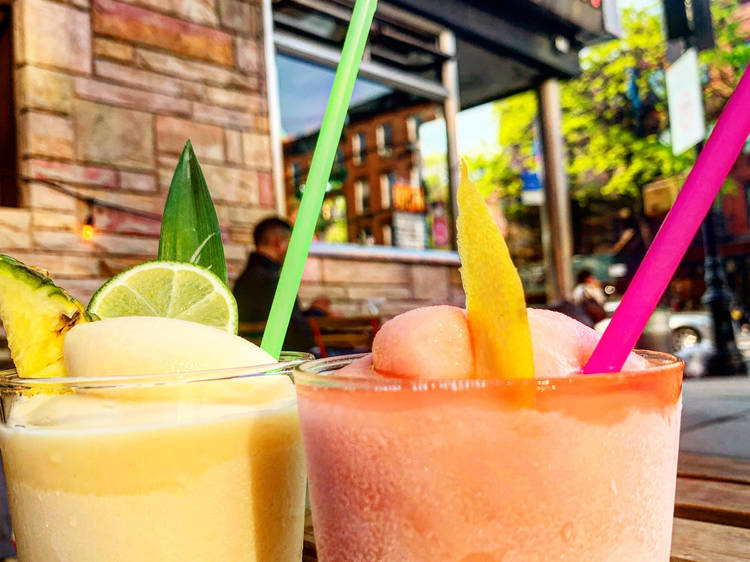 Once you learn that Long Island Bar’s proprietor was one of the smattering of people credited with conceptualizing the cocktail that went on to be Sex and the City’s fifth lead, it follows that the corner spot would have a frozen cosmo. This one’s more opaque than its liquid BFF, with orangey-pink crystals packed tight like a real Miranda, though the subtly retro decor is a little more relaxed. 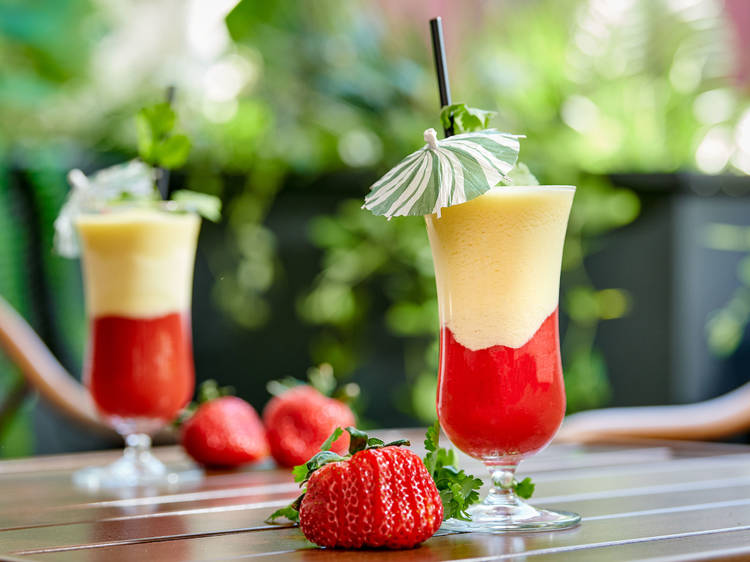 2. The Wasabi + Cilantro at Mace

The Wasabi + Cilantro at Mace’s brand new zinc bar is a real beauty. They take a strawberry daiquiri slushee blend of wasabi-infused rum, strawberries, angelica root, vanilla and lime, top it with a bacon-washed rum, pineapple, coconut, plantain, lime and cilantro piña colada, and knight it all with the frozen’s best friend: a paper parasol. 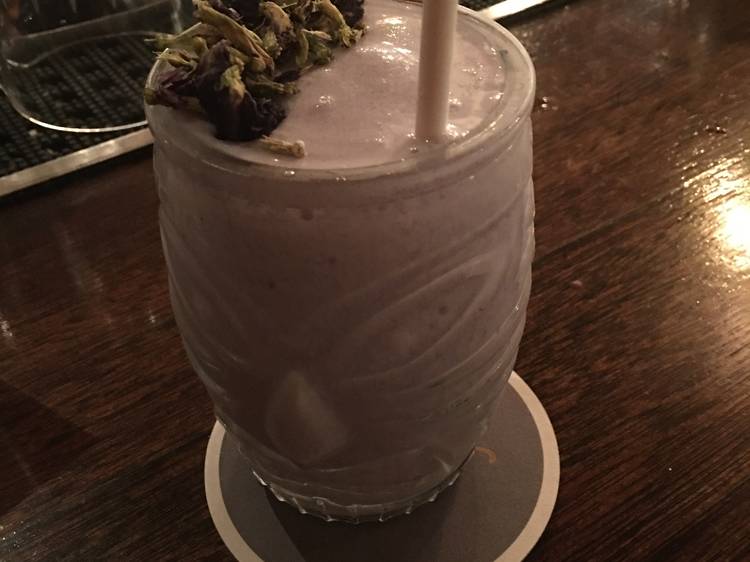 3. The Kalo Colada at Clover Club

Yes, moderation is the key to success, happiness and unending applause from friends and strangers alike, but the best things in life are tough to walk away from, and Clover Club’s Kalo Colada is one of ‘em. The made-to-order rum-based dazzler’s condensed coconut milk makes it just sweet enough, and it’s so silky it’s like they’re using ice from a better dimension. 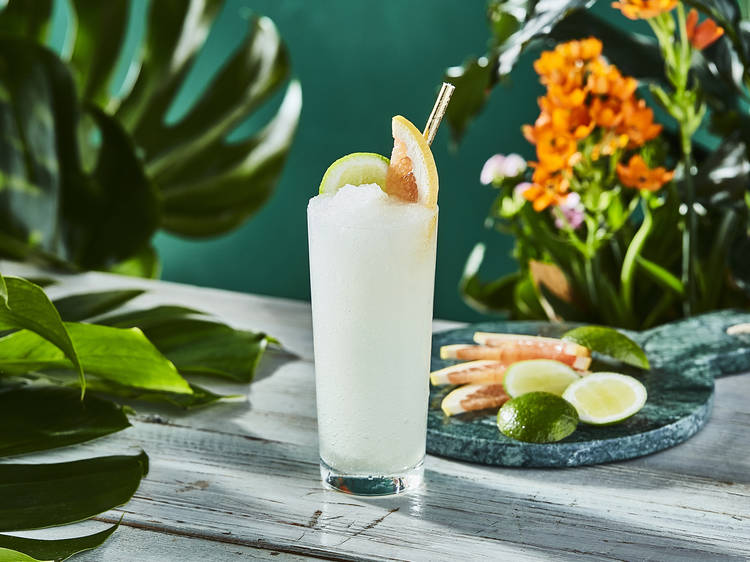 4. The Frozen Gin and Tonic at PDT Tropicale

The newly-opened outdoor annex of this famed cocktailer has a couple of things you won’t get no matter how long you wait for a table inside: sunshine and frozens. The frozen gin and tonic takes history’s easiest cocktail and runs it through the frostifyer before pouring it into a tall glass. 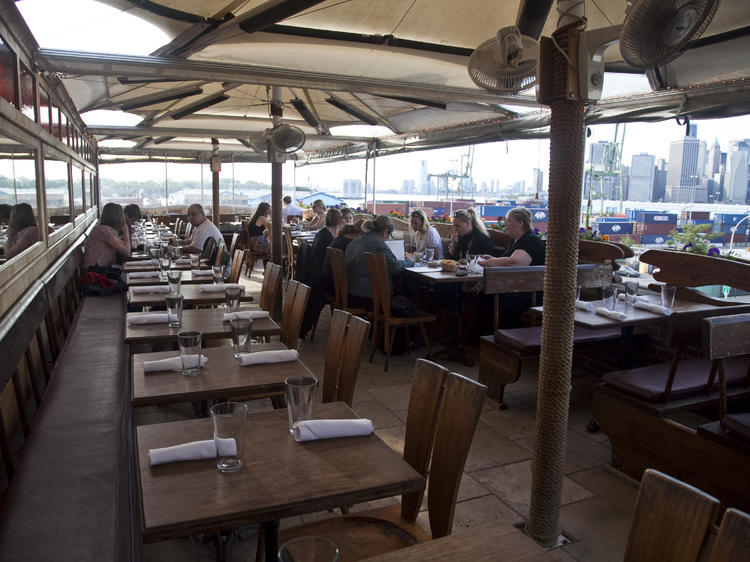 5. The Frozen Margarita at Alma

Although we drink frozen margaritas year round, they soar in popularity once the weather warms up. And Alma’s is best in class. A pale shade of lime, the icy libation is a mix of the tart citrus with tequila, triple sec and agave. It’s served in a short glass that minimizes melting before you can reach its end, which doesn’t take too long while you’re gazing at the skyline view, anyway. 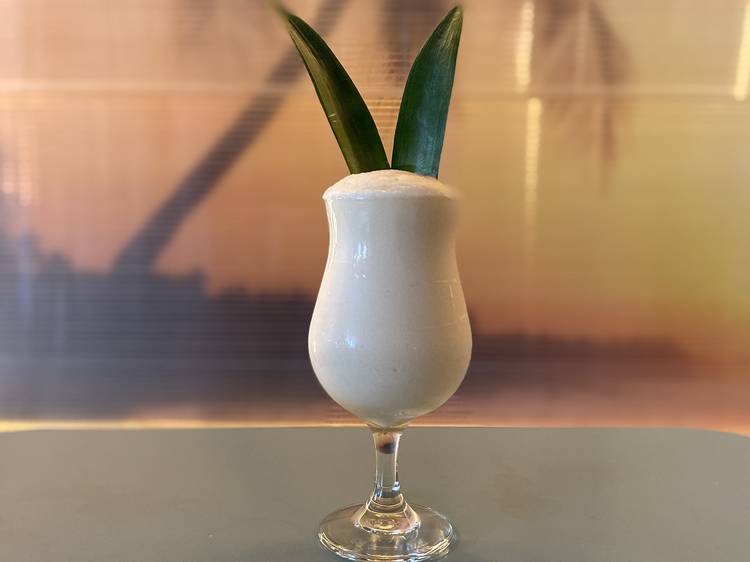 6. The Sundowner at Sally Roots

Sally Roots has three frozen cocktails, and they tell us the most popular is the Sundowner. It blends coconut, guava, orange juice, pineapple juice, lime and “All the Rums.” That final key ingredient is the bar’s proprietary house blend of dark, light and overproof rums. You can also get the Sundowner “fun sized,” which, counter to conventional candy wisdom, is a double. Or you can add an additional All the Rums floater. Whether you do both is between you and destiny. 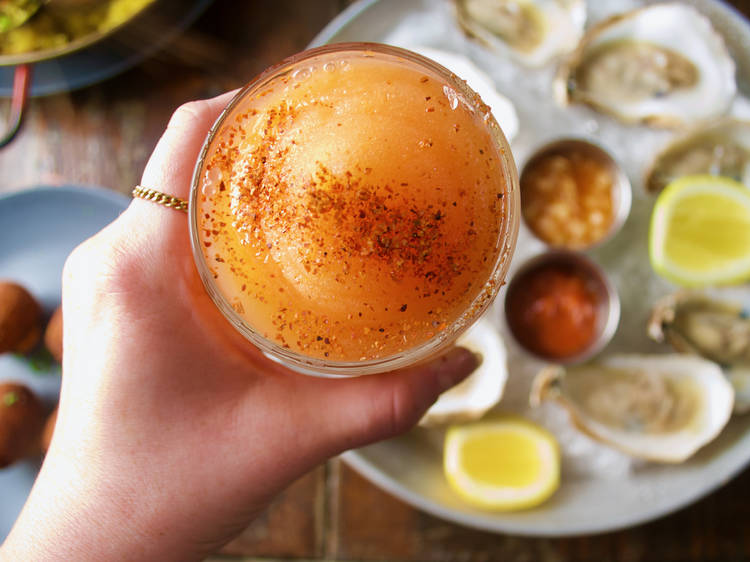 7. The Cuj at Maracuja

The new iteration of this long-running bar eschews a cocktail menu in favor bartenders who promise, “if you know it, we can make it.” It does, however, have a formal frozen on offer. We guess those are harder to whip up on the fly. The Cuj includes tequila, Aperol, Suze, passionfruit and lime, ideally enjoyed in Maracuja’s recently reopened secret garden. 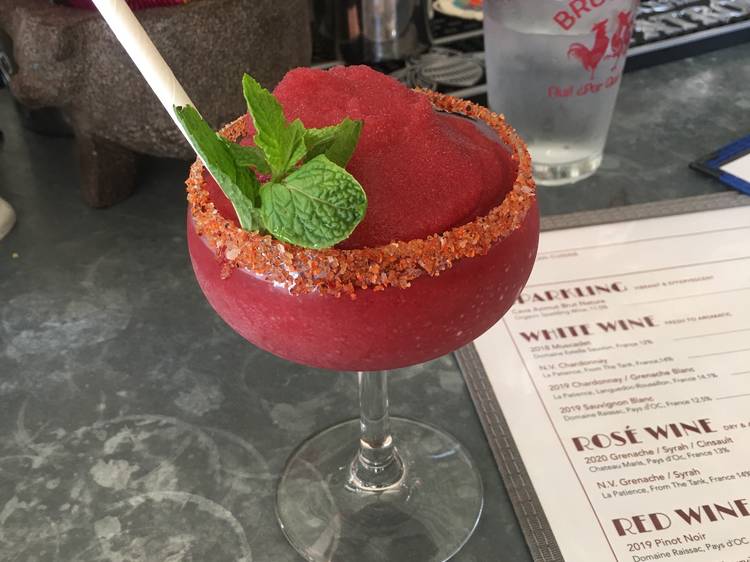 We’ve been quietly wishing that Jolie would add frozens to its terrific drink list for years, and now that secret desire has been granted. The Smith Street staple changes up the offerings from time to time, and, in addition to the frozen raspberry margarita bursting with deep fruit flavor, we’ve previously enjoyed the mango variety. 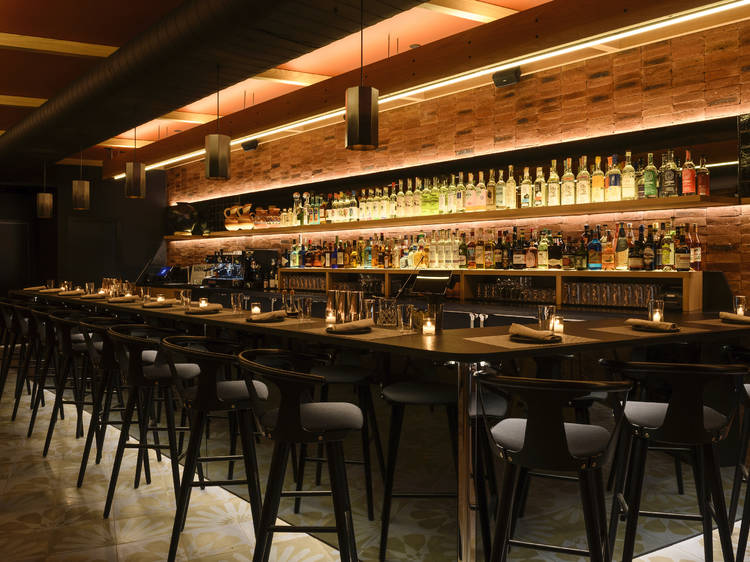 9. The This Güey at Tacos Güey

The drinks at this fantastic Flatiron newcomer near Union Square are worth a stop on their own, and two standouts are frozen: The This Güey, made with mezcal, Oaxacan rum, pineapple, honey and mint, and the That Güey, with tequila, curaçao, limón and tajín. 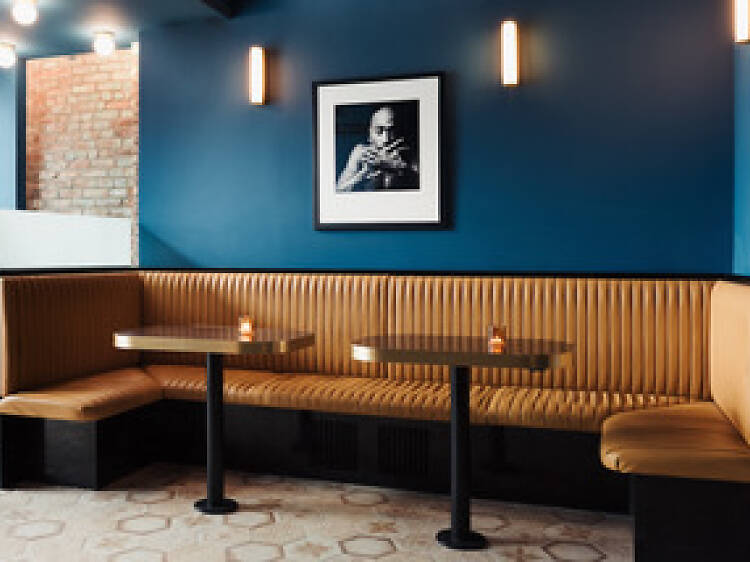 10. The Special at Bunton’s World Famous

Every angle of Bunton’s interior is so finely styled it’ll take you many happy returns to run out of selfie opportunities. Its 1,400-square-foot patio isn’t half bad, either, and it’s especially suited to savoring drinks on sweetly breezy evenings. You’ll have to keep coming back, in fact, to keep up with its ever-rotating frozen cocktails, which have previously included nicely garnished piña coladas and hurricanes. 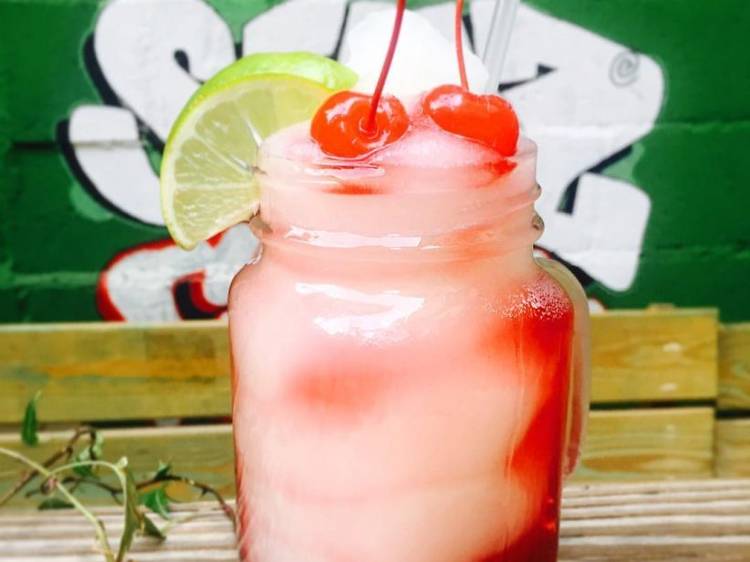 A downtown go-to for nearly a quarter-century, Sweet and Vicious has seven frozen margarita varieties, all served in mason jars with a cherry on top. In addition to classic, its strawberry, peach, mango and guava options are flavored with real fruit, and pomegranate and jalapeño get their kick from infused booze. Sweet and Vicious’ patio, in particular, is a comfortable place to imbibe aside from the crowds of shoppers in nearby Soho and Nolita. 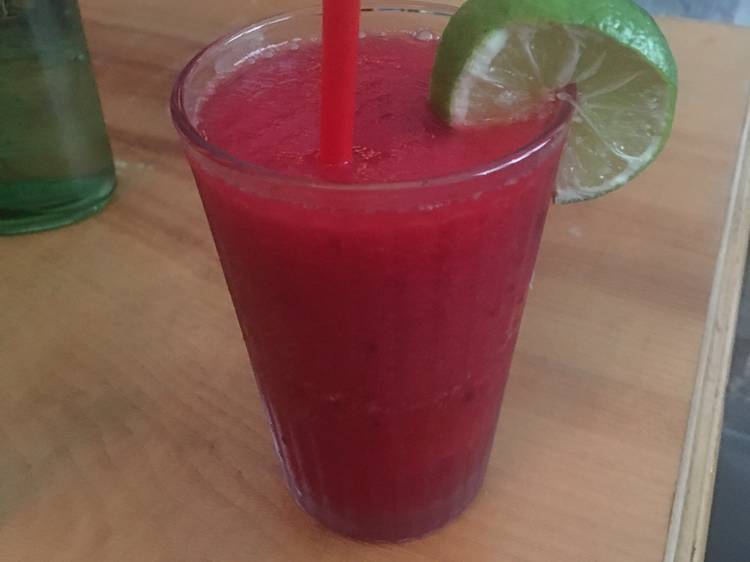 Another longtime neighborhood favorite but newcomer to the frozen drink landscape, Veckslers has been churning out a parade of icy hits all summer long. Our favorite so far is the cherry lime gin rickey, which leaps over the ubiquitous candy-colored “red” flavor to successfully capture the essence of peak-form stone fruit with a punchy pop. 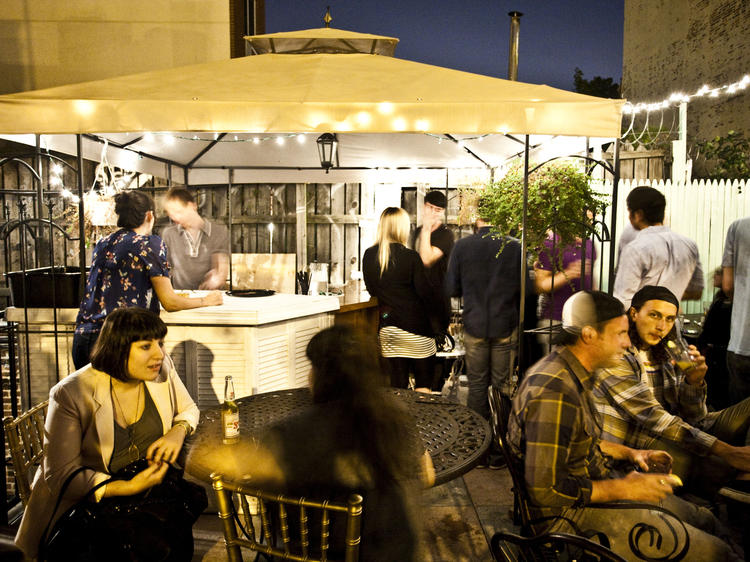 13. The Frozen Margarita at Night of Joy

This casual low-rise rooftop makes it easy to pick a tipple and stick with it. Though it's known to imbue its frozen margaritas with additional flavors, our favorite remains the classic lime. It’s served in a darling soda shoppe-style glass that might even inspire you to share a sip. 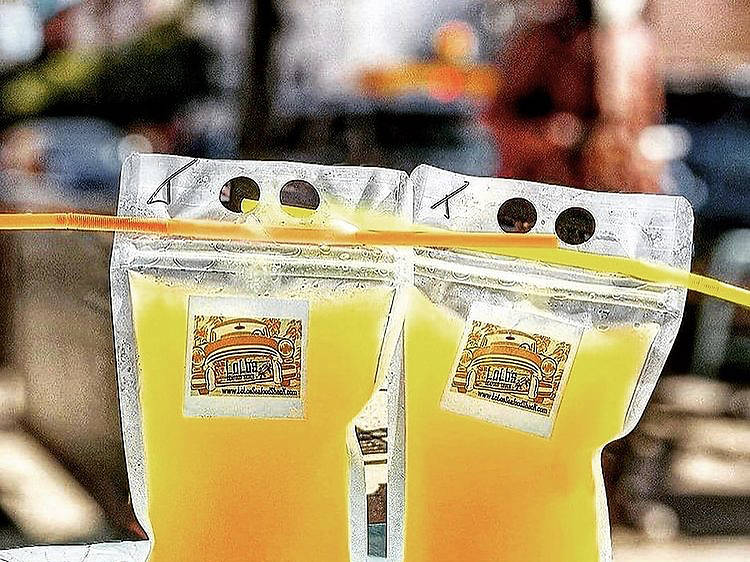 The slushies at Lolo’s Seafood Shack are available with three types of spirits: coconut rum, tequila and vodka. Depending on your tolerance, you can collect ‘em all in one sitting, or keep coming back to find a favorite while you lounge on the back patio. Lolo’s has plenty of crab leg, shrimp and crawfish combos to keep you fortified in either case. 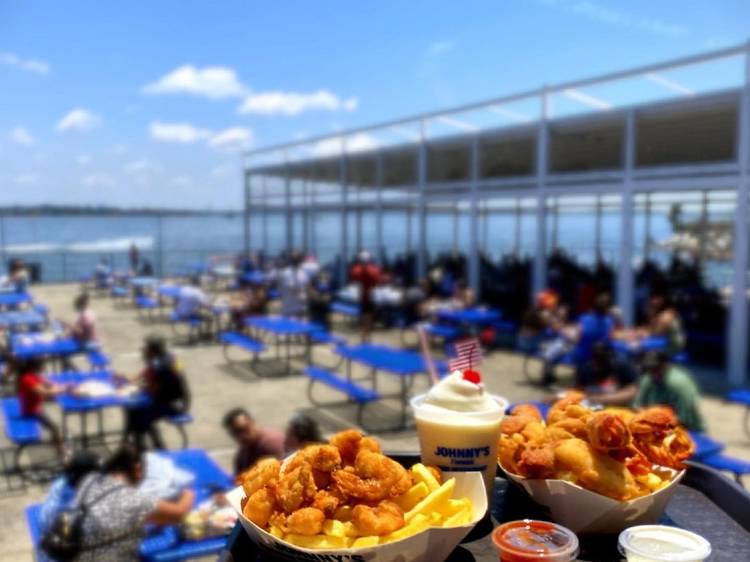 This waterside spot shines among the jewels of the New York City crown that is City Island. Order your fried lobster tails, frog legs, oysters and clams inside, add a cognac-based Henny colada, nab a patio picnic table and enjoy the view of the Long Island Sound. Grab cash before you go and prepare for lines. 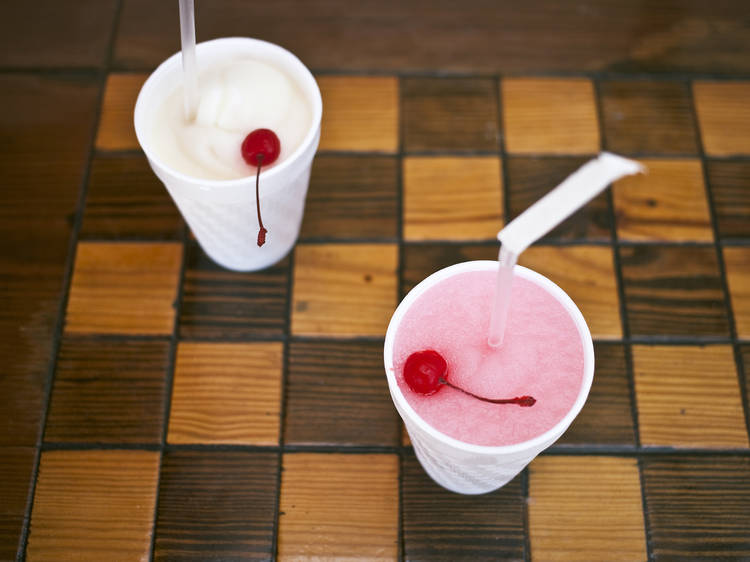 16. The Frozen Piña Colada at Connolly’s

Drinks at the beach are a time-honored tradition pre-dating even this Rockaway staple, which has been open in various iterations since the 1920s. The basement pub is around the corner from Rockaway Beach, so if you’re planning on adding $1 floaters to its styrofoam-cupped piña coladas after a day in the sun, be sure to hydrate. Or, if you’re planning on bringing those babies back to the beach, we won’t tell anyone what’s in the nondescript vessels.