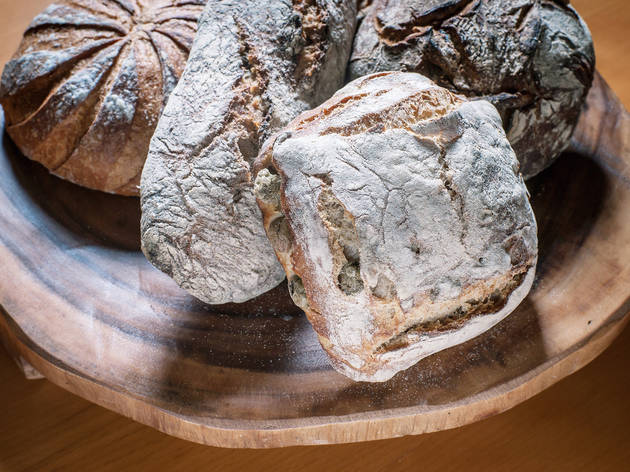 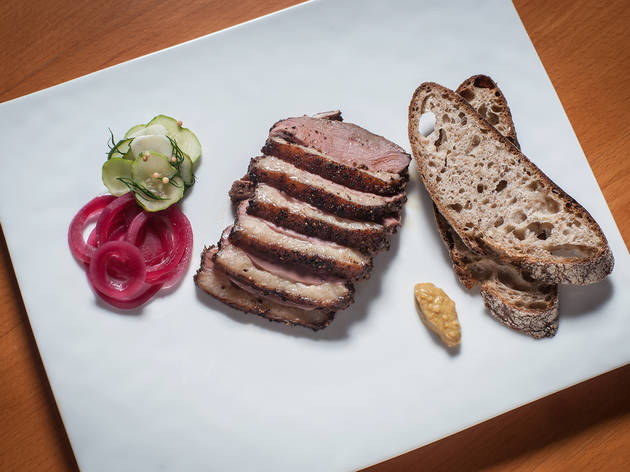 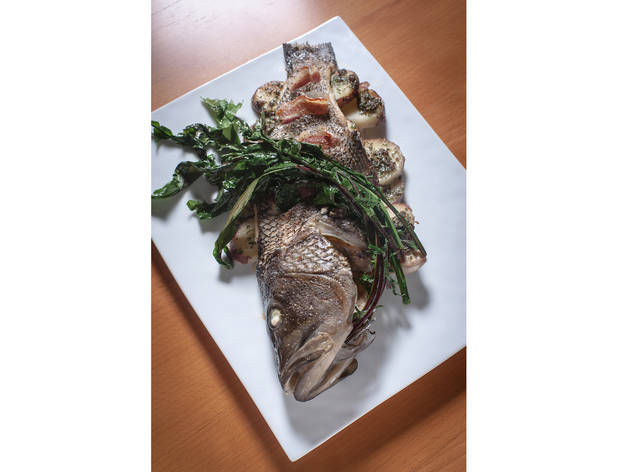 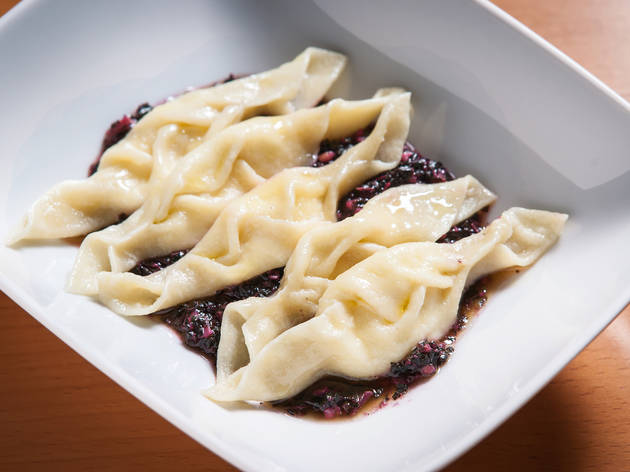 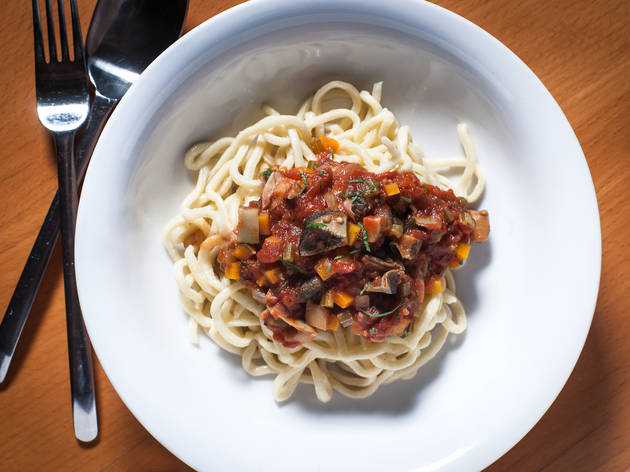 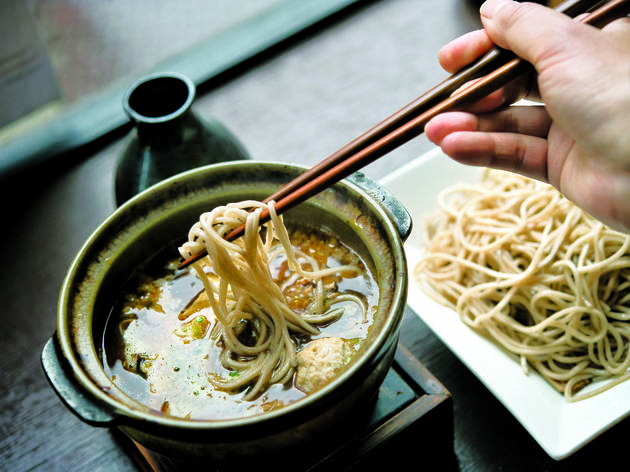 We told you about the hottest Italian blockbusters, nouveau Asian spots and regional American gems opening in NYC this fall. Here are 28 more restaurants that will make their debut before winter.

Barraca
Graze on paella and sip sangria tapped from custom barrels at this Spanish venture from Hector Sanz (Rayuela, Maconda), named after a famous 1930s Spanish traveling theater company. The theme is evoked inside with design details like dangling ropes and a pulley hanging from the ceiling. 81 Greenwich Ave between Bank and W 11th Sts (no phone yet). Late August.

Cocoron
If you’re having a tough time snagging one of the coveted 14 seats at downtown noodle spot Cocoron, you’re in luck—it’s expanding with a new location a few blocks west, where you can also slurp down its wholesome buckwheat soba noodles. 37 Kenmare St between Elizabeth and Mott Sts (212-966-0800, cocoron-soba.com). Late August.

Porsena Extra Bar
A 17-seat wine bar from chef Sara Jenkins sprouts up right next door to her East Village pasta destination, Porsena. The focus here is more broadly Mediterranean, with small bites (also available at lunch) like raw sheep’s-milk cheese from Abruzzo, Italy, served with a rhubarb relish; or chickpea crackers loaded with tuna carpaccio puttanesca, fried capers and a spicy tomato sauce. Sip a glass of Italian, Spanish or Lebanese wine at the bar, whose rough tiles recall the cobblestone streets of Europe, where Jenkins went hunting for culinary inspiration. 21 E 7th St between Second and Third Aves (no phone yet). Late August.

Ramen Yebisu
New York City’s ramen craze has made anthropologists out of some local chefs, who continue to discover and re-create countless obscure variations on the Japanese noodle dish. The latest culinary artifact: abura soba, or “oil noodles,” a ramen served without soup and topped with an unctuous soy-based sauce. The dish is a house speciality at Ramen Yebisu, where it is tossed with roasted pork, scallions and soy sauce. You can also sample the namesake yebisu ramen (named for the Japanese god of fishing), which features a light seafood broth floating chunks of lobster and prawn. 126 North 6th St between Bedford Ave and Berry St, Williamsburg, Brooklyn (718-782-1444, ramenyebisu.com). Late August.

Ainsworth Park
This 7,000-square-foot happy-hour mecca (the second location in NYC) caters to the baseball-cap-and-blazer crowd with more than 60 televisions concealed as antique framed mirrors when not playing the big game, a bar serving vodka cocktails and Bud on tap, and frat-dream dishes like filet mignon wrapped with applewood-smoked bacon. 111 E 18th St between Park Ave South and Irving Pl (no phone yet). Early September.

Casa Pomona
An 18-foot–long mural depicting Pomona, the Roman goddess of fruitful abundance, is the eye-catching centerpiece of this UWS tapas spot, and the inspiration for the restaurant’s name. Pair modern Spanish dishes like albondigas stuffed with oxtail, striped bass seared in a cast-iron skillet and a crispy suckling pig with pickled watermelon rind with one of the red or white sangrias on tap. Grab a seat at the communal cherry-wood tables in the front of the room, or opt for a more traditional dining space in the back, where the walls are decorated with antique glass sconces from the 1964 World’s Fair. 507 Columbus Ave between 84th and 85th Sts (212-362-3200). Early September.

The Flatiron Room
From nightlife maven Tommy Tardie and cocktail wizard Miguel Aranda (Bar Masa, Apotheke) comes a whiskey-focused bar offering more than 400 varieties of the brown stuff and small plates like cured meats, oysters, and ceviche, served on wooden boards. One-hundred-year-old reclaimed floorboards creak beneath your feet, while the walls are plastered with vintage wallpaper imported from Italy. 37 W 26th St between Broadway and Sixth Ave (no phone yet). Early September.

Papadam
A local favorite on the UES, Indian joint Papadam reopens following a brief restoration. The new menu dresses healthy proteins and salads in traditional Eastern flavors: Look out for lamb chops, twice marinated in a mixture of cumin powder and coriander, cooked in a tandoor, and served alongside mint rice, as well as standards like chicken tikka masala and the classic spinach-and-cottage-cheese dish palak paneer. Crystal chandeliers and a mahogany color scheme make the place feel like a handsome living room. 1448 First Ave between 75th and 76th Sts (212-879-6000). Early September.

The Pod Rooftop Lounge
This rooftop bar, 17 stories above ground, offers a view of the East River and craft cocktails from bar manager Sam Anderson (Hotel Delmano, Freemans). Sip the Weathervane, a mixture of rye whiskey, rosemary, ginger, Campari and lemon juice, while gazing at the vista. 145 E 39th St between Lexington and Third Aves (no phone yet). Early September.

Enoteca Isola
Isola Trattoria & Crudo Bar in the Mondrian Soho expands with a 45-seat wine bar next door, featuring fresh crudo, charcuterie, and cheeses from Sicily native and chef Victor LaPlaca, as well as wines from the coast of Italy and the South of France. 9 Crosby St between Grand and Howard Sts (212-389-0000). Mid-September.

Schapiro’s
This Lower East Side restaurant—named after a kosher wine store once situated on Essex and Rivington Streets—will serve New American fare with a Jewish twist. 120 Rivington St between Essex and Norfolk Sts (no phone yet). Mid-September.

Todd’s Mill
Restaurateur Matt Suchomski—who recently parted with No. 7 and No. 7 Sub—takes a personal turn with this 75-seat New American bistro, named after a town that his mother’s family founded in Illinois. Styled to evoke an upscale living room, the spot features antique mantlepieces, plush circular banquettes, a brass chandelier and a framed photo of Suchomski’s mum. 162 Orchard St between Rivington and Stanton Sts (no phone yet). Mid-September.

Hair of the Dog
Bar owner Michael Asch’s rap sheet is chock-full of pubs with punny names like Stumble Inn, Off the Wagon and 13th Step. Like those ventures, his latest addition, Hair of the Dog, is an upscale man-cave designed to lure bros and their adoring consorts. Lit by glowing globes, the venue features two bar counters—the first made from a 19th-century wooden roof, the other from the shutters of an old brownstone—where you can dig into burgers stuffed with jalapeños and cheese, or pulled-pork sliders. The draft menu is composed of old standbys like Coors and Bud, but count on Jameson shots as the crowd favorite here. 168 Orchard St at Stanton St (212-477-7771, nycbestbars.com). Late September.

Salumè
Munch on panini at this new outpost of the popular Milanese sandwich shop, which will also offer a tasting menu a few nights a week, a lengthy Italian wine list and house-made vermouths. 202A Mott St between Elizabeth and Mulberry Sts (no phone yet). Early October.

Arlington Club
Chef Laurent Tourondel (BLT Steak) will team up with the TAO Group for this bi-level Upper East Side steakhouse. Expect plenty of mook bait, including a full sushi menu and a design from the team behind Lavo. 1032 Lexington Ave between 73rd and 74th Sts (no phone yet). Mid-October.

Hudson Common
Try one of the dozens of draft brews with a sandwich—like the Pork Katsu BLT, a crispy pork cutlet slathered with katsu mayonnaise and topped with apple bacon and pancetta—at this gastropub inside the glam Hudson Hotel. 356 W 58th St between Eighth and Ninth Aves (no phone yet). Mid-October.

Max
The East Village trattoria—a cheap-eats standby since 2000—will transport its popular Italian classics (spaghetti and meatballs, lasagna) to the ’Burg when it opens its first Brooklyn outpost this fall. 740 Driggs Ave at South 2nd St, Williamsburg, Brooklyn (no phone yet). Late October

Roy
Dig into Mediterranean dishes, composed of spit-roasted meats and produce harvested at local farms, at this brick-walled rotisserie. The only thing separating the dining room from the kitchen is a rough-hewn black-walnut table, which the chefs use as their pass. 481 Court St between Huntington and Nelson Sts, Carroll Gardens, Brooklyn (no phone yet). Early November.

Willow Rd
At this Meatpacking District bistro planked with distressed, recycled lumber, Le Bernardin’s former sous chef Colby Wood serves seasonal American dishes, like fluke francese with artichokes and walnuts, and a mac and cheese made with black-pepper cavatelli and aged Gouda and topped with bread crumbs. 85 10th Ave between 15th and 16th Sts (no phone yet). Late November.