New York City Restaurant Week is among the five boroughs’ best food holidays. Traditionally, New Yorkers (and a few lucky tourists) clear their dining schedules and make reservations at the city’s best special occasion spots, newcomers, and all-time favorite restaurants for deals unseen the rest of the year. Hundreds of destinations participate citywide, and we predict that this year will be Restaurant Week’s best round yet.

What is Restaurant Week in NYC?

New York City Restaurant Week actually comes twice a year, in summer and in winter, and each edition lasts for about a month. After necessary adaptations in 2020, it’s back in its intended form, where hundreds of restaurants curate their menus and produce prix-fixe selections for brunch, lunch, dinner and sometimes all three. Restaurants will offer a combination of indoor, outdoor, takeout and delivery service.

This year’s deals are a little different: Price points are $21, $39 and $125. Those tiers are new to this year, and the top option is expected to include three (or more) courses, supplements that typically cost extra (like uni, caviar and truffles), or special “perks,” per Restaurant Week’s official site.

When is Restaurant Week in NYC?

Reservations open for Summer Restaurant Week on July 12. Tables are available from July 19 through August 22. 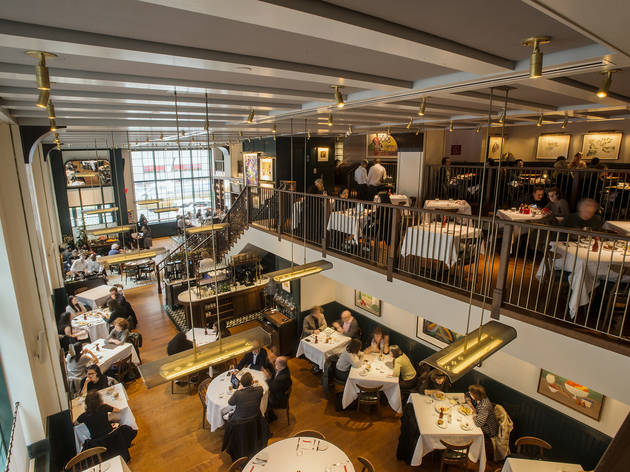 New York City Restaurant Week, which opened its reservations today, has been a twice annual dining tradition since 1992. When it first got cooking, the culinary holiday was celebrated with $19.92 lunch specials at restaurants like Tribeca Grill. Surprisingly, those midday meals only rose to $26 by 2020. What's even wilder? This year’s prices have actually fallen. Sort of.  Summer 2021’s NYC Restaurant Week, which runs from July 19 through August 22, has three pricing tiers: $21, $39 and $125 for lunch or dinner. RW organizers advise restaurants to offer at least an entree and a side for the first two tiers, and the $125 ticket must include three or more courses plus a little something extra like wine.  The stunning number of participating Italian, Thai, Russian, Cuban, Spanish, French, Mexican, Indian, Brazilian and Japanese izakayas, ice cream parlors, steakhouses, fish bars, brasseries, bistros, grills, cafes and sushi restaurants decide which deals to offer when. And you decide how many of these marvelous options you can cram into four-and-a-half wonderful weeks. It’s a lot!  We’ve narrowed the field to the very best Restaurant Week destinations where you’ll get great food, have a good time, and might even want to book again. We’ll be expanding on these first-round picks with menu recommendations in the coming weeks. And, whichever tier you choose, remember that drinks, tax and tip are not included.  Gramercy Tavern Depending on your mood, Gramercy tavern can feel power lunch-adjacent, Old New York-y, romantic or exclusive. It isn’t just a special occasion space reflecting your own occasion, it’s a special place, with history and personality and excellent food and drinks. We’re partial to the five-course tasting menu (which presently includes poached lobster and roasted duck and clocks in at $148) when we’re looking to make a night of it and Restaurant Week is the perfect time to get in for less cash.  Hearth An East Village favorite since 2003, Hearth looks and feels like a restaurant in a film about NYC where nobody’s problems are that big of a deal but there are still a lot of long tracking shots set to moody music. It even retained its following after a slight concept redirect (no trans fats, hormones or antibiotics) a few years ago, which isn’t always a given. Farm to table hits like beef and ricotta meatballs, roasted spatchcock chicken and pistachio cake with cherry compote still delight.   Izakaya Juraku Add any one of Izakaya Jukaru’s 50 Japanese craft beers to your prix-fixe and we bet you’ll want to order a half-a-hundred more. Each one is eight to ten bucks, so this is a terrific option for getting tipsy without quadrupling your onigiri, ramen and karaage tab. Mikey Likes it Ice Cream Ice cream? For summer? Groundbreaking! We don’t remember ever seeing an ice cream shop on any previous Restaurant Week roster and we’re terrifically excited for this new development! Mikey’s everyday flavors include strawberry cheesecake, mint fudge brownie and vegan blueberry hibiscus.   Nobu Downtown Everybody knows Nobu, and even the most well-connected among us can’t pass up an opportunity to mention having recently been in all casual-like. It is also owned by Robert De Niro because in this town, if you can dream it, you can be it, baby! Very-known Nobu is particularly noteworthy for its Japanese/Peruvian menus. This season’s Restaurant Week offering is $39 for two courses like yellowtail sashimi and black cod with eggplant miso from 11:45am-2:15pm on weekdays.  The Russian Tea Room Classic, dramatic and expansive but undesirably located in Midtown, when else are you going to visit The Russian Tea Room, where the caviar and Champagne pairings start at $275? After a show at Carnegie Hall?! Good idea! Do that, and do it now when you can get a taste of the Tea Room’s blini, blinchik and stroganoff for a song.  Spanish Diner Mercado Little Spain is the best part of the Hudson Yards Retail complex and Spanish Diner is a special piece of its pie right by the High Line. Its main menu includes bocatas and huevos five ways, four kinds of croquetas, a refreshing gazpacho and macarrones con chorizo. You’ll catch us there during sangria hour when glasses are $5 and $6.   Tamarind Tribeca High ceilings and a glossy marbly bar make the downtown outpost of the Michelin starred Flatiron original feel like a breezy breath of fresh air. Its robust daily dinner menu includes a delicious chicken tikka masala, lamb vindaloo, saag paneer and a special seafood plate with lobster, shrimp, scallops, sea bass and seasonal fish. Union Square Cafe We’ve always associated Union Square Café with people who drink white wine out of giant glasses on like a Tuesday afternoon and perpetually appear to have just gotten their dry cleaning and sometimes it’s nice to feel that way, too! Skip work and swing by for dishes that could include hamachi crudo, burrata, several types of pasta or poached halibut.   Wayan One of the best restaurants of the year when it first opened in 2019, Wayan is highly designed with ornate details inside and out with Indonesian-French menu items to match. We’ve previously enjoyed its lobster noodles, dry-aged crescent duck and crab fried rice. 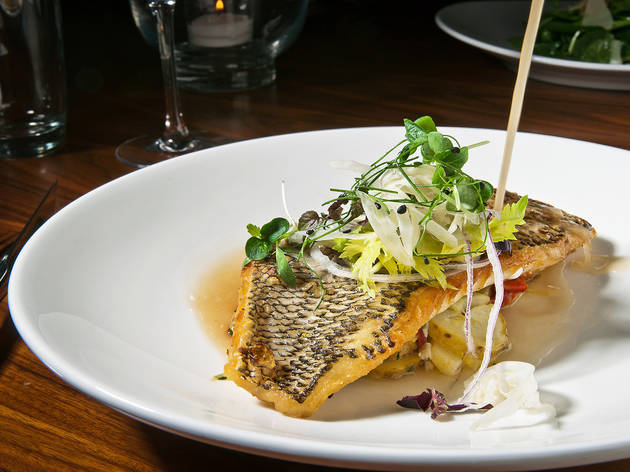 NYC Restaurant Week has been presented as a kind of budget prix-fixe since its inception in 1992, when the fledgling promo was $19.92 for lunch at some of the city’s favorite restaurants over the course of four days.  Almost three decades later, twenty bucks for lunch still doesn’t exactly sound cheap, but then, like now, the price tag was relatively more affordable than what one could typically expect from participating restaurants like early adopter Tribeca Grill. By NYC Restaurant Week, Winter 2020, two-course lunches and three-course dinners were $26 and $42, respectively, before drinks, tax and tip.  This year, the prices have gone down and up. Restaurants can now offer meal options for $21, $39 or $125 from July 19 through August 15. That top tier is Restaurant Week’s “Signature Dining Experience,” which must include at least three courses, ideally with “exclusive enhancements” or “perks,” according to the official event site. Reservations do not become available until July 12, and until this season’s restaurants, and their menus, are released, it won’t be clear precisely what accounts for the extra cash in every case.  An NYC Hospitality Alliance post attributed to Restaurant Week organizer NYC & Company does have a bit more detail, however. “We encourage exciting add-ons such as beverage pairings, merchandise (e.g., cookbook, restaurant-branded food items), chef visit to table, chef’s table, off-menu items, etc,” the post reads.  Like most seasons, some restaurants have already posted their Restaurant Week menus in advance of the official reveal. Philippe by Phillipe Chow’s $125 Signature Dining Experience, for example, will include three courses like green prawns, roasted Peking duck and sorbet, plus two bottles of house wine for parties of six or more. STK Steakhouse’s pairs wine with its jumbo lump crab cake, roasted rack of lamb and chocolate cake. And Lure Fishbar appears to be offering an amuse of tuna tartare, followed by Maine lobster carpaccio, crab salad, seafood fra diavolo and Meyer lemon panna cotta.  A full list of our favorite NYC Restaurant Week, Summer 2021 restaurants and their menus will be available here in the coming days. 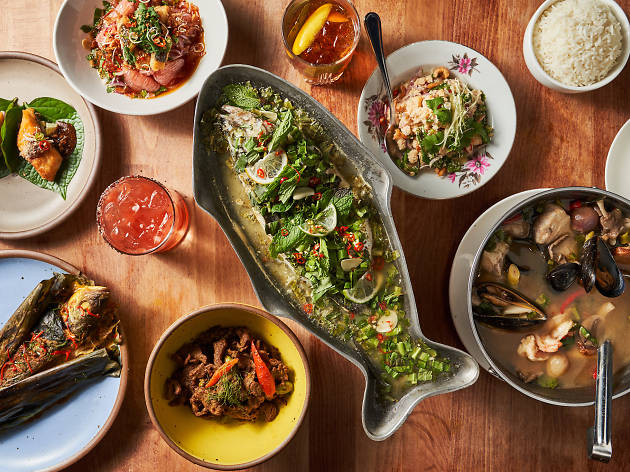 Restaurant Week is back for winter 2020 with Fish Cheeks, Riverpark and more 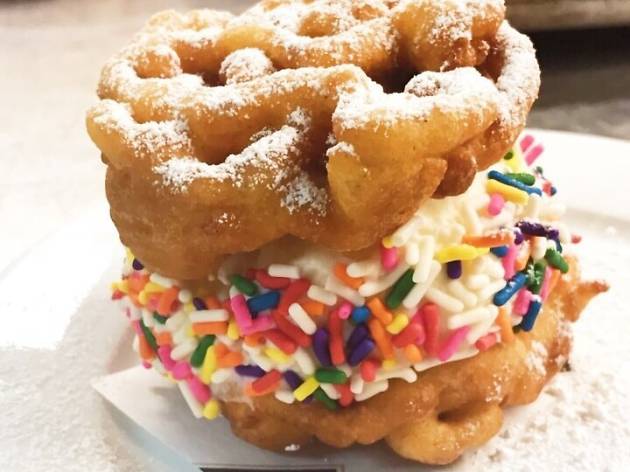 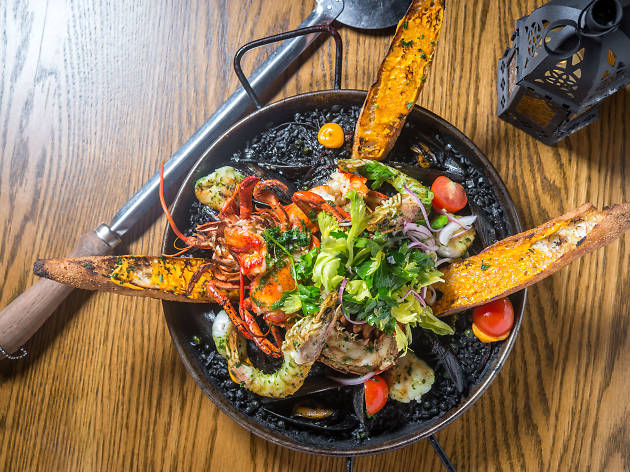 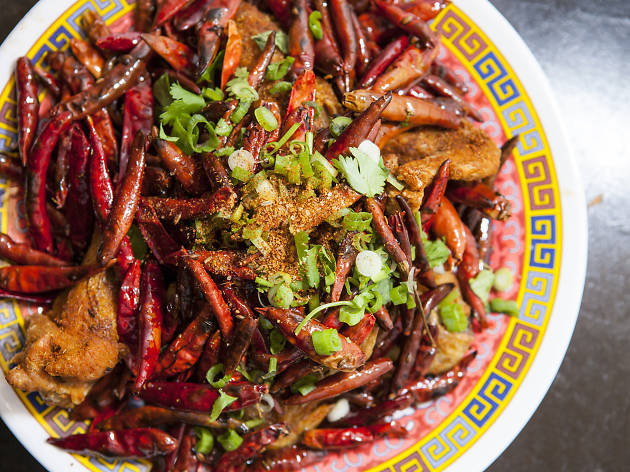