Put your knowledge of Little Italy to the test, and see if you know these neighborhood secrets

The once-Italian enclave stretched from Canal to Houston Streets, between Lafayette Street and the Bowery, as immigrants from Naples and Sicily flooded the area in the 1880s. Now, it's mostly on the blocks surrounding Mulberry Street, where some of the trendiest clothing stores and the best bars in NYC are located, but what's left is still going strong.

Below, we're spilling six Little Italy secrets so you can examine some lesser-known aspects of this historic and thriving Brooklyn enclave. 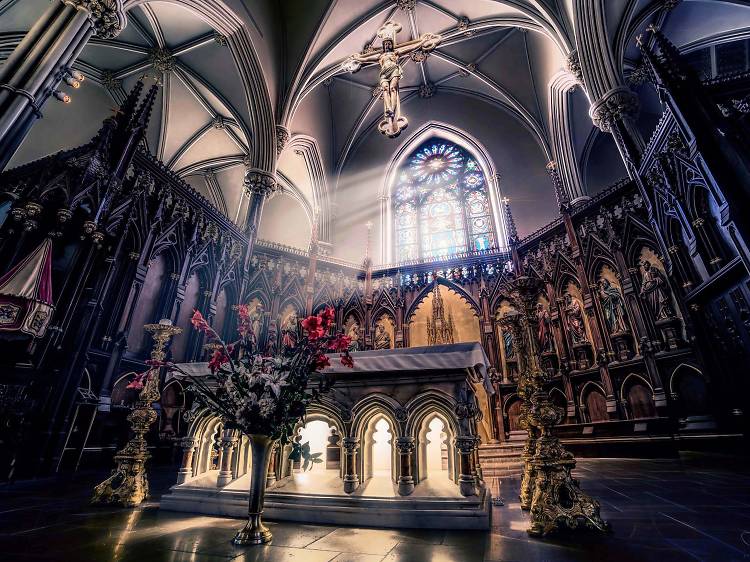 Built between 1809 and 1815, Saint Patrick’s Old Cathedral was the seat of the Roman Catholic Archdiocese of New York until the current Saint Patrick's Cathedral opened in 1879.

When it was built, it was the largest in the city and still has the original 1868 pipe organ that was originally operated without any electricity. In 2004, the Organ Historical Society designated it as an instrument of "exceptional historical merit, worthy of preservation," which is the organ equivalent of national landmark status. It's still in use today.

It was declared a minor basilica by Pope Benedict XVI on Saint Patrick's Day, March 17, 2010. 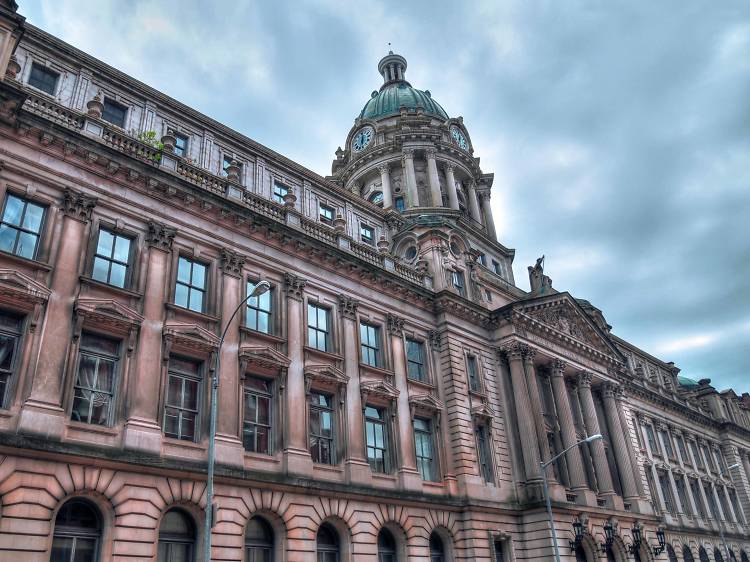 It's where the Old Police Headquarters were located

240 Centre Street, a huge Beaux Arts-style building that now houses condos, used to be the New York City Police headquarters from 1909 to 1973.

The building, when it was used as the NYPD's HQ, included a gymnasium, a circular radio room, and two basement levels, one with more than 30 6-by-10-foot steel mesh cells with snap-up bunks attached to the walls, according to The New York Times.

There's also rumors of a secret tunnel that used to run underground to a tavern, which now Onieal's Grand Street Restaurant, but there's no physical evidence left.

Condos inside the building go for as much as $18 million nowadays. 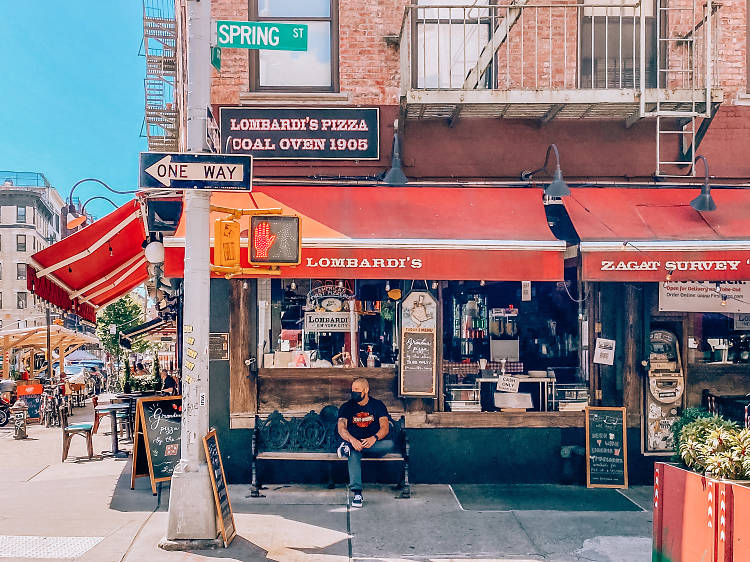 Lombardi's was the first pizzeria

Lombardi's is said to be the very first pizzeria in the U.S. and still boasts one of the best pies in NYC.

Gennario Lombardi opened his grocery shop in 1905 and used techniques from Naples to create tomato pies that he wrapped in paper and tied up with a string. Workers would eat them for lunch at their factories.

It still offers the same beautiful, smoky-crusted coal oven-baked pizza to this day. 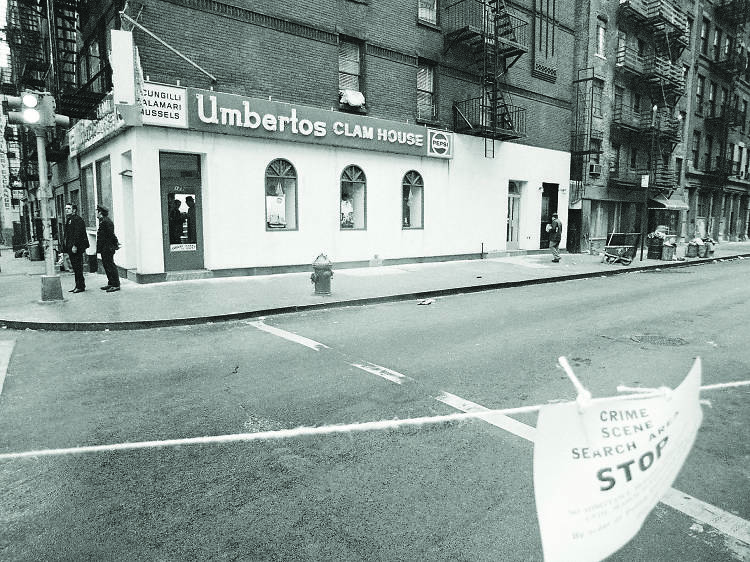 It's dark mafia history can still be found

Organized crime in Little Italy was a reality in the 20th century with several big operators who used the neighborhood as their headquarters, including John Gotti, Ignazio "The Wolf" Lupo, Peter DeFeo and Matty the Horse Ianniello, among others.

A lot of the bars and restaurants where these crime bosses hung out are no longer around, but Umberto's Clam House is. Some dark tourists seek it out since it was the scene of one of the most infamous Mafia murders in NYC. Here, Joe Gallo was shot five times in the back of the restaurant and stumbled out to the street, where he died.

While there's nothing glamorous about its gritty history, Little Italy is the setting of the Corleone crime family The Godfather, the 1973 Martin Scorsese film Mean Streets, and the 1994 Luc Besson film Léon, The Professional. 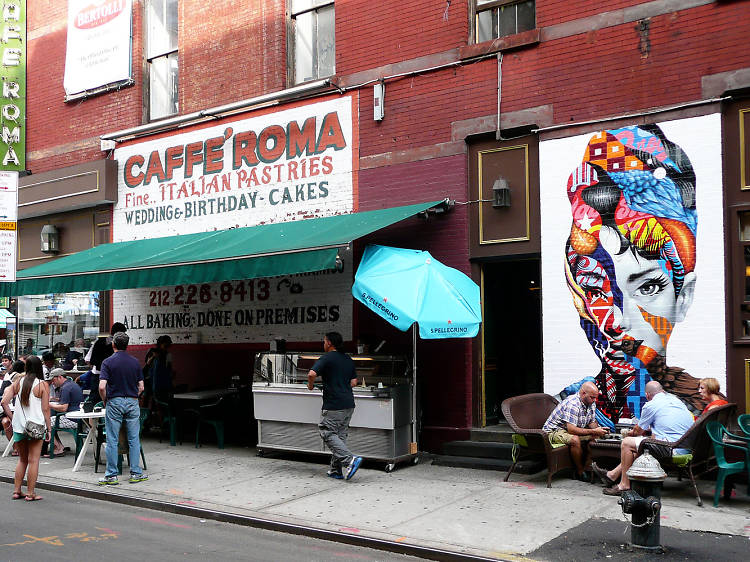 Little Italy Street Art Project brings a diverse group of artists together to create incredibly vivid murals across the neighborhood (and the city). Spending some time around the neighborhood, especially on Mulberry Street, you'll spot a mosaic-like portrait of Audrey Hepburn among other eye-popping creations.

The best of Little Italy, NYC 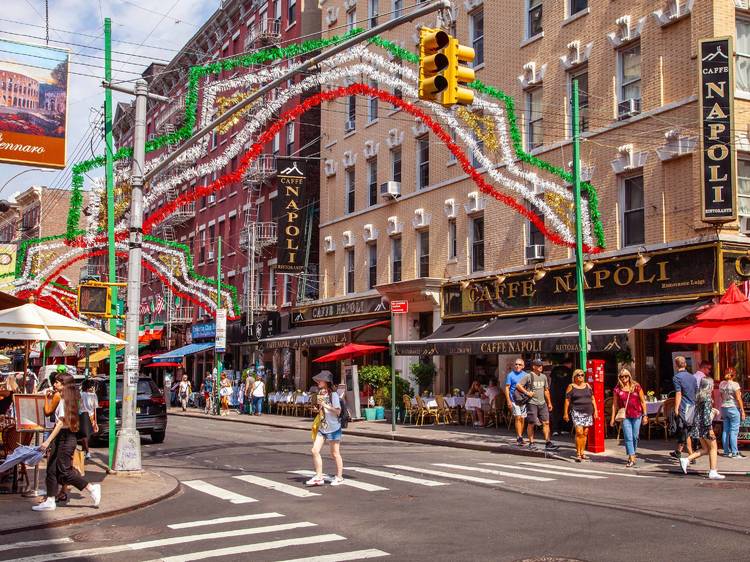 You can live in New York for years and still not know everything about its vibrant neighborhoods. 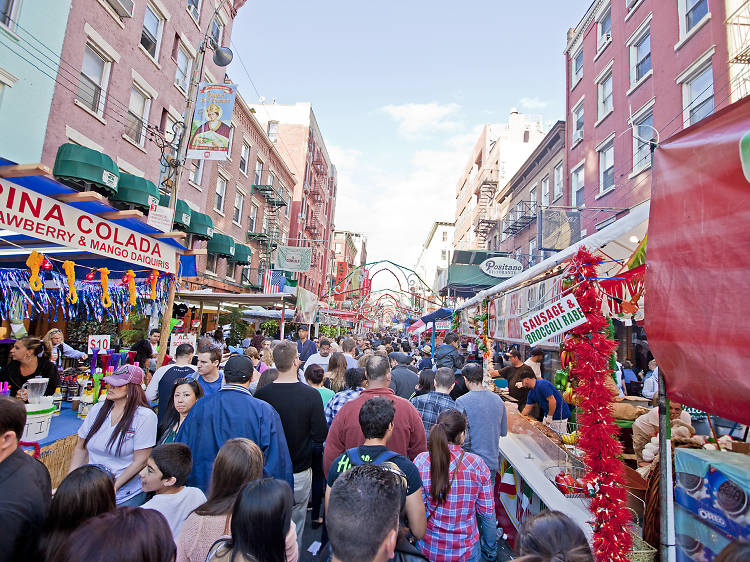 Touristy spots in Little Italy that are actually good 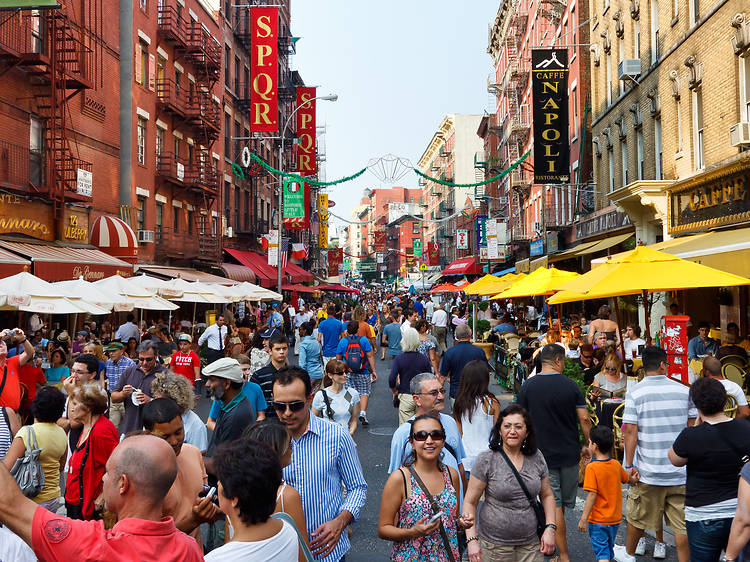 The best things to do in Nolita and Little Italy 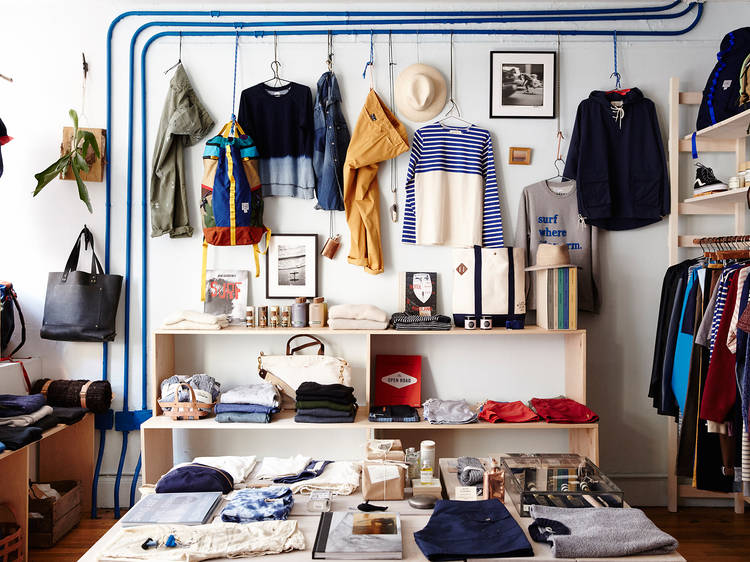 The best shops in Little Italy and Nolita

Consult our list and head straight for these downtown stores, including jewelry and shoe stores and standout boutiques 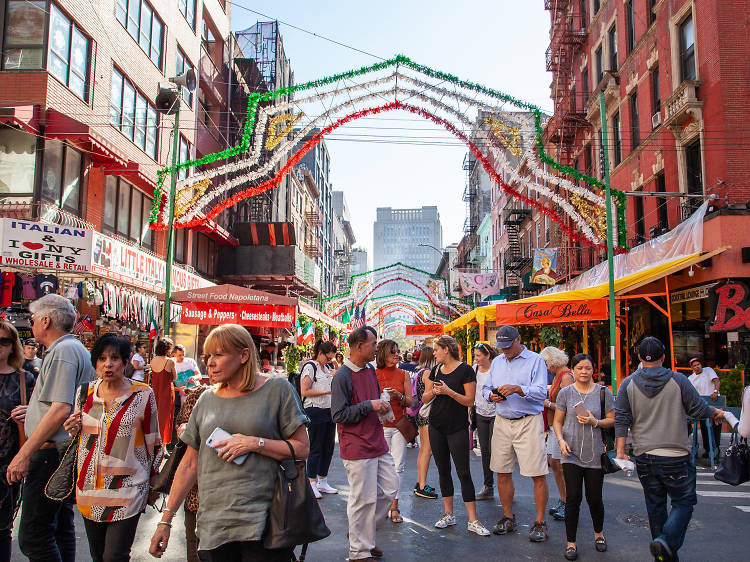 The Feast of San Gennaro 2021 guide

Out-of-towners and locals get psyched for the annual Feast of San Gennaro, and for good reason: the event includes the best spots in Little Italy. Eat at some of the best Italian restaurants in the city, watch colorful parades, catch free concerts and of course, see the world-famous cannoli eating competition.

RECOMMENDED: Full guide to the best NYC events in September

What is the Feast of San Gennaro?

Although the Feast of San Gennaro is a celebration of faith (folks tip their hats to the Patron Saint of Naples, Italy) the festive atmosphere, delicious food and colorful processions are what it’s known for. For 11 days, Little Italy is transformed into a red, white and green bash with special guests, live music and a cannoli eating contest.

When is the Feast of San Gennaro?

The Feast of San Gennaro 2020 is canceled. The feast usually runs for 11 days in September.

But instead, while the official San Gennaro feast is canceled along with all festivals and fairs in New York, Gelso & Grand is throwing a San Gennaro-inspired feast in Little Italy this year. The pop-up roster is stacked with some of NYC’s favorite Italian restaurants, including Don Angie’s lasagna, Di Fara’s pizza slices, Regina Grocery’s arancini, Belle’s Cafe’s rainbow cookies and Morgenstern's spumoni ice cream.

Where is the Feast of San Gennaro?

The Feast of San Gennaro is located along Mulberry Street between Canal and Houston Streets. The festival stage is located on the corner of Grand and Motts Sts and features live entertainment starting at 7:30pm each night.

What is the cannoli-eating contest?

Brave contestants square off with mountains of cannolis from Ferrara Bakery.

In depth on the Feast of San Gennaro:

Every September since 1926, in honor of the patron saint of Naples, the air in Little Italy becomes thick with the scents of smoky sausage-and-pepper sandos and fried dough. More than a million people come to stroll the strip of vendors, enjoying Italia in the form of crispy cannoli and zeppole. After almost a century of practice, the feast’s merrymakers know how to party with food in hand.

You can’t have a festival without a parade—and the Grand Procession is one heck of a parade. Grand Marshal Steve Schirripa (The Sopranos, Blue Bloods) will lead the festivities, which feature marching bands, floats, revelers and, most significantly, the statue of San Gennaro.

As Little Italy has grown littler and less Italy-er, many Italian-American families have moved away from the neighborhood, but they still consider this fest a homecoming: You can always expect a massive showing of dedicated Staten Islanders returning to Manhattan to enjoy the provisions and work the stands with élan.

The most important question is also tricky to answer: Which vendor deserves the first bite? Lucy’s Palace, one of the most popular stalls, crafts worth-the-wait sausage-and-pepper sandwiches. Serving cheesy and meat-filled Italian egg rolls, Roll Up is not afraid of deep-frying its delights until super crispy. Alleva Dairy, the oldest cheese shop in the U.S., will provide eggplant, chicken and meatball parms for you to get your teeth around. Plus, swing by the cannoli king Caffé Palermo, which dishes out fried pastries and a unique almond-spun cheesecake cone.

Once you’re stuffed, why not marvel at some real pros as they shovel mountains of food down their throats? Swing by the inaugural Zeppole Eating Competition, sponsored by Danny on the Corner, as well as the fifth annual Meatball Eating Competition and the 22nd annual Cannoli Eating Competition, which takes place at Ferrara Bakery. If you fancy yourself a cannoli aficionado and still have room for a lot of dessert, that contest is open to the public. 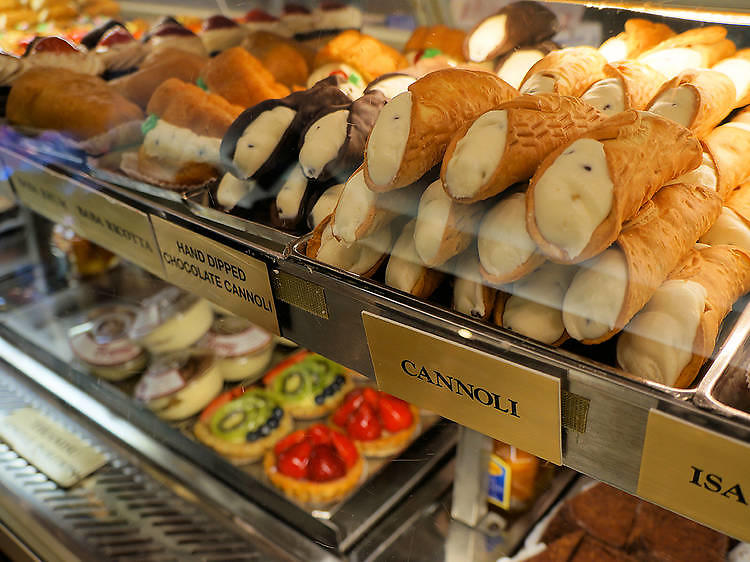 The best restaurants to celebrate The Feast of San Gennaro

At Little Italy's annual Feast of San Gennaro, take a bite of the world's biggest cannoli and eat some really great pasta