It's a busy week with a plethora of activities for the taking. You're gonna need this list of the best free things to do in NYC if you are to have any hope of avoiding serious FOMO. First and foremost, don't miss out on the exhibit of large artworks at the Socrates Sculpture Park or take the ferry to Governors Island for some respite. Also, don't miss a free comedy show being hosted in Google Docs!

RECOMMENDED: Find out more free things to do in NYC

Free things to do in NYC this week 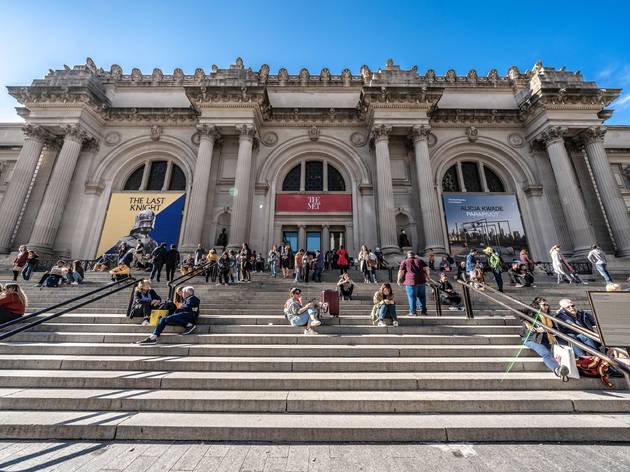 To celebrate the return of visitors on August 29, the Metropolitan Museum of Art has added new banners to its facade designed by none other than Yoko Ono.

Ono's piece, titled DREAM TOGETHER (2020), were created in response to the pandemic and consists of simple white 24-by-26-foot banners with the words "Dream" and "Together" in black. They flank the museum's main entrance with one on each side of the doors, joining Wangechi Mutu's installation of four bronze sculptures, The NewOnes, will free Us (2019), which sit in the niches of the exterior of the building.

Ono's banners are reminiscent of her other works like her IMAGINE PEACE campaign with John Lennon in that they simply convey an encouraging and peaceful message through bold words in black and white. 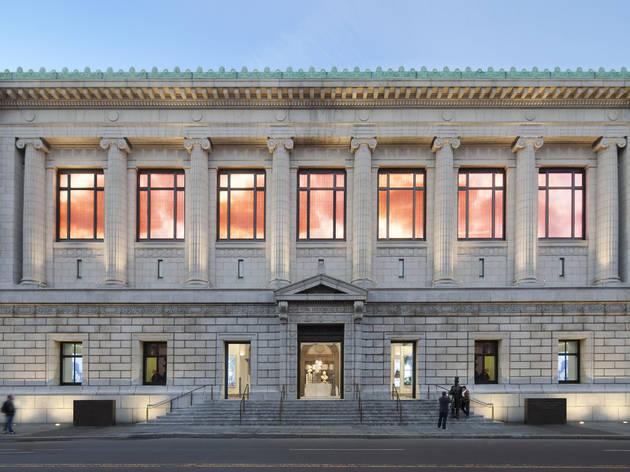 "Hope Wanted: New York City Under Quarantine" is installed in the museum’s rear courtyard, located at West 76th Street between Central Park West and Columbus Avenue, and as the title indicates, it takes a look back at NYC's (very) recent, traumatic past—which, as William Faulkner might have put it, isn't even past. But treating the present as history is a specialty for the NYHS, which put out a call to New Yorkers for personal artifacts related to the lockdown as early as April (it did something similar immediately after 9-11).

"Hope Wanted" is a joint project between writer and human-rights activist Kevin Powell and photographer Kay Hickman. At the height of the quarantine, they spent two days traveling the five boroughs to interview and take photos of ordinary New Yorkers living during an extraordinary moment. Some 50 images are being featured, along with audio recordings accessible by smartphone. 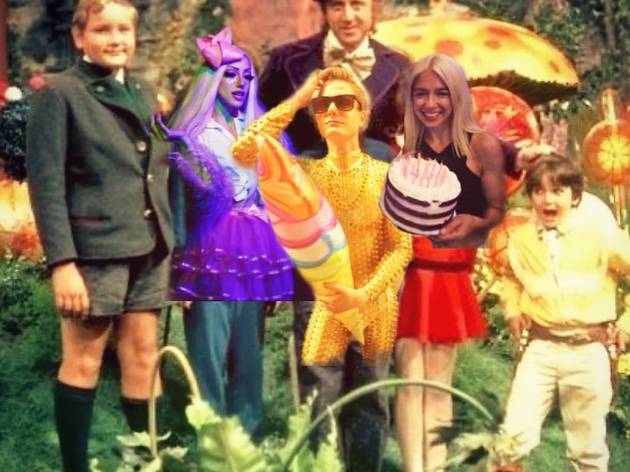 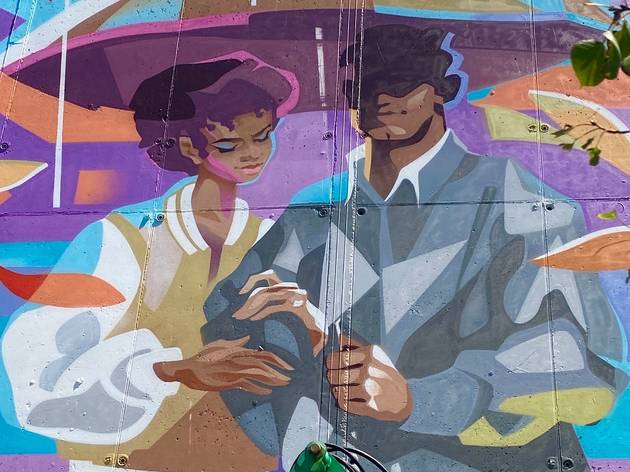 A new 5,000-square-foot outdoor art installation at Hudson Yards by Muros features designs by notable muralist Key Detail and street artist Elle that relate to the site’s past, present and future. The original works can be found on walls along 11th Avenue and celebrate themes like togetherness and inclusion. 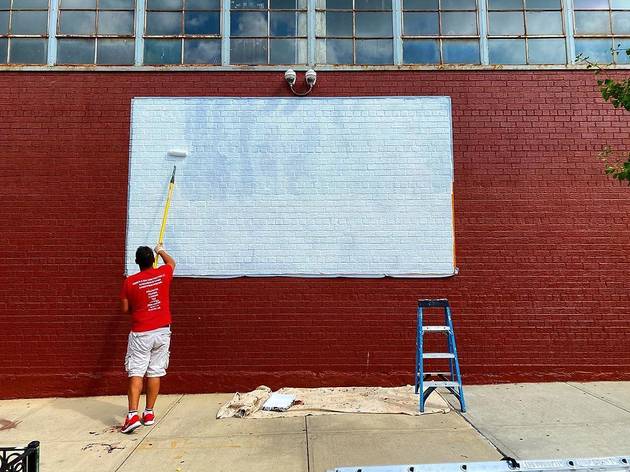 Bushwick's Syndicated, known for being a one-stop shop for great food and films, is finally screening movies again—outside.

The Brooklyn hangout has been doing outdoor dining since restaurants were allowed to reopen, but it has been teasing outdoor screenings for a couple of weeks now. 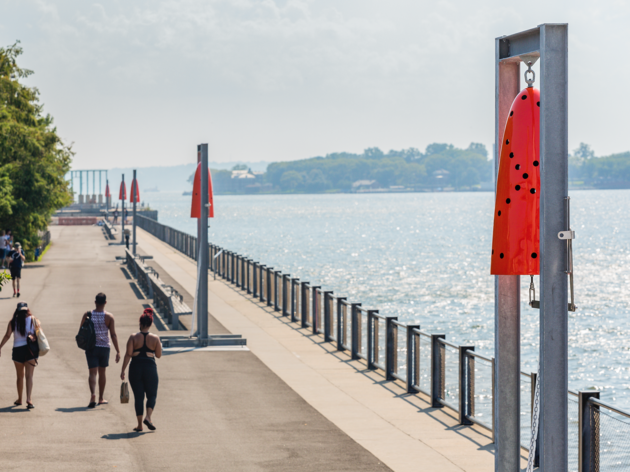 Brooklyn Bridge Park has a new art installation by Davina Semo. The work, called "Reverberation" is comprised of five cast bronze bells, which can be rung by visitors in the park, and are meant to recal the maritime communication once common at this waterfront site. The traditional bell form in this work has been changed to an elongated, streamlined sculpture that dangles aloft from a heavy industrial galvanized steel frame. The holes she has drilled through each bell create constellations of light in their darkened interiors and staccato patterns on their exterior shells. Each bell has its own name and sound—Reflector, Singer, Dreamer, Listener, and Mother. They'll be up August 20, 2020 through April 18, 2021. 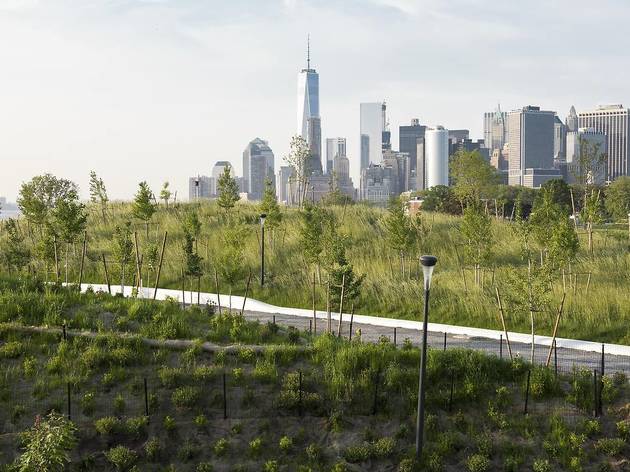 New Yorkers can once again take one of the best day trips that doesn't require leaving the city. After months of extended closure, the 172-acre island returned in July with limited capacity for passive recreational activities. Cooped-up New Yorkers can look forward to hiking, running, biking, picnicking and birding throughout the sprawling green space.

Masks will be required while onboard the Governors Island Ferry, both above and below deck. Visitors must reserve ferry tickets in advance through a reservation system, and only a limited number of tickets will be available for purchase in person for each time slot. To increase access to the island from communities with less available green space, Brooklyn ferries to Governors Island will now depart from Atlantic Basin/Red Hook (instead of Brooklyn Bridge Park’s Pier 6). 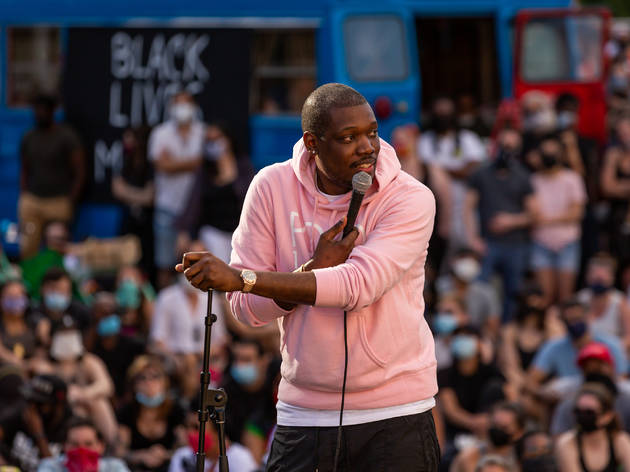 Michael Che has been taking his comedy outdoors for the past few weeks in front of a socially-distanced audience in Long Island City. According to Queens Post, the Saturday Night Live Weekend Update comedian is hosting shows on a weekly basis outside Plaxall Gallery and drawing quite a crowd.

The show, which has limited space, has a different lineup every week and in the past has included Meïa Santiago, Chipha Sounds, Matt Richards and "Big" Jay Oakerson, according to the Queens Post and Culture Lab LIC's Instagram. Culture Lab LIC, which runs the gallery's warehouse space at 5-25 46th Avenue, works with Che, and restaurant The Creek and The Cave to put on the show each week around 5:30-6pm. Che usually goes on around 7:45pm and will pull special guests into the back of a truck bed to talk about current events, the Queens Post says. There's no set day each week, but the shows are announced on Culture Lab's social media when they are set. 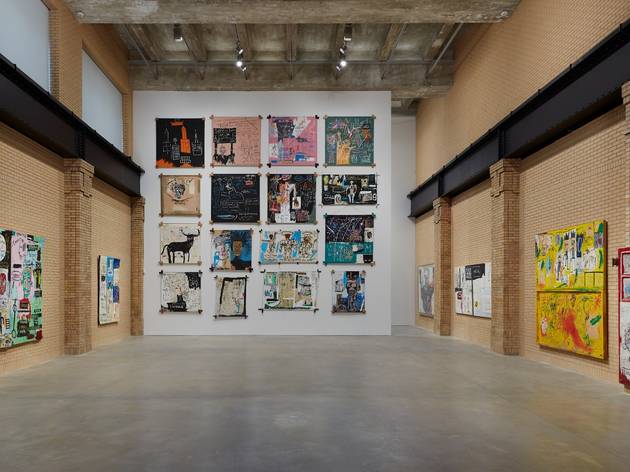 To see any Jean-Michel Basquiat artworks, it usually requires going to a museum, but one arts organization is bringing the iconic artist's work to your home. Last week, The Brant Foundation put its major 2019 Basquiat exhibition online as an immersive virtual tour. Without leaving your couch, you can "walk" through all four floors of the show and see some of the artist's most influential works. "It was an honor to be able to bring together so many of Jean-Michel Basquiat’s works for our exhibition in 2019," the foundation said in a statement provided to Time Out. "This virtual tour is an extension of the exhibition, making the artist’s impactful works accessible for an even wider audience to explore. We hope that launching this initiative will help further dialogue around Basquiat’s lasting impact, his inspirations, and the social and political commentary embedded in his works."   Photograph: Courtesy Tom Powel Imaging (Copyright Estate of Jean-Michel Basquiat. Licensed by Artestar New York). The Brant Foundation.   The exhibition, which originally opened the foundation's East Village space in March 2019, showcased about 70 of his eye-catching works, bringing it back to the same neighborhood that inspired him. Basquiat created more than 1,000 paintings and more than 2,000 drawings in less than a decade (during the 1980s) and made the streets of Lower Manhattan his studio, the foundation says. "Basquiat’s complex oeuvre has established him as one of the most important inno 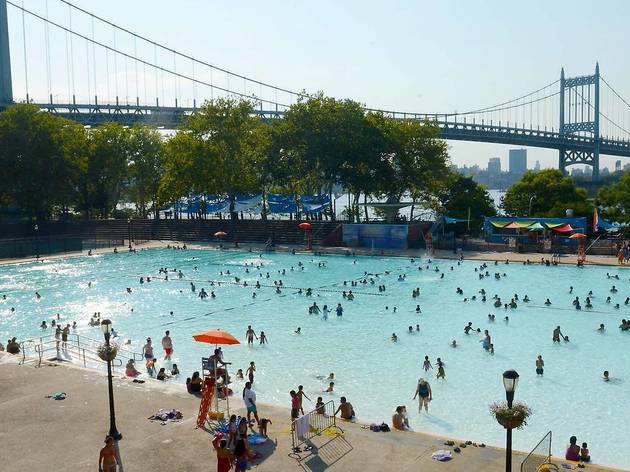 New York is already rising to steamy temperatures in the high 80s and low 90s—but luckily, NYC pools are opening up in a few weeks for New Yorkers to cool off with a swim. Mayor Bill de Blasio officially announced that 15 NYC public pools will reopen across the five boroughs by August 1. While the mayor said the city is not opening all of the city’s 56 pools, he said he and the City Council agreed to restore $9.9 million to the Parks Department budget to hire 716 lifeguards, pool staff and to fund sprinklers and water fountains. De Blasio says they tried to pick pools that "would have the maximum benefit for the people hit hardest," including the largest ones and those in communities farthest away from the beach. The pools opened include...