This city is brimming with amazing watering holes—from the coziest of cocktail lounges to the grimmiest of dives—but sometimes choosing where to go can be tough. Enter the first-ever Time Out Philadelphia Bar Awards, which honors the best and brightest of the bar scene (and helps you decide where to go for happy hour). Below, you’ll find the full list of 2018 Time Out Philadelphia Bar Awards winners and runners-up, which were chosen by a trusty team of industry insiders and folks-about-town who know their way around a cocktail joint. With their help, we came up with a consensus about the new bar the city absolutely can‘t live without, must-visit breweries, establishments that have the most creative drink lists and the most Instagrammable cocktail in the city so you can get it on your IG feed, pronto. Check out the full list of winners below. 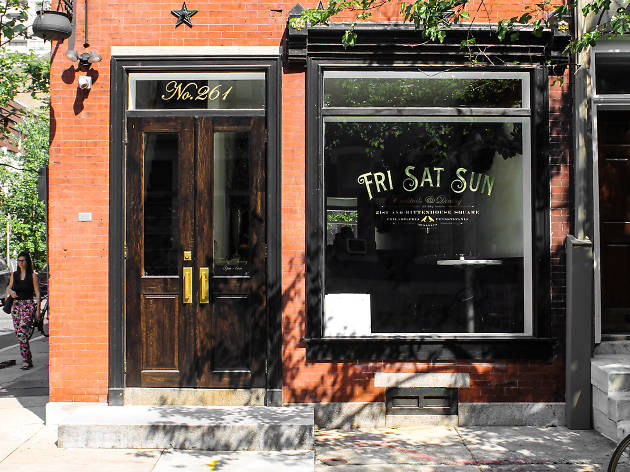 When Chad Williams and his wife Hanna took over this beloved Rittenhouse institution, Philadelphia foodies were curious to say the least. After an elegant revamp of the two-story space and a complete menu redux, the bar is as bustling as ever and Williams’ refined take on American fare has won legions of fast fans among critics and locals alike.

Judge’s take: “Chad and Hanna Williams have accomplished something special in modernizing a landmark restaurant like Friday Saturday Sunday,” says Bar Awards judge and writer Drew Lazor, who just released his latest book, Session Cocktails: Low-Alcohol Drinks for Any Occasion. “Their bar manager, Paul MacDonald, is a significant part of this success. I admire his creativity and penchant for experimentation when it comes to cocktails.” 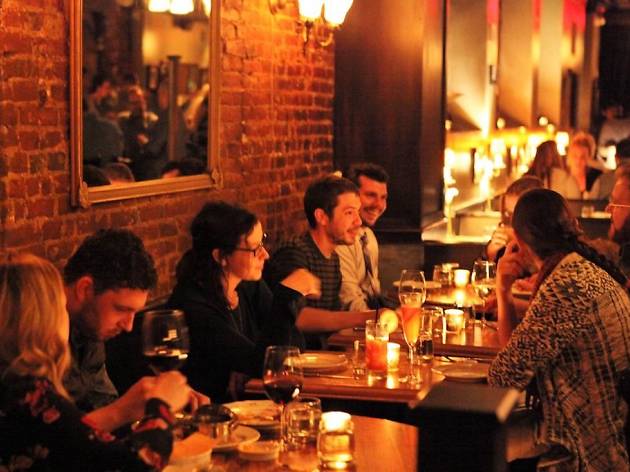 Nick Elmi’s Old City debut is a collaboration between the Top Chef winner and Philly bar royalties David Frank and Stephen Simons (of Cantina Los Caballitos, Dos Segundos, Royal Tavern and Royal Izakaya fame). A selection of raw-bar offerings and house-made charcuterie complement snacks and larger dishes, all graced with Elmi’s signature French touch. The bi-level leather-and-wood dining room is warmed by a fireplace, making it the ideal place to share a few plates, a couple of cocktails and a bottle from the wine list that features natural notes.

Judge’s take: “Nick Elmi is a trailblazer in the Philly cuisine and cocktails scene,” says photographer and spirit enthusiast Tyler Cameron, who runs @phillycocktails on Instagram. “The bar features an expertly crafted menu with an ambience to boot. I can't say enough about this place.” 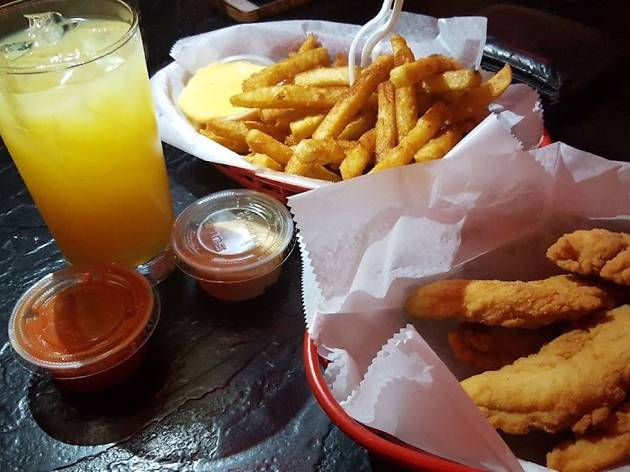 A refreshing juxtaposition from the posh-ness of nearby Rittenhouse Square, Oscar’s Tavern is a Center City staple when you want to bypass all the fancy-pants cocktail lounges and wine dens in the area for cheap beers, greasy pub grub and a friendly yet take-no-bullshit waitstaff. The joint, which opened in 1972, has an almost diner-like feel, decked out with wood-paneled walls, a lineup of stools at the bar and a row of ripped red-vinyl booths, which fill up fast when the after-work crowd rolls in, roughly between 5 and 8pm. In the back, you’ll find tables, single-stall bathrooms and a jukebox cranking nostaligic tunes. The bar situation is pretty straight-forward, featuring familiar beers such as Rolling Rock, PBR and Yuengling—all for around $4 or $5. Cocktails are run the gamut from Screwdrivers and martinis to gin and tonics and Long Island iced teas. On the food from, there’s massive cheesesteaks, chicken fingers, no-frills burgers, drippy cheese fries and other plates perfect for soaking up all the alcohol. Order up and take in the scene.

Judge’s take: “Anyone who lives or works in Center City knows about Oscar’s,” says Erik Andersson, brand ambassador for Hendrick’s. It’s a legendary establishment with greasy food, cheap drinks and a fun atmosphere. This is a Philly dive bar at its very best.” 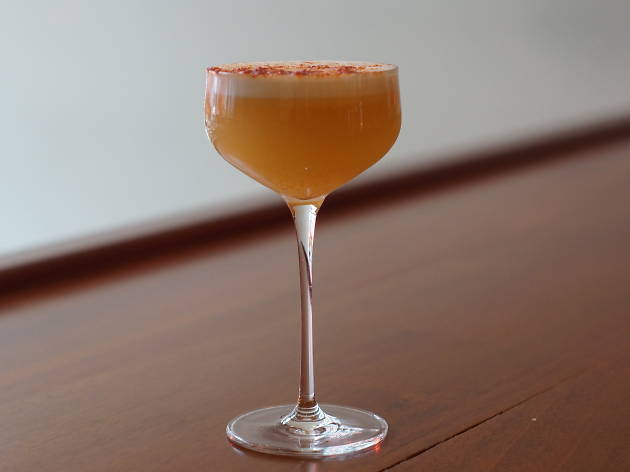 Oloroso for its sherry selection

Chef Townsend Wentz has proved his mastery of French fare at his eponymous Passyunk spot, he’s expertly executed Italian at A Mano in Fairmount and is now on to Spanish small plates in Midtown Village. Named for an easy sipping sherry typically matched with tapas, the menu is built for grazing with classics like croquetas, boquerones and sharable pans of paella. A Spanish-leaning wine list is complemented with pours of bright Basque cider, various vermouths and of course, a selection of food-friendly sherries.

Judge’s take: The sherry category has definitely become more popular over the years, especially with bar programs trending toward adding low-ABV options to their cocktail programs and menus,“ says David Powell, brand ambassador for Flor de Cana.” Oloroso (which takes its name from a sherry classification) has embraced the value of this Spanish fortified wine, which works as a cocktail modifier or an aperitif, and as a result they are being celebrated with this award. 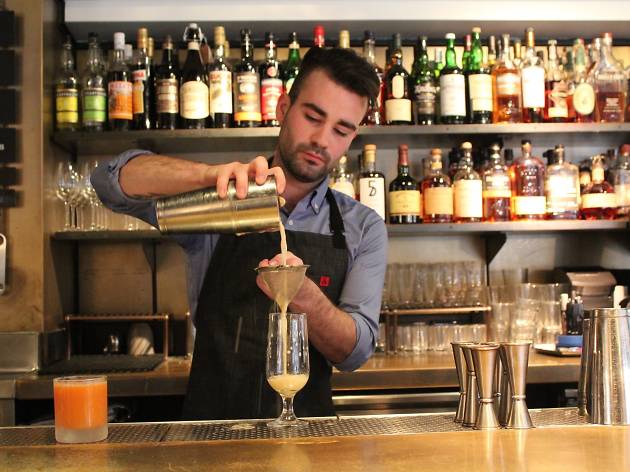 This slick, contemporary space sits in the heart of the trendy Rittenhouse neighborhood (and just caddy-cornered from the park), making it an excellent place to pop in for a drink and A-plus people-watching after work. Grab a seat at the bar or at one of the booths or high tops that line the periphery and make your way through an inventive craft cocktail list that changes with the season and features fresh ingredients such as herbs and cold-pressed juices. The Lucy I’m Home is a particularly refreshing option, concocted with beefeater, Aperol, St. Germain, ginger, lemon and orange blossom water. You’ll also find a beer and cider on draft or in cans, a selection of wines and a dozen varieties of amari.

Judge’s take: Sibling writing team Tenaya and André Darlington, who just released a new cocktail-centric coffee table book called Booze & Vinyl: A Spirited Guide to Great Music and Mixed Drink, say that “We have always loved the drinks and the creativity of the bartenders at a.bar. They put out consistently impeccable cocktails. The use of homemade shrubs and fresh ingredients (carrot juice, hibiscus) always gives its cocktails a nudge toward the unusual, yet there is always a sense of restraint. The recipes are both inventive and well balanced.” 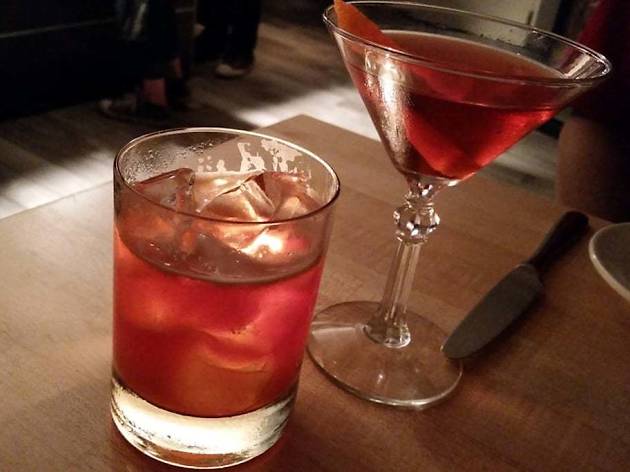 This cozy two-level eatery offers inventive seasonal dishes like Spanish mackerel ceviche venison au poive or a small-plate char-grilled octopus niçoise. Settle into a warm wooden table or grab a spot at the friendly back-lit bar and try out one of the seasonal cocktails, like the Palomino (tequila, grapefruit, cardamom and kaffir lime). 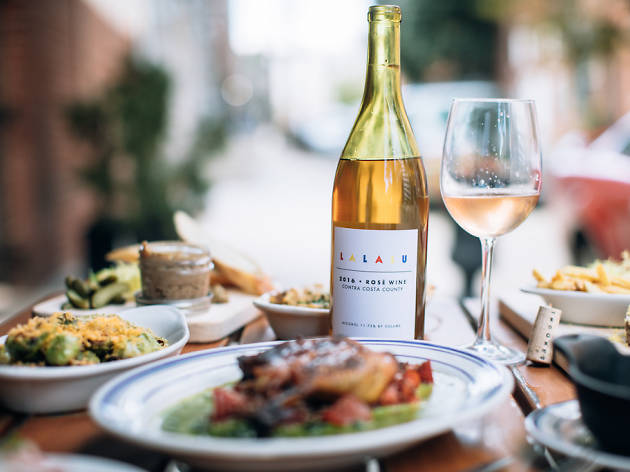 Yellow walls and blue banquettes set the scene for this French bistro just off of South Street. Wine lovers can opt for a glass or bottle from the restaurant’s good, better and best list of reds and white, or explore the bottle list for more esoteric finds. In the kitchen, textbook versions of French classics, such as pork rillettes and steak frites, are joined by inspired takes on escargot and root-vegetable gratins.

Judge’s take: “Great wine programs allow guests to explore the world, one glass or bottle at a time,“ says Powell. “While wine lists can be intimidating, the Good King Tavern has broken up its menu into flavor profiles, rather than listings by region or by grape. This allows even a wine novice to find an incredible bottle without having to be a connoisseur. There’s also great diversity in the price points, inviting everyone to enjoy a bottle without breaking the bank.” 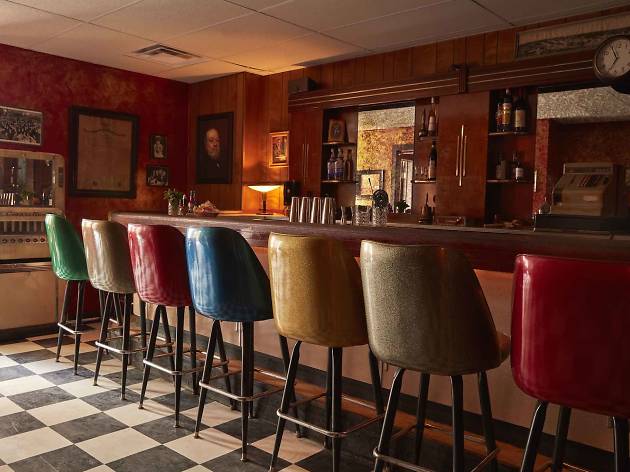 Taking over his grandfather’s members-only South Philly social club, Zeppoli chef Joey Baladino has reimagined the space into an intimate Italian-American enclave. To keep things in the family, a limited number of memberships are available at the door each evening. Once you’re in, order a well-mixed negroni and don’t miss the stuffed artichokes, spaghetti with crabs and housemade spumoni. 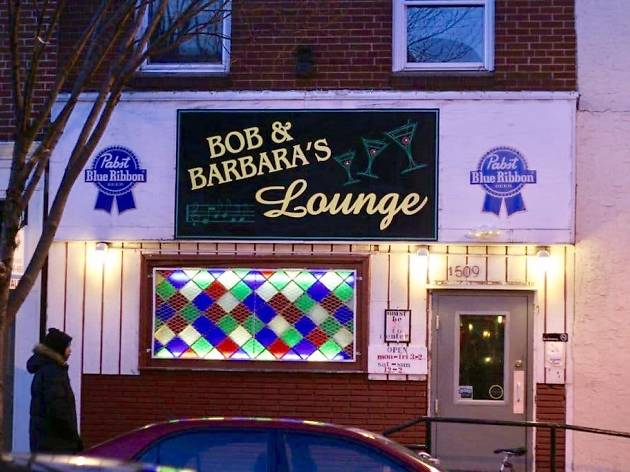 Bob and Barbara’s Lounge has been a South Philly institution since the late ’60s. Go on a Friday or Saturday night to listen to the Hammond B-3 organ combo playing "Liquor Drinking Music” or a Thursday night to sit in the front row for Philly’s longest running drag show. Be sure to grab a “Citywide Special” before the night is out. They say the legendary Philly drink—a can of Pabst Blue Ribbon and a shot of Jim Beam for $3—originated here.

Judge’s take: “Apart from holding the title as the originator of the Citywide, Bob & Barbara's draws one of the most diverse crowds in the city, bringing everyone together for a great time,” says Cameron. What’s more iconically Philly than that? 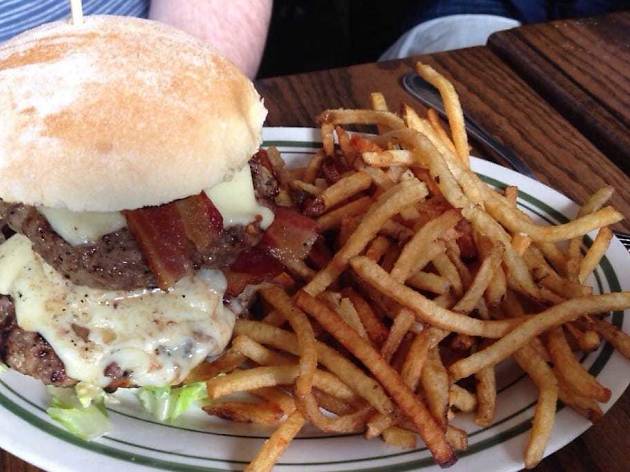 Chef Steve Eckerd took the reigns of this Graduate Hospital corner spot in 2017 and has since revamped the menu to include upscale soul-food plates like chorizo-stuffed poblanos with sweet corn and fried chicken with summer pepper ragout.

Judge’s take: “The crew at P&K always makes me feel so comfortable and welcome. They're all true pros just as happy to queue up a restorative shot and beer as they are to mix the perfect Penicillin,” says Lazor. 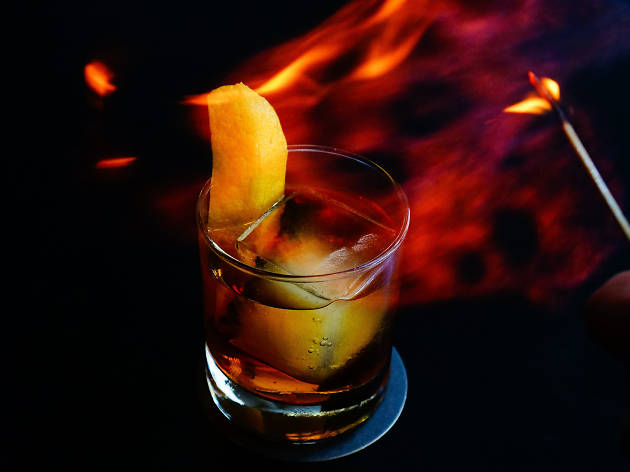 Judge’s take: “This is a rich drink with complexity,” say the Darlingtons about the cocktail that’s on the current menu at a.bar for $15. “We love the combination of smoky Laphroaig, hellfire shrub and absinthe to a rye cocktail. It's been a perfect antidote to an erratic spring.” 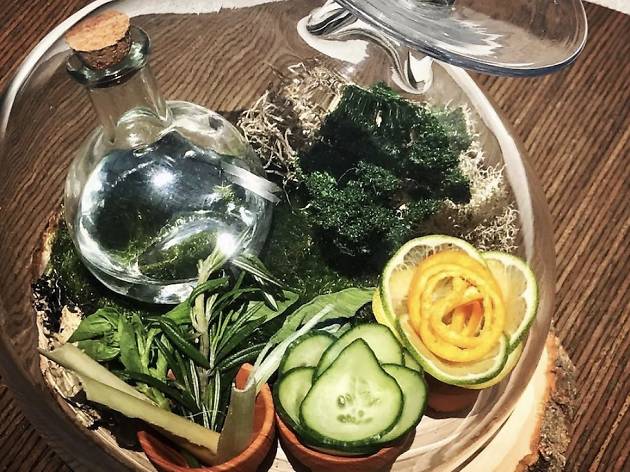 Maison 208, with its cool retractable roof, is already one of the most photogenic rooftop bars in Philadelphia, but its large-format variation on the gin and tonic will have people double-tapping your IG feed like crazy. Just as much of an experience as it is a refreshing cocktail, all the drink’s makings—cucumbers, limes, rosemary and of course Tanqueray and tonic—come to the table under a large glass dome. You flip that dome over, pour all the ingredients into it and voila!, you have a punch bowl full of spirits to dip out and share with your friends. Seriously, bring friends. You can’t drink this alone. (They can also help you split the $30 tab.)

On the hunt for cheap drinks? 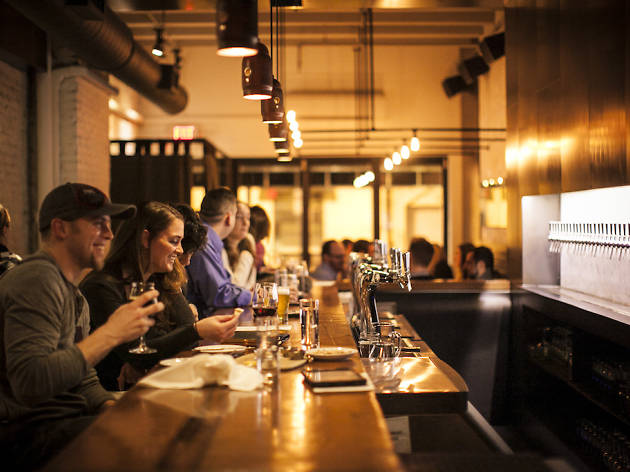 Find cheap deals on beer, wine and cocktails in some of the best bars in Philadelphia