Who says you need to fly to Japan in order to indulge in delicious, fresh sushi offerings. From half-priced donburi bowls and CBD set lunch deals to salmon sashimi madness, along with a sake or two to end off the meal, here's a list of affordable yet delicious sushi offered across the island. 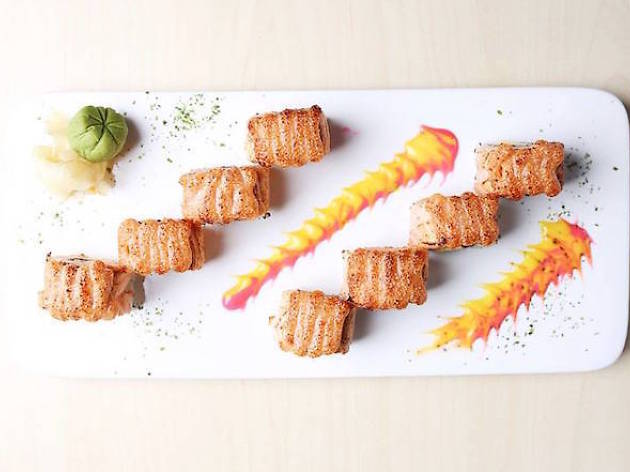 Serving up quality and affordable Japanese dining since 2009, Standing Sushi Bar has since expanded into four outlets conveniently located in the CBD and Bras Basah district.

Undeniably popular, one of their best value-for-money permanent promotions running has got to be the Salmon Madness, where you can get five pieces of salmon sashimi for $3, sake for $2, and $5 beer, wine, hot sake, and umeshu. This deal runs every Monday and Thursday across all four outlets, available during dinner, and lunch as well for the Singapore Art Museum location. Do check their website for further details on daily promotions happening every week across their outlets.

CBD working individuals can now also enjoy their healthy, delicious, and affordable $9.90 takeaway bowls at their CBD outlets from 11.30am to 2.30pm with a choice of salmon, salmon mentaiko, salmon avocado, spicy tuna, or unagi donburi. 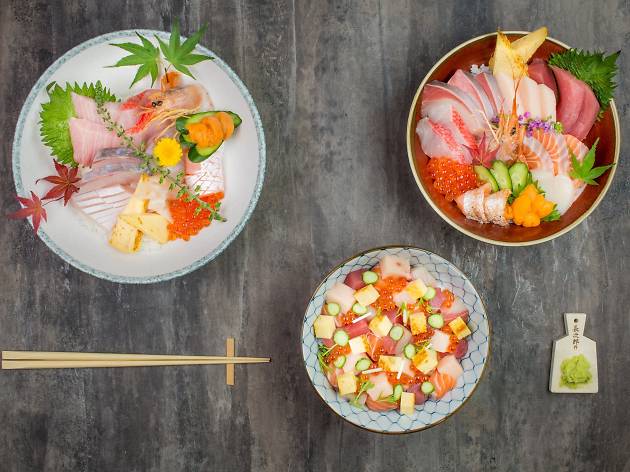 The Sushi Bar offers fine Japanese food in a casual environment where customers can relax and enjoy every bite whilst not worrying too much about their wallets. Promising to give the best experiences to the customers, the menu is constantly changing to incorporate new dish ideas to challenge the status quo, serving customers quality options to venture and try.

Dig into their Bara Chirashi Don ($19.90) with a scrumptious range of fresh sashimi cubes over rice, or take a bite into their popular juicy salmon aburi roll ($16.90) and dragon roll ($25.90), tiger prawns topped with unagi and avocado.

Eastsiders can also now enjoy their delicious chirashi dons for weekday lunch at $11.90 at their newest outlet Tampines 1. 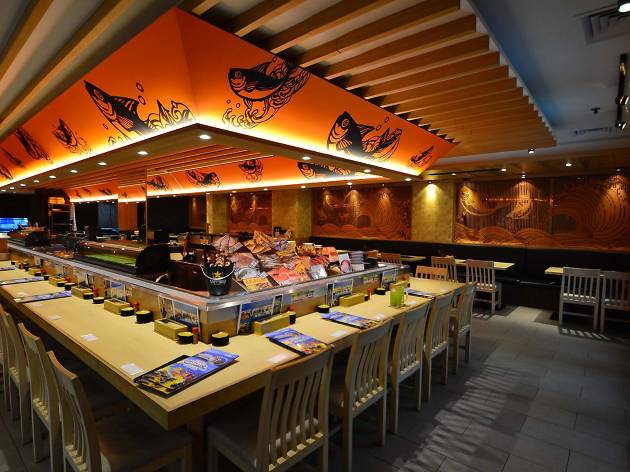 Take a bite into the freshest sashimi flown directly from Japan here at Ryoshi Sushi Ikeikemaru. Don’t be deceived by the conveyor sushi belts circulating around the restaurant. Promising quality sushi at relatively affordable prices, it offers a large range of fresh sashimi and sushi varieties for you to choose from, such as tuna, unagi, squid, and sea snail, starting from $1.80.

Look out for the crowd favourites Negitoro ($2.80) and Mentaiko Scallop Sushi ($6.80) and grab it before it’s all gone to indulge in its creamy goodness. Bite into explosions of goodness with the Salmon Ikura Kobore Sushi ($6.80), which is overflowing with ikura chunks atop fresh salmon cubes.

If you’re feeling a little fancy, have a go at the value-for-money Kaisen Don Set ($33) that comes with a chunk of uni (sea urchin), large sweet prawns, crab flesh, assorted sashimi slices with a salad and miso soup on the side. 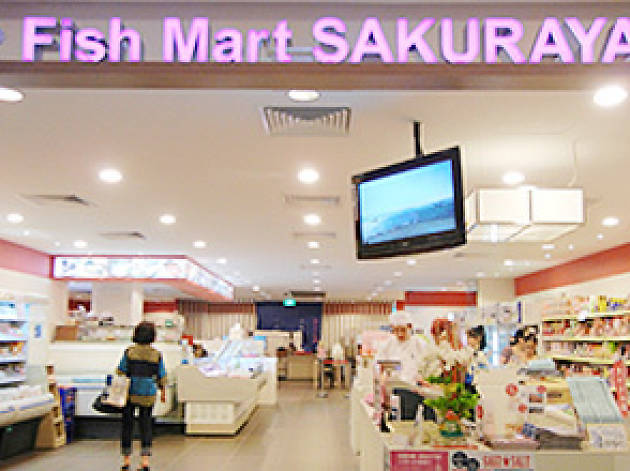 Nestled within a Japanese supermart lies this hidden treasure trove of glorious fresh sushi and sashimi. With three outlets located in shopping malls at the three corners of Singapore – North, East, and West, Fish Mart Sakuraya is the heartland’s secret. Serving up a wide variety of offerings air-flown directly from Japan, tuck into the sakura sushi platter ($38) with up to 11 varieties of nigiri sushi to savour, as well as the kaisen–futomaki sushi ($10/eight pieces) and tamago unagi-maki sushi ($7/eight pieces). Don’t forget to indulge in the freshest of sashimi produce that is sliced freshly for you upon ordering, including Salmon Belly ($9.90/100g), Tako (Octopus) ($9.80/100g), Hamachi (Yellowtail Tuna) ($13/100g). 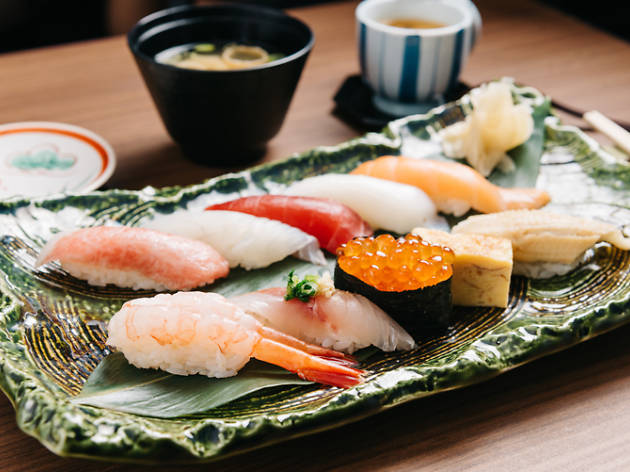 Great sushi starts from exceptional produce, and that’s exactly where Tsukiji Sushi Takewaka shines. Takewaka’s first store opened 28 years ago in Tsukiji, so with such close ties to its suppliers, the restaurant is pretty much guaranteed the freshest catch.  As the chain’s first venture outside Japan, Takewaka finds itself at the Japan Food Town in Wisma Atria. Occupying a quiet corner, the space is both refined yet comfortable with wood accents that give off that distinctive Japanese feel. Choose between a seat at the counter or the floor – though we’d always recommend the former so you can witness the magic happening.

For lunch, Takewaka’s Edomae set ($14.40) has eight pieces of sushi including tuna, salmon and prawn among other chef selections. But if you’re craving something more premium for dinner, order the Takumi set ($45.30), which comes with ten pieces of nigiri. We’re surprised to find anago (saltwater eel) in it, a less unctuous version of unagi (freshwater eel), along with other crowd-pleasers like ikura and chutoro. 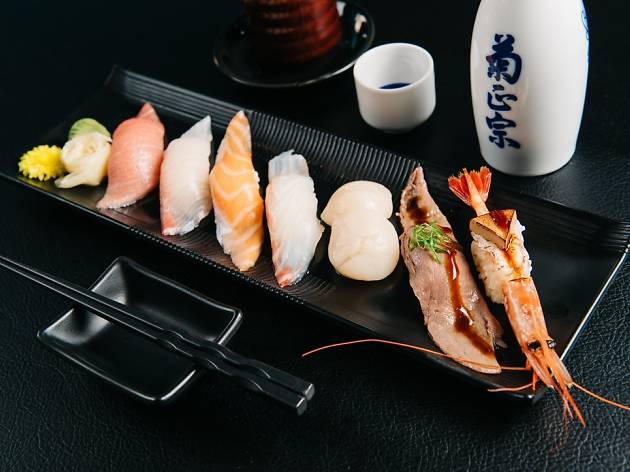 Located in the basement of Marina Square’s new retail wing, Emporium Shokuhin has eight dining outlets to choose from, but tuna lovers should make a beeline for Senmi Sushi.

Every Monday and Friday sees a huge shipment of bluefin tuna from Nagasaki – 50 kilograms of the fish, no less – making the chutoro ($6.80) Senmi's pride and joy. The medium-fatty tuna is by far the best in its list of nigiri sushi – rich and buttery with just enough fat – with the in-season shima aji ($4.80) coming in a close second with its firm yet light texture. While the rice has a good bite and holds its shape well, it’s nowhere near vinegary enough. That's not necessarily bad – perhaps the restaurant doesn’t want to mask the sweet profile of the Hokkaido Nanatsuboshi rice it uses.

Senmi’s soya sauce is brewed with dried bonito and aged in-house for three weeks, guaranteeing an umami burst. But the effort is let down by the wasabi – it’s your typical chalky, nostril-clearing paste. Quash the temptation to order the wagyu beef nigiri ($5.80): the thin strip of lightly seared beef is flavourful but unmemorable compared to the others. Also hold off the salmon belly ($2.40). Our strangely bright orange sliver has hardly any fat. Another noteworthy section of the menu is the range of sake ($20-168/bottle), with two out of eight available by the glass ($16-22). 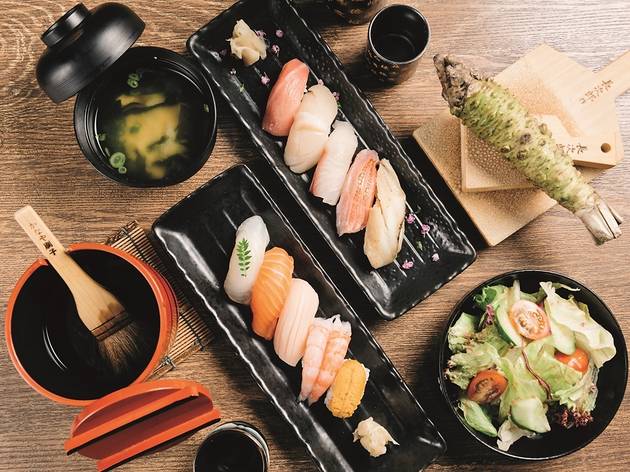 Visit on any weekday and it’s evident that Koji Sushi Bar has amassed a loyal following of white-collared types thanks to its affordable lunches. Opened in 2014, the casual sushi and sashimi joint is helmed by chef-owner Benny Cheong, formerly of Shunjuu Izakaya.

Four sushi sets, served with a salad or miso soup, are available during both lunch and dinner. We suggest homing in on Set C ($20) and D ($24) to sample the seafood on offer, replenished every Tuesday and Friday. The anago is a standout with its incredibly soft texture and leaves a sweetness on our palate, as is the beautifully marbled chutoro.  What sets Koji apart is its freshly grated wasabi – a rarity at this price point – hidden within each nigiri. You also get a tub of housemade soya sauce, which you can individually brush on the nigiri and pretend you’re a bona fide sushi master. 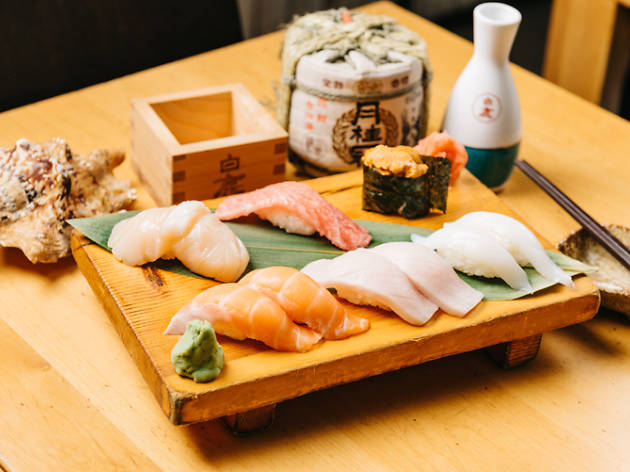 Koh Grill is the fast food equivalent of a sushi bar: rolls of its famed Shiok Maki ($16.80/eight pieces) are pre-prepped, cling-wrapped and then stowed beneath the counter for easy access – because orders for it come faster than the chefs can move. Aburi salmon sashimi is propped atop unagi and avocado, drenched in a Kewpie mayo-based sauce that’s blowtorched to deliver charred hits of flavour, then loaded with capelin roe. We do mean loaded. This may be too rich for some – it’s quite liberal with the latter two ingredients – so offset it with some nigiri.  Go for the hotate ($6-$8/piece), a generous portion that’s delicate and sweet. The uni ($12/piece), with its pungent, brinier flavour, is just a pinch short of Tomi Sushi’s version – as is the salmon nigiri ($2.80/two pieces). Still, they’re pretty decent for the price. And come during off-peak hours: waiting times stretch for up to 80 minutes otherwise. 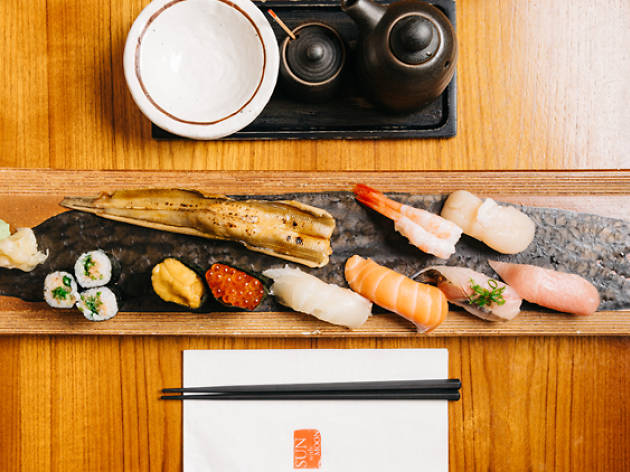 Pricing itself slightly higher than the run-of-the-mill chain outlet, Sun with Moon promises better ingredients to those weary after a day of shopping. Dinner boasts more nigiri sets – five, to be exact – than lunch, including a salmon sushi moriawase ($23.80) with six kinds of salmon sushi such as aburi shio and aburi mentai. The sushi moriawase ($49.80) offers a mix of ten varieties, including a rarely found shirasu (whitebait) gunkan, which has a smooth texture and slightly bitter aftertaste. We fancy the horse mackerel – its sheen mimics its clean bright taste – and the uni. The negitoro and amaebi, while not top of their class, are also decent for their price tags. 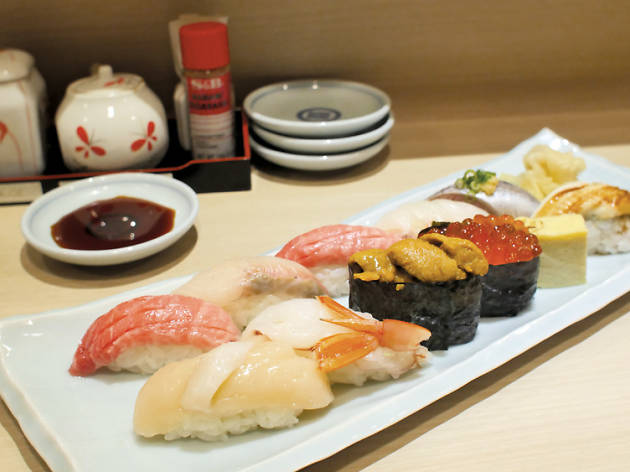 Tomi Sushi’s birthed in a prefecture that’s renowned for its rice. So it’s no surprise the 62-year-old chain only uses rice from Niigata – and brings in sashimi thrice-weekly from the local market in the prefecture’s capital city. It’s a bonus, because we’re here for the nigiri. Specifically, the 11-piece Tokujyu Nigiri ($59) platter, assembled before our eyes by chefs Nagai Tomonori and John Oh. Expect all the classics, among them tamago, hotate, ikura, iwashi, tai and anago. The otoro is a melt-in-themouth experience that ensures you’ll only be chewing through your warm ball of al dente rice, while the hirame cleans the palate with its light flavour. But we’ll save the best for last. The uni at Tomi is a sweet and creamy morsel that glides across the tongue. 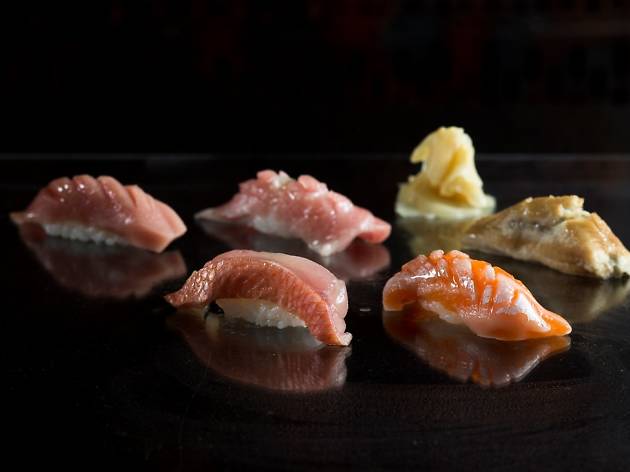 Nestled among the trove of Tiong Bahru cafés lies a Japanese-French restaurant, whose unassuming façade of dark-tinted windows gives nothing away. If you’re gunning for sushi and sashimi, sit yourself on the eight-seater counter.

And you should, because the nigiri sushi set is only $28 while the aburi sushi set clocks in at $35 – both come with five pieces. You can indicate your preference, or leave it up to the chef to decide based on the day’s freshest catch. The sashimi is flown in every Tuesday and Friday straight from Tsukiji, and it shows. The ika, lightly scored and almost translucent, drapes over the sushi rice and gets sweeter on each bite. And the hotate, butterflied and served as two pieces because of its size, is rich, sweet and melts in your mouth. IKYU gets its rice from Niigata and does justice to it: it’s slightly sweet and tart, comprises individually distinguishable grains and holds its shape when compressed. Likewise, the soya sauce, mixed in-house, is an umami bomb and is served in a little saucer.

A pity, though, about IKYU’s wasabi – it’s still the real deal and not horseradish paste in disguise – that came from a tube. Freshly grated wasabi would have completed the dining experience. Also it’d be wise to pass on the uni. At $38 a pop, it’s simply way too expensive even if it’s freshly flown in that day. Consider yourself warned. 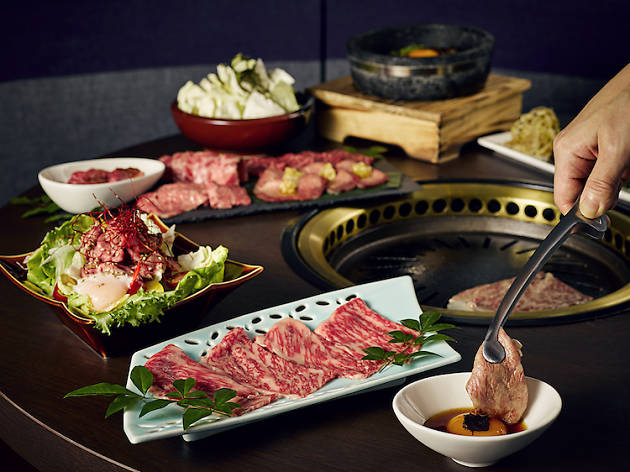 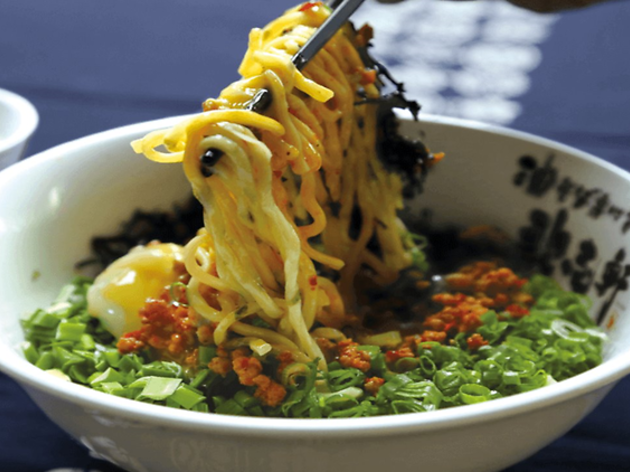