If you think that Singapore only has two seasons – hot and hotter – you're not wrong, but we'd much prefer thinking of it as durian season and no-durian season instead. The bumper crop usually arrives in July and lasts till September, but it seems like we've been #blessed with a bumper crop in June due to a supply glut from Malaysia.

Prime your stomachs (and throats) because this season, durian prices are a fraction of what they typically would be. There have even been reports of shops selling Mao Shan Wang durians from a mere $10. So instead of gravitating toward mainstream favourites like the D24, switch things up a bit by giving some lesser-known varieties a go.

This durian variety typically has a round and ball-like exterior and its flesh is often compared to butter – which speaks to how smooth and creamy it is. Ganja durians are also bitter and put up a tough fight against perennial favourites like D24 and Mao Shan Wang. From $8/kg.

Even though this is one of the more expensive durian varieties out there, it’s good value for money given how small the seeds are. Bite into its dark yellow flesh to see why it’s such a crowd pleaser – it's the perfect balance of sweet and bitter. D24 durians are also sometimes referred to as Sultan durians. From $11-18/kg.

XO durians have an extended fermentation period, lending them an alcoholic aftertaste. Don’t be alarmed if the flesh looks like it’s gone bad – it’s meant to be watery and suspiciously soft. From $12-$18/kg.

Its vibrant orangey-red flesh is sticky, intensely sweet and highly pungent – perfect for those with a sweet tooth but probably not our pick for those new to durians. Equally distinct is its name that translates to 'Red Prawn'. From $8/kg.

By far the most coveted durian variety in Singapore, the main novelty of indulging in Mao Shan Wang (MSW) durians is that you won’t know what to expect – its sticky-creamy flesh can be sweet, bitter or even bittersweet. From $10-$20/kg.

Looking for something even better than MSW? Then you have to try Wang Zhong Wang, which literally translates to the king of kings. The triple-A grade MSW durians are set apart from the pack for its well-balanced bitterness and velvety smooth texture. From $18/kg.

This Malaysian-bred durian is a pale greyish-yellow and is slightly bitter. As its name suggests, Black Pearl durians are rare and pricey. If you do manage to get your hands on them though, you’ll be intrigued by how small their seeds are. From $17/kg.

Just like how Wang Zhong Wang durians are the highest expression of MSW durians, Black Gold durians are a grade higher than Black Pearl durians. It has the same greyish undertones in its flesh but a silky custard consistency that'll have you slurping up the flesh from its seeds. From $17/kg.

Hailing from Thailand, Mon Thong translates to “golden pillow”. True to its name, these durians are bright yellow and known for their creamy, custard-like texture. What’s more, their mild yet sweet flavour makes them commercially sought after. From $14/kg.

Easily identifiable by its elongated oval husk, this varietal of durian has pale yellow flesh and small seed. It's fibrous but creamy and has a slight bitterness – think of it as a poor man's MSW. From $10/kg.

The best places to buy durian in Singapore 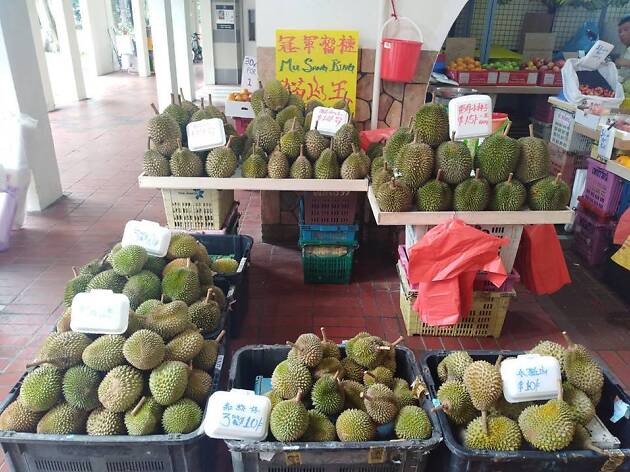 One of the most affordable places in town to get your fix of durian, Ah Sam is currently offering its best-selling MSW for $10 per kg. It even sells its smaller sized varieties like the Hor Lor, Red Prawn and the D101 for $5 each, a price that's nearly unbeatable. Its facebook page is also regularly updated with stock notices, deals and discounts (yes, your durian vendors are now internet savvy!), so be sure to check in often in order not to miss out. 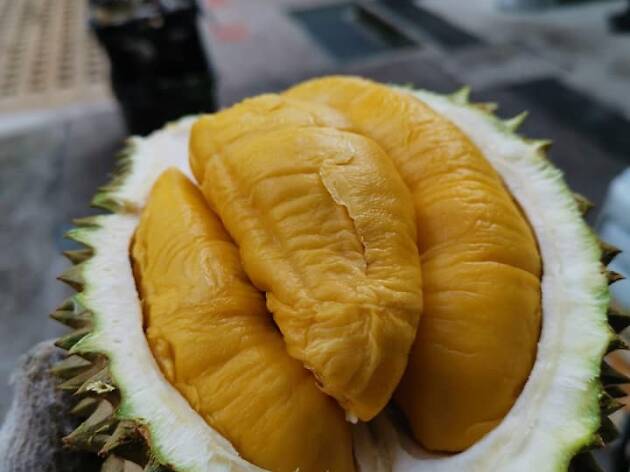 This durian vendor impresses with its trendy logo and host of services – doorstep delivery, corporate and private events, live stations and packaging to be shipped overseas. You can even send a text to the vendor to make your reservations and orders. It offers a wider range of durian varieties than most, with the crowd-favourite MSW ($20/kg), Golden Phoenix ($20/kg), Red Prawn ($12/kg) and Wang Zhong Wang ($22/kg), as well as lesser seen types like the D1, D2, D13 and D28 ($12/kg). 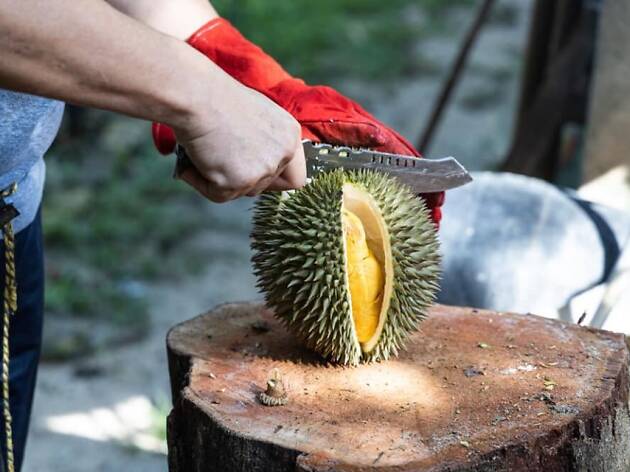 With a name like Dr Durian, you best believe this joint knows what it's doing when it comes to the King of fruits. It claims to only source the freshest durians for sale, and its modern outlook is boosted by delivery offers and corporate and private event services. It even packages its durian in air-tight sealed paper bags so its patrons have no need to worry about the fruit's pungent aroma clouding up their cars or public transport vehicles. Current stock includes the Pahang black gold ($25/kg), butter king durian ($17/kg) and Pahang grade 'A' MSW ($23/kg). 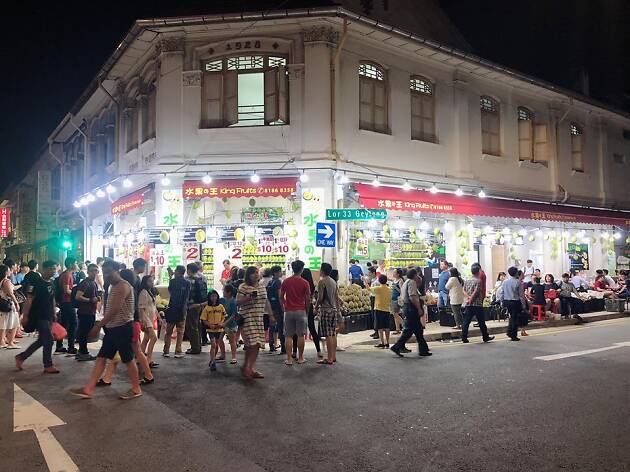 This durian hotspot along Geylang is well-known for its large stock of durian varieties, from the MSW (from $10/kg) and Golden Phoenix ($15/kg) to the Xiao Feng and Red Prawn (from $10/kg). Its sizeable stock means that the vendor rarely runs out, so feel free to head down whenever the cravings hit. They also have a second outlet at Havelock road and one in Malaysia. 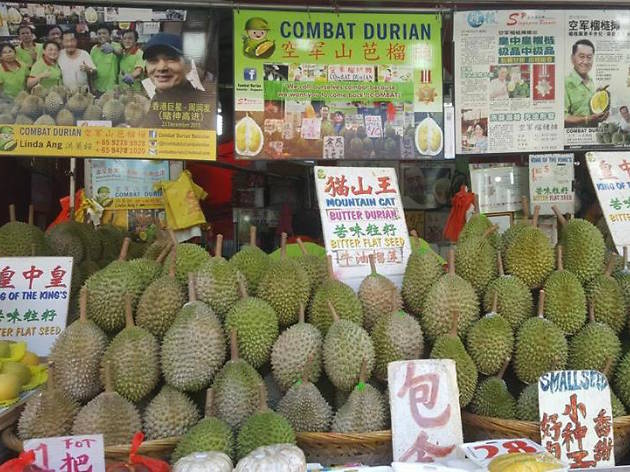 Having been in the durian business for over 50 years, Combat Durian has its own plantation in Malaysia where it gathers its stock from. You can find a wide variety of durians but not to be missed is the MSW that comes highly recommended. MSW durians are currently priced at $18 per kg, Red Prawn at $10 per kg and Xiao Feng at $10 per kg – head down early to avoid disappointment as they've been selling out on the daily. 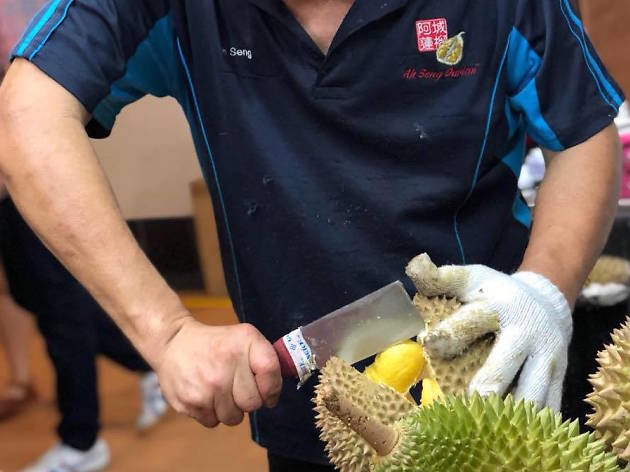 Ah Seng Durian made headlines recently, with the brothers running the place pleading guilty to not paying taxes and failing to register for Good and Services Tax when their revenue exceeded $1 million. The brothers have since apologised to their customers on Facebook and continue to sell durians to their loyal fans. Many people still maintain that Ah Seng is one of the best places to get your taste of the stinky fruit in Singapore due to its affordable prices and dependable service. This durian season, it's offering MSW durians at $17 per kg, Golden Phoenix at $17 per kg and cheaper D13 durians at $9/kg. 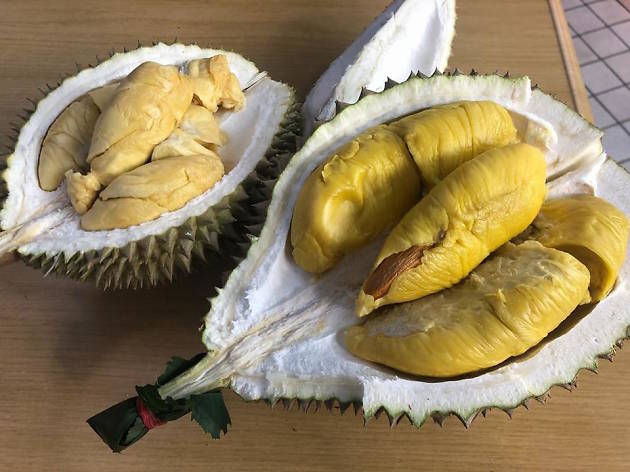 Specialising in D24 and MSW, Durian Lingers has two outlets in Singapore – one in Bukit Timah and the other Joo Chiat. Get your fix for cheap with D13 durians priced at three for $10 or $5. If it's the premium stuff you're after, MSW durians are priced at $15 per kg, Golden Phoenix at $18 per kg and the rare Hulu King at $22 per kg. Beyond durian, you are also able to browse their wide array of other fresh fruits as well. 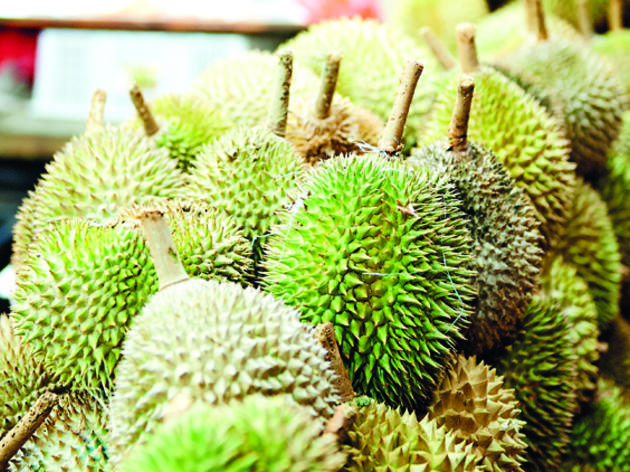 This durian shop out on East Coast Road carries a wide variety of the king of fruits, even kampung durians at $8. For now, MSW, Black Thorn and Golden Phoenix durians are priced at $17 per kg and you can get Green Bamboo and Black Pearl durians at $12 per kg. It plans on bring in different varieties once they come into season so keep your eyes peeled. 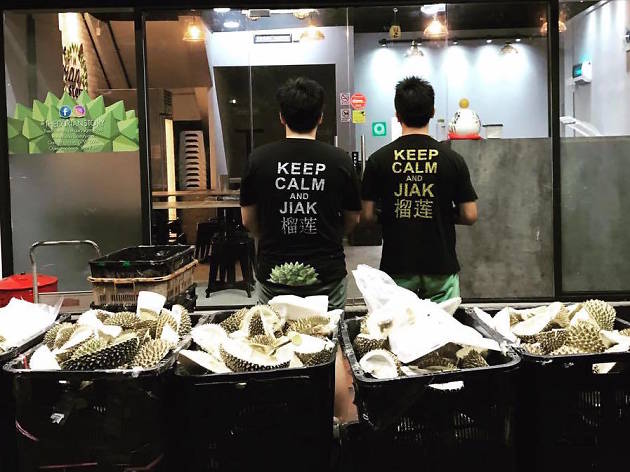 Here, you're able to enjoy all your favourite durian varieties in a modern and air-conditioned space. From the whole fruit straight from its husk to innovative durian-inspired desserts, the modern stall even has a takeaway menu so you can savour its creations in the comfort of your own home. 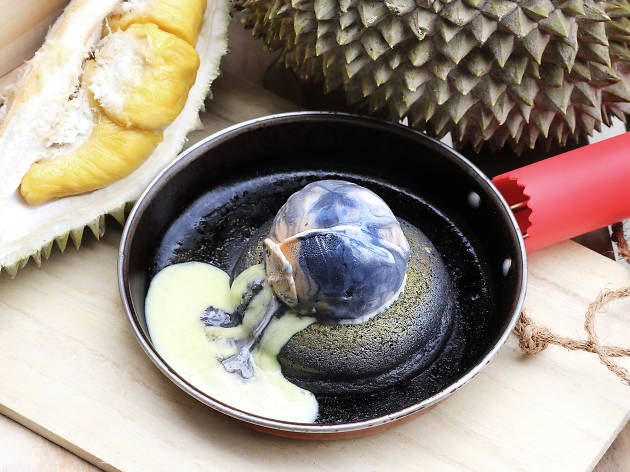 Originated from Bangkok, this dessert place puts a spin to a typical cookie with a scoop of ice-cream slabbed on top, served in a hot plate. Durian lovers, get straight to the Black Gold Cookie ($10.90) which features a charcoal pandan cookie filled with Mao Shan Wang lava. The cookie is served warm with a scoop of tea ice cream to balance the intense and sweet flavours. 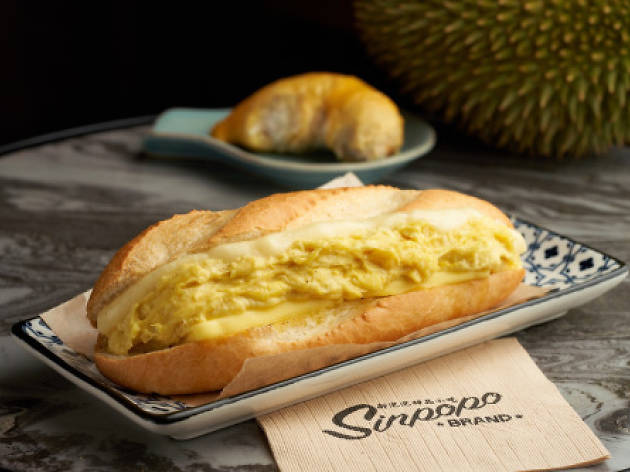 Sinpopo Coffee in Funan is where you'll find Nanyang coffee beans roasted with butter – but prepared like an Italian espresso, glossy cakes with a traditional flair – think pulut hitam, gula melaka and coffee. For savoury grub, you can make your own banh mi using local ingredients and flavours. On top of that, you can also get a durian banh mi. Dig in a crispy baguette filled with creamy Mao Shan Wang durian mixed with crunchy gula melaka bits. We recommend sharing this dessert baguette because there is a lot to go around. 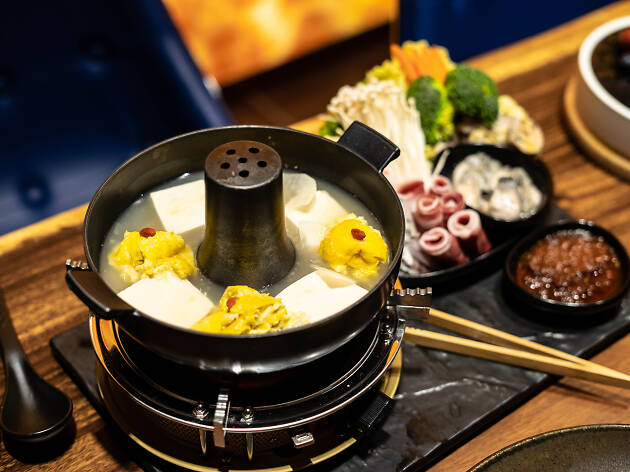 If your love for durians knows no boundaries, a trip to Four Seasons Durians Restaurant needs to be on your agenda. Serving up a unique and unusual menu of all things durians, expect to find pizza, fried rice, nuggets, fries and even coffee with the king of fruits as the main ingredient. Also part of the menu at the Jewel Changi Airport branch is the durian hotpot ($35). Durians are boiled together with the soup stock, resulting in a fragrant and sweet broth in which you dip assorted meats and vegetables. It might not be everyone's cup of tea but if you're feeling adventurous – or just really love durian a lot, then this one's for you. 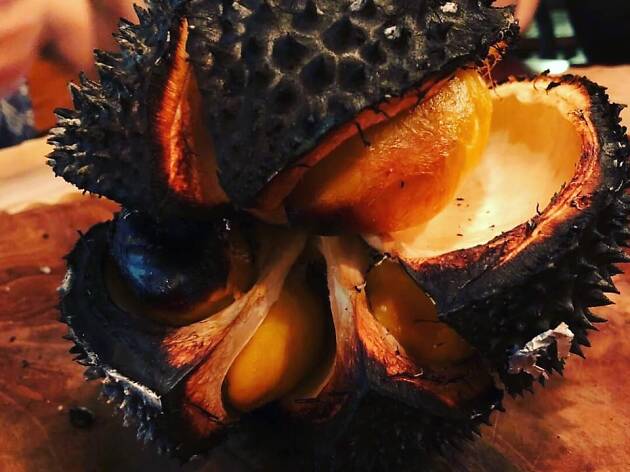 This all-vegetarian cafe also specialises in durians. Think smoothies, crepe cakes, pizza – featuring durian as the main ingredient. One of the signature dishes the restaurant is known for is the Baked Durian. The price depends on the seasonal price (usually starts from $15), but what you get is a whole durian baked in the oven as it is. The outcome? Warm, creamy and slightly charred durian flesh that gets colder in the middle (the durian is baked straight from the chiller) as you eat through a piece. 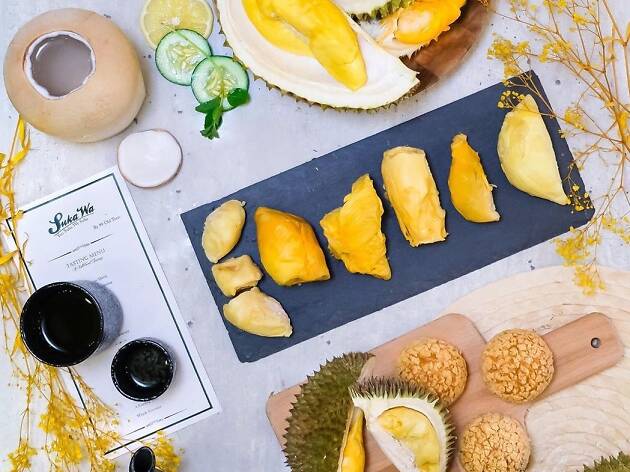 A durian omakase (until August 31)

Devouring durians doesn't always have to be an activity best done at home. At 99 Old Trees, you can feast on durians at an intimate omakase-style session. Book a seat at the table and eat your way through six variants of durian specially handpicked by the restaurant ranging from the popular Mao Shan Wang to the lesser known Black Thorn. Besides unlimited portions of the Mao Shan Wang and D24 Sultan durian, diners also get to try unique house-made desserts like the smooth and creamy durian mousse and cream puff. 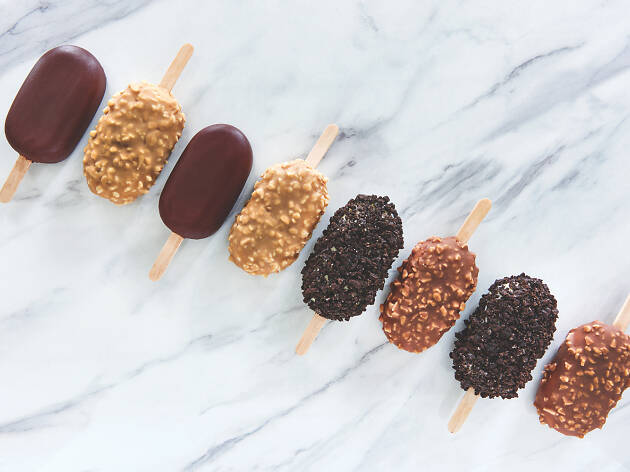 For a full-on durian fiesta

If you dream of eating durian desserts all afternoon (and night too), Goodwood Park Hotel will save you a slot at the Dessert Buffet with D24 Durian Pastries. With prices starting from $39.80 per person, durian lovers can help themselves to as much signature local desserts, cakes and pastries that feature the glorious D24 durian. Take your pick from the spread of cream puffs, mousse cakes, oreo cakes, custard buns, pancakes, hazelnut tarts and more D24 goodies. Don't forget to wash it all down with an icy D24 popsicle.
Read more
Check prices
Get us in your inbox