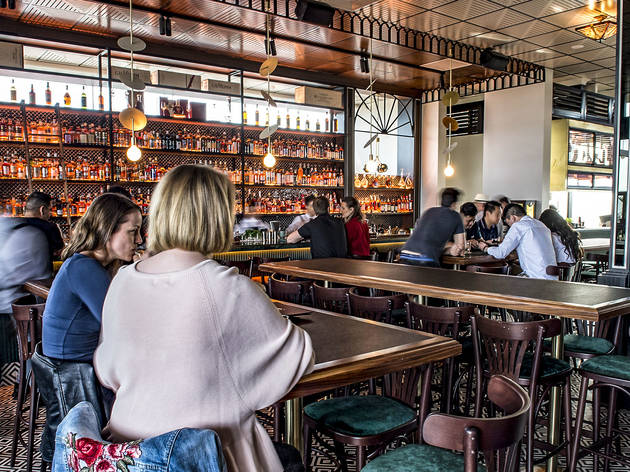 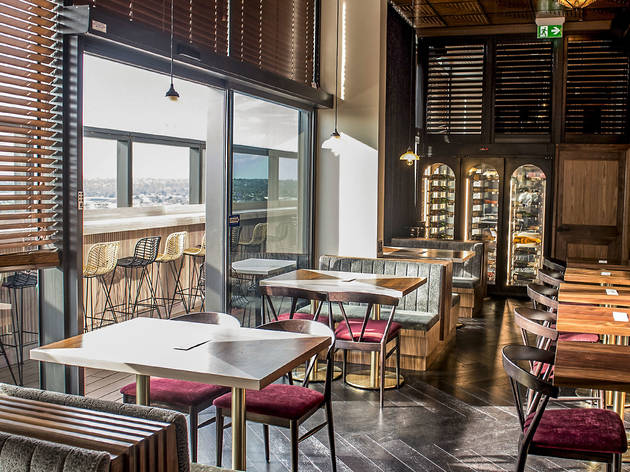 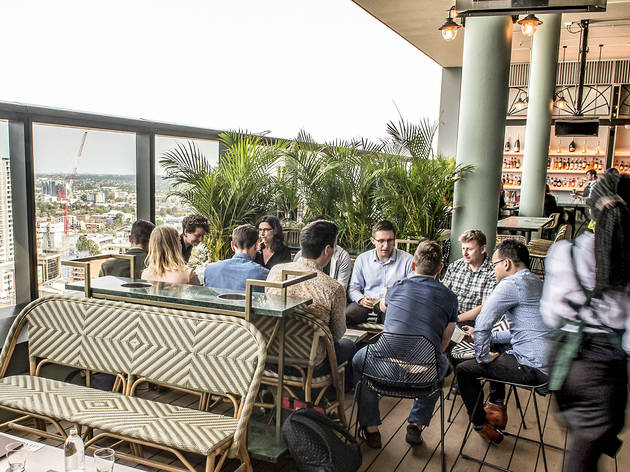 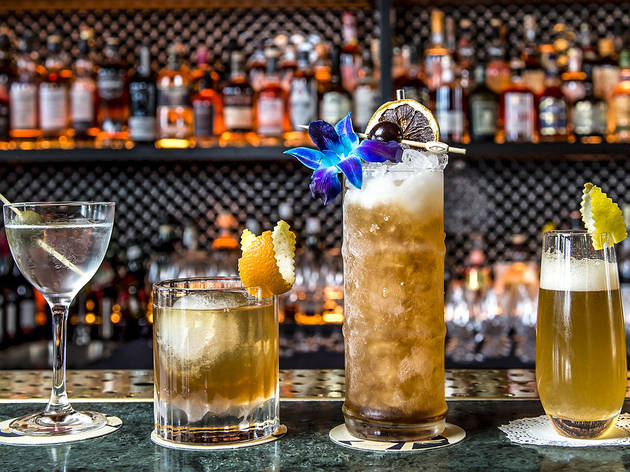 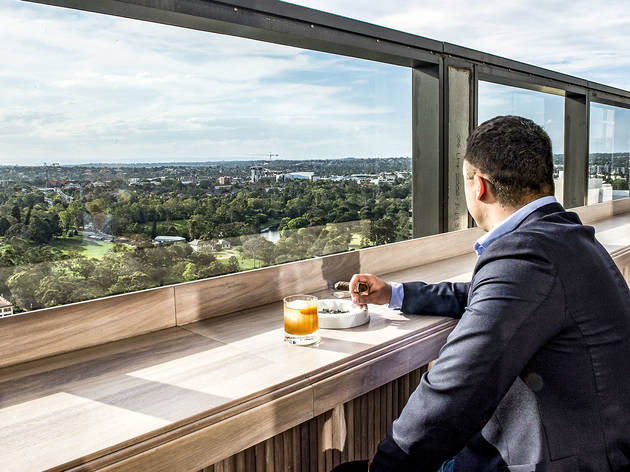 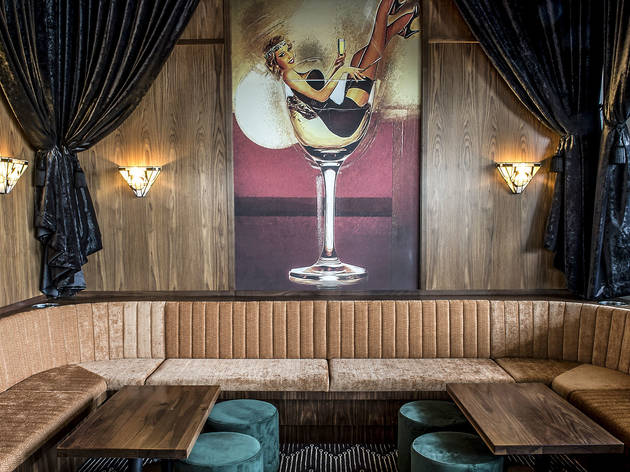 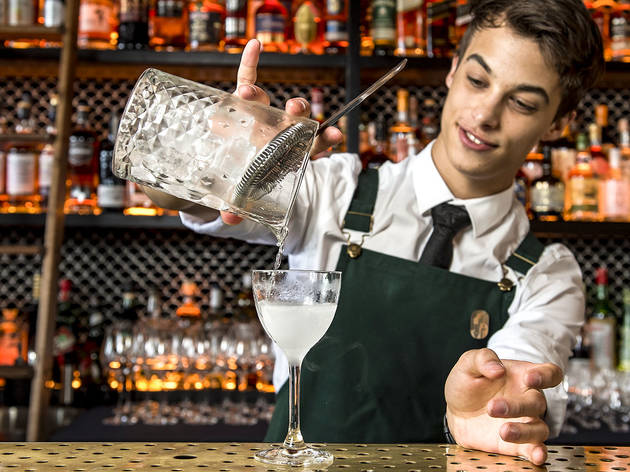 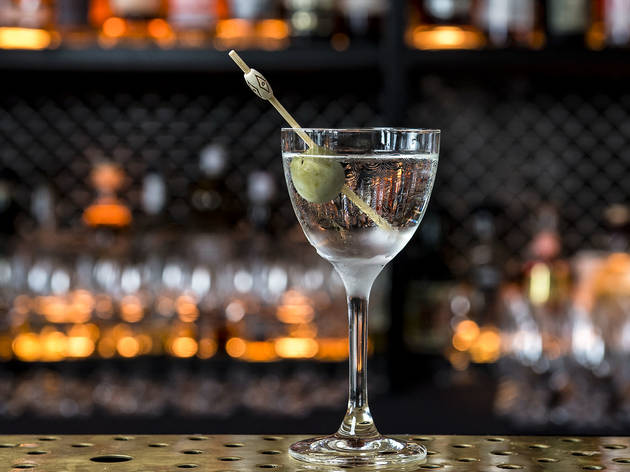 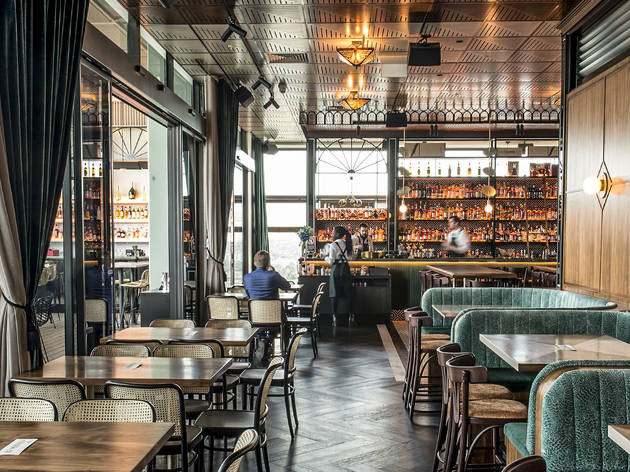 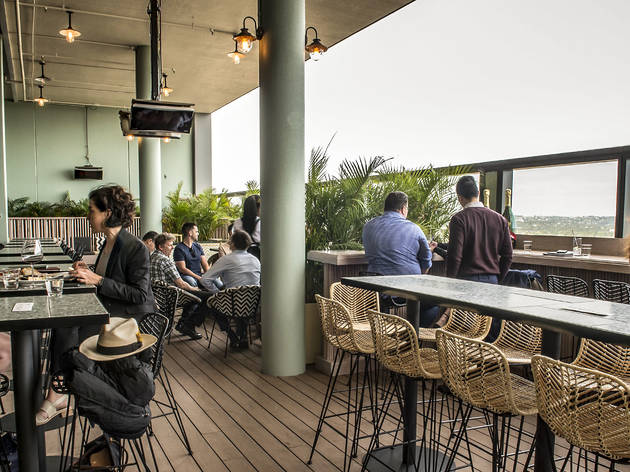 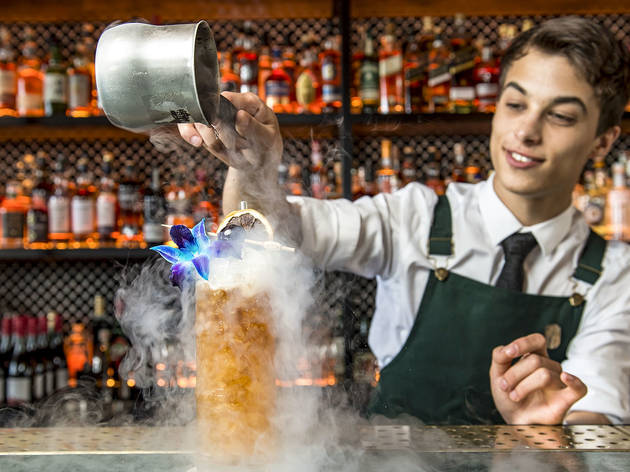 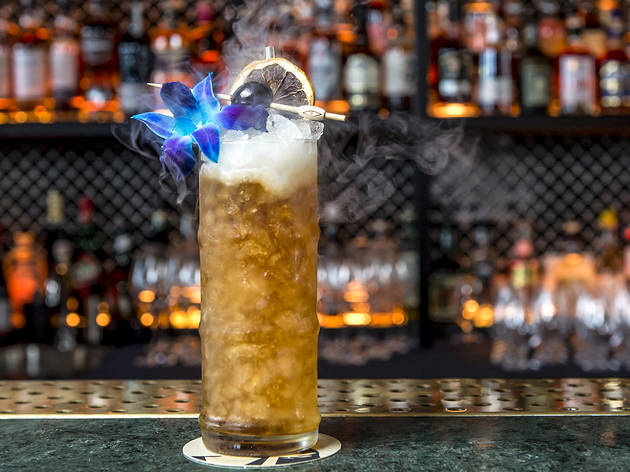 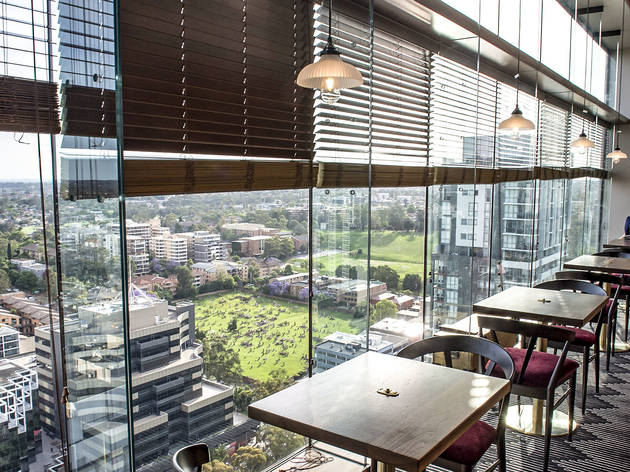 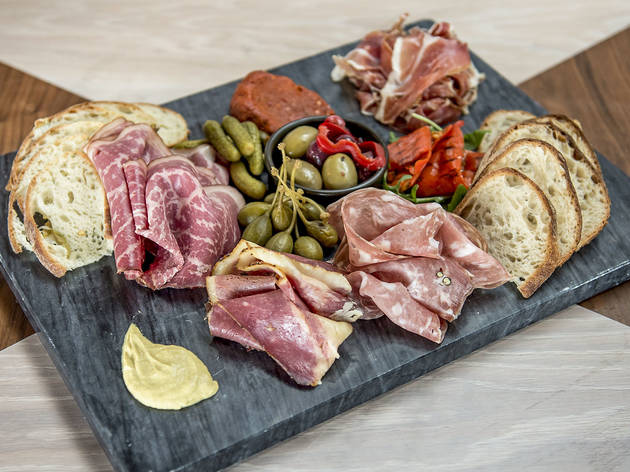 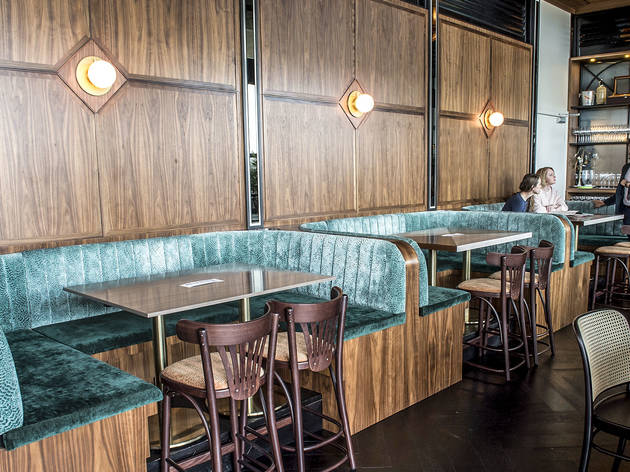 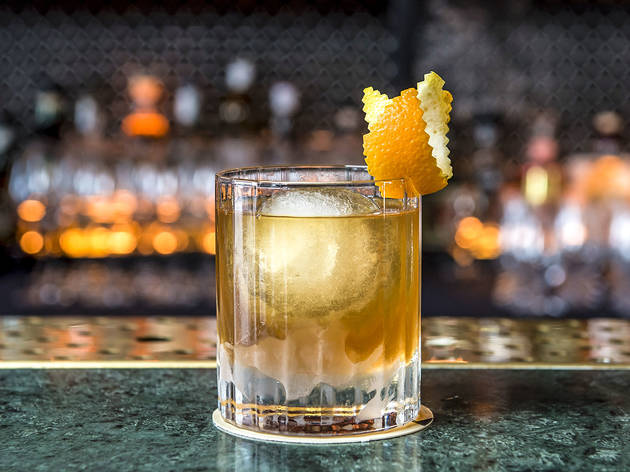 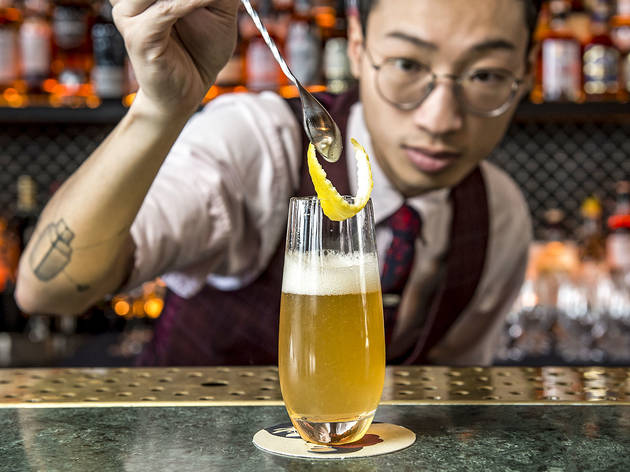 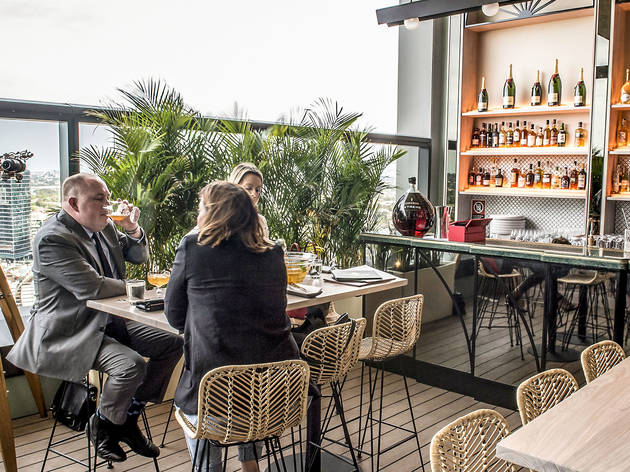 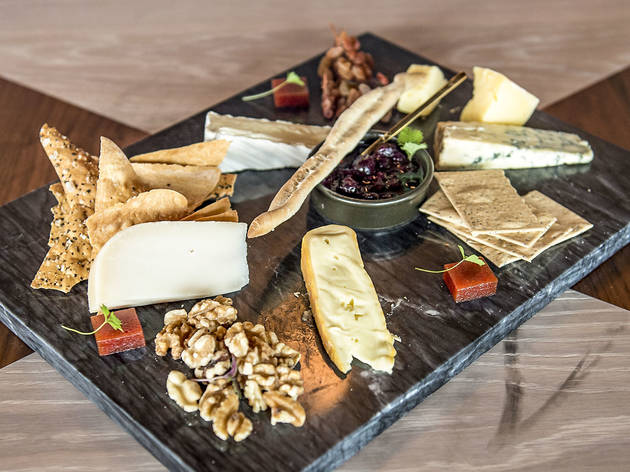 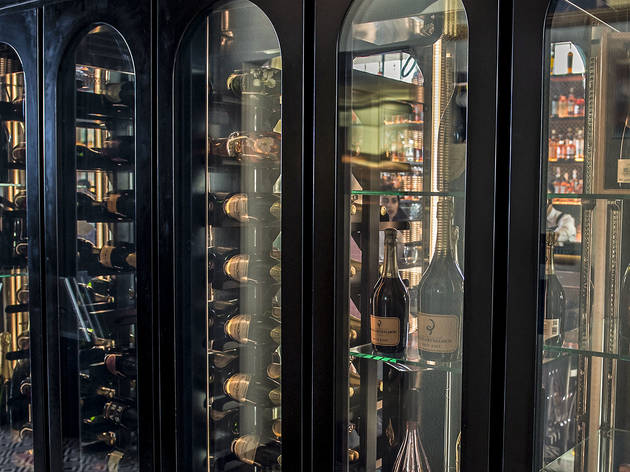 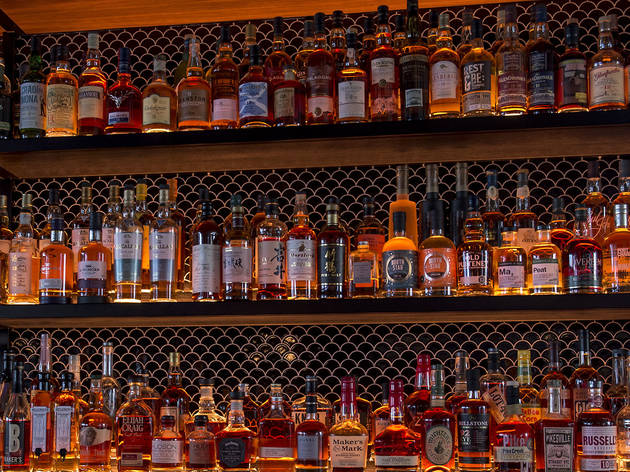 All it took for Parramatta’s bar scene to go from burgeoning to baller was 270-degree views that stretch from the Blue Mountains on one side to a teeny tiny Harbour Bridge on the other horizon. The first Western Sydney enterprise from the Speakeasy Group (Eau De Vie, Mjolner) is a stunner. You need to seek it out on the 26th floor of the shiny new V by Crown building, which houses Skye Hotel Suites, as well as schmick apartments. This context is important, because Nick and Nora’s gives off swanky hotel bar vibes – which is good and proper, given it functions as one.

It makes all the luxury finishes make more sense, like the demijohn of rare cognac on the outdoor bar, the liquid nitrogen tap installed in the garnish table, and the humidor full of cigars you can smoke out on the devoted smokers’ balcony. Don’t worry, the non-smokers get a bigger one, complete with a brass telescope for checking out the moonrise. Plus there’s a third vantage point behind the main bar in a kind of glassed-in galley. There are views to spare at Nick and Noras.

The team did not shy away from the old world glamour that you expect from a bar named after the boozy detectives in a 1934 black-and-white movie, and as you’d expect, bartenders mix a mean Martini here, too. The Dirty Martini, with its briny olive juice, has met its match in the Asta, a sharp, savoury uptown mix in a liquid nitrogen-cooled Nick and Nora glass (naturally). The Texan vodka is infused with straw for a kind of sweet herbalness, the launch pad for dry vermouth and pickled jalapeno juice, which blows the humble olive out of the water on flavour and intrigue. This is the drink we keep thinking about.

If the question is dessert or another drink, knock them both off with the Old Fashioned that riches up the mouthfeel of Ron Zacapa with burnt butter, then adds madeira and chocolate bitters before pulling a surprise turn with Benedictine’s menthol freshness.

Yes, you can eat here, but a slightly weird canapé menu yields lacklustre results with pork three ways, but much the same in flavour. Charcuterie and 14 different cheeses is a more satisfying way to fill the gaps before you attempt the whisky menu that’s longer than Santa’s naughty list. At the end of page one you’re only up to B in the alphabet, and there are 11 more A4 pages to go from there.

Nick and Nora's is not somewhere you go for a quick pint after work. It’s channeling the old world glamour of famous hotel bars like London’s Savoy and Singapore’s Atlas. In a venue where a casual fascinator wouldn’t look out of place, it’s worth at least throwing on a smart jacket and leaning into the theme. You’ll feel like a million bucks, even if you only have the $22 needed for that jalapeno Martini.