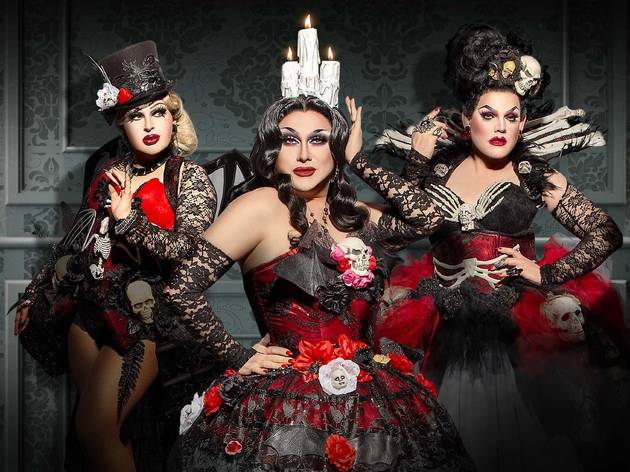 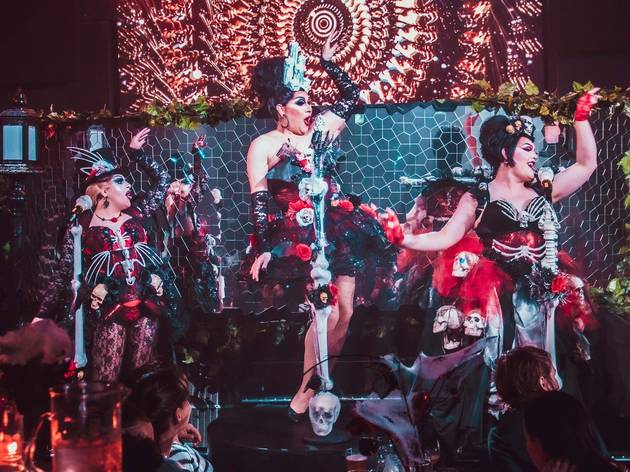 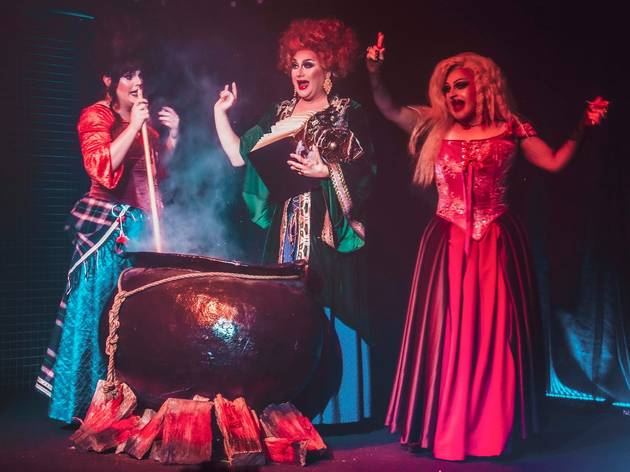 Brace yourself for an evening of campy horror drag queens

Get ready scream in terror and squeal with delight, because some of the biggest drag queens on Oxford Street are terrorising and tantalising unwitting diners with a new dinner show especially for the spooky season.

Hot on the stilettoed heels of their last Hollywood-themed show, the Premiere gang is going to the dark side with Scream Queens, a three-course freaky feast paired with drag delights inspired by classic horror films and performed by queen supremes Charisma Belle, Hannah Conda and Carmen Geddit.

The scene is set with ooky spooky decor that transforms the Universal nightclub into a haunted house (brace for the odd jump scare), horror montages are projected across screens, and the staff are kitted out in masks (for both costumey and public safety purposes). Even the dishes are dressed with piercing details like teeth and eyeballs.

The previous iteration of Premiere was impressively pulled together in just over a week, as soon as venues were given the green light to welcome guests back, post lockdown. This next production has been created at a more reasonable pace, giving the team more time to perfect their freaky follow up.

“The costumes are crazier, the choreography is crazier, and all of the numbers are longer,” said Charisma Belle, the main brains and beauty behind the operation. “It was really fun to think outside the box and think about how we make Halloween not just scary, but fun and suitable for all the age groups that are coming to see the show.”

Expect bewitching group numbers culminating in a show-stopping Hocus Pocus tribute, and haunting solo acts featuring a fan-dancing, ballroom swaying Morticia Addams and a gender-fuck take on David Bowie’s goblin king from The Labyrinth, performed in costumes and wigs that are as glamorous as they are ghoulish. Sure, the horror tropes are on the cheesy side, but if you're not down for some irreverent camp humour, what are you doing at a drag show anyway?

With more than two decades in the drag game, Charisma says that being able to put on a show like this is a dream come true. A dinner theatre production is something she’s tried to shop around in the past, but the format always been put in the ‘too hard’ basket by venues. Somewhat ironically, CovidSafe restrictions have now made dinner theatre one of the only permissible formats for certain venues.

Premiere is a marriage of convenience – it's a collaboration between Universal, Belloccio Restaurant, the queens, crew, promoters, as well as the local costume makers and wig stylists brought on board – but its also a formula that just works, and if you speak to anyone involved, it's a labour of love. (Read more about how it all got started here.)

The show is also a welcome experience for those who want to enjoy top-notch drag outside of a nightclub. When it comes to the union of drag and dinner, the Imperial Hotel in Erskineville is Sydney's main player. But Premiere gives the matriarchs of Oxford Street some skin in the game, and under the oscillating nightclub lights, they've created something entirely different than the vibe at the hallowed pub home of Priscilla across town.

“There’s a whole group of more mature people, people who have jobs and can’t be out until three or four o’clock in the morning are now getting back into drag and experiencing it in a much more comfortable way,” says Charisma. “I’m loving it as well. I like the audience watching from their tables, no one’s trying to get up on the stage and dance with you, which often happens in the clubs, and I’m not performing to a thousand mobile phones. It’s been very exciting to see people smiling and laughing with you.”

Scream Queens is on for a limited run on Friday and Saturday nights until November 7, doors open at 7.30pm for an 8pm start. Don’t linger, Halloween weekend is already sold out. Tickets start at $89 for the Dine Package (including three-course dinner, show and welcome drink) and $149 for the Premiere Package which comes with bottomless bubbles, cocktails and house wine. Book in here, if you dare.