The 21 best French restaurants in America

You've been through the best burgers in America. And the best pizza in America, too. (And, yes, we think you’ve probably downed a few tacos at the best Mexican restaurants in America as well.) Now it’s time to get fancy with French. But French stateside is a little different than it used to be. What’s the difference between your average upscale French restaurant and its New American counterpart today? Judging by their repertoires these days, the answer is not much other than “whatever the chef says it is”—which is fair enough. First, fine dining was and is built on the foundations of haute cuisine, perfected at fine French restaurants. Second, several decades ago, haute cuisine itself underwent a shift, bringing local ingredients and global influences to bear on classical technique. Whether preaching tradition or moving the conversation forward, these 21 restaurants speak with passion and authority to the idea that French cooking is our universal heritage. They are the best French restaurants in America, and you want to be eating in them. Follow Time Out USA on Facebook; sign up for the Time Out USA newsletter 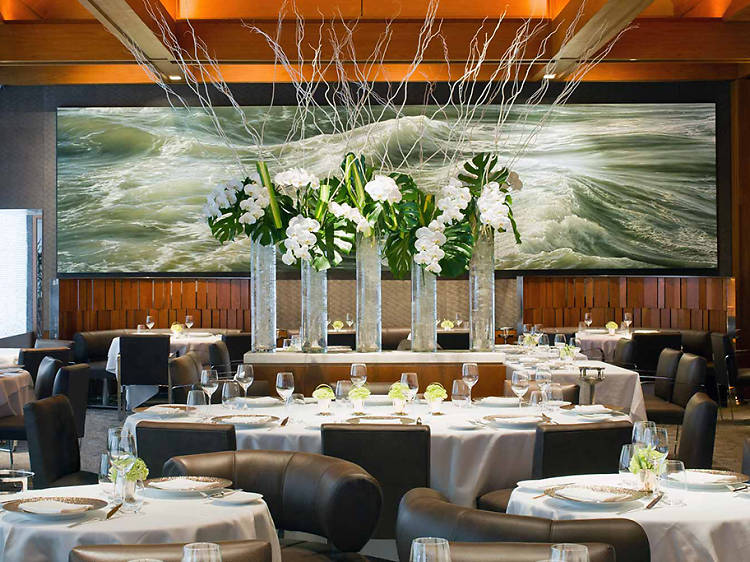 New York dining mores have experienced a seismic paradigm shift in the past decade, toppling Old World restaurant titans and making conquering heroes of chefs that champion accessible food served in casual environments. But Le Bernardin—the city’s original temple of haute French seafood—survived the shake-up unscathed. Siblings Gilbert and Maguy Le Coze brought their Parisian eatery to Gotham in 1986, and the restaurant has maintained its reputation in the decades since. Le Bernardin is still a formal place, with white tablecloths, decorous service and a jackets-required policy in the main dining room. But a recent overhaul modernized the room with leather banquettes and a 24-foot mural of a tempestuous sea by Brooklyn artist Ran Ortner. Guests who find the $190 tasting menu or $120 four-course prix fixe out of reach can still experience the kitchen’s finesse in the lounge area, via stunning bar snacks. 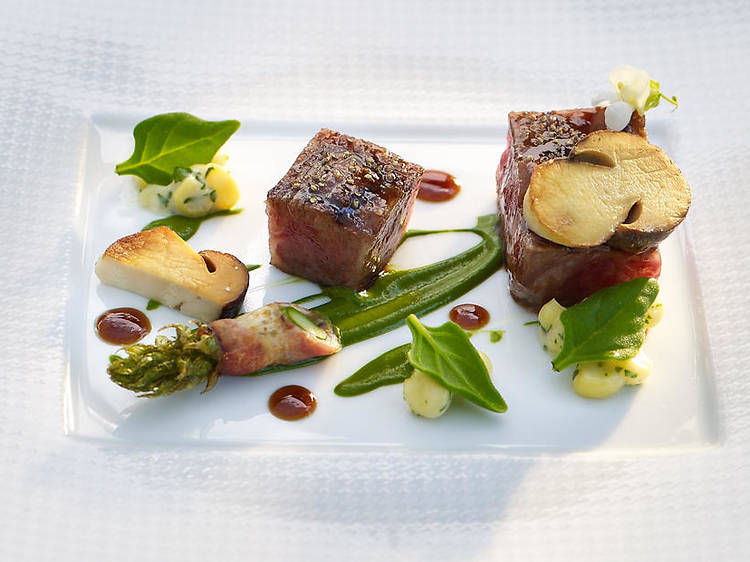 Since 1994, the old stone cottage deep in wine country that houses the French Laundry has stood among the holiest of holy grails—not only for destination diners, but for aspiring industry pros around the world. Thomas Keller’s influence is inestimable; without him, there’d be no Noma, Alinea, Benu or Frasca Food and Wine, to name just a few whose elaborate prix-fixe tasting menus bear testament to his mentorship. Signatures, like his legendary “oysters and pearls,” are copied endlessly. Of course, if you’re lucky enough to have had Keller’s original amid a grand procession of dishes that celebrate the rarified and earthy alike—be it grilled veal tongue with peaches and cornichon relish or earshell clam tartare in finger-lime aigre-doux—you know that he’s set the standard for immaculate service as well. Yes, you’ll be astutely aware of what you paid for the privilege, right down to the last cigar-paired glass of rare Cognac. But it’s a rare grouch who doesn’t walk away feeling like every penny went to a once-in-a-lifetime cause.
Read more
Advertising 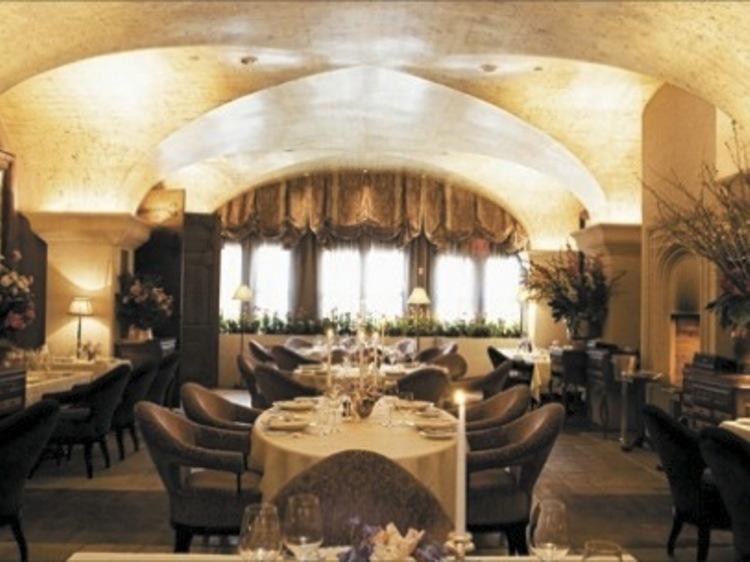 The eponymous Bouley—the airy flagship of David Bouley’s growing empire—exists in its own fantastical bubble: a place where the Dow still surges and expense-account spending never dried up. The original Bouley, once one of the city's great haute cuisine destinations, had over the years become increasingly marginal—the chef's dated devotion to an opulent late-’80s aesthetic is as unwavering today as it was when the restaurant first opened 29 years ago. The newer locale is a tricked-out version of the old one. The aromatic apples that greeted diners as they walked through the door are still at the entrance—but now there are more of them, a whole wall on wooden shelves. The vaulted ceilings have also returned—constructed from scratch and given an over-the-top coat of golden paint. 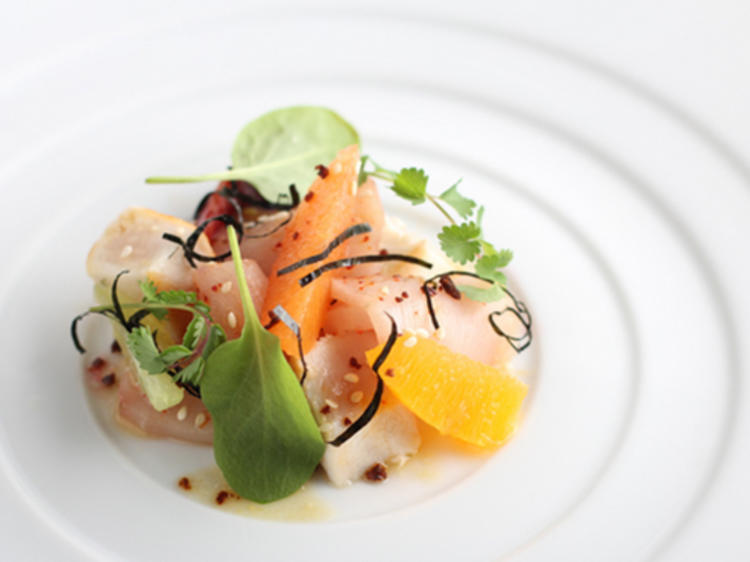 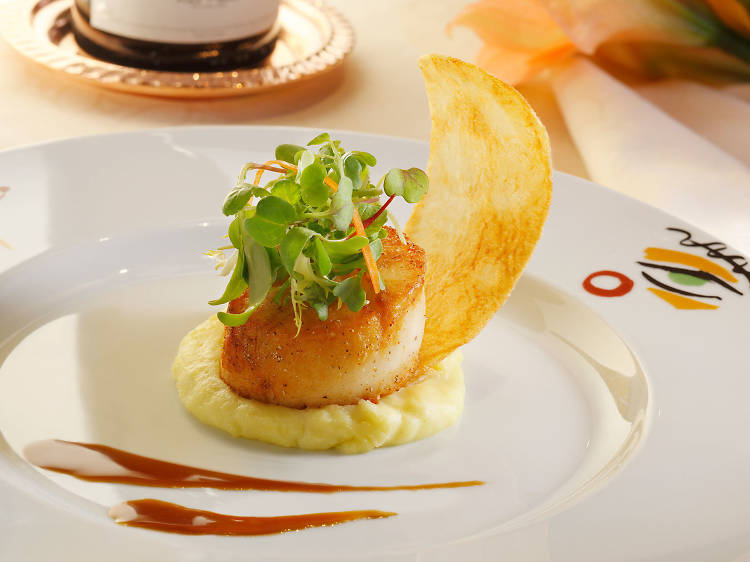 The namesake master was Spanish and so is executive chef Julian Serrano. Nevertheless, one of the most astonishing monuments to modern French cuisine in the country rests on their combined artistry. As you’d expect from a VIP destination in the Bellagio, the setting is palatial from the jaw-dropping 11 framed Picasso canvases dotting the walls to the view of the fountains beyond the lavishly draped windows. The seasonally changing multicourse menus are equally extravagant with caviar, truffles and signatures like the medallions of fallow deer in green apple-Zinfandel sauce. And of course—speaking of wine—the cellar is superlative, with an emphasis on world-class French reds as well as the crème de la crème of Spain and a crackerjack floor staff, led by Master Sommelier Robert Smith, to walk you through it. 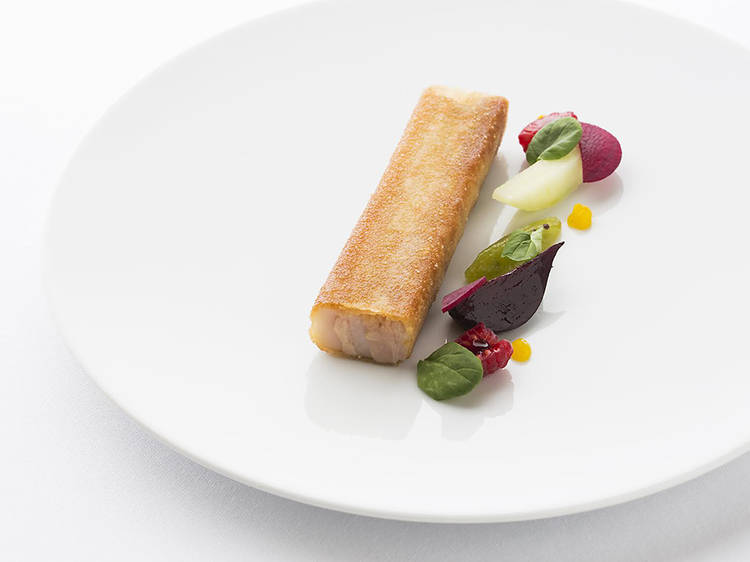 Named for the architect who inspired the magnificent Mediterranean Revival resort that houses it, Addison represents the ne plus ultra of destination dining. Sumptuous fabrics and jewel hues, marblework, glowing views of the Grand Del Mar grounds and the canyons beyond: it all sets the stage for the royal treatment you’ll receive throughout your personalized 12-course tasting, from chef William Bradley’s first amuse bouche to the parting gift bag of cookies, from bouillabaisse and sweetbreads with porcini marmalade to turbot à la grenobloise and coconut-passionfruit parfait—every last bite to be paired, of course, with champagne, German riesling, and grand cru Burgundy from the 3,000-bottle cellar. Or you could just stop by the lounge, Le Salon, for a quick drink and a bite. The same way you could go to Paris and eat nothing but burgers.
Read more
Advertising 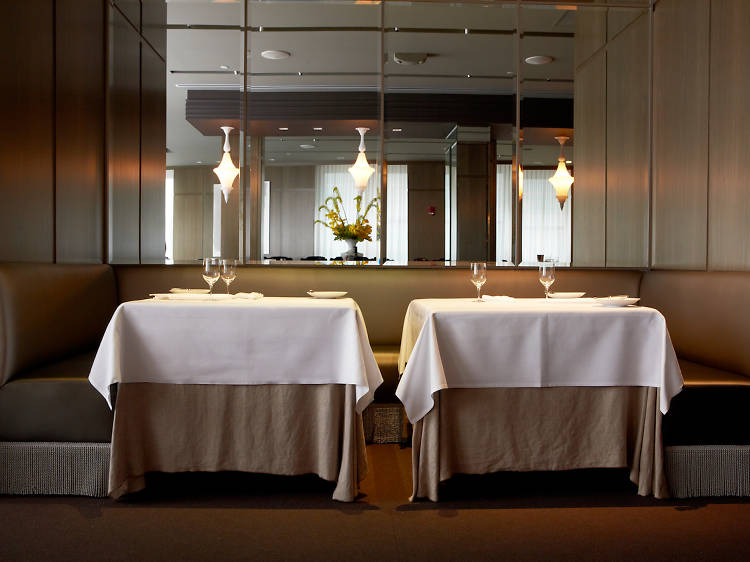 Menton the town is a gem of the French Riviera. Menton the restaurant is in Boston’s rather-less-glamorous Fort Point neighborhood. Yet given a choice between a night in either, we’d be hard-pressed to turn down the trip to Beantown. This exemplar of European refinement is where local-girl-done-remarkable Barbara Lynch proves she’s at the top of her game. (Or so we say, knowing full well we’ve said so before only to watch her surpass it.) At the heart of the Menton experience are two eight-course tasting menus, one composed of recurring favorites like the by-now-legendary butter soup, the other of seasonal creations such as sturgeon caviar-topped blini in cucumber velouté. Their presentation is as disarming on the plate as it is gracefully served by the ultra-professional staff—who are equally adept at explaining longtime Lynch cohort Cat Silirie’s wine program, a jaw-dropper for Old World aficionados. All that said, if you did nothing but belly up to the Gold Bar for the cult-worshipped foie gras dog and a cocktail to remind you that Lynch pioneered the local craft-bartending movement 20 years ago at her flagship No. 9 Park, you’d be making a trip to France’s worth of memories. 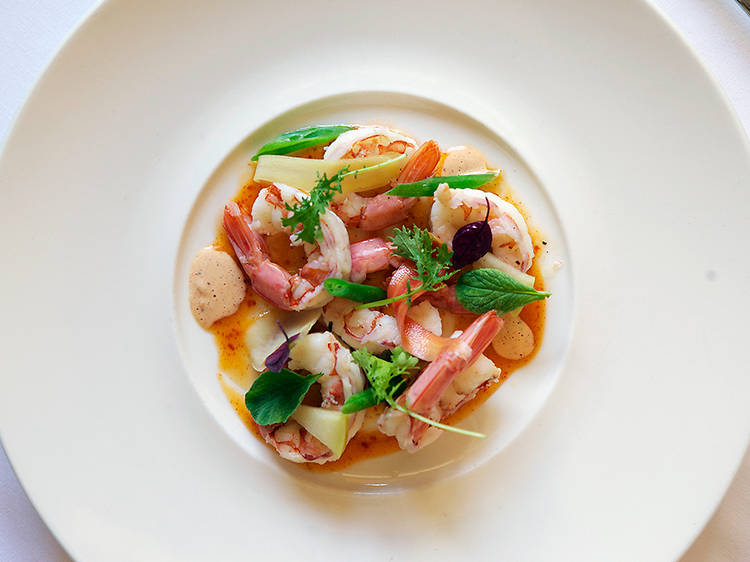 There may be no bolder, more commanding interpreter of the French legacy in New Orleans than visionary chef-restaurateur John Besh, whose own legacy begins with the aptly named August. Occupying a historic (and, some say, haunted) former tobacco warehouse in the Central Business District, his celebrated, elegantly appointed flagship stresses the Gallic accent on Louisiana Creole cookery—and vice-versa—with a regularly changing menu that ranges from smoked local redfish rillettes to Sauternes-poached pear with fried cornmeal pudding (though the blue crab-and-black truffle gnocchi has graced the menu since opening day back in 2001). The superb wine list displays its own brand of Creole as a mixture of Old and New World bottles, but Burgundy’s a (very) strong suit.
Read more
Advertising 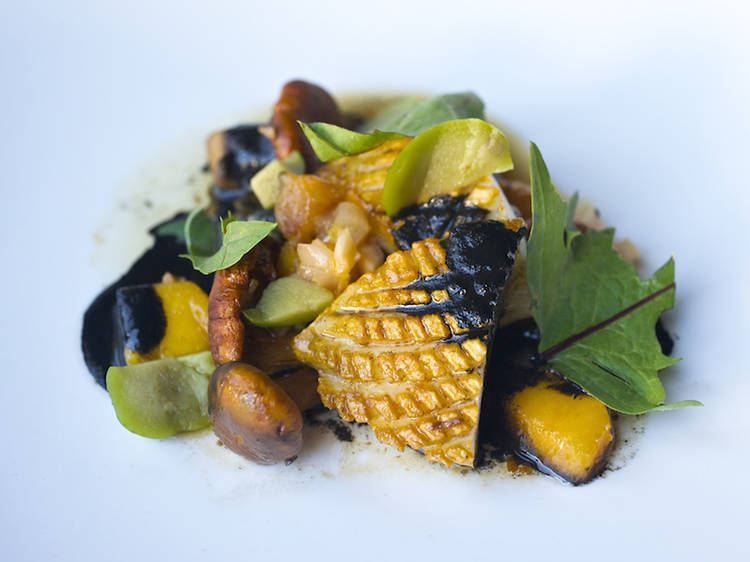 Tiny though it may be, Le Pigeon isn’t easy to le pigeonhole, and that’s just the way chef-owner Gabriel Rucker likes it. Even to say that his menu rests on an unmistakably French foundation is a bit misleading, because it hardly rests at all; it’s forever taking flights of fancy in the form of rabbit-cheddar pie with mustard ice cream and smoked-mackerel spaghetti in clam butter one day, a foie gras hot brown or chicken-fried foie with biscuits and duck-sausage gravy the next (“we’re a multi-foie restaurant,” Rucker explains). The beverage list follows suit. By all means pair buffalo sweetbreads with Coors Banquet and the signature boeuf bourguignon with second-growth Bordeaux or vice-versa. Such eclecticism is reflected in the diversity of the clientele: in the much-sought-after seats along the chef’s counter, says Rucker, “You can have someone enjoying a tailored seven-course tasting next to someone who’s eating a burger and drinking cheap beer. Both will receive the exact same service.” Talk about le meilleur des deux mondes.
Read more 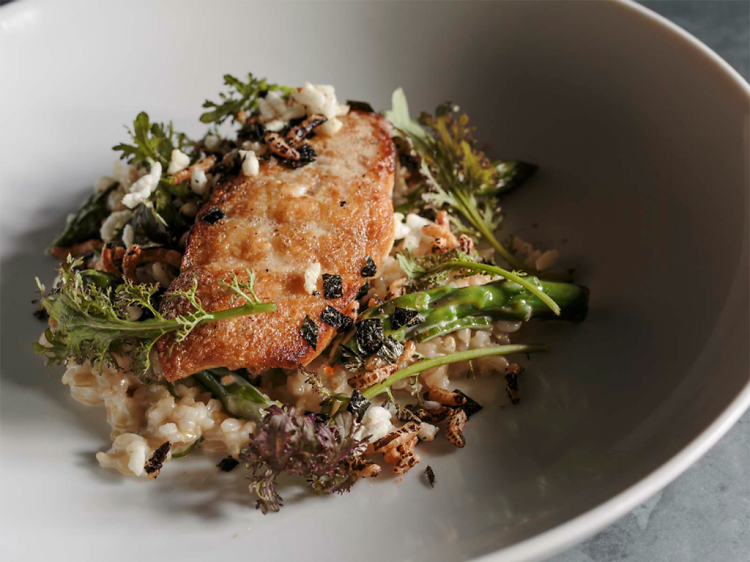 This beautiful, whimsically designed restaurant (it’s meant to resemble an overturned champagne glass) is one of the best high-dollar special-occasion establishments in the city. Located a short walk from Davies Symphony Hall and the Opera House, Jardinière delivers a menu as opulent as the decor. Chef Traci Des Jardins continues to seek out the best local ingredients for a menu that features caviar, oysters, black truffles, duck breast confit, diver scallops and bacon-wrapped rabbit. For an extra-special occasion, spring for the prix-fixe menu with wine pairings—and the cheese course. The wine list includes an extensive selection of champagne and sparkling wines.
Read more
Book online
Show more 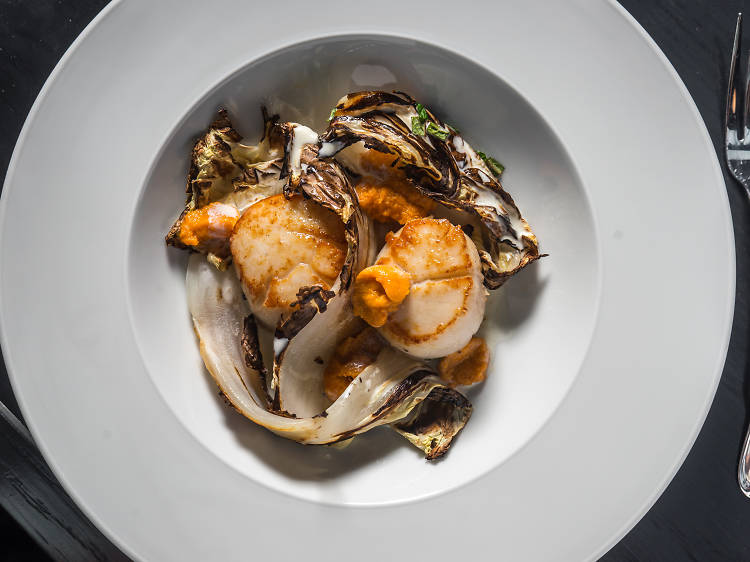 The best French restaurants in NYC

From Midtown brasseries to charming Soho bistros, meet the best French restaurants NYC has to offer 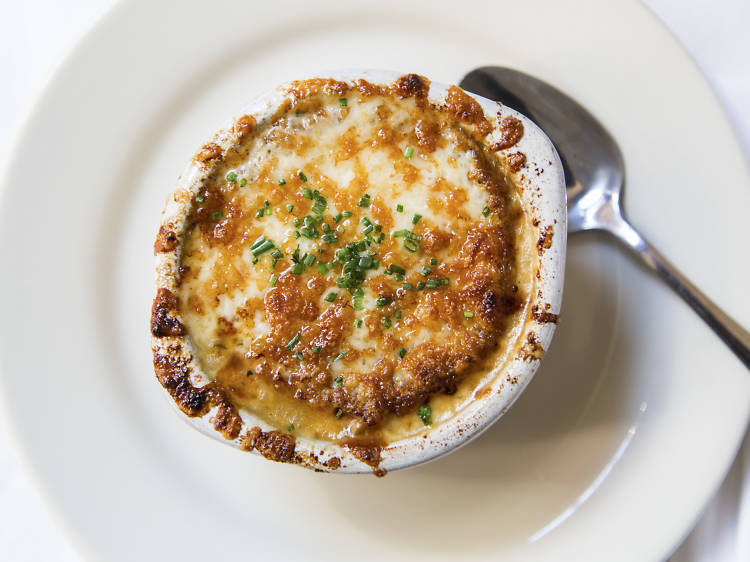 The best French restaurants in Chicago

You'll find sweet stuff as well as wonderful versions of cassoulet, steak frites and more in the Windy City 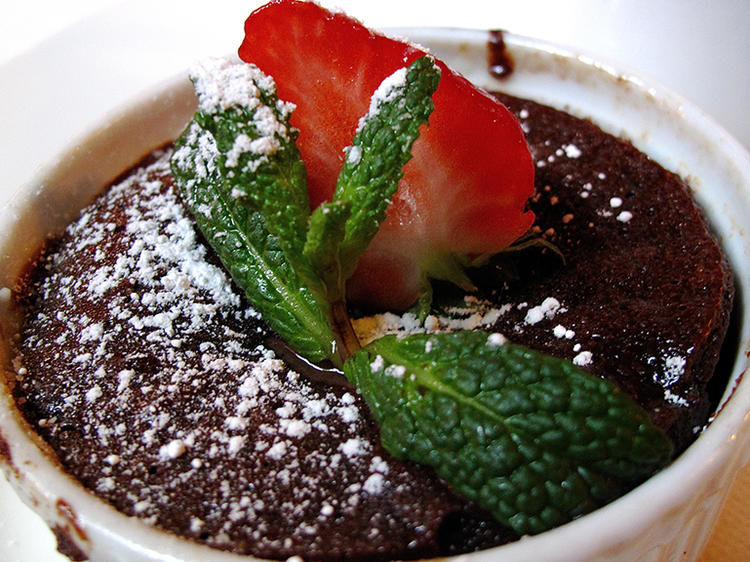 From classic Parisian-style cafés to temples of gastronomy, we round up the best French restaurants in SF 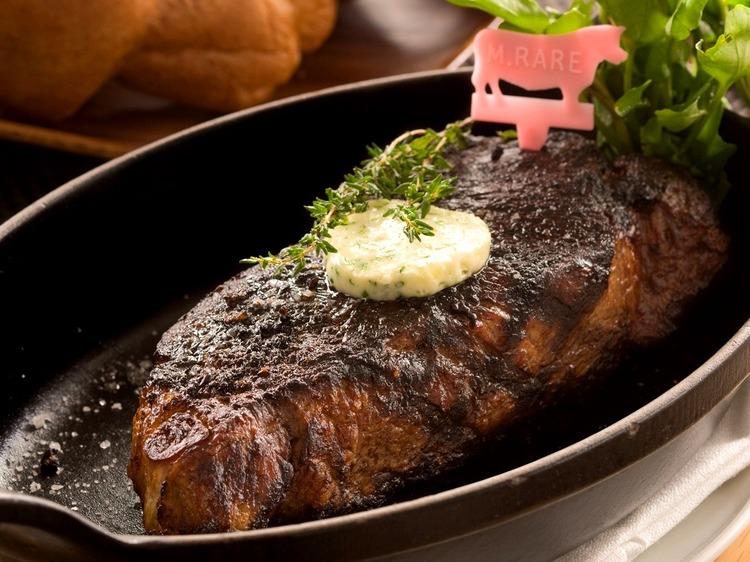 The best French restaurants in Miami

From classics to new spins on old favorites, haute cuisine is flying high in Vegas 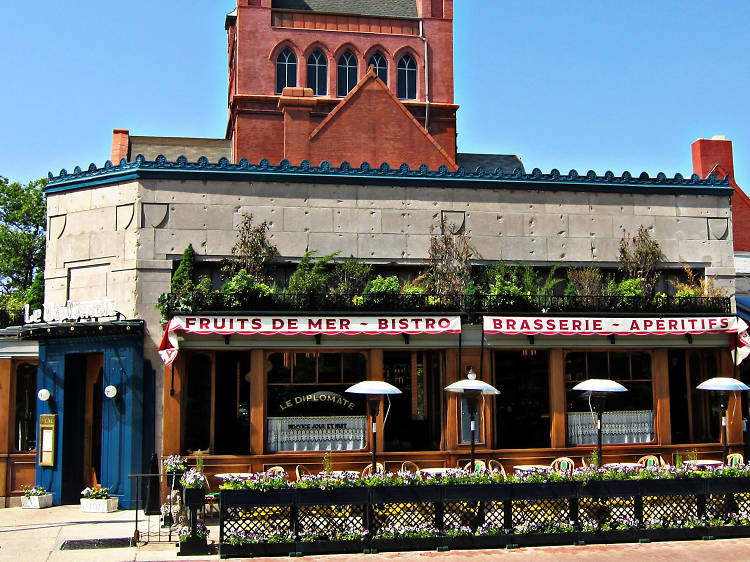 The top-tier D.C. restaurants serving everything from authentic classics to Gallic-accented American cuisine