Chicago has long been known for its piled-high hot dogs and messy Italian beefs, but that doesn't mean that we don't eat our veggies. For decades, vegetarian- and vegan-friendly restaurants have thrived in this city. And over the last five years or so, a new wave of vegetable-forward restaurants have opened as a happy middle ground for everyone to enjoy. Whether you're on the hunt for a vegan milkshake, tofu wings or a salad filled with goodies from nearby farms, there's a restaurant on this list for you. And FYI: You don't have to be a vegetarian to go meat-free at these excellent eateries. 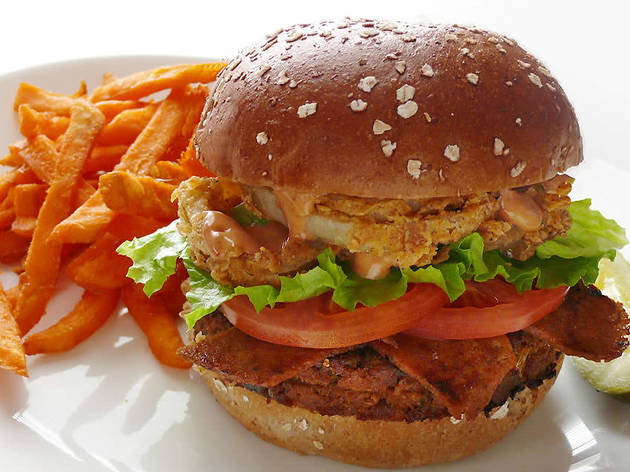 Even non-vegetarians know Chicago Diner. The vibe is normal, everyday diner, albeit with soy whip, tofu and tempeh on the giant menu. Waits for weekend brunch can get painful (even though the menu is served daily), but patient non-meat-eaters are rewarded with flaky soy margarine biscuits. Of the non-brunch options, the tofu and veggie-packed soul bowl is a healthy pick, and if you still have room, try the vegan caramel crunch torte or the thick, perfect milkshakes for dessert. 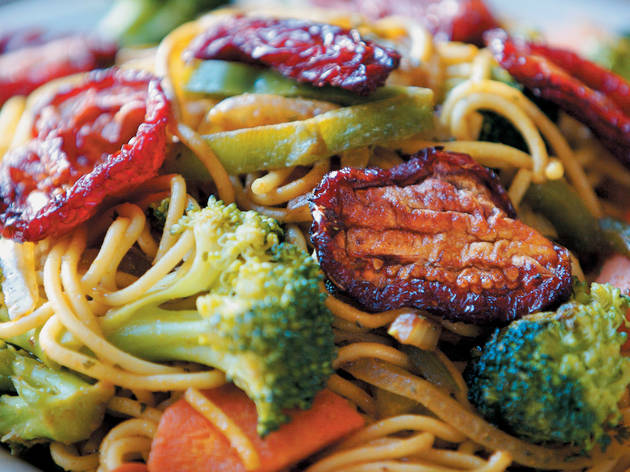 Located in Chatham, Original Soul Vegetarian has been "serving food as medicine" to Chicagoans for more than 30 years. In a family atmosphere for vegans looking to escape boring lentil hell, the “BBQ Twist” platter is as close to real barbecue pulled pork as vegetarians will get, and somehow the fried cauliflower tastes like chicken. If you have the time, sit for the full Sunday Supper: salad with tangy house dressing, fake-chicken pot pie, collard greens, corn and potatoes. The vegan apple or peach pie that follows may not be healthy, but that was never the point of soul food. 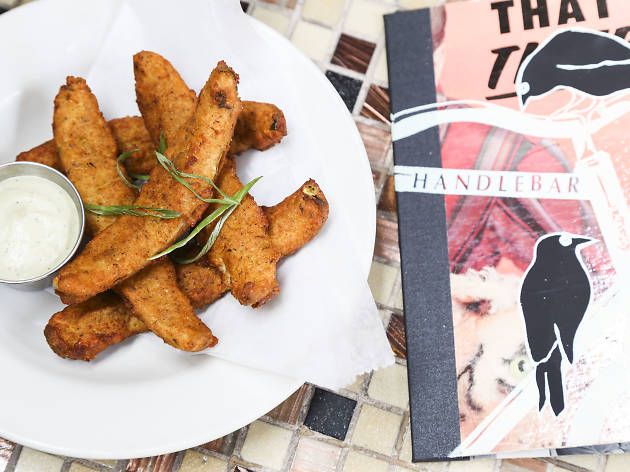 The multiple bike racks out back are packed with every kind of two-wheeler imaginable, no matter the time of year at this biker bar (and by biker, we mean bicycle-r). Eco-minded folks chat over tasty vegan fare like fried avocado tacos while checking out each other’s rides and sampling from the ample list of diverse drafts. Come summer, ask for a table on the sun-drenched, flower-filled back patio, a hidden gem in Wicker Park. 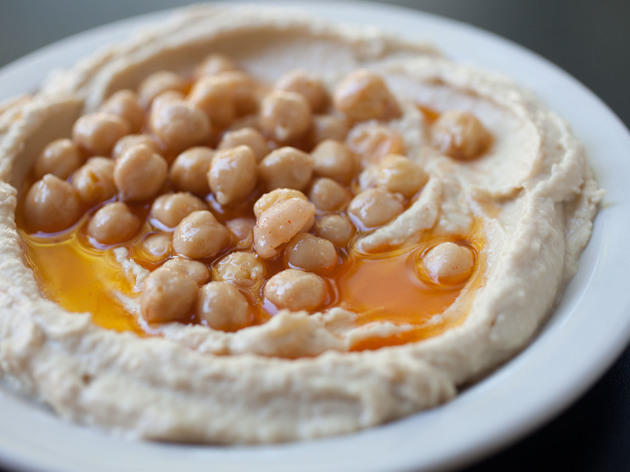 This vegan café in Lakeview focuses on foods made with its house-made seitan, a meat substitute crafted from wheat flour dough. Find the protein-rich gluten in menu favorites like the Philly cheesesteak or the Chickn Parm. There's also a decent selection of five burgers, with patties made from a medley of ground and roasted veggies plus soy protein and chickpea flour.

When we found out that Heisler Hospitality (Pub Royale, Queen Mary Tavern, Sportsman’s Club and others) was opening a vegetable-focused concept on Randolph Street, we were curious how Chicago would react. As it turns out, this meat-loving city has a thing for veggies, keeping Bad Hunter regularly packed most nights of the week. Though there's meat on the menu, we recommend skipping it entirely in favor of the seasonal hit list of appetizers and entrees. The butter dumplings, which are stuffed with whatever's sprouting up at the farmer's market, are a menu staple that shouldn't be missed. If you're craving faux meat, the Bad Hunter burger won't disappoint; the veggie patty is cradled in a brioche bun and topped with cheddar, tangy tomato jam, onion and mustard aioli. 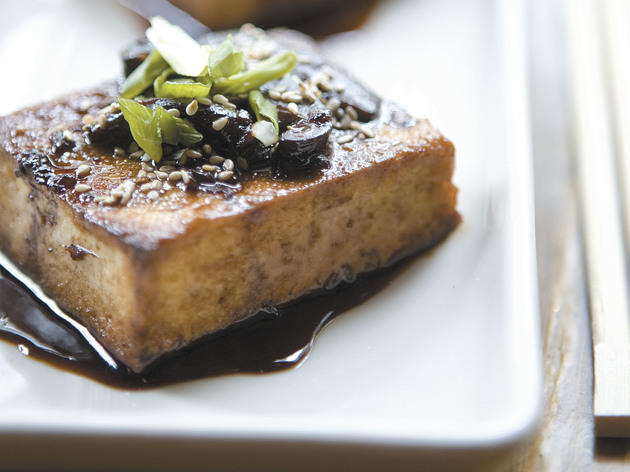 At this shoebox-size meatless mecca, global vegetarian fare is gobbled up by diners lounging on chunky wood stools and in dark booths under dim lights. Most dishes are available in small and large sizes, so even a party of two can sample plenty of dishes. Our favorites include the sesame noodles, bi mi bop and a fresh panzanella, and you'll probably see at least one brown rice-mushroom slider delivered to every single table. House-made ice creams make a great ending, unless you’re looking to drink dessert, in which case go for the cucumber Sakerita. 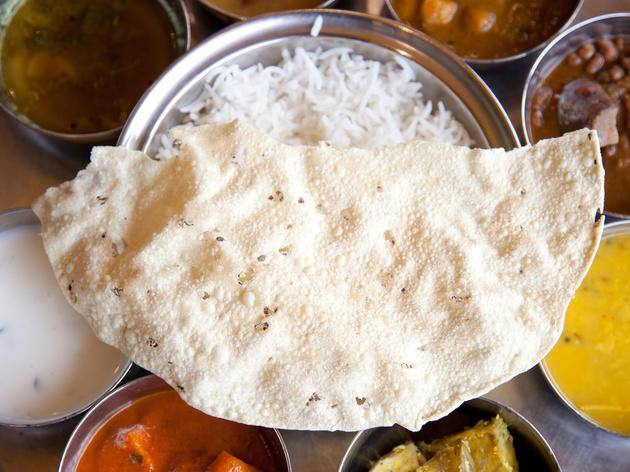 Come hungry to this South Indian vegetarian spot, where portion sizes are enormous. Start with rasam, a spicy cilantro-tamarind soup that’s hotter than a Bikram yoga session (a few bites of rasa vada—lentil doughnuts with an array of chutneys—temper the heat). Delicious breads—including poori (think fluffy and fried) and a fantastically crispy dosai—complement the coconut chutney and various curries of the Royal Thali sampler. 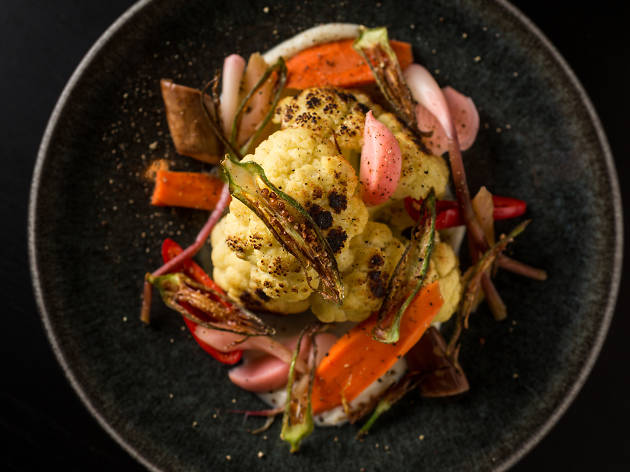 This relatively new Wicker Park restaurant offers a "veggie-centric" menu that's clearly marked with vegetarian, vegan, dairy-free and gluten-free options. Spring for a decadent spread or dip, like the mushroom and polenta terrine, before buckling down on the vegetables section. The curry-roasted cauliflower and broccoli gratin with butternut squash are particularly satisfying dishes. Dining with meat eaters? They'll delight in the non-vegetarian section, which boasts salmon, chicken, a burger and more. 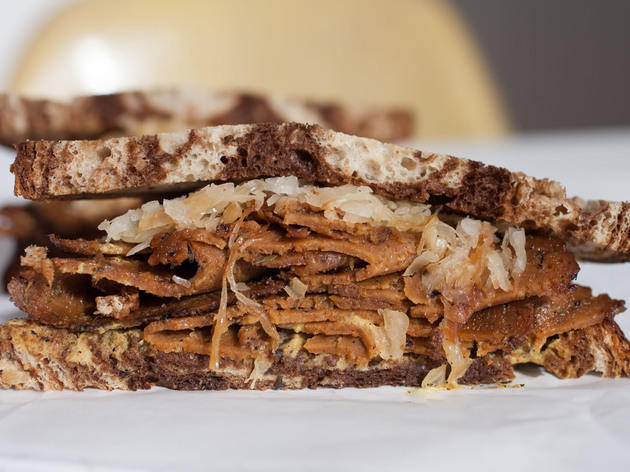 House-made seitan is the base for most menu items at Upton’s Breakroom, a bright little café attached to Upton’s Naturals, a company that makes seitan and sells it in stores across the country. The café has a small menu, including a bacon seitan cheeseburger, al pastor jackfruit tacos and a togarashi bowl with baked tofu. The employee meal, which is a rotating bowl of grains, greens and proteins, had a base of brown rice, a layer of raw kale, a generous helping of warm seitan chunks and a small container of bright-green nut pesto. There’s a great interplay of textures and flavors, and at $8 for a good-sized serving, it’s a satisfying lunch. 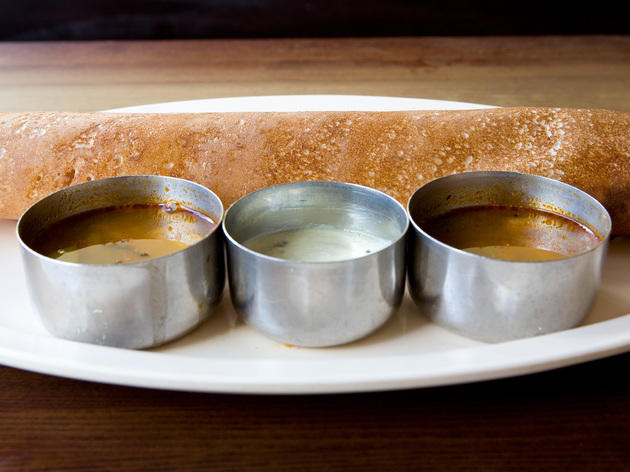 Carnivores seem to think that without meat on their plates they’d starve. But this 100 percent vegetarian South Indian spot puts an end to that theory with its famous dosa—a gigantic cumin-, potato- and onion-filled rice and lentil crêpe that comes in a dozen varieties. Other good bets include baingan bharta (a roasted eggplant rice dish) and the “Madras-style” okra curry that regulars swear by.