The busiest of the islands dotted around Kvarner, Rab has been a popular tourist destination ever since Edward VIII and Wallis Simpson brought the world’s press here to watch them frolic nakedly in its waters in the summer of ’36. In doing so, they pioneered naturism, unwittingly setting up Rab as its hub. Fewer niche reasons for the swarm of tourists in high season are historic Rab town itself, and the regimented beaches of Lopar. Wilder, more secluded beaches and verdant hinterland can be found elsewhere.

RECOMMENDED:  your essential guide to Rab.

Great things to do on Rab island 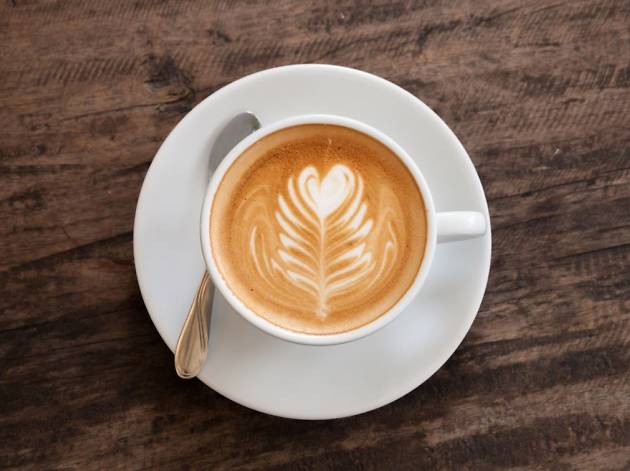 In the heart of historic Rab town, black-and-white views of which are framed and mounted around the interior, the Caffe Biser is the classic place to start the day. The coffee, of course, is top-notch, and there’s also a terrace garlanded with brightly coloured flowers where you can relax and peruse the daily papers also usefully provided. Many pass by during the day for the other stand-out feature of the café: its range of ice cream. Late opening also means you can enjoy a nightcap here after dinner. 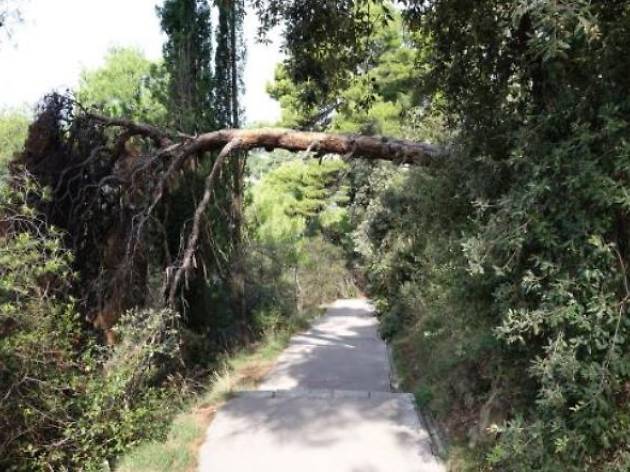 Ideally located alongside Rab’s Old Town, Komrčar Park provides that sought-after element in the height of a Kvarner summer: shade. It’s not only there for holidaymakers to enjoy – botanists will have a field day with all these Cypress trees, oaks and Aleppo pines. As the park backs onto the a long stretch of waterfront, you can combine a DIY alfresco lunch with a dip, or at least a splash, and if you fancy a bit of sightseeing, there’s a modest church and cemetery near Palit, the road that fringes the park to the north. The rest is winding paths, and hilly greenery, and it’s easy to find a secluded spot. 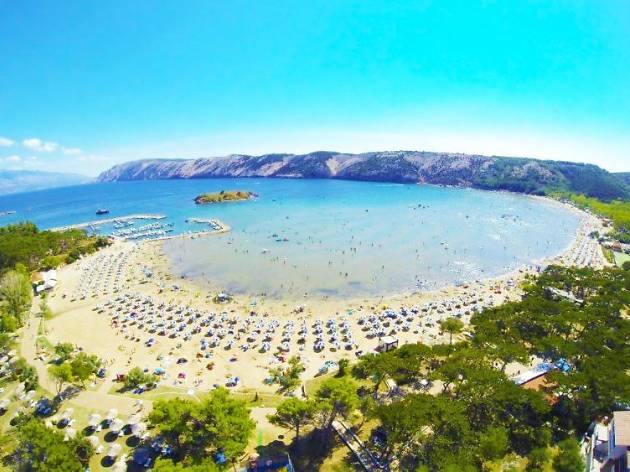 At the southern end of Lopar, facing the islet of Lukovac, sandy Rajska Plaža stretches for nearly two kilometres around a calm, shallow Adriatic. ‘Paradise Beach’ appeals to all ages, families gathering to paddle or picnic, teenagers getting into games of volleyball, older ones spending the afternoon taking advantage of the local winds to parasail and, in the evening, set up beach parties. Bars and eateries line the pine-shaded fringe, providing modest sustenance and relief from the sun. 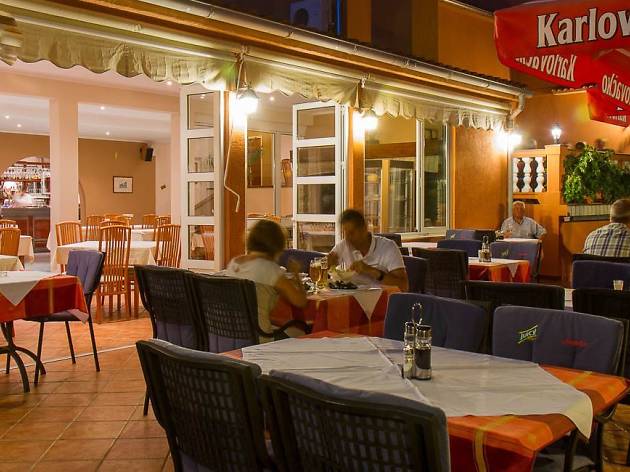 Complementing its excellent and affordable cuisine with a fine terrace view and modest but comfortable lodgings, ANA has been serving hefty portions of domestic favourites for four decades or more. The fish platter here is the stand-out but those with smaller appetites or dining alone can ask the friendly waitstaff to recommend the catch of the day – seafood comes with a side of traditional blitva, potatoes and Swiss chard. A zingy octopus salad might start the meal off, and this is the kind of restaurant that also ensures that pizzas are worthy of mention, rather than a family-friendly afterthought on the menu. 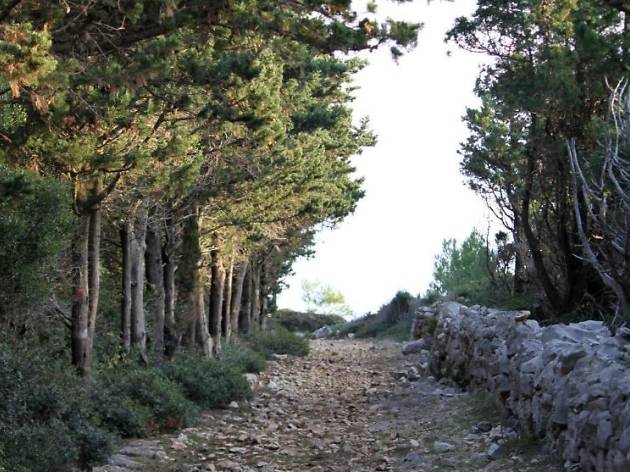 Part of the Kalifront peninsula that points its way north-west from Rab island towards Cres, Dundo is a botanical reserve created some 70 years ago. Here the holm oaks, a large, evergreen variety, date back centuries – there are others in the Mediterranean thought to be more than 500 years old. The trails cutting through the woods are easily followed, even for older hikers. Once you leave the nearest village, the relaxed, traditional community of Kampor, you’re pretty much on your own, so pack plenty of water and snacks. 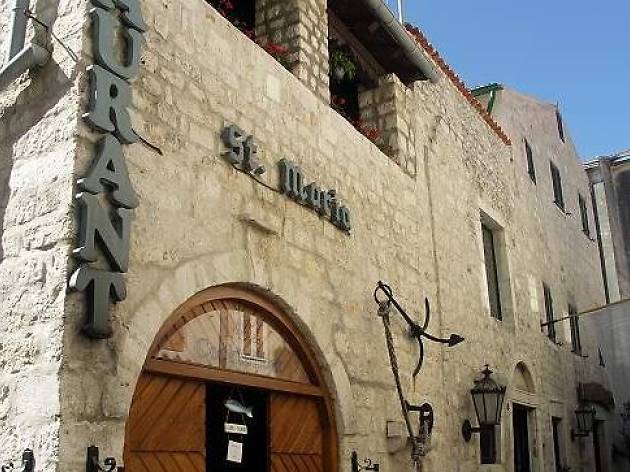 A short detour from Rab’s main square, the Santa Maria is set in a stately mansion dating back to the early 1800s. Diners tuck into thick steaks and grilled seafood surrounded by historic stone walls, some having reserved tables facing out to sea and Rab harbour. The location, atmosphere and quality of fare make Santa Maria a notch pricier than elsewhere around Rab’s Old Town, but it’s a memorable meal on an island where gastronomy isn’t always a high point. 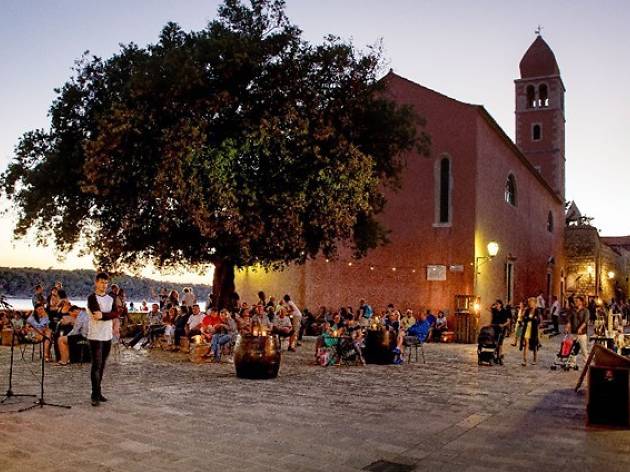 One of Rab town’s many historic churches, St Justine, is where you’ll find the Museum of Sacred Art. Here the main attraction is kept inside a gold-encrusted reliquary dating back the best part of 1,000 years. The skull of St Christopher is said to be contained within, a rather gruesome thought considering the patron saint of travelers was beheaded around AD250. How this object then came to arrive in Croatia all the way from southern Anatolia isn’t quite certain – Rab legend has it that a bishop brought it here when the town was under siege in 1075 and the invaders were duly warded off. More easily admired is the display of medieval robes and manuscripts, and painted panels by Veneziano of St Mark’s fame dating back to the 1300s. 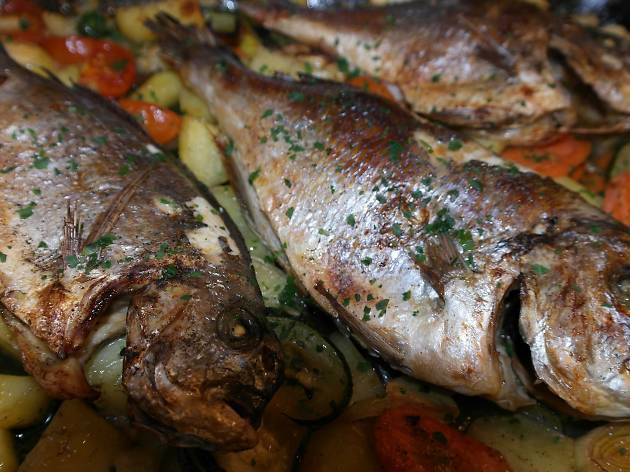 Opened as a restaurant way back in 1971, the Gostionica Feral near Lopar’s ferry port at the very north of Rab island is very much a family-run operation. It’s also one of those rare occasions you come across in Croatian tourism when no-one speaks English, or Italian – here, it’s a case of point and order, or let the family take care of you. Which is no bad thing, because what you’ll be served is fresh fish, fish stew, lobster, spit-roasted pork or slow-baked octopus – stand-out dishes all. 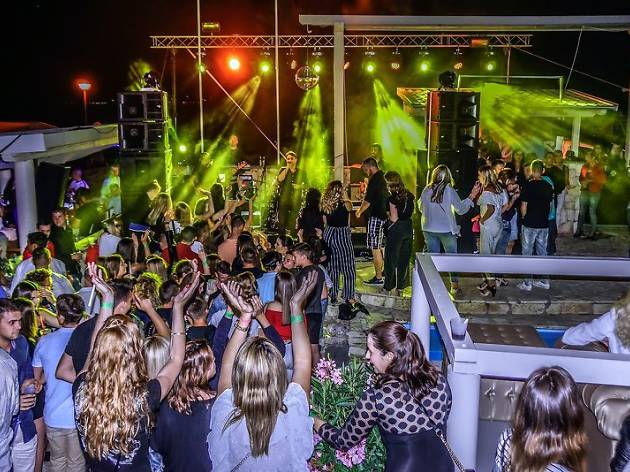 Close enough to Rab town and popular enough to warrant hourly shuttle buses in high season, Pudarica and its long-established Santos Beach Club are the long-established destinations of choice for anyone looking to let loose after hours on Rab island. Opening for the season with a big night in mid-June, Santos runs through until early September with mainstream domestic party DJs and themed nights, Brazil, retro, and so on. All takes place outdoors, allowing hundreds of partygoers to get down on the pebble beach, while a thatched lounge provides a little intimacy when needed. Taking a few tips from nearby Pag, Santos doubles up as a chill-out zone by day, with a pool and beach volleyball. 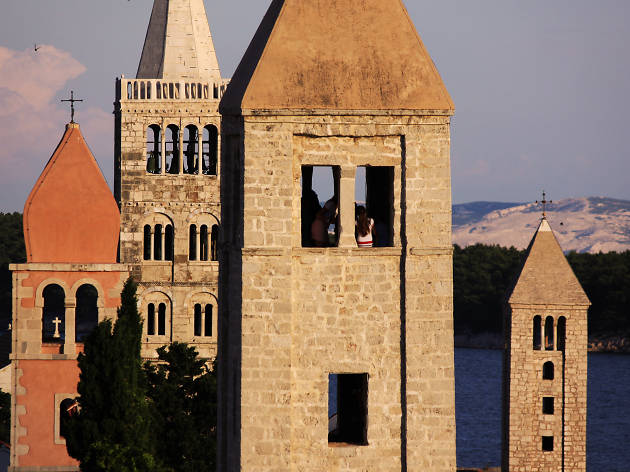 Halfway between two of Rab town’s most notable churches, St Andrew’s and St Mary’s, the Great Bell Tower has gazed out over the Adriatic for 900 years. Veli Zvonik to locals, it stands alone, a symbol of Rab’s early medieval heritage and a regular feature of any photograph taken by first-time visitors as they come into Rab’s nearby ferry terminal. Rising high for 25 metres, it displays the simple architecture of the pre-Gothic age but, most of all, can be climbed for tremendous views of Rab and all the sea around it. 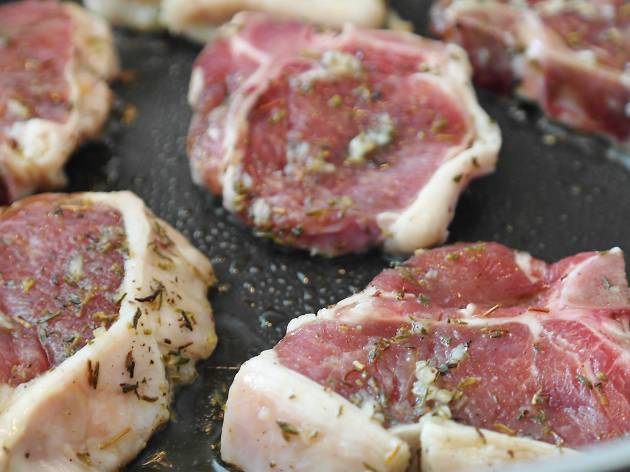 The classic dish at the equally classic Konoba Rab is janjetina pod pekom, lamb slow-braised in its own juices thanks to the traditional cooking method of placing piping hot ashes over a dome-shaped lid and leaving the contents to simmer. In the case of lamb, you’re already dealing with a particularly fine variety for which Kvarner is well known. Other specialities at this bare-brick and dark-wood tavern in the centre of Rab town are dried octopus, steak with mushrooms, monkfish and squid. For dessert, don’t miss out on the Rab cake, a sugar-coated pastry of almonds and Maraschino liqueur and a mainstay of every local grandmother’s culinary repertoire. 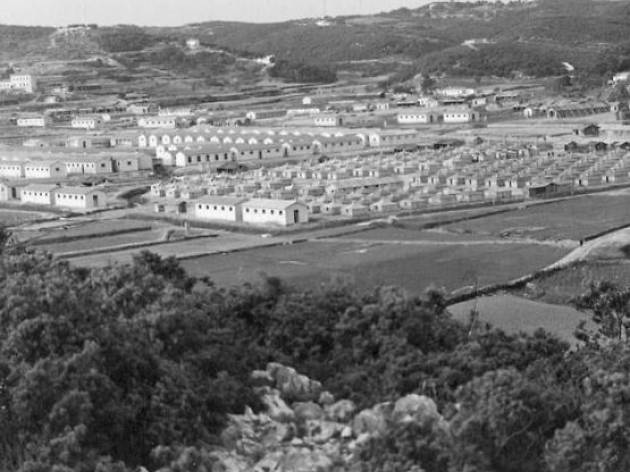 Just outside Kampor in the north-west corner of Rab island, a concentration camp set up by Italian occupying forces held up to 15,000 Croat and Slovene citizens in appalling circumstances for 15 months of World War II. After armistice with Italy in September 1943, the camp was shut down, although many detainees were then extradited to Germany. The site has since been turned into a tasteful memorial, the graves running in straight lines in tranquil greenery. 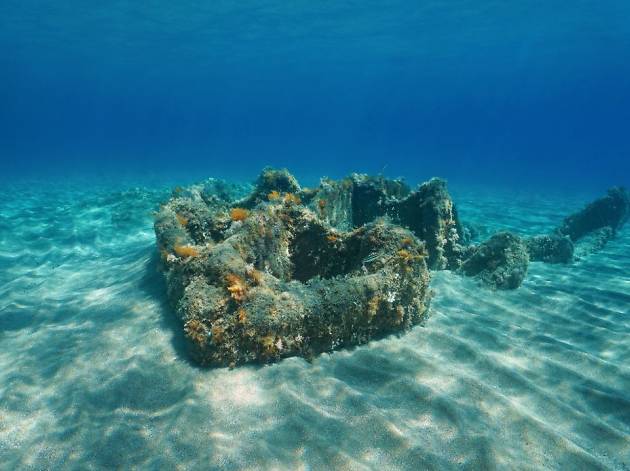 From its base at Kampor, Kron Diving has been offering beginners and initiates courses to suit all ages and abilities. One of the most exhilarating adventures for those with a little more experience is learning how to freedive. Gliding through the water without the aid, or encumbrance, of an oxygen tank, freediving allows you to move like a fish while observing all the sea life around you. Other tuition includes scuba diving, wreck diving and underwater digital photography. 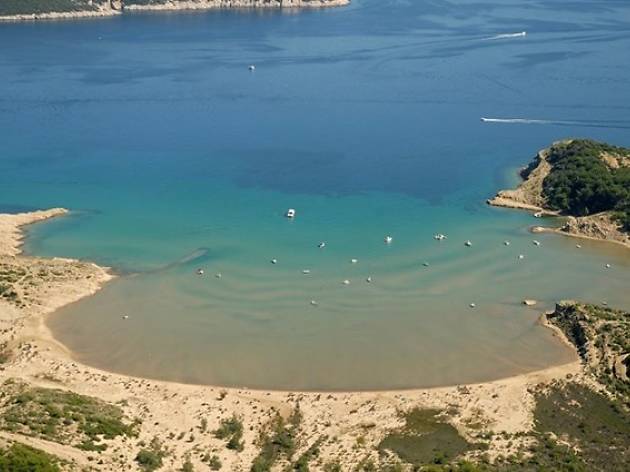 If Rab island is known for one thing, it’s naturism. Famously instigated by Edward VIII and Wallis Simpson in the 1930s, relaxing au naturel has always been popular here. Years later, FKK camps were set up, appealing to a mainly Central European clientele. Kandarola beach, where the world’s press gathered to snap the controversial couple swimming freely in 1936, remains a naturist haunt but Sahara beach, north of Lopar, is more remote and rugged. Sandy, and so kind on the feet, Sahara comprises a beautiful crescent-shaped shore, clear waters and few crowds. Here there are several smaller beaches in the same vicinity, some for those who prefer bathing costumes. There’s precious little else, so bring your own drinks and snacks. 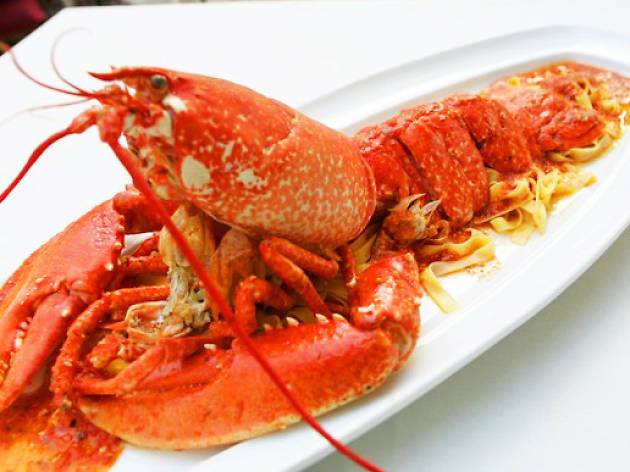 Fronting the four-star hotel villa lodging of the same name, the Barbat overlooks the outskirts of Rab town and the Adriatic beyond from its location at Banjol. Looking around from your prime spot on a pretty terrace, decked out in greenery, you’ll spot a tank of lobsters awaiting your consideration. Once chosen and cooked to perfection, one will be sat on a bed of perfectly prepared pasta, the signature dish here at the Barbat. You can preface the main course with a delicately created carpaccio, again fish the best way to go, or perhaps a selection of top-quality prosciutto. 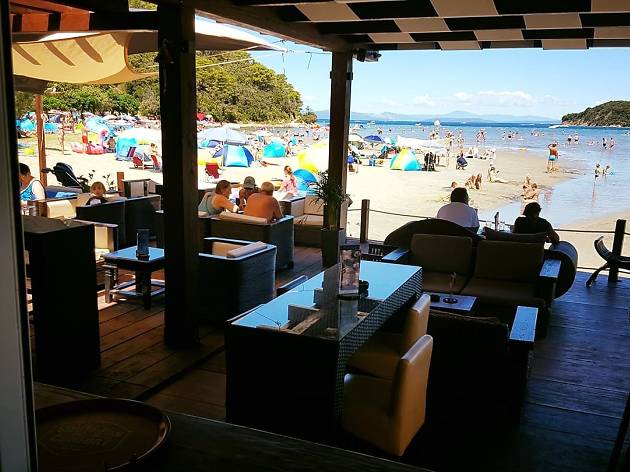 Set by Matovica beach, in an area of wild countryside, undulating coast, holiday homes and isolated nudist beaches, the Bar Del Mar is one of a handful of similarly named spots overlooking the sea around Rab island. This one, at Suha Punta, is also next to a sports centre, so you a group of you can enjoy a game of volleyball, mini golf or tennis before plonking yourselves down on the lounge seats for a well-deserved cocktail. DJs and live acts provide entertainment through the summer. 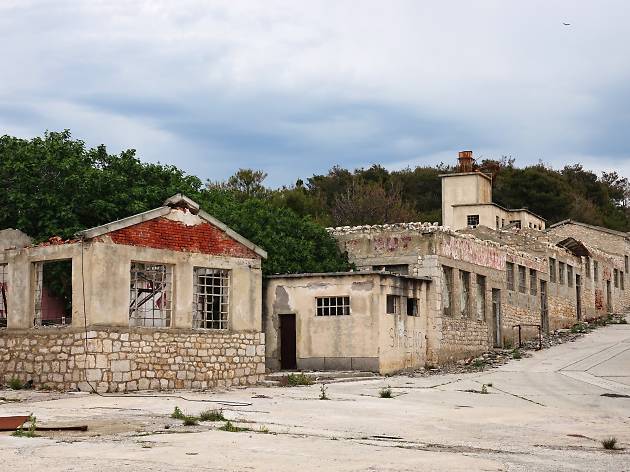 Strangely alluring despite its hideous reputation, Goli otok (‘Naked Island’) lies just off the north-east coast of Rab island, halfway to the mainland. Here inmates – Russians during World War I, political prisoners during Tito’s Socialist régime after World War II – were kept in terrible conditions of forced labour. It is thought some 16,000 suffered imprisonment here, around 400 died and no-one escaped. Wandering around today, you can see the factories where wooden furniture and metal piping were made, and the quarry were rocks were broken. There was even a school and a hospital, and, chillingly, an isolation unit. Tours can be arranged through Visit Rab. 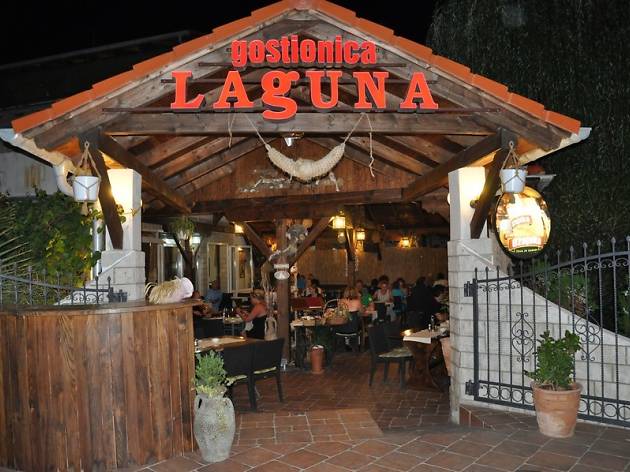 In business since 1968 and run by the Čolić family, whose ancestors were part of a local noble dynasty, Gostionica Laguna is located a short walk from Rajska Plaža, the main public beach in Lopar. Here the house speciality is suckling pig on a spit, slow-cooked for maximum flavour. Lamb is also prepared in the same way, or braised under a peka lid, a traditional method lasting several hours. To sample all of Laguna’s carnivorous delicacies, order the house platter for two, with or without a special fruit sauce. 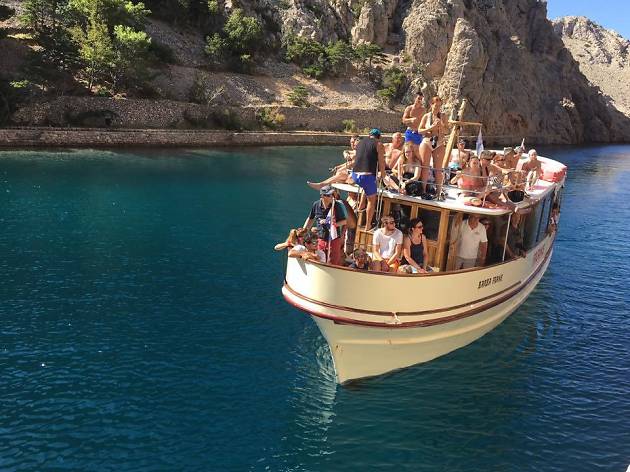 Moored beside Rab’s historic centre, the Barba Šime often provides the highlight of people’s holidays, offering three different excursions, two by day and one after dark. Swimming, diving and underwater discoveries around little-known coves are the underlying themes of each tour, visitors being taken to destinations such as Duflin island, Zavratnica and Njivice beach, all unrecognised by GoogleMaps. The night panorama is particularly memorable, accompanied by dinner at Armata cove. Anyone fit enough to swim can join – though tours can be affected by bad weather. 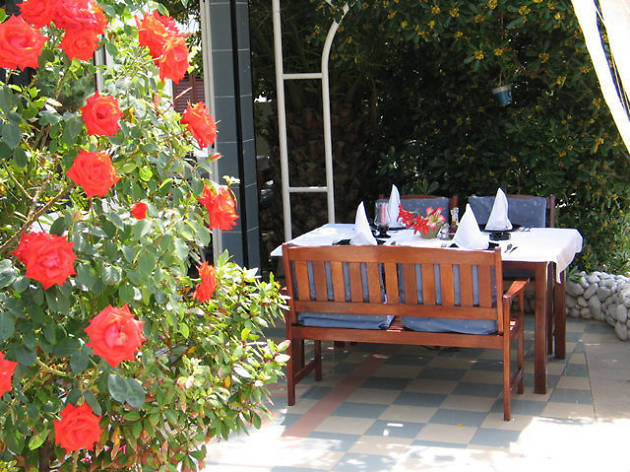 Uphill from the beach and across from the Hotel Lopar stretches this beautifully sculpted terrace, where palm trees grow from a tiled floor, providing a sought-after shaded spot for pleasant meals in an attractive, casual atmosphere. Fortuna has the usual seafood offerings, plus mackerel, hake and sole – lobsters are ordered a day in advance. Check the chalkboard for specials, written up in German.