A multimedia exhibition by art collective Forward Assembly, SFW or Safe for Work/So Fucking What breaks down barriers between artistic disciplines and creative freedom. Olivia Lai chats with co-founder Yvette Tang about the group’s inaugural exhibition

Hong Kong may be known for its glitzy art world, from the well-heeled auction houses to annual extravaganzas like Art Basel. Yet to the average Hongkonger, it’s all a world away. Yvette Tang and Wing Shya from Forward Assembly hope to change that. They’re here to make art more interesting and accessible to everyone and anyone, starting with their SFW multimedia exhibition.

“We see the struggles of creative workers in Hong Kong,” says Yvette Tang, one of the founders of Forward Assembly. “There’s a lack of opportunities and the bridges required within and among industries. We want to do something for this community, so it can grow and expand.” While Hong Kong has seen a growth in institutions and the development of a philanthropic culture of support for the arts in recent years, many local artists still struggle to find their identity. Tang feels that there’s a gap in terms of connecting the culture and lifestyle parts of being an artist, as well as the lack of a creative network around them. “For people in the creative field, they need that constant creativity in the air,” she says. “To be inspired, they need to be surrounded by fellow creative people who love the craft in order for it to grow.

Having left the real estate world and pursued her passion for the arts, Tang and notable Hong Kong-based photographer Wing Shya founded Forward Assembly earlier this year. The name, taken from the military term, describes a group of people with different skillsets working together and trying completely new strategies to go against their opposition. A fitting moniker then, for the collective. “Since we all have different backgrounds and experiences at Forward Assembly, the term felt like it really did reflect our dynamics,” concludes Tang.

Inspiring artists are key for Forward Assembly. Tang believes that contemporary Hong Kong culture has produced groundbreaking work by people in the city. Yet most this work is found within the music, film, design and fashion industries. Essentially every but in contemporary art. Forward Assembly is using the exhibition as a stepping stone to explore and discover interesting creative minds. It’s about finding the hidden artists within Hong Kong individuals and translating their ideas to the art world and to the public. As its starting point for making art more accessible, Forward Assembly’s SFW is an exhibition that brings together a range of multimedia installations as the group seeks to dodge the traditional reliance on paintings and looks to change the way we interact with art. “Multimedia simply has more varieties to stimulate different people with different preferences. Video, for example, speaks directly to people, even those who can’t read paintings and don’t have a background in art. Using multimedia, it’s more exciting not only for artists but for the audience when there’s greater variety,” states Tang. “Technology is bringing art forms together. There’s less defined boundaries and variations. We want to speak to a greater range of audiences and we want people to bring home a brand new sensation or inspiration.”

Collaborating with Tang on this exhibition in Sai Ying Pun is the editor of Leap magazine and curator Robin Peckham, who, along with Tang, came up with the exhibition’s title, a reflection of the two polar attitudes most people have to life. “These are two of your basic options when you approach the world as a creative person,” says Peckham. “You either embrace the system or you can just watch the world burn.” To symbolise the dichotomy of the concept, the show is staged in two ways. One is in an office space setting to echo the playing-it-safe approach to things and the other is a jungle theme bursting with botanical paraphernalia to embody things more entropic.

Wanting to create an original look and an innovative way to present an exhibition, artworks and installations are split between several floors and are designed with an audience’s journey in mind. Starting from the ground floor of the exhibition, viewers are first presented with works that have a more formal sensibility and relate to popular culture. The subject and style of the artworks are easily accessible and recognisable. But as the audience continues through the exhibition, the presentations grow gradually more complex.  “Once viewers immerse themselves in the artworks, they are given the freedom to bring that immediate understanding from the first piece and bring that sense of immediacy to the other works they’ll encounter after that,” says Peckham. 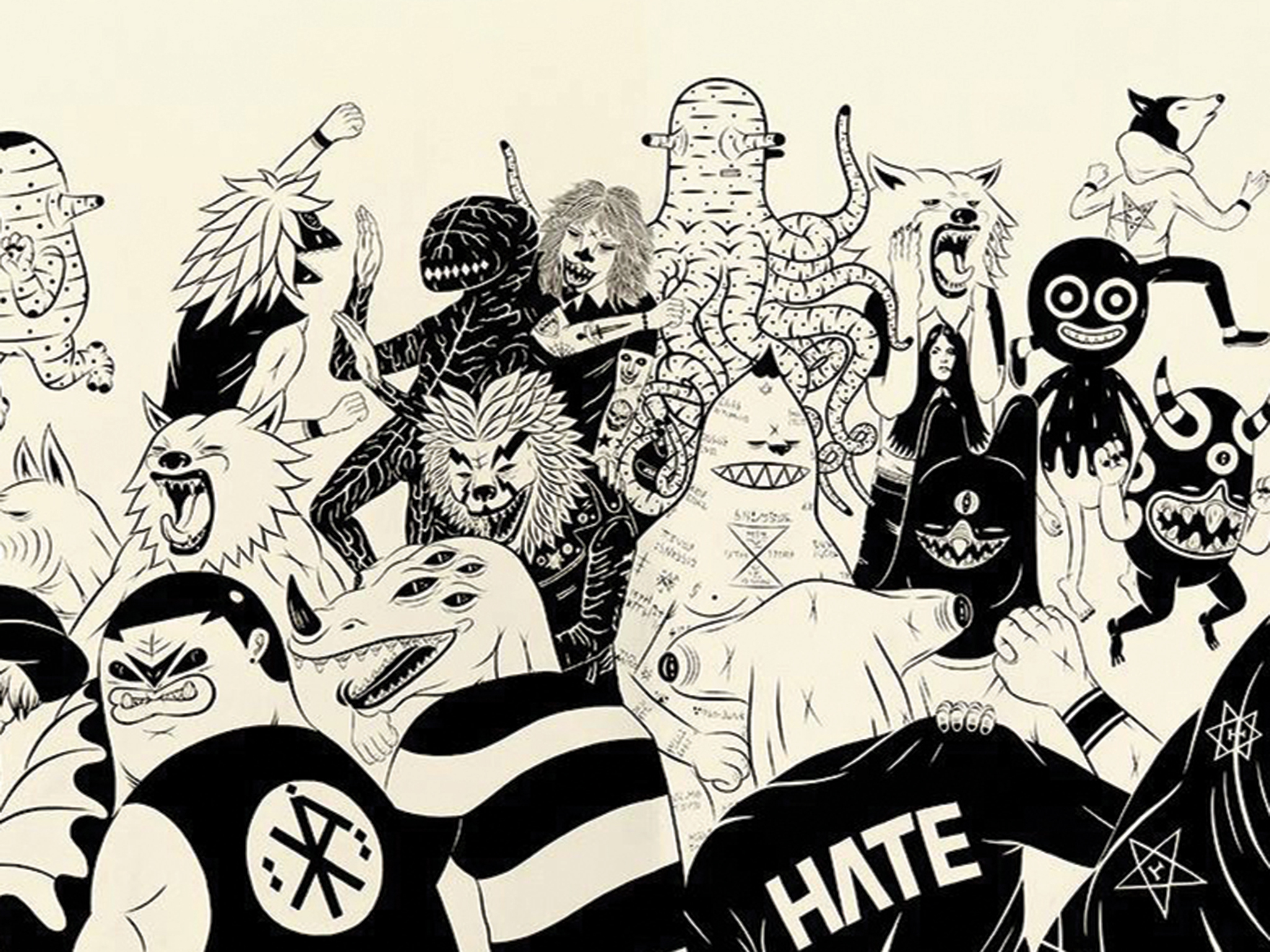 Adding another layer to the antithetical themes, the exhibition also showcases independent and comissioned works, which include advertisements by participating artists, demonstrating the creativity that lies between freedom and restriction. “What’s exciting about that is seeing these side by side,” says Peckham. “What you see is the shared sensibility. You see the practices that piece those things together. That’s where the artists’ creativity really is.” Peckham also insists the age old idea that commissioned works are less valid than original pieces is bunk. “The whole point of the show is that commissioned work can be just as creative, if not more,” he says. “Restrictions can be just as compelling a creative force as freedom can.”

From video productions about gender dynamics and paintings of alien figures to ethereal political  photography and innovative installations involving mirrors, the SFW exhibition is a conglomeration of creativity and ideas with the single goal of making art less boring for audiences. The exhibition successfully brings together more than 20 local and international artists under one roof, demonstrating the shared aspects and practices between artists despite their contrasting creative backgrounds. “It’s like a melting pot and a cultural exchange of artists,” says Tang. “We’re bringing everyone together without a segregated type of display or showcase. We also hope the artists find inspiration even among each other when they see their works.” 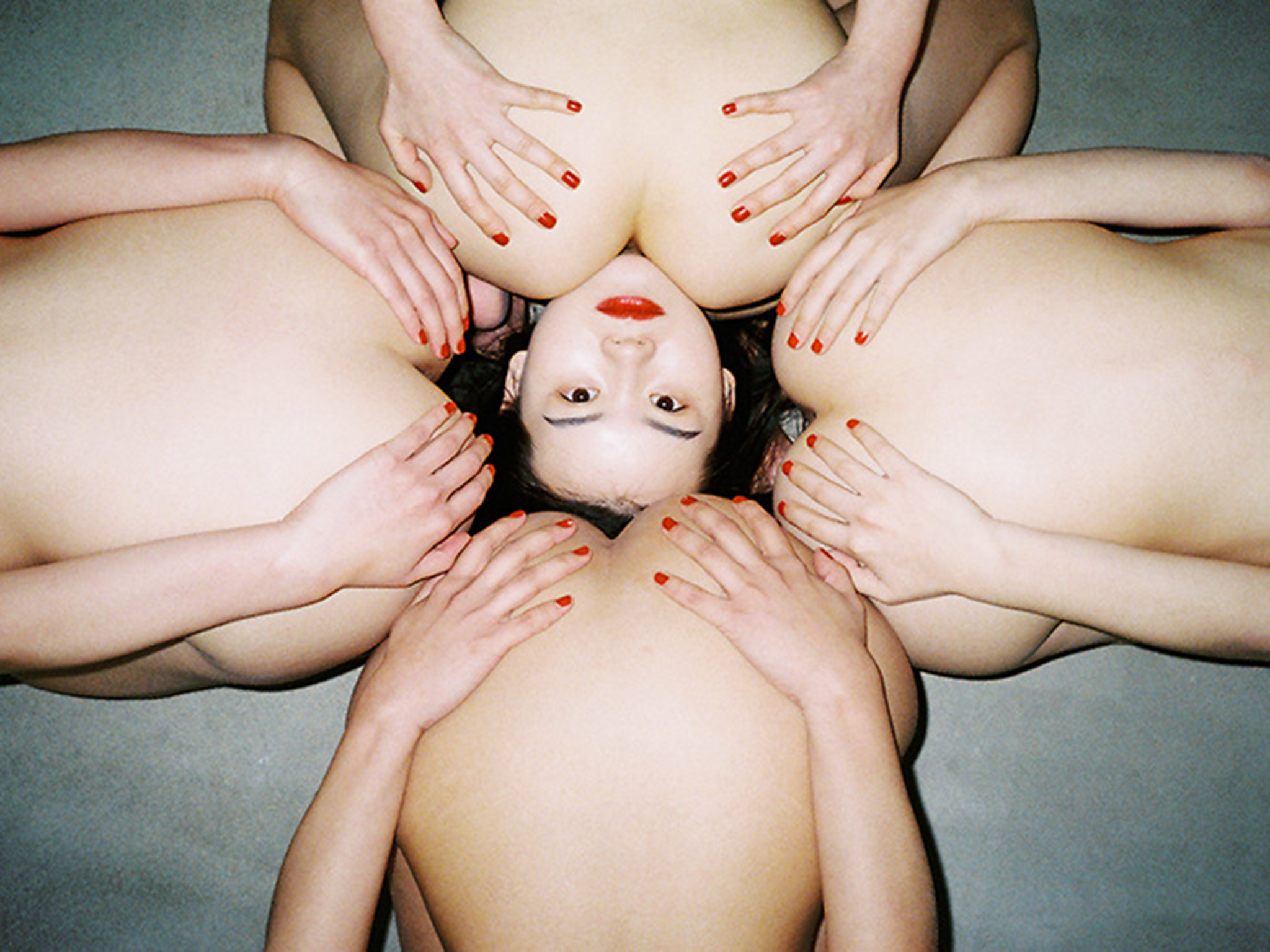 This marks Forward Assembly’s first exhibition as a team and they’re incredibly excited to see the responses towards the show but, more importantly, they want audiences to take away the idea that anyone can be creative. “We want to show that anyone can do anything they like, especially the younger generation,” enthuses Tang. “We try to arrange a lot of different schools to do field trips so students can learn and understand that art is more than just a hobby or an interest. Art can be a profession.”

Looking ahead, Tang plans to explore more outside the box exhibitions in the hope of inspiring and connecting Hong Kong’s creative minds. “We might be doing something that’s not according to traditional art industry practices. But we’re not about challenging or breaking through boundaries,” she states. “We just wanted to do something we organically enjoy and to create a space where artists can create without boundaries.” As a final thought, Tang adds: “We’re just a bunch of inexperienced punks with these big goals and a passion for what we do.”