Interview: Chinese artist Li Qing on painting Hong Kong from the perspective of an outsider

"It's a snapshot of what I took away from Hong Kong's culture. I'm providing viewers a new lens with which to see through the eyes of a Mainlander"

Like stepping through a portal into history, Li Qing’s series Neighbour’s Window is a glimpse into Hong Kong’s past. Through bottle green and dirty brown window frames reminiscent of colonial buildings from the 1970s and 80s, Li’s paintings peer into night scenes dominated with giant neon lights. For Tang Contemporary Art’s final exhibition of the year, Li, working together with acclaimed curator Cui Cancan, presents a collection of semi-realistic oil paintings and video art to provide snapshots of Hong Kong from the perspective of a Mainlander, forming an ambiguous link between the past and present.

Born in Zhejiang province, the Shanghai and Hangzhou-based painter grew up using oil paints and graduated from the oil painting department at the China Academy of Art in 2007. Fascinated with exploring a viewer’s perception of art and breaking down conventional approaches regarding an audience’s interaction with works of art, Li has created innovative pieces that do just that. His Find the Difference series, for example, as the title suggests, invites viewers to spot subtle differences between two almost identical paintings. “It was one of my earliest concepts,” recalls Li. “When an audience goes looking for differences between the two images, it becomes like a game for them. It creates a whole new interaction. I don’t think it’s ever been done before.” By creating a situation where viewers focus on the minute details and the differences, they lose sight of the larger image, a departure from how most people view paintings.

Following this early experiment, Li came up with another unconventional creative process where he presses two paintings on top of each other before the paint is dried only to separate them once again. The results are two brand new artworks where two different scenes depicted in two different paintings are blurred as one. With this technique, Li takes a backseat as creator and allows the paintings to do all the work. The artwork Two Films, from his series Images of Mutual Undoing and Unity, on show at the exhibition, is created using this process. Li paints two similar scenes on a pair of canvases depicting an open-air erotic film playing by the sea. By pressing the two images together, the final work becomes a representation of how memory can blur and, at the same time, hold different meanings under different circumstances. Photographs of the original paintings are also displayed next to the two works in their final stages to provide the audience a reference of what they looked like before and to demonstrate the process of transformation. 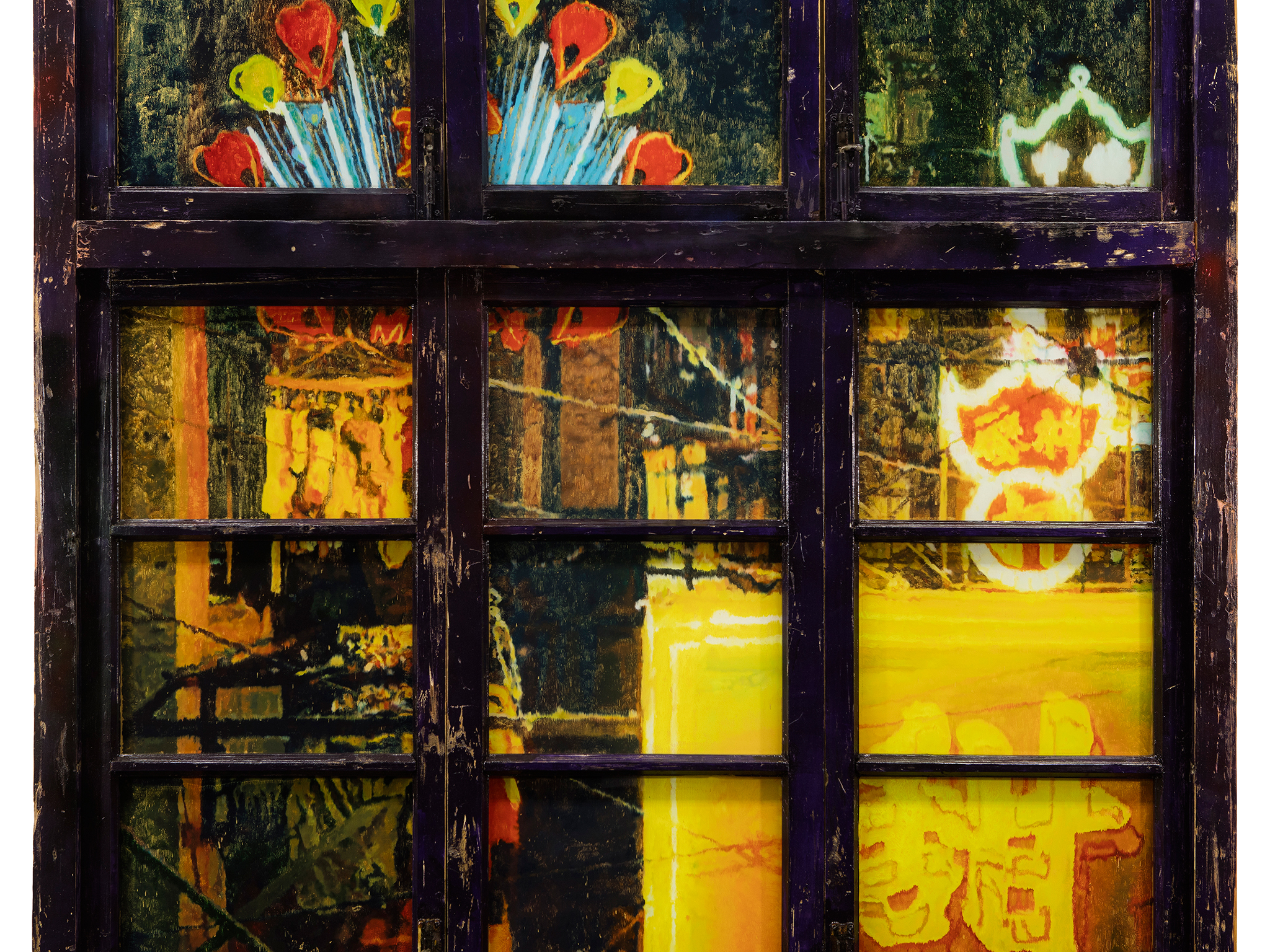 Keen to invent new ways to change and disrupt a viewer’s perception, Li began working on his Neighbour’s Window series in 2011. “Much like the other two concepts,” says Li, “Window is about the relationship between the painting and viewer’s perception. These paintings are almost like an illusion, presenting something that is artificial, something that’s not real behind window frames. But behind each window are views and architecture that can be found in real life. So there’s a layered relationship to it.” Disrupting the natural gaze and inviting viewers to re-examine how they look at things, once the viewer peers through Li’s windows, they realise they’re not actually looking at to the outside world.

For this new exhibition, the windows on display all look out on to Hong Kong night scenes, with an emphasis on old neon light displays and billboards flashing words in Chinese like ‘emanating glory’, ‘returning triumphant’ and ‘sweet’. Stemming from his examination of his own identity and his life experiences as a Chinese artist, the series is a reflection of how Li approaches Hong Kong as an outsider, a non-local Chinese looking at our city’s culture. Accompanying these paintings is video footage taken by Li during his time in Hong Kong and other cities that he’s lived in, similarly featuring shots of seemingly random Chinese words.

Based on fragmented memories of his short visits to the city since 2009, the exhibition is meant to be a superficial and shallow interpretation of Hong Kong and not necessarily an accurate portrayal of our SAR. It provides interesting insights for local audiences to be able to see through Li’s eyes and witness the impressions our city has had on him and the little things that grabbed his attention. “It’s a snapshot of what I took away from Hong Kong’s culture,” Li tells us. “My own impression and vision of the city. I’m also providing viewers a new lens to see through: the eyes of a Mainlander. It helps [locals] reflect and think about their own perception and culture of the city. For example ‘why did he paint neon lights? Why has this artist put tabloids in the forefront?’ I wanted to show how typical Mainlanders understand how Hong Kong is today.”

Our tabloid news culture has made a particular impression on Li and inspired him to incorporate elements of it into the show. He says: “The Chinese characters behind the windows and the different words I filmed for the video are compiled together in the style of tabloid news in Hong Kong.” In one example, some words are edited together to report an old celebrity passing away. “The old neons and the tabloids, they’re what defines Hong Kong to many Chinese people,” Li adds. “But for a lot of people who live here, these might be things already of the past. It’s old Hong Kong to them, so these works create a dialogue between the images and the viewers.”

Back in Hong Kong, Li remarks on how, despite the massive transformation the city has undergone in the past century, he remains amazed at how there are still plenty of nuggets of history that exist around town. “You can still find things in Hong Kong that have begun to disappear in China,” he says. “I was recently in Temple Street and you see things like karaoke tents and mahjong parlours. To come to Hong Kong and be able to find the old China that doesn’t even exist in China is incredible. The city is so culturally rich. It’s both very international and authentically Chinese. You also don’t see as many layers of history in Chinese architecture on the Mainland. You can’t see the history and passage of time. That is what makes Hong Kong unique.”