Richard X Zawitz: "I'm not going to make something really weird and have people guess what it is"

The American sculptor on his Hong Kong show, his signature curvism and the importance of creativity

Despite having recently celebrated his 70th birthday, American sculptor Richard X Zawitz emits the energy and enthusiasm of a man half his age. The creator of the Tangle – a toy connected by 90-degree curves that can be twisted and pivoted at the joints – Zawitz is lauded for his monumental infinity sculptures, works of art immediately recognisable even to those unfamiliar with Zawitz himself. A familiar face and active participant in the Hong Kong art community for the past 20 years, Zawitz is unveiling a new exhibition at the Exchange Square Rotunda in Central, featuring 19 large scale sculptures that explore the theme of human civilisation and evolution as witnessed through the eyes of our primate cousins: monkeys.

“This is more than just an exhibition,” says Zawitz. “This is going to be a sculptural play. Each of the figures represents something very important in civilisation.” With monkey heads and bodies shaped in the form of Zawitz’s signature curves, each of his new creations references significant historical, cultural and scientific archetypes, ranging from female beauty and commerce to sport and creativity, to list but a few.

Having grown up in 1950s America, art education was lacking for Zawitz. But then along came the 60s and the hippie movement, which allowed him to discover his creative side. “I’m in the first wave of the baby boomers,” he says. “By 1966, I was already tuned in, turned on and dropped out.” Around the same time, Zawitz was introduced to the philosophy and works of Chinese Taoist master Chan Wing-tsit. He was inspired and discovered an inner urge to create. “With a hammer and chisel of all things,” the artist exclaims. “It was always going to be sculpture. It was 100 percent natural for me to pick up a hammer and a chisel. So I started from there and self-taught myself.”

Originally working in wood and stone, Zawitz’s creations evolved into plastics and eventually to his trademark stainless steel, a material that has strong ties to his origins. “Pittsburgh, my hometown, is famous for its steel industry,” he explains. “It’s also the home of Andy Warhol, who has been one of my main inspirations. I am also attracted to things that are hard. Things that encapsulate hardness, durability and timelessness. So there was a natural inclination for me to turn towards steel.”

For all his talk of toughness, Zawitz is also the inventor of a sinuous style called curvism. “Curvism is an object that curves, but from a creative point of view,” he says, “Even from my very earliest sculpture, I found myself making bulbous, rounded shapes and shapes that curve.” Heavily influenced by Taoist philosophy as well as his mentor, Prithwish Neogy, who he studied under at the University of Hawaii, Zawitz’s sculptures are a reflection of his belief that life is never a straight line. “Energy, light and sound travel in cycles,” he explains. “In nature, you see vortexes in every form and the galaxy is formed in vortexes. In almost every culture and art, there’s something that curves, from Van Gogh’s paintings to the Tibetan knot. That’s how I came up with curvism and my infinity sculptures.”

Uniquely shaped and readily identifiable, Zawitz’s infinity sculptures are so well known that even stars like Michael Jackson were collectors of his work. His sculptures have been popular prop pieces in many Hollywood films, including, most recently, the Entourage movie. Despite its use as an artistic bauble in popular culture, Zawitz wants his work to be about truth and positivity. “What I try to do with my work is all about truth. I’m like the anti-Trump,” he jokes. “But that’s the goal here. To boil down to one essential ingredient. To tell the truth and, through that, manifest my positive energy.”

As a creative, Zawitz believes in inspiring audiences to re-evaluate their worldviews, particularly with this new show. “I want to get people thinking about why they’re here and to be more compassionate,” he says. “We are here to be creative, not destructive,” he adds. Initially, Zawitz struggled to tie the theme, the monkeys and the venue together while ‘amusing all the jaded people of Hong Kong’. An interest in social anthropology eventually helped motivate him to visualise and transpose different historical and cultural archetypes into anthropomorphic sculptural forms, demonstrating the progression of mankind and raising the question of who we are and why we are here. 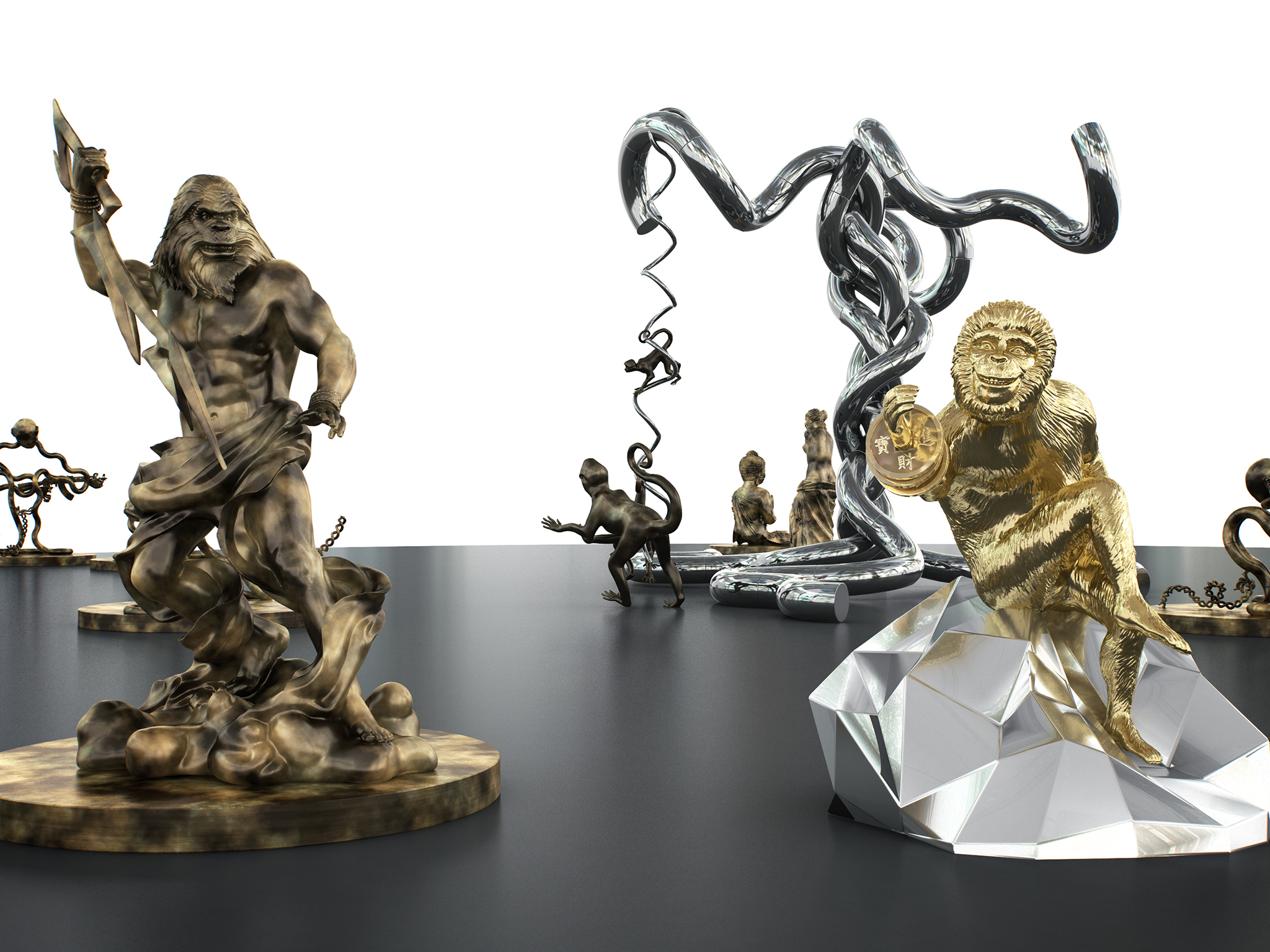 To be displayed on a 30m circular stage in Exchange Square, the exhibition features a four-feet-high abstract sculptural tree titled Tree of Infinity sitting right in the centre, surrounded by 18 sculptures representing the different archetypes. “On the Tree of Infinity is the naked ape,” reveals Zawitz. “In the show, I evolve the ape through different archetypes to the latest human being. What I like to call the homo sapien iPhone man. It’s what I view as the latest iteration of the human being.”

Covering a lot of the classic archetypes such as happiness and evil, represented respectively by a laughing monkey with a Buddha’s body and a sinister looking monkey holding an AK-47, Zawitz has also created more unconventional archetypes, including commerce and magic. The latter has been fashioned into a monkey holding a diamond in one hand and a snake in the other. If you feel confused by how these archetypes are represented, don’t worry. Each one of the artifacts comes with a written explanation. “I’m not asking viewers to guess,” Zawitz says. “It’s like a trick in the art world. Make something really weird and make people guess what it is. Well, I’m not going to do that. I’m going to give people the answers.”

Zawitz is particularly excited to showcase his new sculptures here in Hong Kong, a city’s he’s been closely involved with for the past 20 years. So much so, he has even set up a studio in Wong Chuk Hang. “My art is more at home in Asia than it is in America,” he says. “There’s more sensitivity towards it here [and] I have a very nice environmental relationship with Hong Kong.” Aside from challenging people’s perceptions, Zawitz hopes that audiences can simply enjoy the art and be inspired. “I really hope I can provoke, inspire, compel and initiate feelings of creativity,” he tells us. “I want to have people walk away and say ‘wow’. My goal as a creative is to project more creativity to the world. I want to change the course of history with creativity.” He also encourages viewers to touch the art and fully experience his work.

After decades of creating art, Zawitz shows no signs of stopping and is always looking to create bigger and better sculptures. “It’s so rewarding to make giant things,” he remarks. “I love making giant things!” The 70-year-old also mentions he’s currently working on an installation to be showcased in Kazakhstan and another sculptural show in Dubai. But the dream for Zawitz is to create a 100m-tall sculpture called the Statue of Infinity, Hong Kong’s answer to the Statue of Liberty. “That’s my dream: to build a sculpture of that scale by the Hong Kong harbour. To build giant sculptures in one or more cities in the world and connect my positive energy.”