“When you ask whether the future could be as bad as we imagine in the film, I think it’s possible”

Powerful, poignant, relevant and brave are just a few humble words that have been used to describe Hong Kong’s smash-hit socio-political satire, Ten Years. This exceptional film that hit city cinemas just before Christmas actually beat Star Wars: The Force Awakens in box office sales at the Broadway Cinematheque and has resonated with audiences so much, some are already calling it a ‘classic’. What it actually is, is a dark political satire that’s set in our city in 2025 and is broken down into five different short stories by five emerging directors. It’s nightmarish, it’s frightening and it’s a must-see for Hongkongers.

Beating out Star Wars is huge. And it’s ironic as both films surround the idea of a looming dark force threatening to take over in the future. In Ten Years’ case, however, the terror is prevalent because it could, just maybe, become a reality as our city’s landscape is politically and socially changed over the next decade. The quintet of directorial maestros — Ng Ka-leung, Chow Kwun-wai, Kwok Zune, Jevons Au Man-kit and Wong Fei-pang — depict a dystopian city where the worst of our fears have been realised. The Cantonese culture and language are dying out. China’s Communist Party’s influence is at its peak. A National Security Law is about to pass. ‘Youth guards’ are on patrol to keep people in check. In an act of civil disobedience, citizens resort to self-immolation.

We meet with the ve directors at Broadway Cinematheque in Yau Ma Tei to discuss the major issues that Hong Kong is indeed facing over the next 10 years, as well as whether their film is a propaganda piece and the likelihood of harmoniously coexisting with the Mainland in the future...

So, how did all of you meet?
Ng Ka-leung: In the beginning of 2014, I already had an idea to make this film. I knew Kwun-wai already and wanted him to help me with the film. He then introduced me to the rest of the directors and we felt they cared enough about social issues and would add unique voices and perspectives about what’s happening in Hong Kong.

What made all of you want to pursue this project, though?
NKL: In the beginning, we were asking ourselves questions like ‘what is the way out for Hong Kong? How can there be change?’ In the process of asking these questions, we chatted with a lot of people on their thoughts about the future. When we talked about the present, everyone said the same thing but every time we asked about the future, everybody suddenly felt like there was a way out. Or there was the feeling that, maybe something could change, that there’s a possibility – a hope. So, we held on to this feeling and tried to make a film about the future.

How do you feel about the overwhelming response and popularity of the film?
Chow Kwun-wai: It’s really cliché but it’s a dream come true. It’s quite sentimental, actually. It has sparked many discussions around the city, which is something we really wanted to achieve.
Wong Fei-pang: I’d like to think we’re nurturing something instead of being just purely driven by the box office to satisfy people’s senses. It’s not just purely entertainment. It feels like the other values of lmmaking are being highlighted by this project.

What was the biggest challenge in making this film?
WFP: I think the greatest challenge would have been failing to make the film. Once you start thinking about not doing it, the challenges start to come. But if you’re determined to do it, the challenges will suddenly be solved. The biggest challenge is persuading yourself to stay determined, no matter what.
Jevons Au Man-kit: Trying to keep things balanced and fair. My film is about language and there is contention between individuals that speak Cantonese and Putonghua. But it’s not about which is better. It’s about the characters’ perspectives. It’s about what they’re experiencing. I don’t want my film to be perpetuating propaganda.

But that’s an important issue, isn’t it? Aren’t you guys afraid of being labelled as radicals or propaganda pushers?
CKW: I was never afraid of that. But, realistically, it’s difficult for this film to be called propaganda because a lot of what we depict is actually happening right now.
Kwok Zune: We can’t worry about it. There’s bound to be angry people and people with varying opinions. As artists, we expect that. You just have to face it. If you can say what you believe, that’s already very good. And we should say it while Hong Kong still allows it.

Do you think the events you depict in the dystopian future might realistically take place?
NKL: In the past few years, we’ve seen some pretty bad realities in Hong Kong. Realities that are extremely absurd and illogical. So, when you ask whether the future could be as bad as we imagine in the film, I think it’s possible. There is real precedent for the events that we portray in the film.

What’s the greatest problem facing Hong Kong, then?
CKW: Self-censorship. And fear [laughs]. Whether this fear is stemming from self-censorship or from actual fear, I don’t know. Many people react to Ten Years and ask us ‘aren’t you guys afraid?’ I think this question, in itself, reflects what problem our society is facing.

Did you find any solutions to these problems during the filmmaking process?
NKL: Not really. There’s no absolute solution to those problems. We understand that change can’t be brought about by a certain solution.

What’s the one thing you think we should change first?
WFP: Something we encounter regularly is the sentiment that everything is alright. ‘Nothing is wrong. We continue living pretty normally. We have food, shelter, clothes and air-conditioning’. But things disappear gradually. It’s not going to all come suddenly like an apocalyptic disaster. ‘They’ slowly take away your freedoms, your rights, your space to speak. We have to wake up and realise things are not okay.

Are you optimistic that these problems can be solved? Can we coexist with the Mainland?
WFP: Sure, there’s hope if we start doing something.
CKW: I think Wong Fei-pang said it really well. The goal of Ten Years is to awaken people so they start seeing the problems around them before it’s too late. This film is a kind of provocation but it’s just the beginning. It doesn’t offer any concrete solutions.
AMK: We just want everybody to do their bit.
KZ: I think, overall, we lack an awareness of the need for a long-term struggle. So it’s very easy for us to be content with one or two supposed victories or to be discouraged by a couple of failures.

What do you think about the concept and ideology behind the word ‘localism’?
AMK: I think, compared to many places and cities around the world, Hong Kong really neglects its own culture and even language. When the British ruled here we spoke English. Now the Chinese are in charge, we speak Putonghua. This generation of Hongkongers, however, is starting to realise that there are important local values that need protecting and preserving. However, we don’t want to marginalise people either.
CKW: Actually, our film doesn’t really use labels. We don’t want to use a label like ‘localist’. We hate it. We didn’t use any labels like ‘yellow-ribbon’ or ‘blue-ribbon’. The film is for everyone. The most important thing is to be separate from politics.

What do you think about ‘umbrella soldiers’ being elected on to the District Council?
NKL: Well, we first have to de ne what ‘umbrella soldier’ is because it’s a pretty broad term. There are some non-career politicians who have been elected in the recent District Council elections. If you’re asking me what I think about that, I think that’s a good thing. I think it’s good to have more people who aren’t carrying the baggage of a political party, representing the true interests of their district’s residents. It also demonstrates a growing maturity in voters, who can now recognise which candidates are good for their district.

Ten years from now, even the [Guangzhou-Shenzhen-Hong Kong] high-speed rail will be completed. Good news?
WFP: Definitely not [laughs].
All: You said it!
WFP: The ratio between the project’s costs and its expected returns is at an absurd level. How many years will it take for them to break even? Another problem is whether it has a justified purpose for existing at all. Is it really to benefit citizens? Or is this about politics? You can’t deny that there is a very prominent but unresolved problem, which is the co-location arrangement. It has never been resolved but the project has been forced ahead. So, I extremely dislike the high speed rail. In a wider sense, I think the question to be asked is whether the government has executed its constitutional duty. Has it fulfilled its fundamental responsibility to serve the people? I don’t believe it has.
CKW: The high speed rail is a gash on Hong Kong. Whether it’s in the land or in people’s mentalities – it has become a gash. If it really is built in 10 years’ time, it will be gash that never heals and continues to bleed.

That’s very intense but fair enough! On a brighter note, though, do you guys think you achieved what you set out to do in making this film?
NKL: Ten Years was a process of self-questioning for the five of us. The second goal was to ignite discussion. If both of these goals have been achieved, then I think we did succeed. 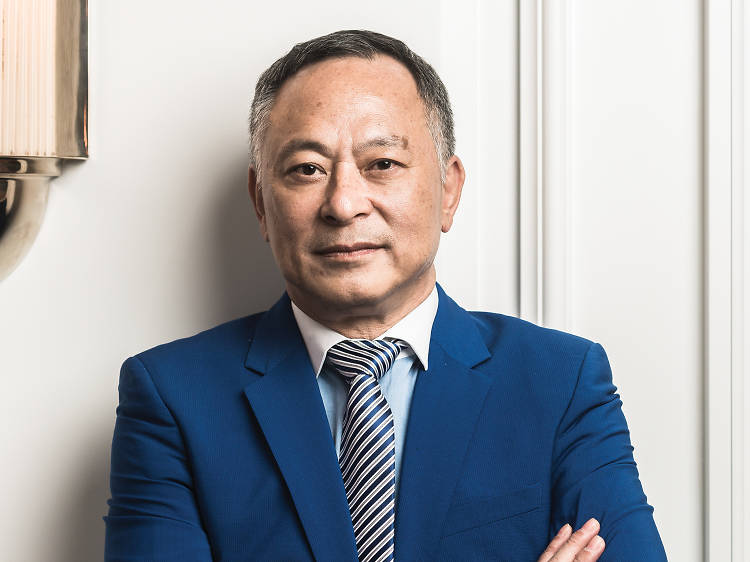