Planetrox China has seen dozens of local acts compete for the chance to perform at the Envol et Macadam alternative music festival (pictured) in Quebec this September and now the ultimate battle of the bands is coming to a head.

The grand finale is being held this Friday, 7pm, at The Doghouse in Tsim Sha Tsui. The five competing bands – Carrier 帶菌者, NastyDudes, Something Blue, Turing Apples and Wanchai Road – have 20 minutes to impress the panel of judges and the audience (whose votes will count) with a blistering set. There’ll be blood, sweat, tears and cracking live music as each band states their claim for a life-changing prize.

We caught up with the bands for a quick chat to get an insight into proceedings before Friday’s final...

First up, tell us a bit about yourself and your journey through Planetrox...
Turing Apples: We’ve known each other forever. We all grew up in Hong Kong, so even those that didn’t know each other that well were still hanging out in the same circles. We got into the Planetrox final back in 2014 but didn’t win. I was actually really ill that night and we almost didn’t play but we pushed through and I lay in the corner against the wall afterwards!

NastyDudes: We started NastyDudes four years ago and were introduced to Plantrox through [local rock outfit] Bamboo Star. They told us to join the band competition since we wanted more stage experience...

Something Blue: We are an unlikely assembly of ordinary Hong Kong people who found each other through a shared love for playing and experiencing music. Our journey through Planetrox started as a careless thought; all we had to do was send in a recording we had done and pay a small fee. Then by the time we had gotten into the semi-finals, we were beginning to find our sound and really polish a few songs. We’ve only been playing together for a few months (still a baby) but this competition has really helped us mature quickly!

Wanchai Road: As a young band, competitions like this one are amazing as an opportunity to get to know a lot of colleagues in the underground music scene, while playing outside of the usual spots in Hong Kong and playing to different types of audience. Furthermore, it was both a challenge and a bit of an adventure doing the video required for the semi finals. But we had a great great time shooting it and, more importantly, the response from the audience has been really good so far!

What would it mean to your band to win?
Carrier: This is the first competition we’ve ever entered, so for us it would be a huge boost – we’d be able to share the happiness with the people who have always supported us: our families, friends and fans, our community.

Turing Apples: Winning this competition would demonstrate that our efforts and dedication to this band has its rewards. We’ve put in a lot of work to improve our songs and live show since our last appearance at Planetrox.

Something Blue: Winning this competition would mean so many things for all of us. Actually, most of us do not work normal 9-to-5 (or I guess 9-6/7/8/9/10 in Hong Kong) jobs and are the type to seize any opportunity life throws at us. I can’t say for sure what it would mean to us yet, but it would definitely open up a lot of possibilities! Also, it will be the biggest crowd we’ve played for as a band, so we’ll take that as a win anyway.

Wanchai Road: If we win the final, it would mean a big step towards our biggest dream, which is to become a professional band at some point. Of course, that’s a very long road to cover, and as part of that road we’ve always dreamed about doing things like playing abroad, being part of a huge music festival, travelling together as a band, etc. All of that while keep creating our own original songs. So, being at the final stage of Planetrox is already a big prize for us but we won’t stop dreaming about winning the biggest prize that means we get our tickets to rock it out at the festival in Canada!

How does it feel to come this far?
Carrier: Every small step takes you closer to your dream. As with the rest of life, you have to hold on to the passion, remember every moment; when we look back the way we came, we see it wasn’t easy but it was still enjoyable.

NastyDudes: We were so excited when we were informed that we were going to the final. It’s given us motivation to practice even more to make sure we can do our best at the final stage.

Turing Apples: It’s very exciting to be chosen to qualify for the Hong Kong final. Having played once before and not made it, we’ll be trying extra hard to impress this time.

Something Blue: It sort of doesn’t feel real, like it’s all a prank. But the fact that we may have a chance to play for a crowd that I would be too afraid to stand in makes my heart beat out of my chest.

Wanchai Road: If you were to tell the younger versions of us where we are now, we wouldn’t believe it! We truly love what we do and that’s reflected in the music we create and everything we do.

What do you think makes your band stand out from the rest?
Carrier: We think every band has a different character, but you’ll see we’re instantly unusual. For starters, our vocalist – her voice can be sweet and cute but she can also rock. She can scream. So when we create songs there’s no limit. It can be unpredictable, which means it’s fun for audiences to see us perform.

NastyDudes: What makes us stand out from the rest is that we bring energy to the stage and get everybody dancing!

Turing Apples: Our unabashed devotion to fierce scientific debate, walking a fine line between pure noise and melody and our curious tendency to write songs in 6/8 time, I think, makes us different. Oh, and the fact we are named in honour of a chemically castrated genius...

Something Blue: I think we’re different from most other bands because we’re not limited to a particular style of music. We’re not afraid to experiment with different sounds and styles. I think someone watching us for the first time will hear familiarity yet originality.

Wanchai Road: Our wide mix of cultural influences (five members, four nationalities: Spanish, Argentinian, American and British) is something that differentiates us from the rest. Besides that, maybe it’s the pretty accent and smile of our lead guitarist; the drummer’s amazing muscles, seasoned with a handsome architect that plays piano the way he does; topped with the dance moves of our bass player and a singer with a massive lion-like hairstyle. All mixed in a big bowl of enjoyable live performances!

If you win, how will you celebrate?
Carrier: We'll write a song to cherish the moment and, of course, we’ll celebrate in Quebec.

NastyDudes: If we win we’d definitely host a party and invite anyone who supported us.

Turing Apples: I expect we’ll run around TST screaming and potentially get arrested. But you’ll just have to vote for us and see…

Something Blue: We’ll definitely celebrate with lots of food and drinks regardless of the outcome, but it would be great to extend our celebration to Canada! We would tour around the country and maybe travel down to the US. Most of us have not been to North America so what an opportunity to explore!

Wanchai Road: We won’t sleep the entire night, that’s for sure! And yes, later that night you’ll probably find us around Wan Chai listening to more live music and hydrating our sexy bodies with glasses of what may or may not be sparkling water on the rocks. 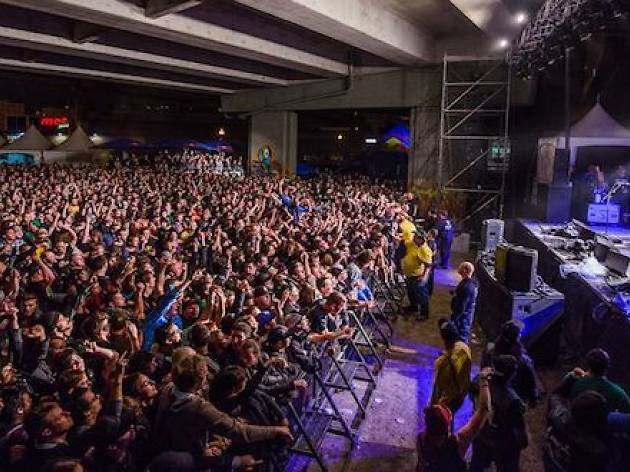 Planetrox China has seen dozens of local acts compete for the chance to perform at the Envol et Macadam alternative music festival in Quebec (pictured) this September and now the ultimate battle of the bands is coming to a head.