Come the weekend, the rattle of mahjong tiles being shuffled before a game is a common sound. It creeps out of apartments and into stairwells, an indelible part of local culture. Nowadays, most mahjong sets are mass-produced in factories on the Mainland. Only a handful of artisans who are able to engrave the tiles by hand remain in Hong Kong. Jordan’s Cheung Shun-king is one of them.

“I’ve been in the industry for more than half a century,” Cheung tells us. “I grew up surrounded by people who made mahjong tiles, as both my father and grandfather were in the business.” Cheung goes on to tell us how he acquired his skills solely by observation. “I didn’t start off as an apprentice to the old masters,” he says. “It began with the old masters giving me tiles on which they made mistakes, which I could engrave for my own amusement. I closely inspected their techniques.” In retrospect, Cheung jokes that it was a mistake to have learned the techniques for fun, because once he knew how to do it, he was obliged to help out with the family business. “Those were the days when we had too many orders and too few staff. I had to help out on the side as a child,” he mentions. 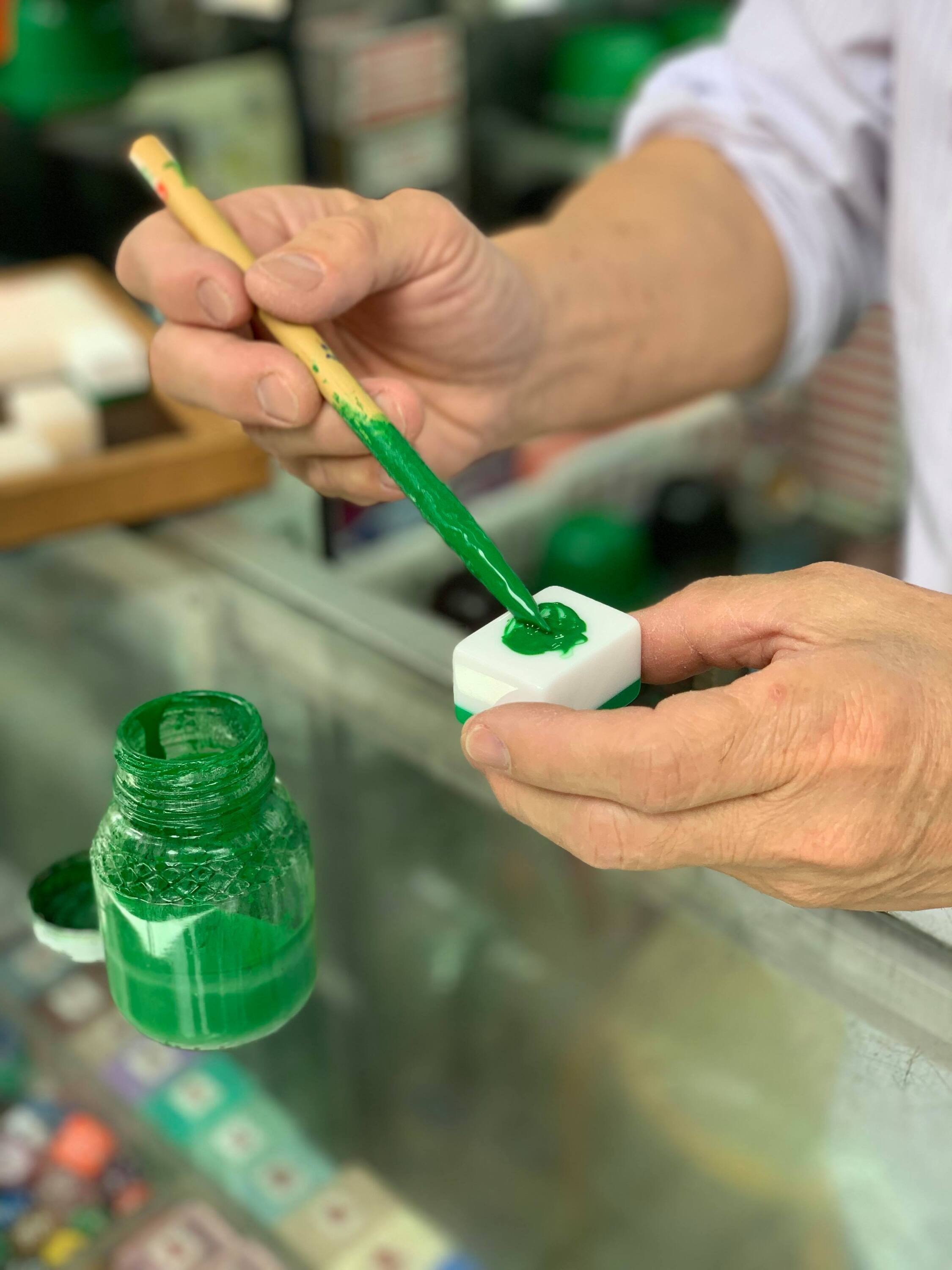 A self-taught craftsman, Cheung demonstrates his virtuosity by engraving the green 12-stroke character ‘發’, meaning fortune, on to a tile in less than five minutes. Afterwards, he shows us a myriad of homemade knives, cutters and other utensils he uses to go about his business. “I made these myself and some have lasted for decades,” Cheung says proudly. Off to the side is a box of blades and knives that have ‘retired’ because of the wear and tear from use over the last five decades. “They mean a lot to me and I’d hate to lose them,” Cheung confides. “I’ve almost kept all of the ones I’ve ever used.” He reveals that the metals used to make these tools are very cheap, but it takes a lot of effort to transform them into knives and blades suitable for mahjong engraving. Cheung picks up a blade and shows us. “It takes at least half a day to make the right cuts and angles on a knife like this, for example. That doesn’t include the time required to sharpen them every time you engrave. It sometimes makes me very frustrated!” Like a Zen master, Cheung reveals the trick is to be calm and relaxed in order to do it well. “I’m not making this up,” he insists. “The more impatient I am, the longer it takes. If your concentration level slips at the end, the edge of the blade could chip and you’ll have to start again!”

Back in the day, when demand was high, Cheung says a day’s work could mean restoring the engravings of 10 old sets or engraving up to five brand new sets, each set containing 144 tiles. Sadly, these days he only gets orders for three or four new sets each year. Talking of the past, Cheung reveals that he used to make dice as well. “In the heyday, which was two to three decades ago, one set of three dice cost over $300. And they were sold in bulk, not one or two sets, but hundreds. Actually, mahjong was not the main business in mahjong stores. We’d only do it if we had free time. It came last in our line of business,” he says. Cheung explains that a mahjong set cost around $400 then – far less return for the effort than the $300 charged for three dice. “This area alone [Jordan] had around 10 mahjong stores. Each store had three to four craftsmen for engraving. In some larger stores, especially those for exporting, it could go up to five,” Cheung reminisces. “But there are very few of us left now.” Although hand-engraved mahjong tiles cost much more than mass-produced ones, Cheung reckons that, ‘the worth is in the eyes of the beholder’. “It’s also a testament to your craft as to whether you can justify the price you charge,” he adds.

Cheung gives us a prompt ‘no’ when asked whether he’s going to miss anything if his store is eventually forced out of business. “Of course, I hope it will survive,” he tells us, “but there’s not much I can do if the industry is in decline like other traditional crafts.” Phlegmatic, Cheung shrugs. “I see it as a job” he says, “I’m in my 60s now. All I want is work for another eight to 10 years.” Ambrose Li