When you walk into Repulse Bay’s Tri, you walk through a world that’s modelled on rural Balinese life. It’s fitting, as the eatery at The Pulse mall claims to be Hong Kong’s first Balinese restaurant. Certainly, it takes as many natural elements from the Indonesian island as it can. Mini-huts made of bamboo and lotus pod chairs feature across the venue, set against surrounds that take their motifs from Bali’s natural environment and culture. Plus, at Tri, the wow factor doesn’t just end inside. Outside, there are stunning views of Repulse Bay and the sea. This is as much an island paradise as it is a restaurant.

The Balinese themes don’t stop there. Naturally, the food takes elements from Balinese cuisine, particularly the summer special Taste of Bali menu that includes a range of fab authentic dishes to share. And the name, Tri, is based on the Balinese philosophy of ‘tri hita karana’, the three ‘causes of well-being’ – namely, the harmony between man, nature and divinity. And there’s yet another island theme. The chef’s name: Beach. Conor Beach, originally from the USA, heads this Southside restaurant, which opened at the end of last year, with aplomb.

Executive chef Beach’s love of cooking began when he was just eight-years-old, in a busy
family with his five siblings. From confectioneries to fresh pastas and barbecued meat, he would spend hours researching cooking techniques and trying his own dishes. Later on, he took up a career as a chef. By the time Tri opened, he brought with him almost a decade’s worth of experience in fine dining establishments. He was previously the chef de cuisine at Hong Kong’s stylish French restaurant Bibo, and has worked at the two Michelin-starred Restaurant Apicius and ‘new bistrot’ La Gazzetta in Paris, as well as Charlie Palmer’s Dry Creek Kitchen in California. He has become an expert in Balinese cuisine and his emphasis is on both authenticity and innovative, modern twists. Don’t take it from us, though. Take it from the Beach...

Hi, chef Beach! So, you previously worked at Bibo but you’ve moved on to Tri at Repulse Bay. How do these restaurants differ?
While the flavours at Tri are different from those at Bibo, we share the same commitment to making in-house everything we serve. There’s definitely more work involved at Tri, though. The food is more labour intensive and there’s a lot more trial and error for me when I cook Balinese cuisine as opposed to French.

You learned your culinary skills in the USA. How did you learn to cook Balinese food?
While I learned to cook first in the US, I did most of my training in Europe. I learned Balinese through research, travel and cooking with Indonesian chefs.

Which ingredients do you source from Bali for the restaurant?
We source coral trout, green lobster, coconut products and a handful of spices from Indonesia. The most important is jangu, called ‘sweet rush’ in English. It’s an essential element of the traditional Balinese dish on our menu – base gede.

Coconut is essential in Balinese cooking. Are you a big fan?
I fell in love with the coconut 15 years ago while travelling around Asia and the South Pacific. I love its complexity, richness and depth. I love how something so simple gives us more than a dozen different products. Aside from coconut milk, cream, oil and young coconut, coconut sugar is amazing. We love smoking and barbecuing with coconut shells.

What’s your favourite cuisine?
That’s an impossible question. I’ve done a lot of travelling all my life and I love bold flavours. My first loves were American Southern and Italian cuisines. Then Mexican and French. But I don’t think I could live a happy life without a good pizza.

What’s the difference between fine dining and gastronomy?
They are not mutually exclusive. Gastronomy is about enjoying good food – selecting quality ingredients and treating them with love. That may mean transforming them into something completely new or, alternatively, keeping them as close to their natural state as possible. In the end, your enjoyment of a slice of raw mango at its peak or a complex beef rendang are both gastronomic experiences. Fine dining is about gastronomy served in a refined and rarefied setting.

What does cooking mean to you?
Cooking, for me, is about feeding people good food. I like your mention of the word ‘gastronomy’ because eating good food doesn’t need to be expensive or rarefied. The most important part of cooking is adding love. I like making everything in-house from start to finish. This way, everything you serve, whether simple or complex, can be delicious and beautiful. That’s sexy.

What’s the best thing you like about being a chef, then?
Eating and tasting all day long!

Finally, we live in Hong Kong. What’s your favourite local food?
Char siu bao. The new baked ones are delicious but I prefer a well-made steamed one. They’re a nostalgic comfort food for me – my grandparents live in the Bay Area in San Francisco, and they would order takeaway from the Hong Kong Flower Lounge when we visited. I didn’t realise they were actually from Hong Kong until I moved here. It had been 20 years since I’d had char siu bao! 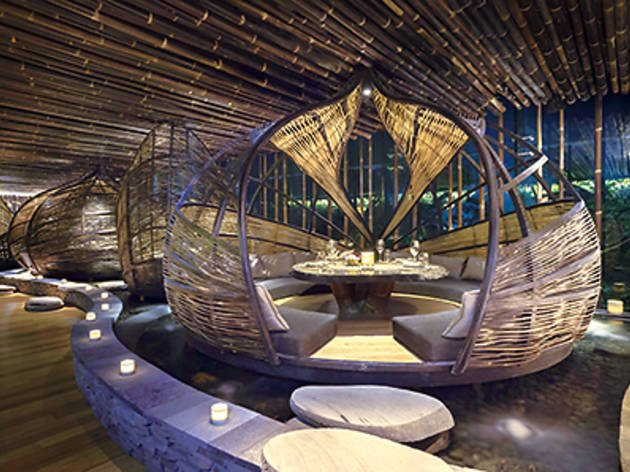 Balinese cuisine at The Pulse from the folks behind Bebo and Hotshot.