Restaurants Wan Chai
3 out of 5 stars 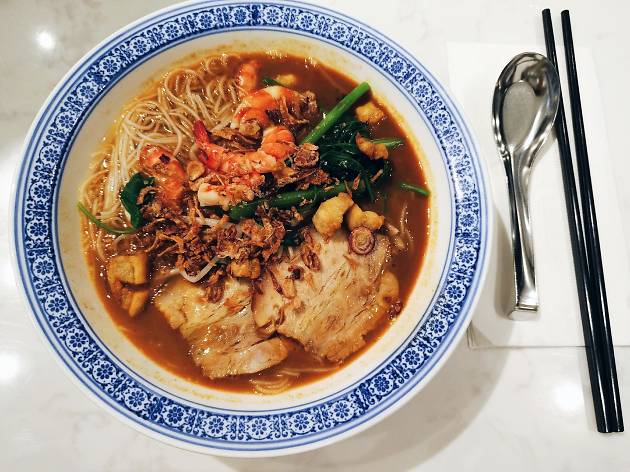 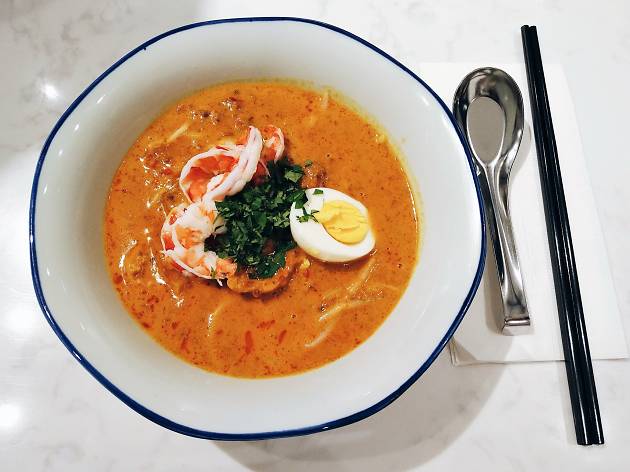 Offering the kind of fare seen on the streets of Penang or Malacca, Rempah Noodles is a noodle bar with plenty of taste. Fronted by full-length windows, the stark white space boasts only a handful of black stools, some clustered around a central marble table while others are designed as counter seating around the room and its open kitchen. Gorgeous fresh flowers grace the dining surfaces, which are also stacked with coffee table tomes penned by Southeast Asian authors. Among Kevin Kwan’s Rich People Problems and Sharon Wee’s Nonyan cookbook, you’ll find the restaurant’s menu – a single sheet of paper listing a scant few items.

Named after the Malay word for spice, Rempah Noodles touts bold punches of flavour in all its dishes. The laksa lemak ($98), for example, arrives in a gravy-like soup fragranced with lemongrass, garlic and chilli, among other herbs and spices. It’s a heady concoction, rounded out slightly with the addition of coconut milk. Everything served in this soup is designed to support it – from the thick and al dente rice vermicelli to the shredded chicken and beancurd puffs that sop up the flavours.

Similar to the laksa, the broth for the premium prawn noodles ($98) is the soul of the dish. The soup gets its deep-brown hue and near-smoky savouriness from simmering pork bones with prawn heads and shells. Garnished with deep-fried pork lard and caramelised onions, the soup is impressively intense at first but overwhelming after a few more sips, especially if paired with thin and delicate strands of rice vermicelli. Opt for the thicker egg noodles instead, which hold up better against the soup.

Noodles aside, the only other food item is the pie tee ($80/six or $40/three), a popular Peranakan snack comprising julienned carrots, jicama and dried beancurd in a deep-fried pastry cup. These one-biters are topped with a prawn each, as well as a sprig of coriander and a dollop of sambal. Crisp and fresh with just a touch of heat, these are a great way to start the meal before delving into the fuller flavoured mains mentioned above.

Overall, we appreciate Rempah Noodles’ efforts to celebrate the richness of casual Nonya cuisine, but there are some consistency and operational issues that plague its performance. Certain items and ingredients run out quickly and, having tried the laksa twice, one had a noticeably thinner broth than the other. If the kitchen can fix these problems, it might become a noodle bar that tastes as good as it looks.