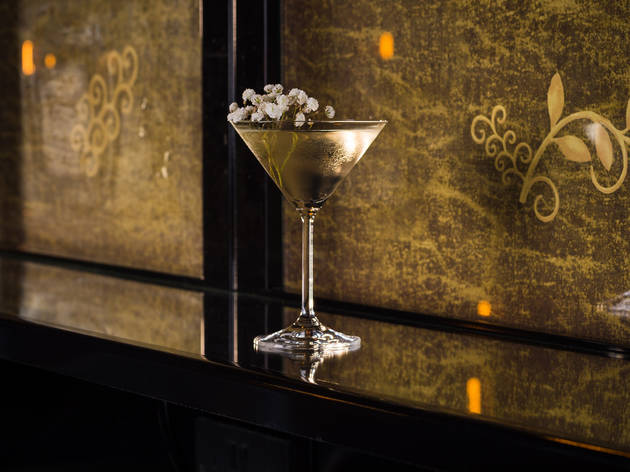 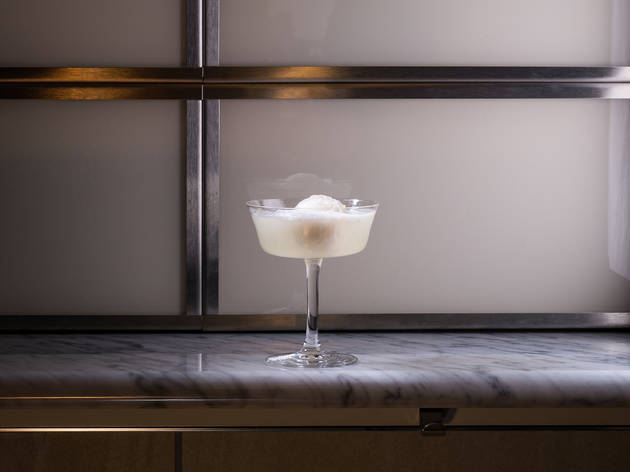 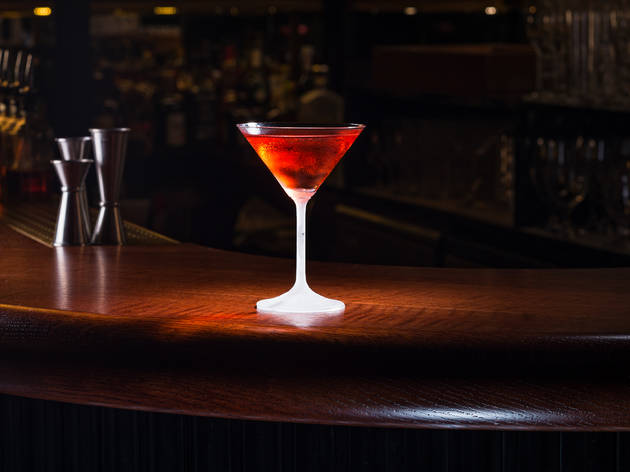 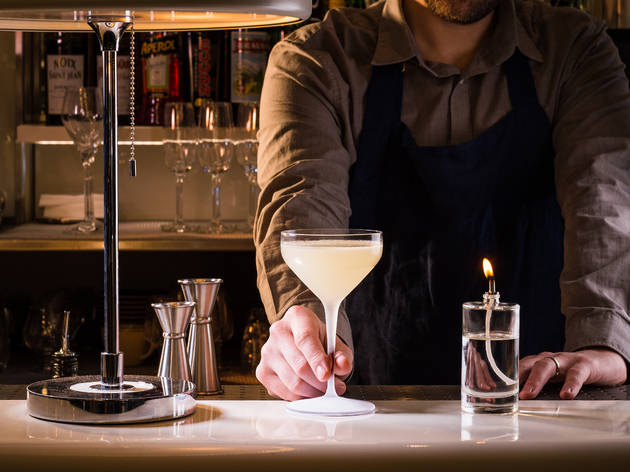 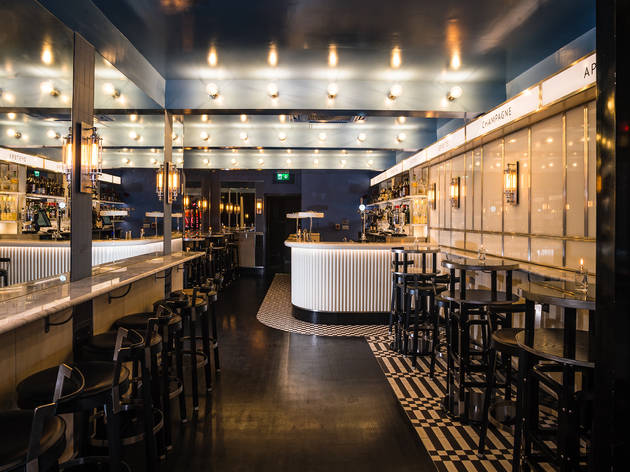 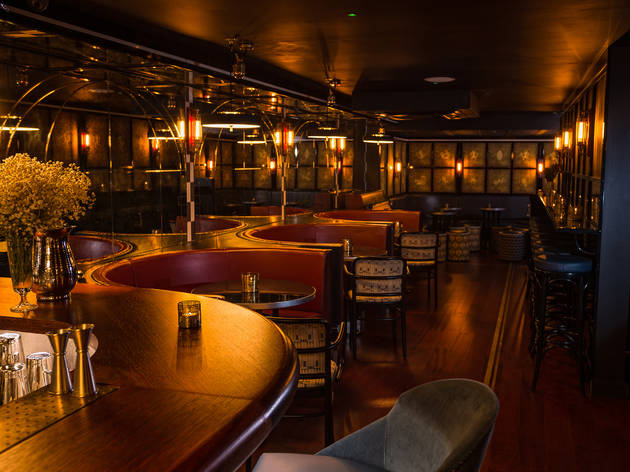 An accomplished bar with a split personality.

From the couple who brought us cult faves Nightjar and Oriole comes Swift, swooping into the former site of the celebrated, groundbreaking Lab Bar. Frankly, if they’d named it Tit I’d have still been excited, since here they’ve also teamed up with folks who’ve worked across Milk & Honey and Callooh Callay, to overwhelming success.

Swift is split in two: a buzzy, casual-yet-sparkling bar on the ground level and a dark lounge below. Upstairs, the look is faintly Italian, mirrored in a menu of affordable aperitivos. This includes an unmissable sgroppino – a thick and frothy prosecco-based drink with lemony sorbet floating on top. For snacks, nearby drinkers ordered oysters, but I was happily ensconsed in a Guinness welsh rarebit, heavy with pungent cheese and onion.

Pongy titbits notwithstanding, Swift makes a great date spot. If it’s going well, take it downstairs. The basement is lit for romantic trysts, the showy side of Oriole and Nightjar eschewed in favour of pared-back sophistication. Staff are attentive, guiding you through an original menu edging towards nightcaps. I tried a powerful Amber Cane, a reinvented manhattan using rum in place of whisky.

So taking over the spot where London’s cocktail-making reputation was cemented doesn’t seem too bold. Doing it in such a stripped-back way was the ballsy move, but, boy has it paid off. Time for a Swift one.

I liked it at Swift. We didn’t get a reservation downstairs but we managed to nab a table upstairs on the stools. At first glance, it appears quite clinical - lots of white walls and mirrors, but once you get to know the bar you realise that it suits that. The staff were friendly and attentive and the cocktails were tasty. It is somewhere if I was in the area I would take clients for a pre-dinner drink. It lacked cosiness and it was quite expensive but what cocktail bar in central London isn’t these days?

This unassuming little bar is a stone's throw away from Leicester Square (and right next to my fave sushi at Eat Tokyo!) making it the perfect spot for a post-theatre or dinner drink. The cocktails are delicious and reasonably priced for this part of London. I really enjoyed the sgroppino cocktail with lemon sorbet - it had a definite Gatsby vibe. My friend tried a Kew Gardens cocktail and it SMELT of spring! Delicious - would recommend.

Downstairs at Swift there's a laid-back vibe, with a diverse collection of whiskeys to choose from, as well as some incredibly creative cocktails . Not to mentioned some tasty small plates. I would definitely come back here! Ideal spot for a date night or fancy after work drinks.

There’s almost a dichotomy of atmospheres at Swift - ground level reminds me of the neon overtones from Blade Runner while downstairs is moodier, with a film noir like tinge of Tokyo by night. The service here is always friendly and attentive, which allows you to ease into your surroundings. They do get awfully busy, so make sure you’re in early or that you’ve made a booking. I always prefer to sit at the bar as it’s all part of the experience; however those cosy booths downstairs allow for more intimate conversation. The oysters are moreish, the cocktails strong, well balanced and flavoursome and the bar menu is short; but has enough to sate your appetite, so don’t forget to bring great company - sit, chat, sip and before you know it, you’re well on your way into the nights’ embrace.

Tip: make a booking if you can as they get very busy and there are often lines; downstairs will also have a different menu to upstairs.

This place used to be the iconic LAB (as in London Academy of Bartenders), briefly rebranded as Academy (didn’t stick). Now it's Swift and the ownership has changed. LAB was the first proper cocktail bar I was taken to when I moved to London in 2008, and I still have fond memories of its passion fruit cocktail Solero. I am certainly sad to see it go. The good news is Swift seems to have kept its mixing credentials throughout its reincarnations. And the bouncer (still not sure why they need one to start with). We sat in the upstairs bar (there's also one downstairs). The new upstairs design is modern but with clear Art Deco inspirations, and the marble top tables are just wonderful. The upstairs drinks menu is very short (the LAB's menu, on the other side, was plain extravagant with around 100 cocktails listed). They serve small bites nowadays too.

I went for a Bloody Mary which was beautifully mixed and really well shaken rather than poured over ice. The prices are also very affordable (£9-11 for well mixed drinks in a prime spot in Soho), all accompanied by nice and welcoming service. Our waiter brought us water straight away and kept us hydrated throughout the night.

So it really was surprising that this little gem of a bar was half empty on a Friday night (we walked in unplanned after a musical in the nearby Shaftesbury Avenue and had our choice of a table). Please please people let's keep this place open! I am very concerned, as it really is a great combination of price, quality and service.

I came into Swift with high hopes. We got a reservation to the downstairs whisky bar which in photos looked very cosy and warm. Unfortunately it didn't translate over when I visited it in person. However, the proof is in the pudding-- and seeing as how this is from the people they brought us Nightjar and Oriole, I was hoping this would be it redeeming quality.

The drinks were good, don't get me wrong, but they did not hold up the the creativity that is Nightjar. For the price we paid I was expecting more. Maybe I am not a good whisky drinker (which is what the downstairs bar specialises in). Maybe I should have stuck to upstairs. To be fair, if you wanted something 'off menu' they were more than happy to oblige and the staff was very friendly.

Bar Swift is quite a find, seemingly unassuming amongst the bright lights of Soho but very beautifully decorated inside. The upstairs bar is a light and fresh bar and the drinks were perfectly mixed. Downstairs is plush, beautiful and packed with booths. With a good whiskey menu and the air of being "tucked away", its all the fun of a speakeasy. Highly recommended!

This was a super nice surprise, I really did not expect to find downstairs the bellisimo sexy bar with a different clientele than you normally find in Soho ... I do not want to put a lot of my personal touch, experiences, but it is really a beautiful place to have those perfect Cocktails with a personal touch, and of course even better with the perfect company ...

If a Timeout did percentage ratings, mine would be 100% for Bar Swift.

I stumbled upon this bar accidentally, before they'd opened, whilst looking for another bar in Soho. I tweeted them immediately (as my surname is Swift) and Bobby invited me to their soft opening back in December.

It has an innovative design the upstairs bar is a quick service cocktail bar with funky lighting and an excited buzz. Whereas downstairs has a warm glow of speakeasyesque (if I can get away with that), a whiskey list with over one hundred entries and a live pianist adding to the ambience. The cocktails are sensational, the whiskey list is extensive, the staff are charming and helpful, the guys in charge: Mia & Bobby are regularly serving, mingling and catering to your every cocktail need.

I used to have a favourite cocktail bar, I now have Bar Swift.