This month sees the opening of Picturehouse Central, a new seven-screen cinema carved from the remains of the little-missed Cineworld Shaftesbury Avenue in the old Trocadero centre. For many, ‘Trocadero’ was long a byword for West End nastiness – tourist-trap arcades, cheapo shops and endless escalators. But the Picturehouse cinema chain has now brought style and substance back to a building that first opened in 1896 and has its roots in late Victorian and Edwardian glamour.

We took a hard-hat tour of the venue with Clare Binns, a Picturehouse veteran and director of programming and acquisitions at the Cineworld-owned chain. Join us for the tour below…

RECOMMENDED: The best cinemas in London 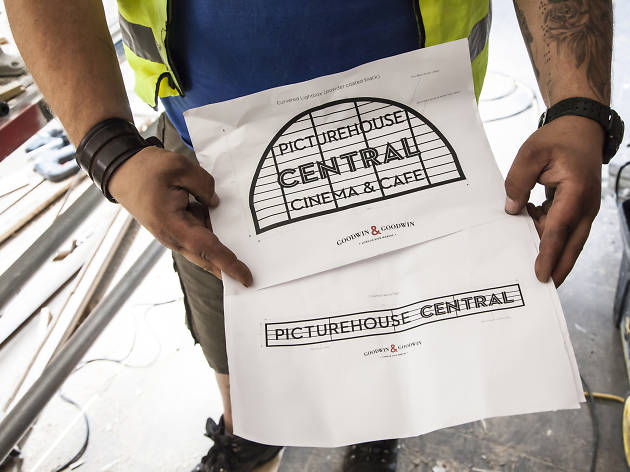 The old-school marquee above the entrance wasn’t ready when we visited. But a kindly builder modelled the designs for us – as long as we didn’t show his face for tax reasons (joke). 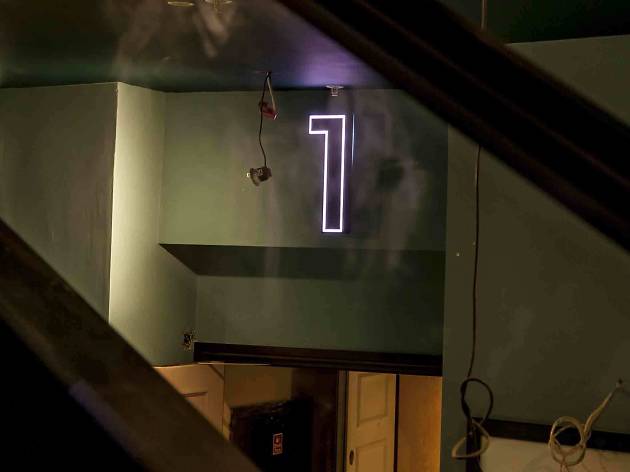 ‘It’s important to say this is a cinema, not an entertainment venue,’ says Binns, whose clear mantra is film, film, film. Yes, she says, there’s ample space in their new flagship venue to eat and drink as well as to watch movies – but the Central (we’re calling the nickname) is ‘not just about food and drink with a film on the side’. Take that, ‘boutique’ cinema. 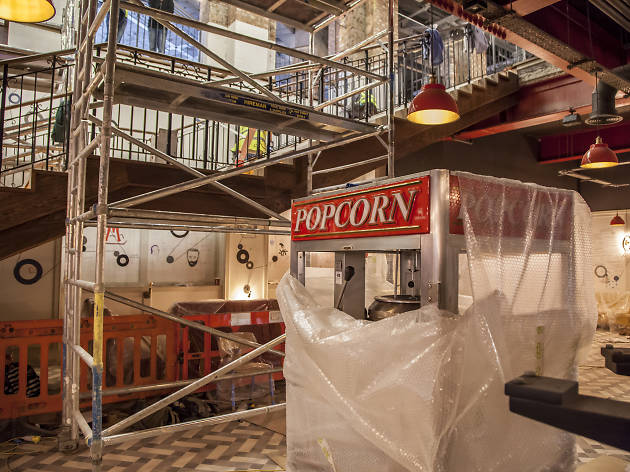 The old Cineworld Shaftesbury Avenue was reached by a near-hidden street-level escalator that felt like it was delivering you into the bowels of hell. The Central has a grand new entrance on a collonaded side street between Shaftesbury Avenue and the beginning of Haymarket. It leads into a big café area – the popcorn machine was ready and waiting when we arrived – and there’s a grand new staircase leading up to a first-floor lobby where they’ll sell tickets and offer more food and drink. 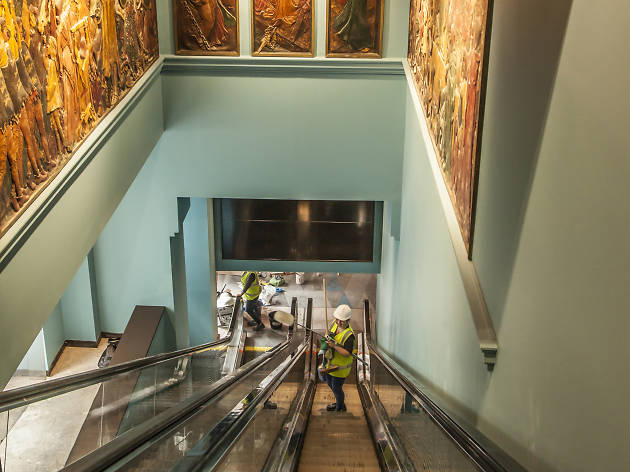 And from the first-floor ticket area, you’ll be able to reach the Central’s seven screens (the same seven screens as before) via the same two escalators that graced the old Cineworld Shaftesbury Avenue… 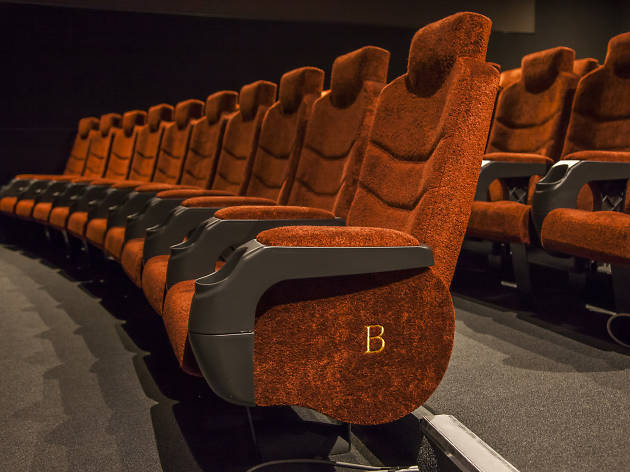 …only now every screen has had a complete overhaul, complete with fancy new seats made from material that looks suspiciously like the cloth of a comfy old dressing gown (in a good way). 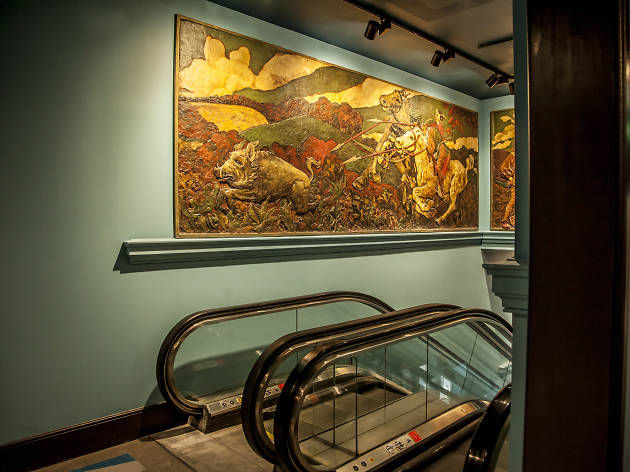 The Central has given pride of place to the listed Arthurian frieze that used to sit in the hallway of the fancy restaurant in the same building in the early 1900s. Only this striking series of images is now properly lit and showcased. 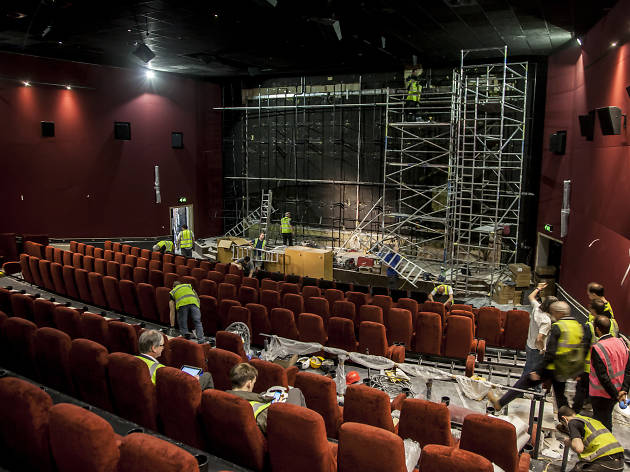 The biggest screen at Picturehouse Central is the impressive Screen One. It has 344 seats and when we visited they were still fitting high-end speakers and preparing to hang a fancy new curtain. Binns hopes this screen will become popular for satellite Q&As, premieres and other special events – as well as serving everyday filmgoers. ‘Everyone’s been waiting for a Picturehouse in the West End,’ she says. She’s especially proud that both the London Film Festival and Sundance London will use the cinema as a venue. 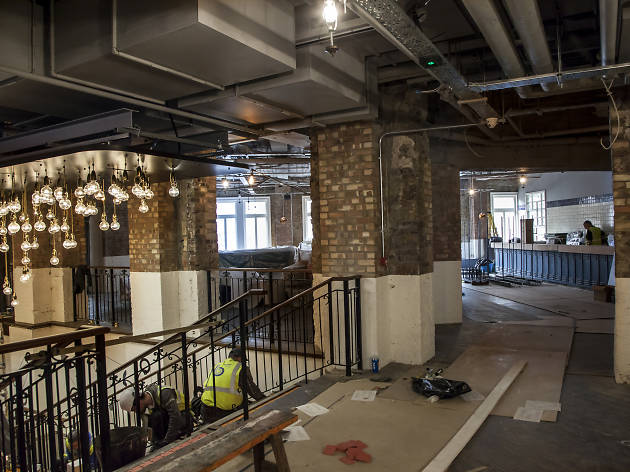 Hungry? Thirsty? Just need a sit-down? The Central has you covered. There are two bars, a café, a restaurant, a members’ bar (not opening till late summer) and loads of space to kill time before and after films. 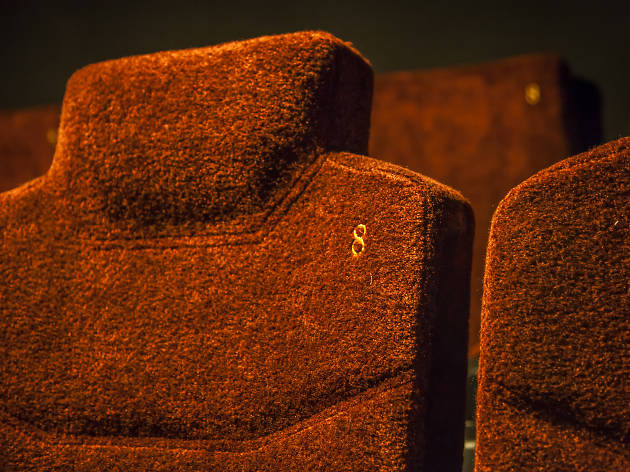 The first films that will be shown at the Central reflect the variety of the programming: ‘Jurassic World’, ‘Entourage’, a re-release of ‘Freaks’ (1932), the award-winning doc ‘The Look of Silence’ and screenings as part of the Open City Documentary Festival. 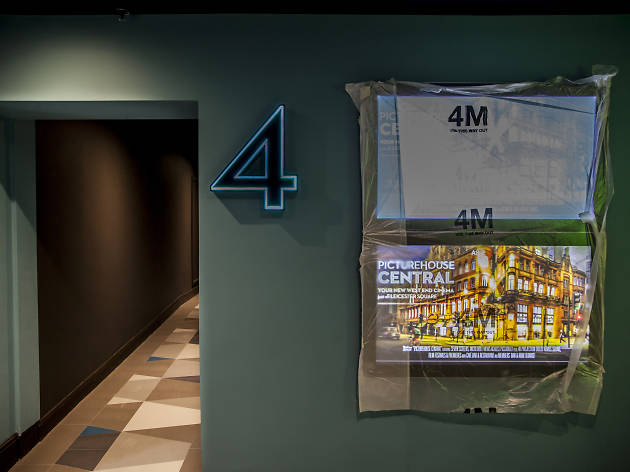 So, where, in audience terms, will the Picturehouse Central sit between the Curzon Soho and the Vue West End, two cinemas about the same distance from the new venue? ‘Where we always sit,’ says Binns. ‘Picturehouse offers the best of everything. We’ve no shame in showing “Mad Max: Fury Road”, but we’ll also show something great by someone who’s previously made art installations.’ Binns is adamant that the Central will support films not always well-served in the West End, and keep them playing for a decent length of time – ‘films that normally disappear quickly from screens.’ 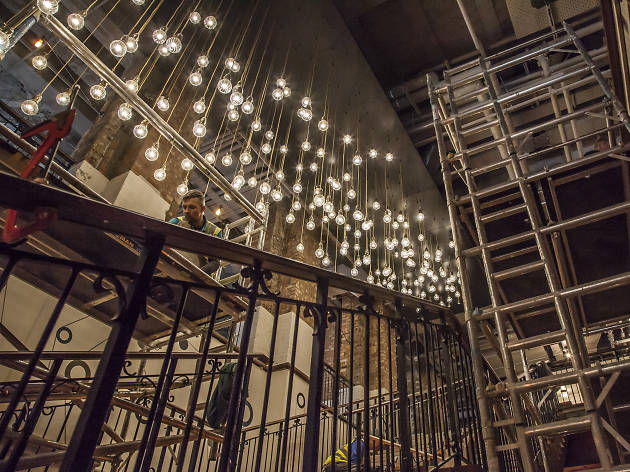 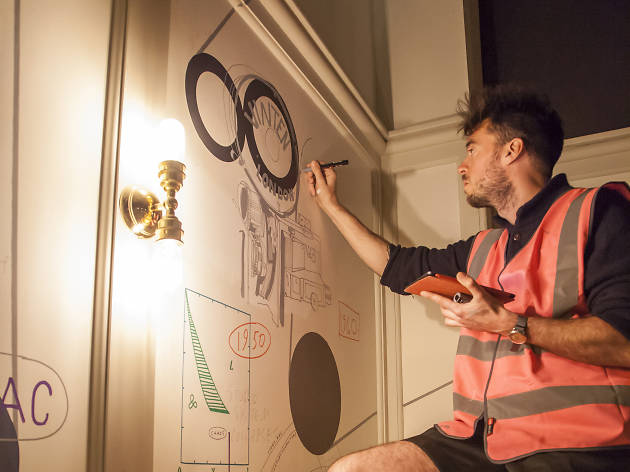 During our tour, the artist Patrick Vale was putting the finishing touches to a huge mural that covers loads of wall space on the ground floor. It takes a light-touch look at various decades and genres of cinema… 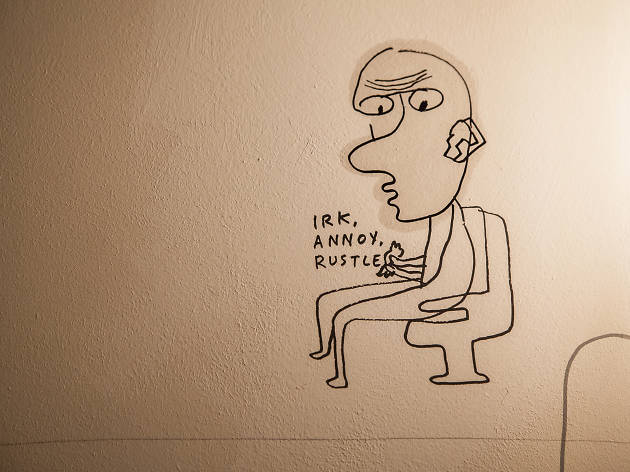 …and takes a dig at anyone who annoys other film-goers. We’re watching you. 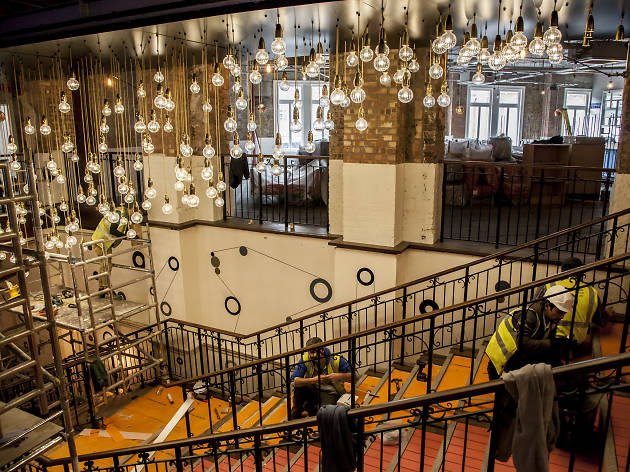 So how much will it cost? Well, that depends. If you’ve got a Cineworld Unlimited card you’ll be able to use it here, but only after paying an extra £2 per ticket (unless you’ve got the snazzy ‘West End’ version of the card already). The most expensive tickets will cost £18 to non-members on Saturday evenings (ouch). The cheapest tickets will cost only £5 (but that only applies to documentaries).

While the doors fully swing open on Friday June 19, the venue will be accessible to the curious (complete with a few screenings) in the few days preceding that. 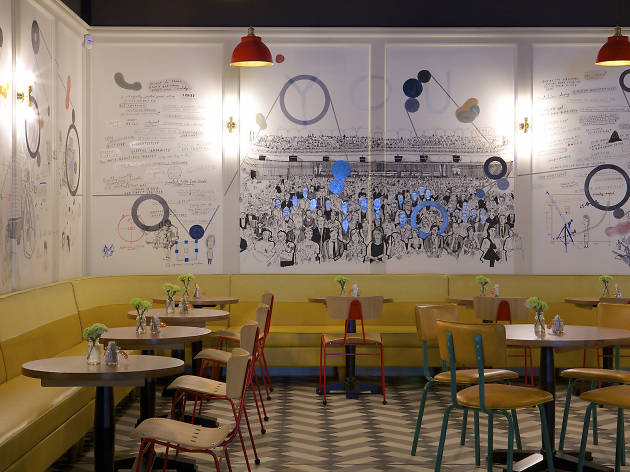 And here are a few shots of the finished product. Happy viewing! 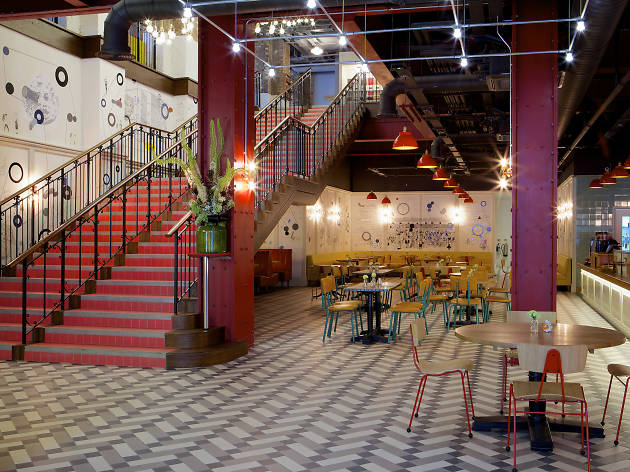 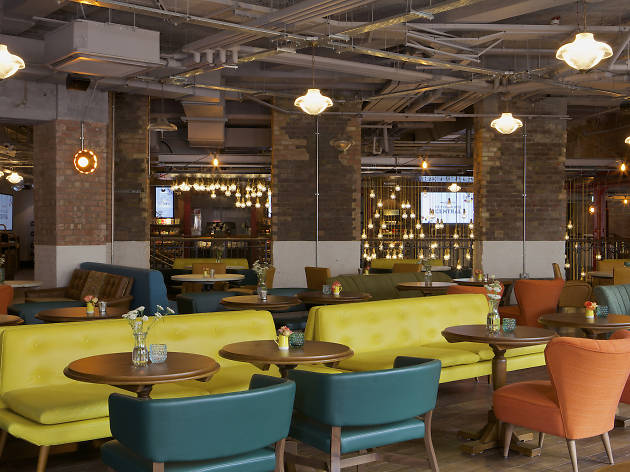 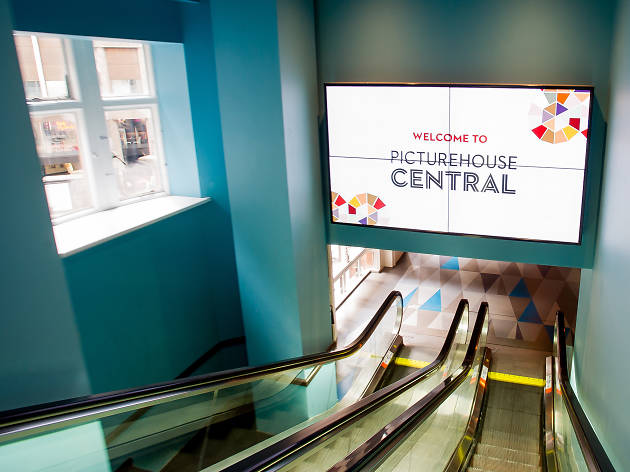 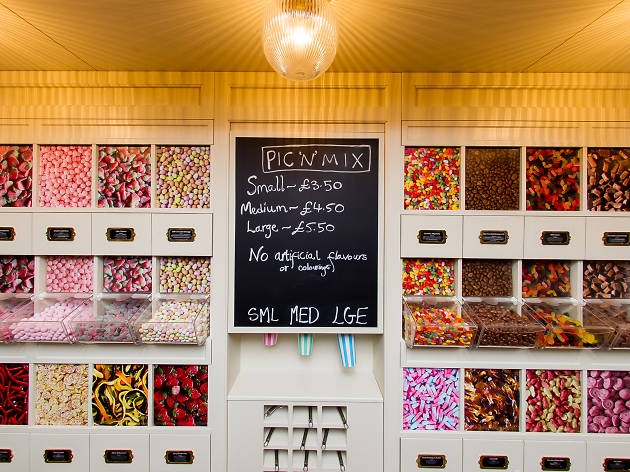 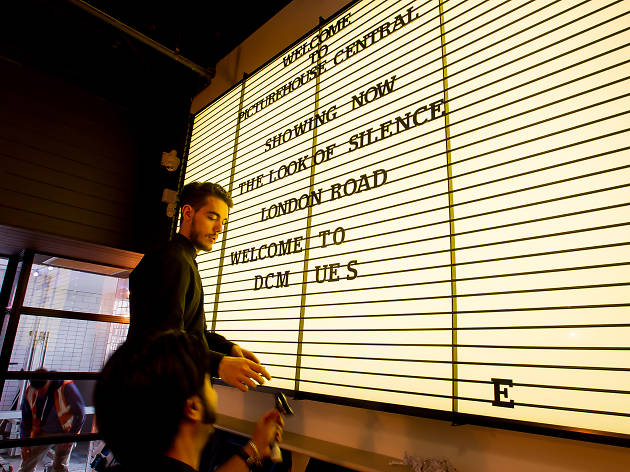