Time Out’s 100 best dishes of 2018 have been revealed. We count down the top seven with the people who created them for the inside scoop on how they make the dish one of the best in the city. Expect vibrant salads, heaps of spice, loads of texture and... brains. 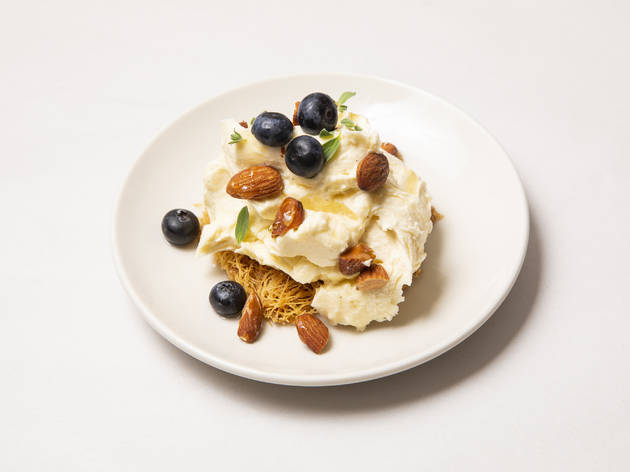 ‘The base is made of kadaif pastry (thin, long, angel-hair strands). The dish is plated up when it’s being served so the pastry stays crisp. If it was pre-assembled, the layers would meld together and the texture would be completely different.

‘The cream is made with very good Greek honey, creamy feta, vanilla, cream and sugar. Salted almonds, marjoram leaves and blueberries are added on top as a final finish.

‘Marjoram leaves have a perfumed, sweet flavour. They’re hardly ever used. It’s special because it’s somewhere between mint, oregano and thyme. It reminds me of the mountains in Greece or Israel. 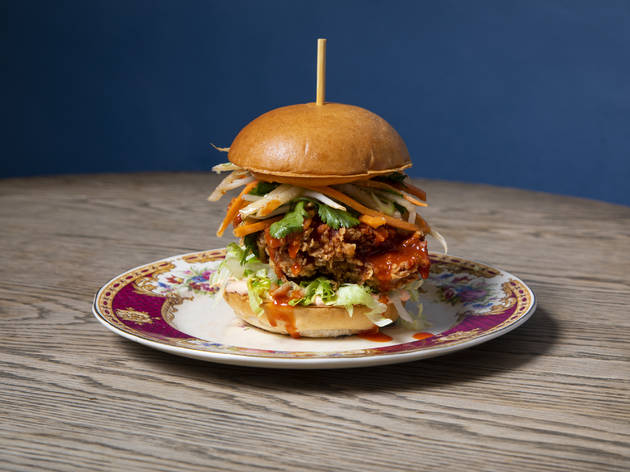 ‘When the restaurant first started, this was the only thing we did. I wanted to create the ultimate flavour bomb. It should make you think: “Fucking hell, what’s going on in my mouth? This tastes incredible!”

‘We cook the chicken in rapeseed oil as that gives a crisper product. We also use a pressure cooker instead of cooking it over open fire. This cooks the meat from the inside out, with all the moisture retained, which keeps the chicken really juicy. The difference it makes is phenomenal.

‘Getting the right level of acidity is a science; from the sriracha and sour cream to the chilli vinegar. You need heat, the crunchy chicken crust, the soft bread, the fresh bamboo shoots, carrots and mooli… and the spicy, zesty dressing – it just really works.

‘Although the burger’s called the K-pop – which lends itself more to its Korean roots – elements in the sauce are borrowed from other cuisines: there’s Thai nam jim dressing and sriracha in the sour cream as well as gochujang chilli paste and chilli vinegar.’ 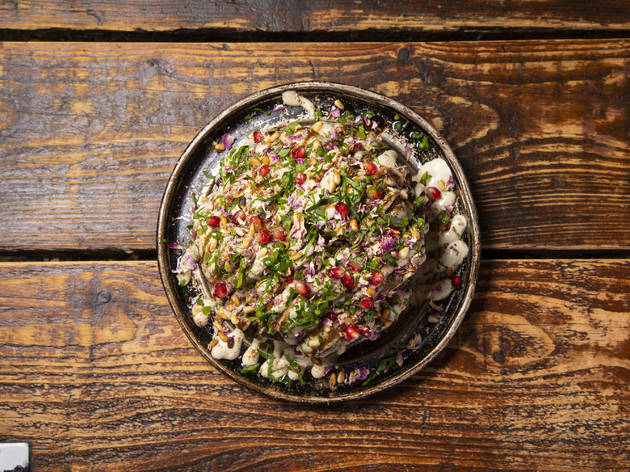 ‘The inspiration for serving a whole cauliflower was taken from a restaurant I visited in Israel. The chef was all about the purity of ingredients. It made me think of how just drizzling cauliflower with good olive oil, adding a sprinkle of salt and roasting it can allow you to really appreciate the vegetable.

‘I like the idea of communal feasting; serving large platters that friends can share. Serving the whole cauliflower reflects that ethos. It’s a dish that everyone can come together for.

‘The spices we put in the rub for the cauliflower are akin to the sort we’d put in one for lamb: a baharat spice mix that includes allspice, cumin, nutmeg, cinnamon and sumac. We feed that through the butter then slather it on top of the cauliflower.

‘We smother the cauliflower in tahini. The flavour works really well. It’s got this buttery nuttiness to it. We then brush it in butter, which adds a richness as it roasts. Slathering it with the tahini adds a really moreish taste.

‘Pomegranate seeds bring a burst of freshness and a pop of colour. Green chillis add spice, pine nuts add crunch and rose petals add pleasing flecks of pink. We use high-grade pomegranate molasses and some balsamic vinegar to cut through the buttery richness of the dish.‘ 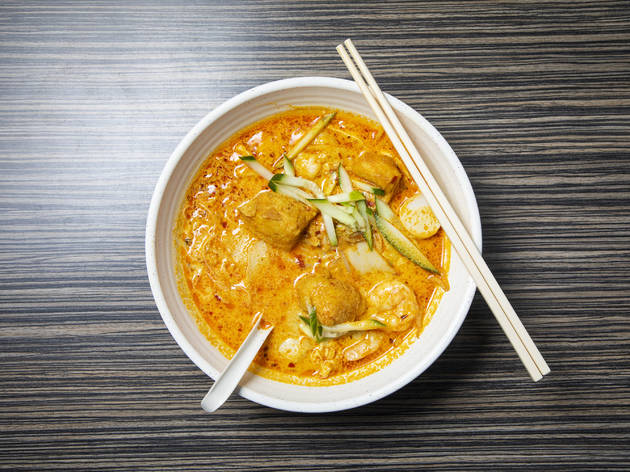 Rachel Chung, the daughter of owner Rosa, explains how this laksa’s roots lie in a family recipe

‘Our laksa is seafood-based because my mum, Rosa, is from Johor, which is in southern Malaysia, right next to Singapore. The town is near the sea and so seafood, like prawns, is mainly used as the base of the laksa there.

‘The key to the curry is homemade laksa paste made from a spice mix. We follow a secret family recipe using a mix of spices and fresh herbs. A broth is then made with coconut milk, palm sugar and essential seasoning at the end.

‘Egg noodles are sometimes used for laksa but rice vermicelli are my mum’s favourite.

‘Laksa wouldn’t typically include cucumber, but Rosa’s husband felt the dish needed an injection of colour so we’ve always put fresh cucumber on top of each bowl: our own C&R tradition.’ 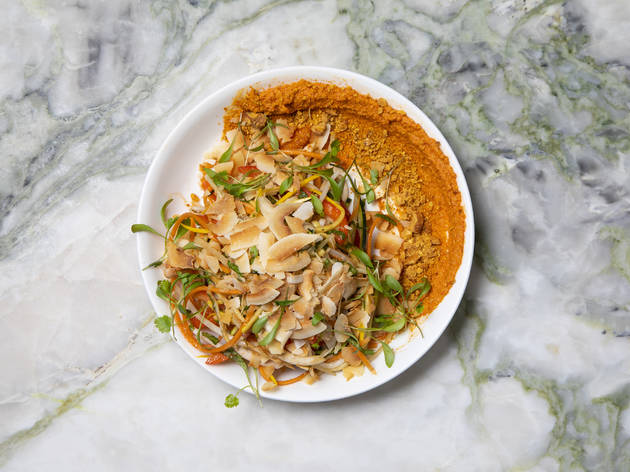 Head chef Madeleine Haysey says that the fresh, raw ingredients of this dish remind her of California

‘The dish is bright and colourful. It reminds me of cooking by the beach in Malibu. I spent months out there taking inspiration from the dishes. It’s my favourite dish.

‘The idea of this dish is simple: to use fresh and raw ingredients, and be as creative as we can with them. It’s composed of green and yellow courgettes, red peppers, bean sprouts, young coconut and red onion. They’re mixed through with fresh mint and coriander. It’s made to order.

‘The salad is tossed with toasted coconut flakes, coriander and deep-fried cashew nuts. A blend of curry powder and paprika is sprinkled on top. It adds a level of spicy crunchiness.

‘We use a dressing made from tamarind, agave and tamari, which adds sweetness.’ 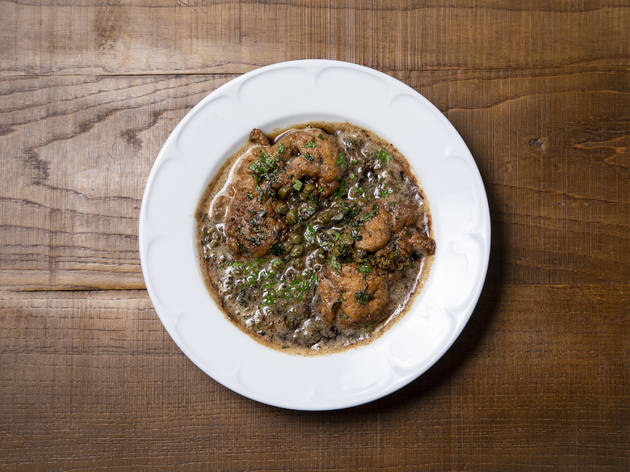 ‘The brains have to be spankingly fresh. The preparation is a delicate process: they’re soaked in salted water, the membrane is gently removed, then they’re poached and chilled. After dusting them with flour, we pan fry them with butter to achieve a nice crust.

‘The toasted exterior combined with the gorgeous, delicate creaminess in the middle… It’s almost like biting into
a Tunnock’s tea cake.

‘Black butter is butter that’s almost burnt but doesn’t taste burnt. It has a lovely nutty flavour. You’d think adding more butter would make the dish heavy, as the brains have a high fat content; that’s where the capers come in – they really lift it.

‘Red wine vinegar adds a sharpness and acidity to the dish, which is key. Also, freshly chopped parsley: it’s such a great herb and it brings a real savoury flavour to anything you put it into. It’s a really important element.’ 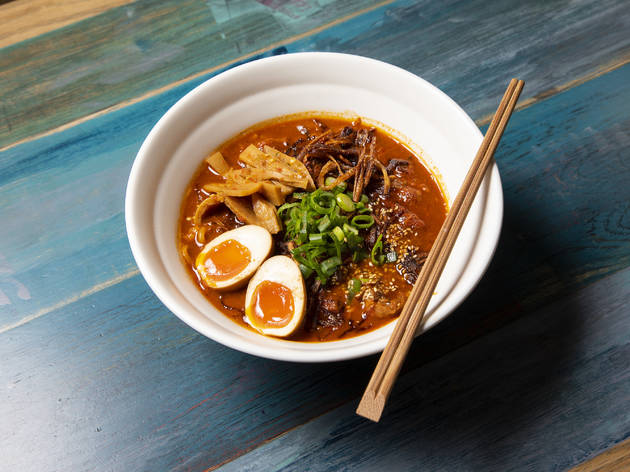 ‘I wanted to do a curry goat ramen as a homage to Brixton, starting with a traditional Jamaican recipe. A Sri Lankan sous-chef, who tasted it, said that he could make a better curry, based on his mother’s recipe. So he did, and it was better! We season it with Korean chilli paste and it’s garnished with other things inspired by Brixton Market.

‘Initially the dish was served as tsukemen, with the noodles separate from the curry, to be dipped in the broth. People didn’t really know how to eat it, so we turned it into a ramen dish. Then people complained it wasn’t soupy enough – and they were right! That’s how we came to call it “ragù-men” because you eat it like a bowl of pasta with meat sauce.

‘Inspired by the dried-fish powders you get in Japan, we mix Japanese katsuobushi [dried and smoked skipjack tuna] powder with West African dried and smoked prawns, which we roast and grind to dust. The result is an incredible umami seasoning that adds depth.

‘The bamboo shoots are pickled in puréed scotch bonnets so they’re extremely spicy and aromatic.

‘It is a very unusual dish with a lot of weird stuff going into it from all over the place. But somehow it works beautifully. It’s probably the dish I’m most proud of.’