In a fast-paced city like London, the landscape is ever-changing but one thing that keeps the city grounded is its wealth of corner shops. Familiar and reliable with a steady stock of chocolate and booze, your relationship with your corner shop is probably one of the longest and most stable ones in your life.

Though, where ever you are right now, there's a corner shop almost always a stone's throw away: no two newsagents are the same. What they lack in glitz and glamour, they make up for with their own little quirks and charm. We asked some London newsagents what makes their corner shops stand out from the rest.

‘If customers are rude, I tell them to go to Tesco’ 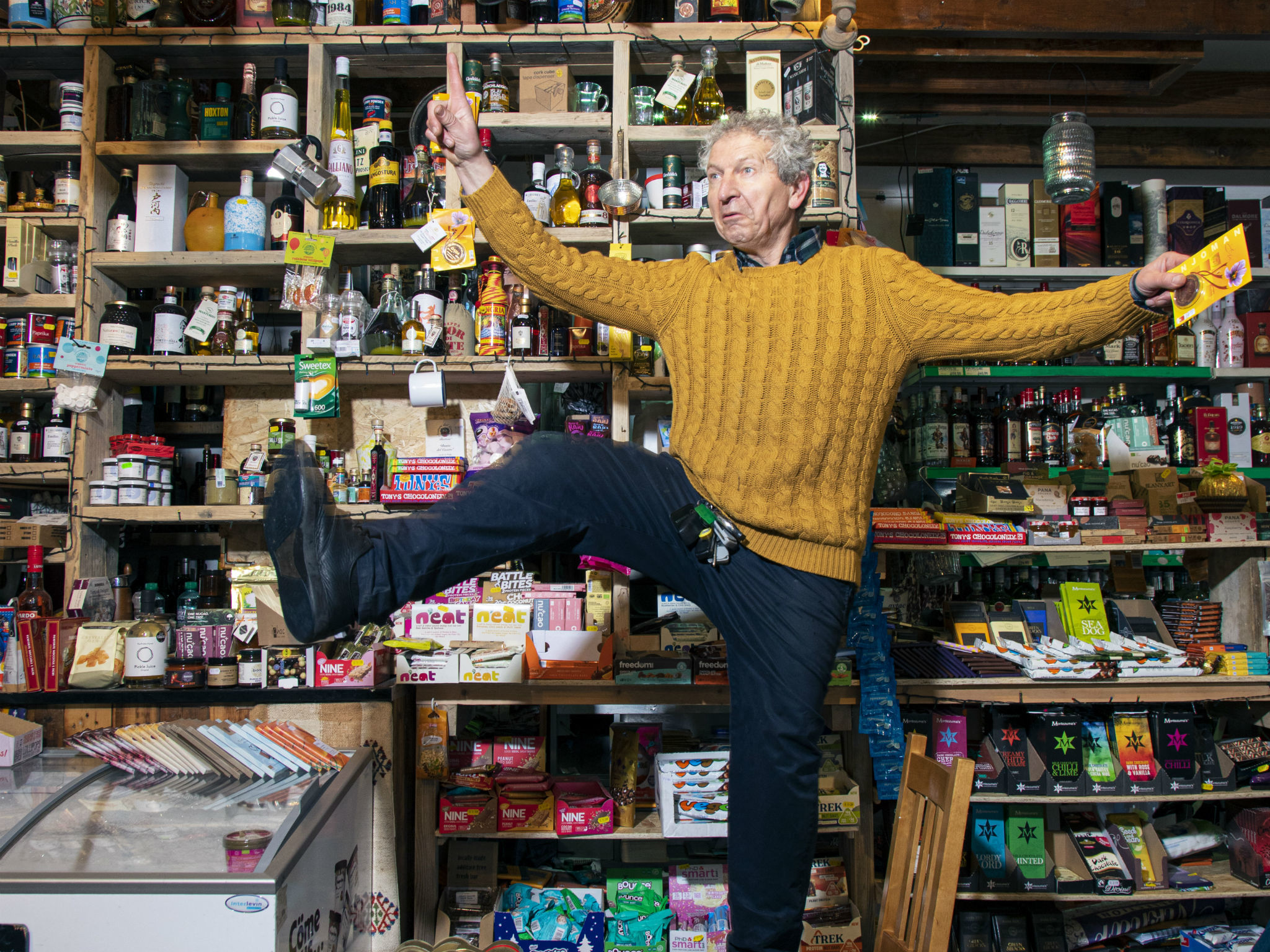 Abdullah Folak has owned Palm 2 in Clapton for 25 years

‘When Tesco moved in next door ten years ago, I thought it was the end for my shop. They tried to buy us, twice, but instead of closing, we decided to change the business. Now, our corner shop is a bit different from your regular one. We stopped selling cheap beer and decided to focus on selling artisan foods. One of the weirdest things that people buy from us are hammocks. We have them hanging up from the ceiling and people come in and buy them in summer. If people get locked out of their houses, they’ll often come into the shop and ask to borrow one of our ladders. We’ve been here for such a long time, I think they see us as more than a corner shop.

‘My favourite customer is this guy who fancies himself as a bit of a poet and he always reads his poetry out to me. He likes to sit and write it in the shop. We also have a lot of older regulars. One lady – I call her ‘young lady’ – she’s in her eighties and she comes in three or four times a week. She buys tea and a jam doughnut and sits down to eat it. If you offer to help her with her shopping, she gets really annoyed. She’s been coming in for around 20 years. Rude customers are part of the job. Sometimes they say ‘but this is cheaper in Tesco’ and moan about the prices. I tell them to go there, then. It’s only next door. ’

‘Our shop is porn-free’ 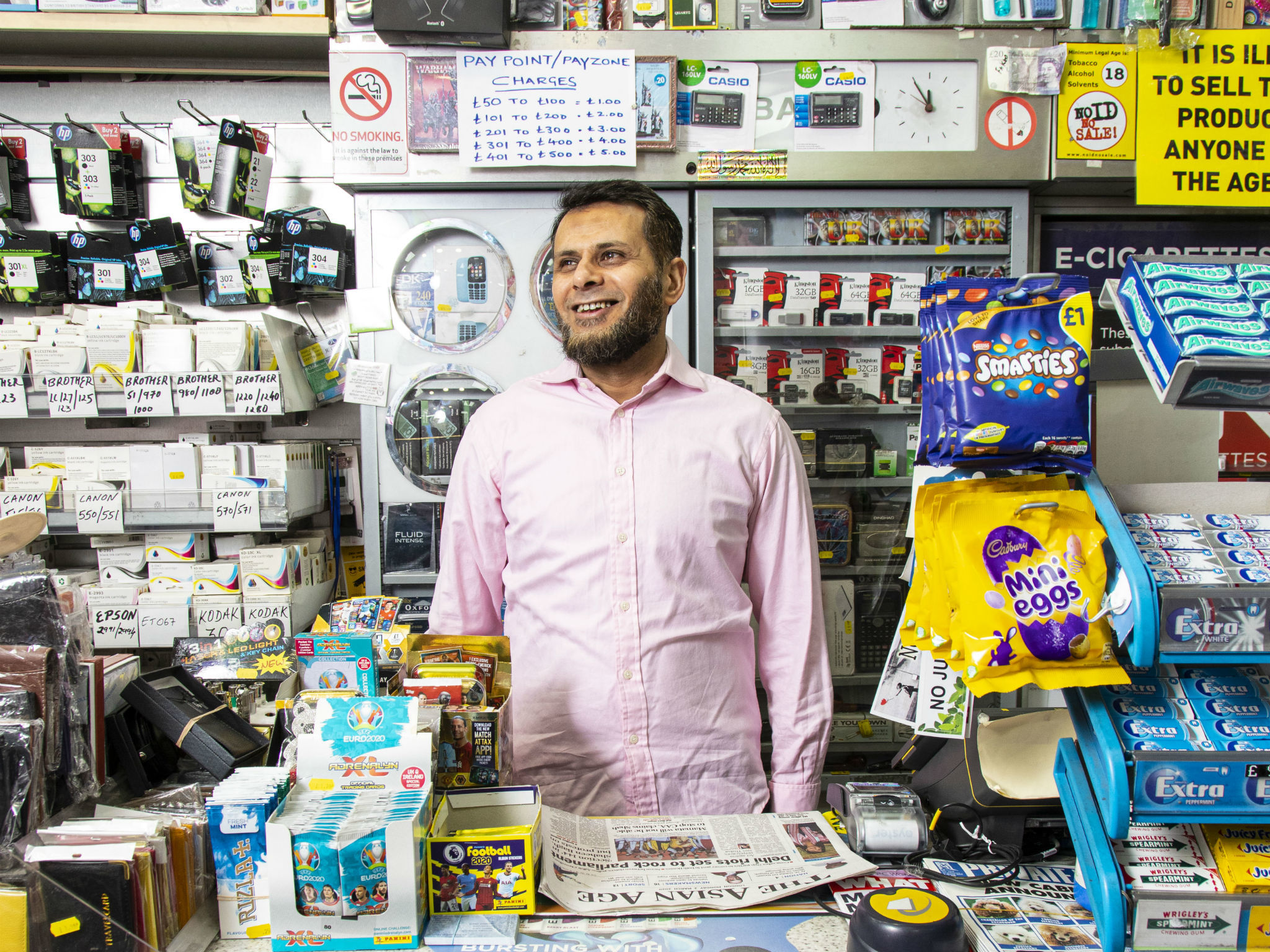 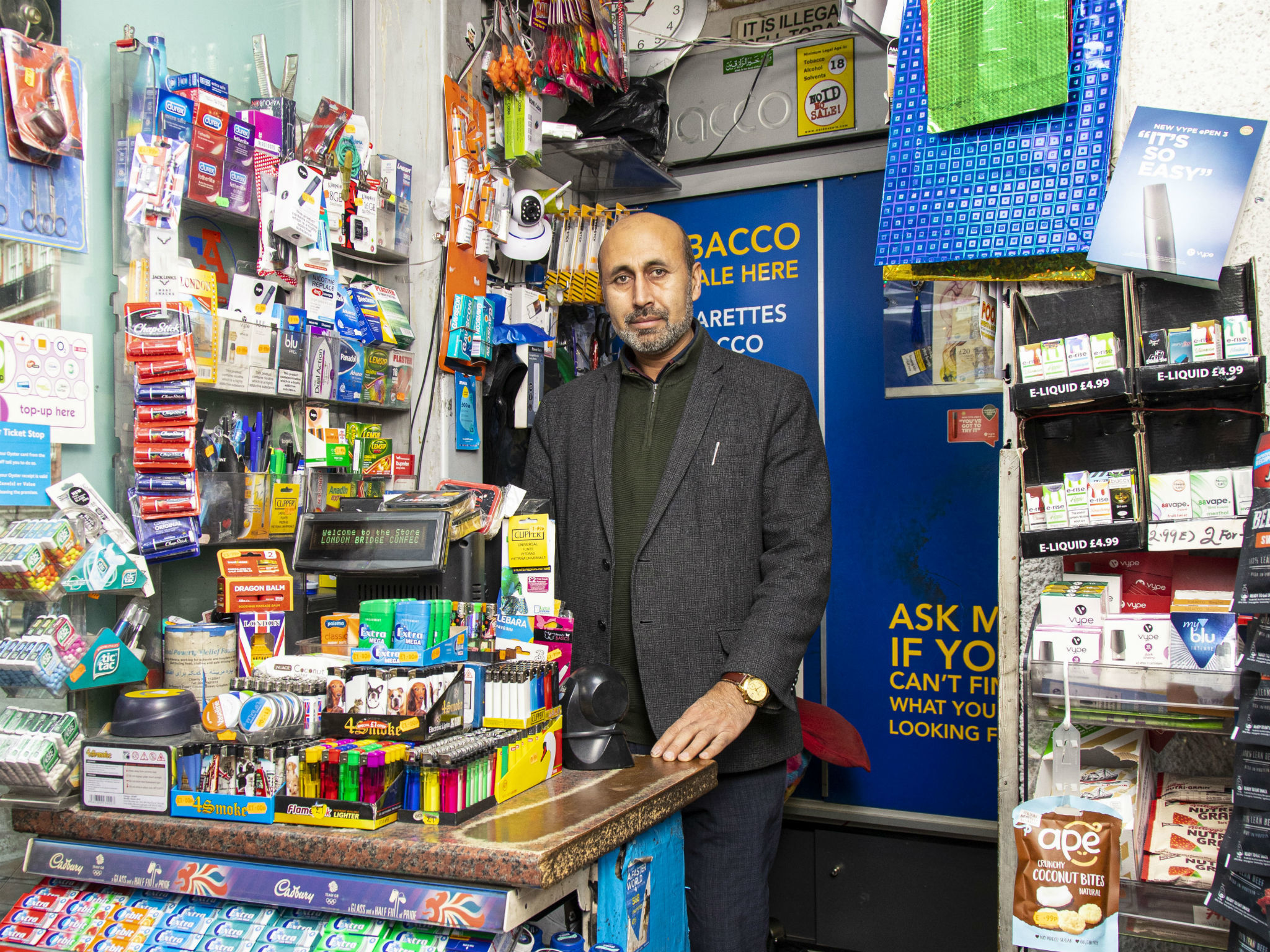 ‘I’d love to pass my shop on to my children, but I don’t know if it will be here in five years’ time. Two years ago, I was 80 percent certain I would lose the business. When The Shard was built, the rent on the shop jumped a huge amount. The most annoying thing about the job is tourists coming in asking where The Shard is. We’re right next to The Shard, you can’t miss it. And they constantly ask where London Bridge station: we’re inside it. But it’s part of the job.

‘Drunk people who’ve spent all day in the nearby pubs also cause mayhem every weekend – shouting, singing, running around. I just say to them: ‘Thank you very much, see you again soon.’ The biggest thing I’ve learned from working in my shop is English. I came over from Afghanistan in 2000, and couldn’t speak much at all. It was hard to understand the customers. But now I’m fluent. I even know some sign language.’ 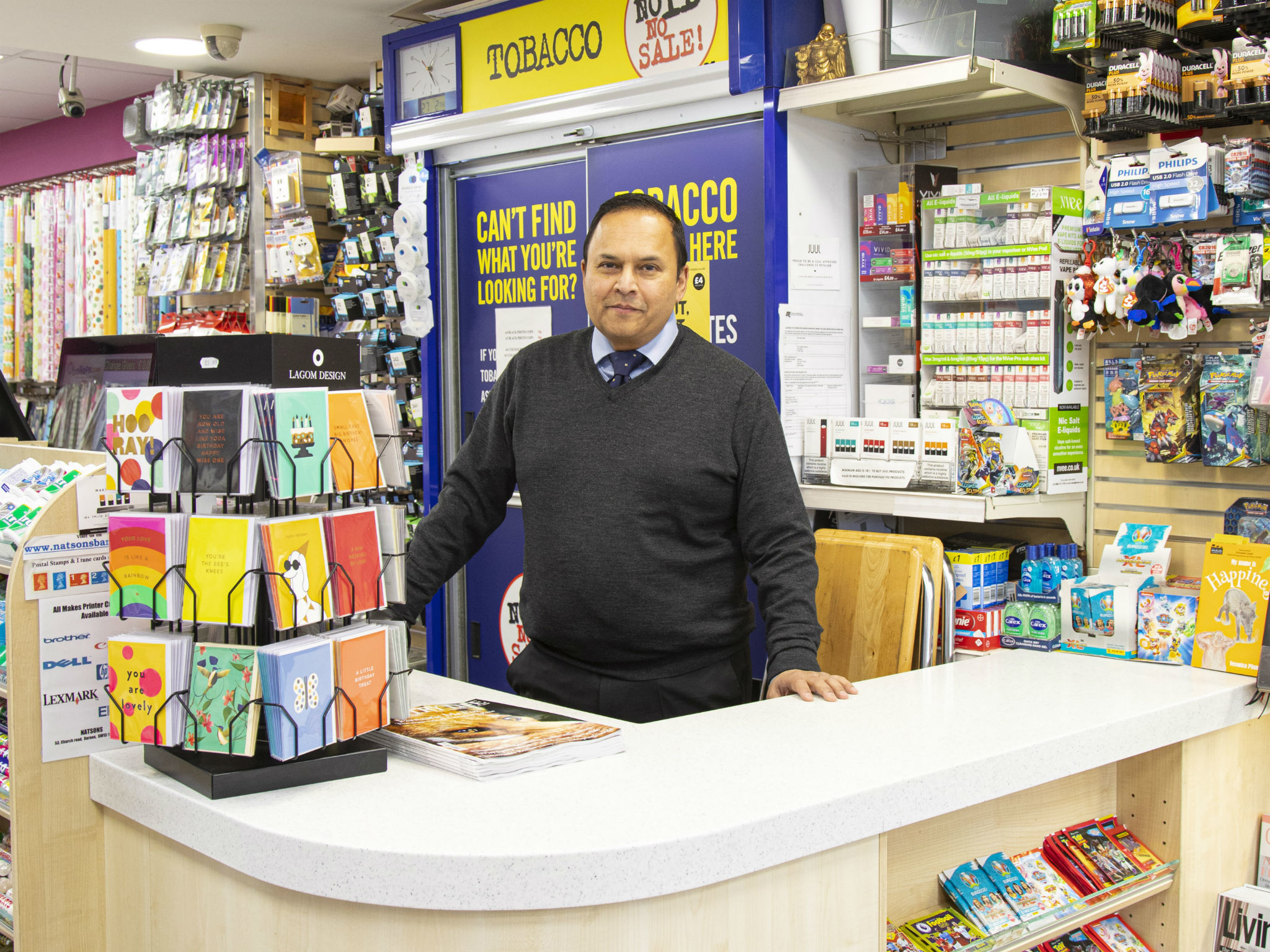 Vipin Patel, manager and owner of Natsons in Barnes, has been running his store for 22 years

‘I’ve built up so many relationships over the years: one of my regulars, Will, even came to my daughter’s wedding. I also gave Robert Pattinson his first job. He worked as a paperboy for two years. Whenever it rained or there was bad weather, his parents used to help him do the rounds. Things have changed since then. Seventy percent of our revenue used to come from newspapers and magazines, but no newsagent can solely rely on them anymore. Now we have a tower of Beanie Babies.’

‘A customer told me he was going to do vodka tampons’ 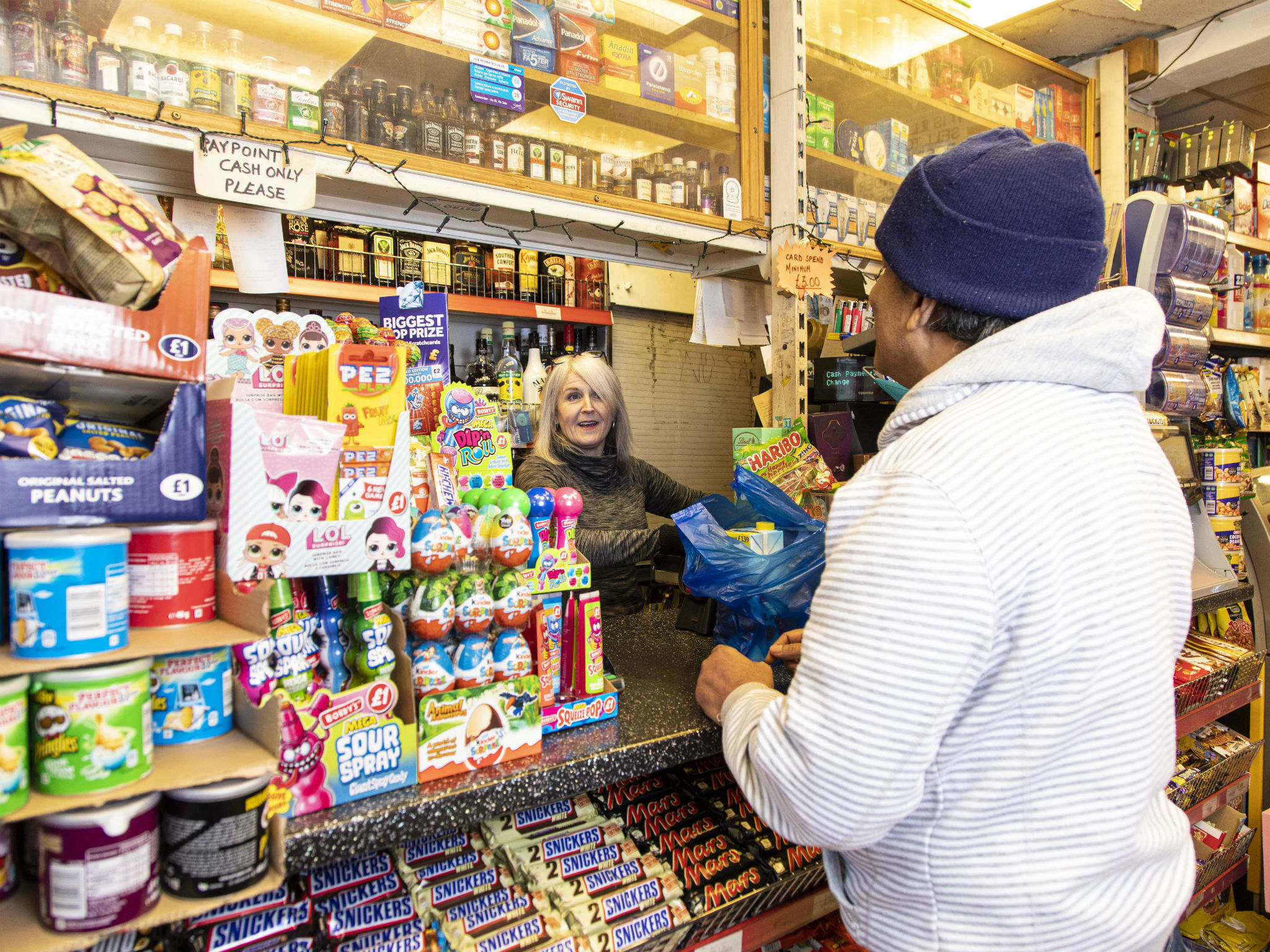 ‘I’m the only white, female corner shop owner in Southwark. The head of licensing for Southwark told me he didn’t think that anyone else like me has done this job in the last 30 years. When I go to the cash and carry, I’m the only lady in there. It’s definitely a male world.

‘The students around here love my shop because you can buy booze 24 hours a day on the weekend. We serve through a hatch after midnight. People will stop off in their Ubers on the way to afterparties to stock up on alcohol. One time, a guy came in asking for tampons and, when I asked if they were for a girl, he said no. Then he told me he was having a party with his friends and they wanted ‘do vodka tampons’ and, er, insert them! Apparently it’s a way to get alcohol into your system really quickly. I don’t judge my customers for anything that they buy. Of course we get people coming in stoned and buying everything because they have the munchies. I just find it amusing.

‘There have been some hairy moments in the shop. Occasionally we’ll get a gang come in. There will be ten boys in the shop and they’ll start nicking things. There’s really nothing I can do about it. If anyone is rude to me, I’m just really nice back to them. Before I owned the shop, I ran a café in Deptford, so I’ve dealt with the public for years and nothing fazes me. I kill them with kindness – and I get a proper kick out of it.’ 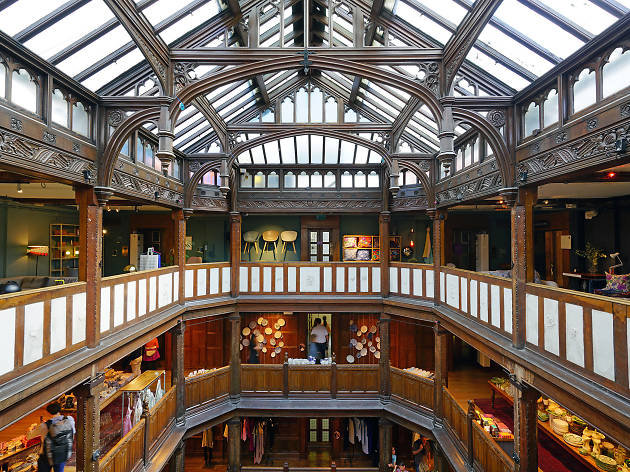 Shop ‘til you drop – or ‘til your bank account runs dry