No one could escape 2017, but these cocktails made it a bit more manageable.

Though it wasn’t all bad, 2017 made us want to throw back a drink or seven—but as we sipped our way through the city we quickly realized that the year’s best drinks were really to be savored. It was also a year for escapes, be it to another time—when martinis reigned—or another country, when a decadent espresso transported us to an Italian piazza far from reality (ahem, a mall in Century City). Here are 2017’s best drinks, for your sipping pleasure in the new year and beyond.

RECOMMENDED: The best dishes and drinks in L.A. of 2017 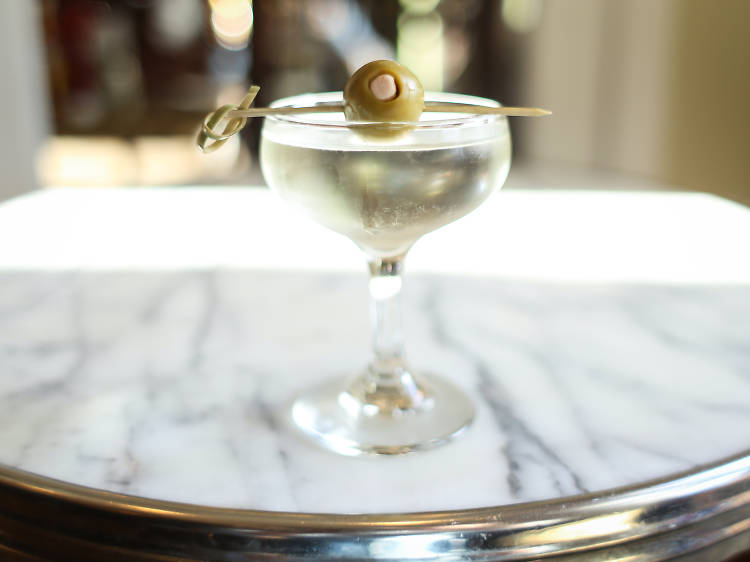 Slightly Salty by the Sea at Big Bar

One of bar manager Cari Hah’s favorite drinks is the martini, which means you can almost always find a variation on Big Bar’s ever-rotating menu. Earlier this year she changed the dirty-martini game with this cocktail involving Edinburgh Seaside Gin, Lustau fino sherry, Gancia dry vermouth and a couple dashes of L.A.’s own Miracle Mile “Dirty Sue” bitters, drying out the dirty martini and cutting down on brine—without losing that classic, salty bite. $15. — Stephanie Breijo 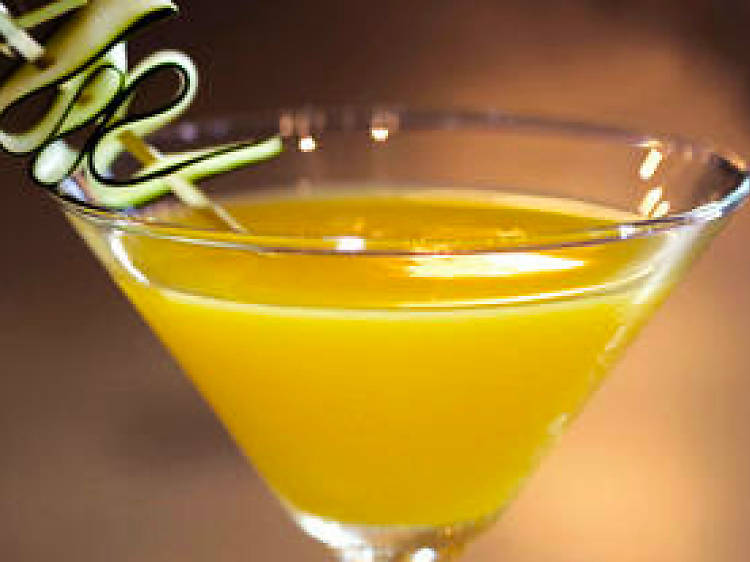 This cocktail is full of flavor, tying in real passion fruit purée with fresh-cucumber notes and grapefruit. The best part about this cocktail? You get to choose which base spirit you’d like, be it rye, gin, pisco or vodka. (Hint, hint: It’s best with pisco.) $14. — Jenn Brous 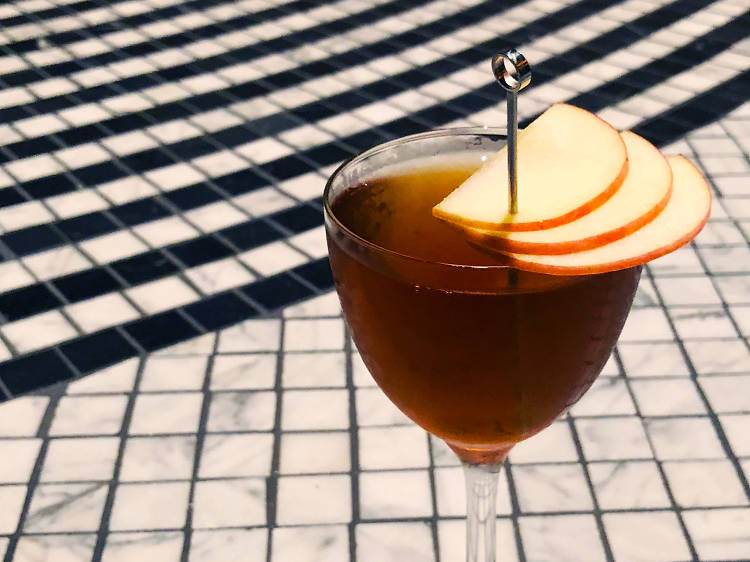 I’m curious to see what else opens up in Beverly Grove’s Robertson Plaza, and if there’s anything that can top Bibo Ergo Sum—“I drink, therefore I am”—the stylish cocktail bar that sits in its back corner. The menu is littered with artful drinks, but my favorite is by far the Cold Hollow: an Amontillado and Oloroso sherry-based blend of a house-made salted caramel apple cordial, Pierre Ferrand cognac and Plantation O.F.T.D. Overproof Rum. It’s balanced, with a wintry depth to it, and without overbearing sweetness—despite the salted caramel. $12. — Stephanie Breijo 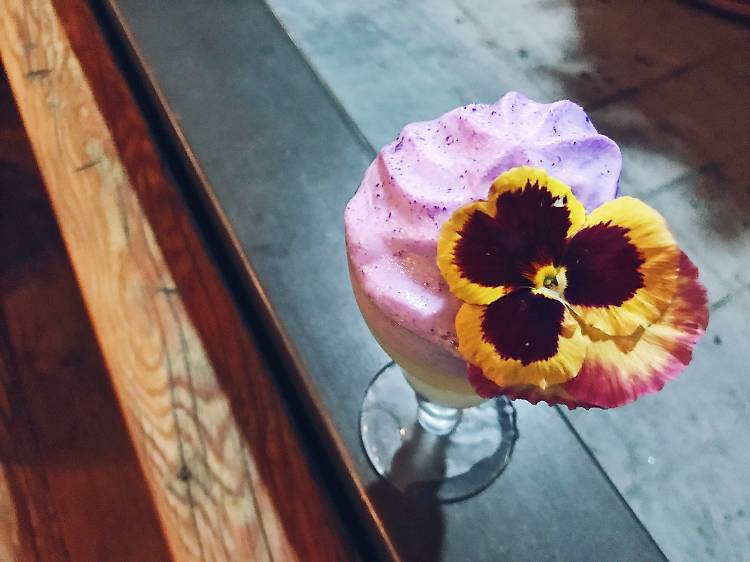 E.T. Foam Home at the Wallace

It’s easy for a flower-scented cocktail to come off as a boozy cup of potpurri, but at the Wallace, this drink’s crème de violette foam is light in flavor and almost pillowy in texture; a perfect entry point—and complement—to the cocktail’s shaken blend of gin, St. Germain, lemon juice and marjoram. $15. — Stephanie Breijo 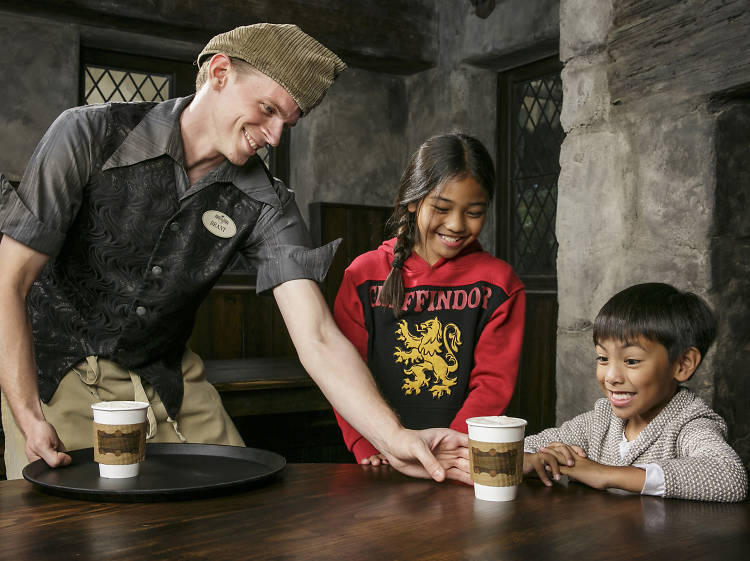 Butterbeer, the butterscotch-foam-topped cream soda straight from the Potterverse, shouldn’t taste good served hot. And yet, this seasonal twist is even better than the original. Substitute fizzy soda for something akin to toffee-flavored hot chocolate, and you have a magical recipe to warm up on chilly theme-park nights. $6.99. — Michael Juliano 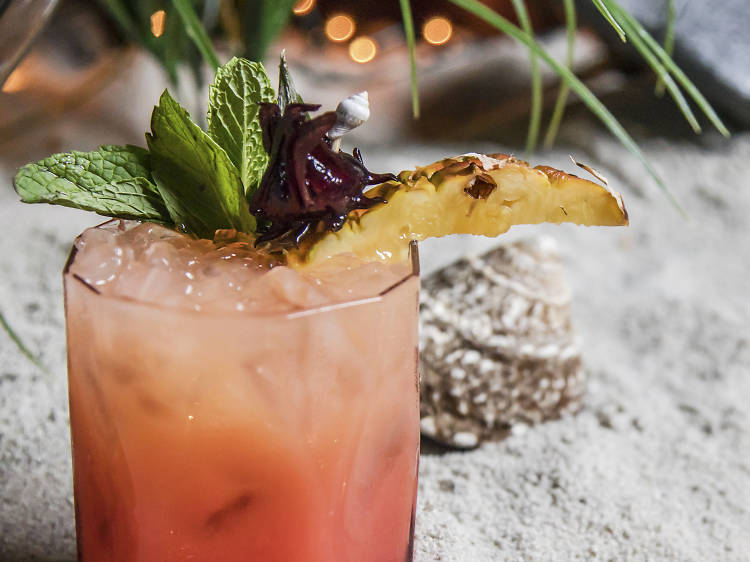 It’s hard for me to stay away from Pacific Seas. The over-the-top tiki kitsch, the quiet nooks near beached rowboats and other maritime ephemera, the DJ sets played from the bar’s centerpiece—an actual Chris-Craft luxury boat—all make this one of L.A.’s most colorful and whimsical watering holes. This, in my humble opinion, is the heart of Clifton’s Republic, and it’s a fitting ode to Clifford Clinton’s original, 1930s-built Polynesian-themed bar that used to sit a few blocks away in DTLA. My Pacific Seas go-to is the reliable Mai Tai, a tiki classic here made using the original 1944 Trader Vic’s recipe. Expect a perfectly tart concoction of fresh-squeezed lime juice; house-made orgeat; Curaçao; and both Jamaican and Martinique rums. $15. — Stephanie Breijo 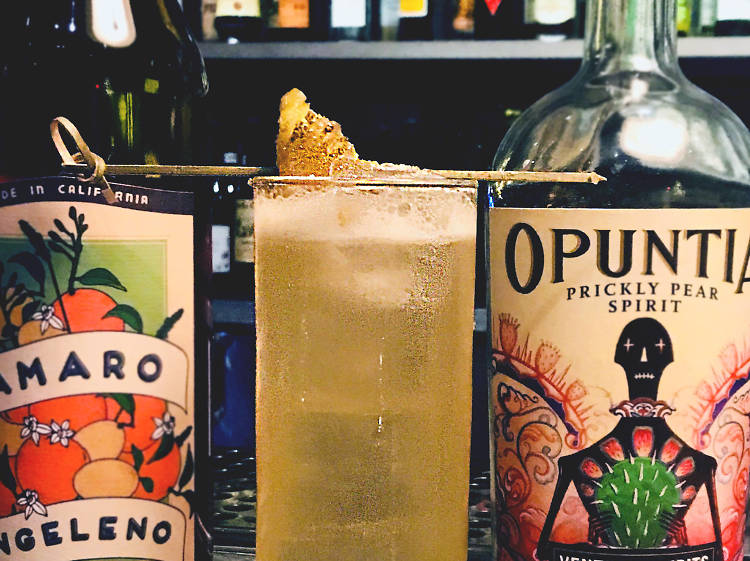 This cocktail shows a good balance of bitter and sweet, combining the locally-made Opuntia prickly pear spirit with the also-L.A.-made Amaro Angeleno, plus a pineapple shrub, citrus and ginger ale. Bonus: The garnish is a beautiful charred sugar pineapple wedge that smells delicious. $14. — Jenn Brous 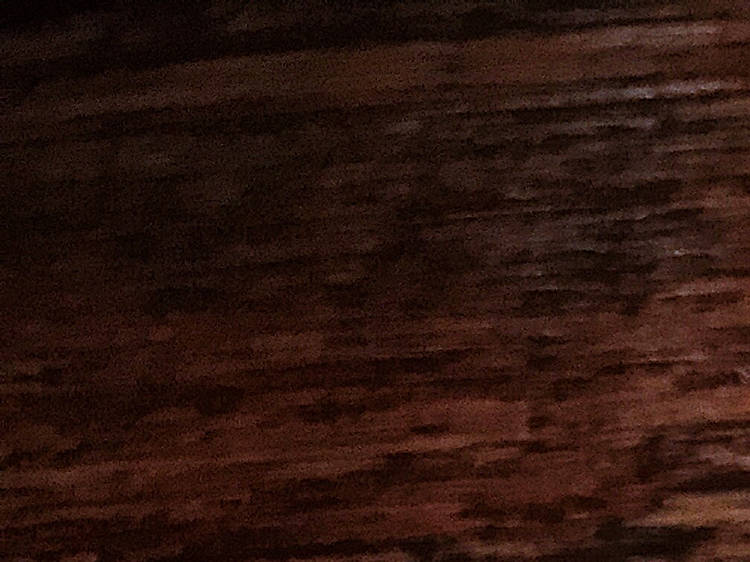 Your first instinct may be to go for one of the many reds on offer—sure to complement Angelo Auriana’s expert Northern Italian menu—but I say: begin instead with something a bit deeper, a cocktail that's perfetto for enjoying around that fire pit. One of Officine Brera’s longstanding cocktails, the Gentleman’s Breakfast is built on bourbon that’s been infused with bone marrow. The addition gives the drink less of a meaty tone and more of a rich one; the fat wash lends body to the cocktail without overpowering in flavor. Add some Averna, a few dashes of walnut and angostura bitters and an orange peel and you have somewhat of a savory take on a Black Manhattan. $16. — Stephanie Breijo 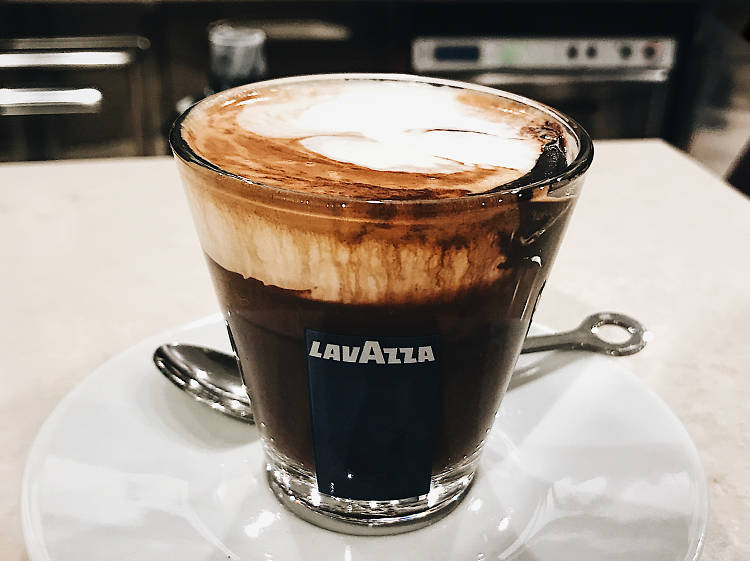 Italians know how to do dessert right, but even the phenomenal tiramisu upstairs is worth skipping for a cup of Eataly’s traditional Bicerin. Found in the Lavazza espresso shop on the first floor, this centuries-old recipe of layered hot chocolate, espresso and cream is so indulgent, thick and rich that you may just forget there’s fresh cannoli at the next counter over. $4.20. — Stephanie Breijo 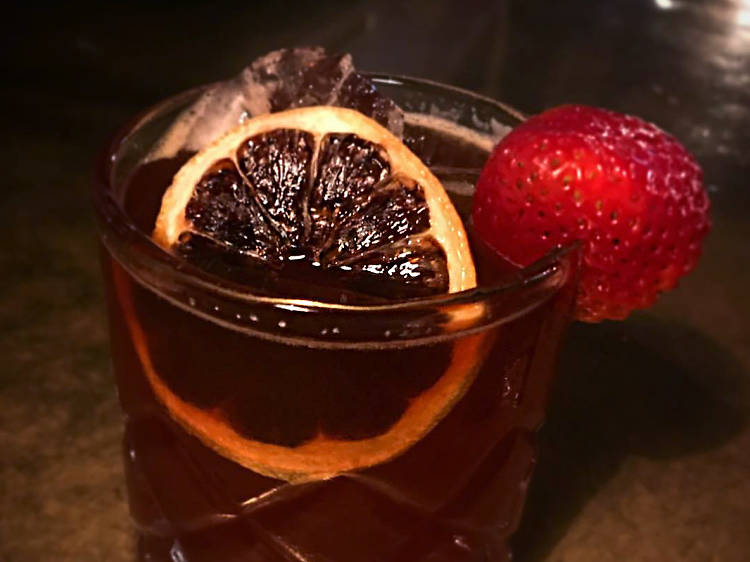 Let’s Talk About It Later at Good Housekeeping

The Let’s Talk About It Later is a great introduction to amari—the Italian-style herbal liqueurs—for those new to them. This cocktail is deliciously crafted with a house-made strawberry oleo, bourbon and Amaro di Angostura, then gets topped with a Fernet float. This boozy sipper is definitely a fave. $13. — Jenn Brous 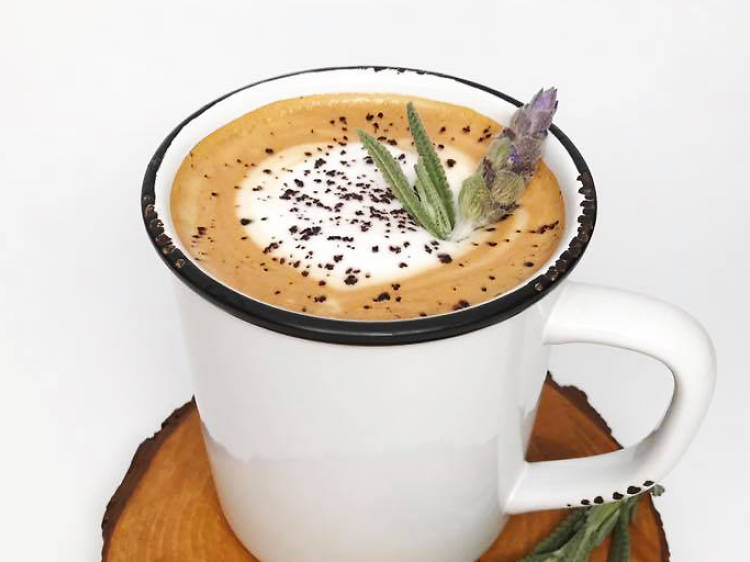 This small K-Town cafe makes rose and lavender syrups by infusing the petals in jars of water and cane sugar, which you'll see steeping on the counter. The pastel syrups are then used in coffee drinks, sparkling sodas and desserts. The rose and lavender lattes—best iced, IMHO—are creamy and not overly saccharine, as the floral notes counteract the sugar. $5.40. — Juliet Bennett Rylah 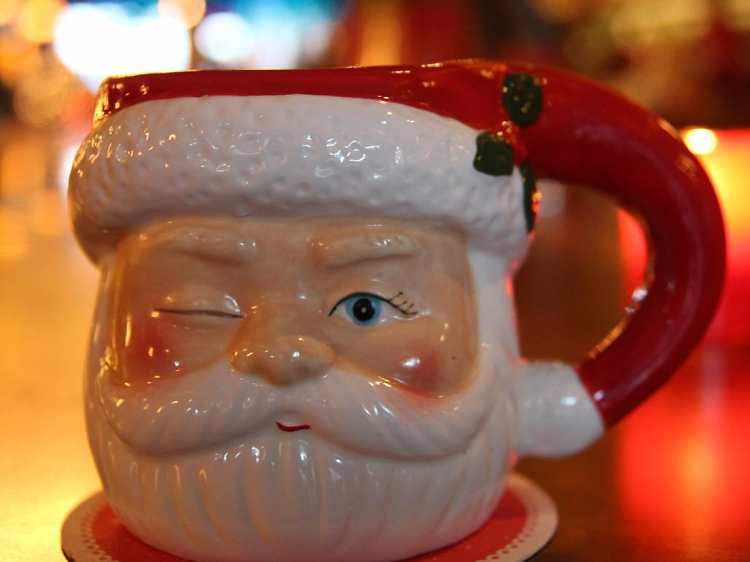 This pop-up bar from Westbound is the watering hole that lets you reach a Christmas-gasm, the kind of joint that makes even the most jaded Scrooge cheery with its It’s a Wonderful Life vibes. And this year’s Chailent Night is perhaps its most holiday-tastic tipple, a piping hot blend of whiskey, vermouth and creamy chai-spiced goodness that’s basically Christmas in your mouth. Sure, this pop-up is almost up, but that just means you should put this drink on your list (and maybe order it twice) in 2018. $16. — Tim Lowery 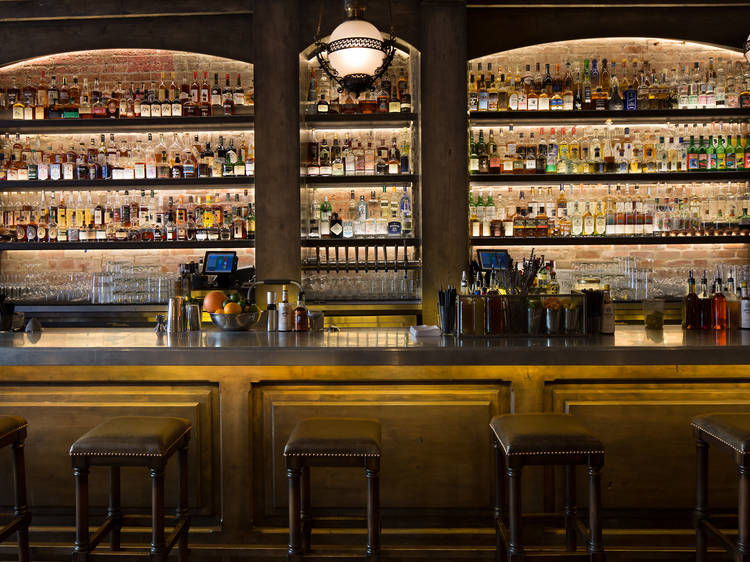 Whether you’re drinking in Culver City, Downtown, Highland Park or Santa Monica, there are exceptional places to imbibe all across town.