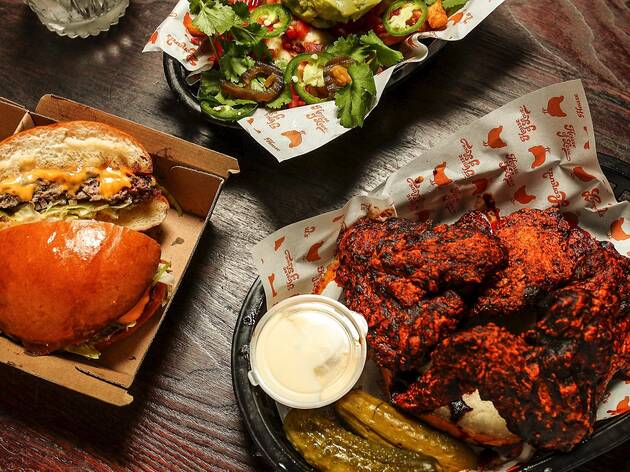 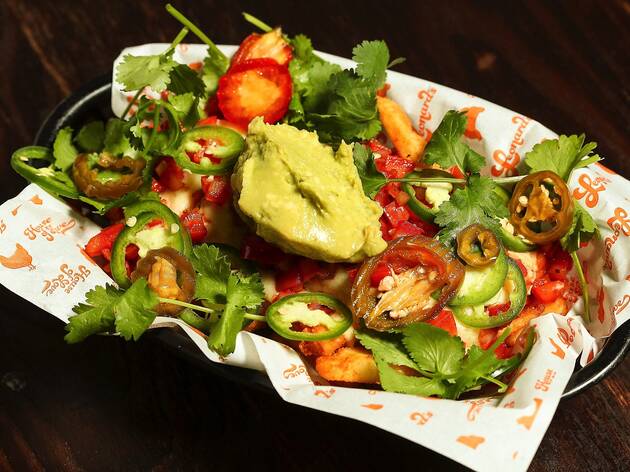 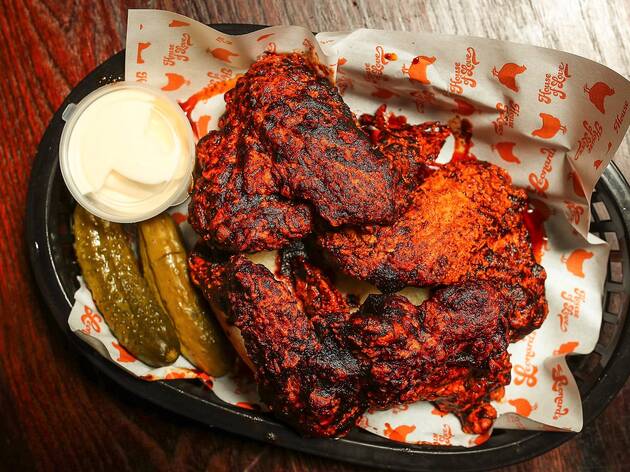 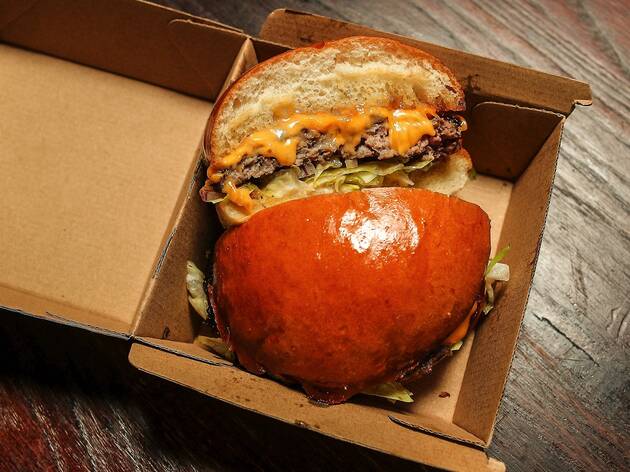 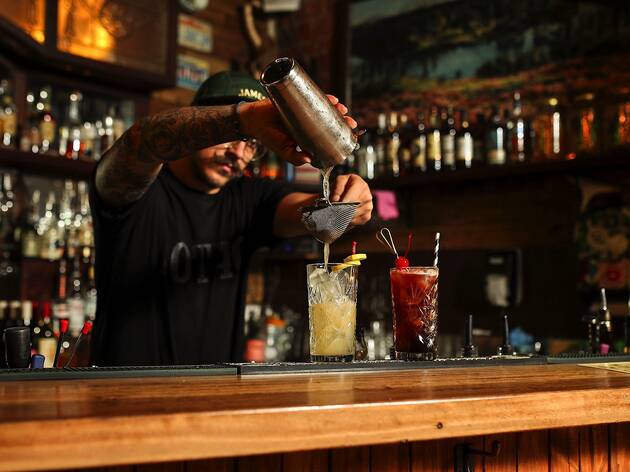 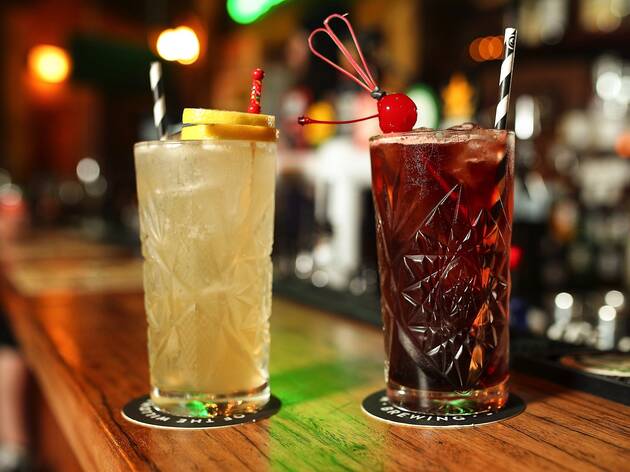 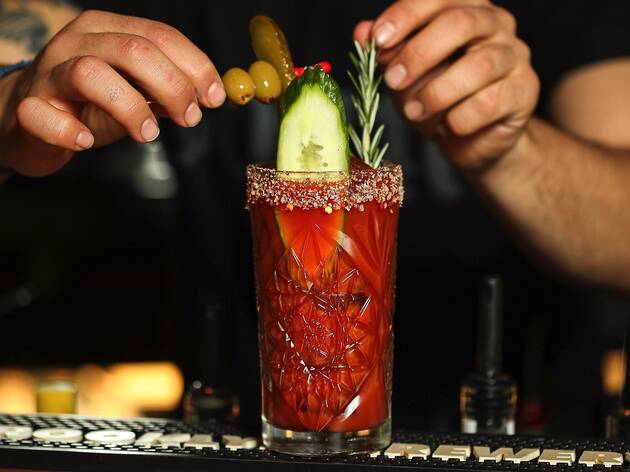 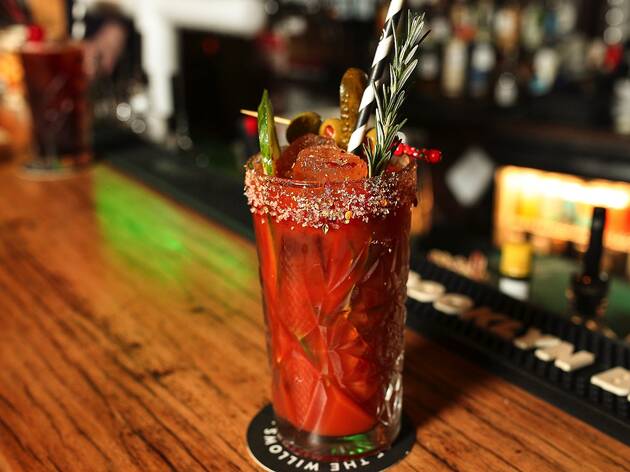 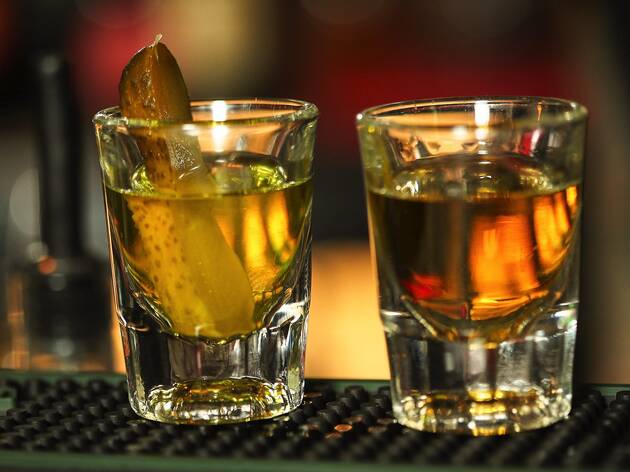 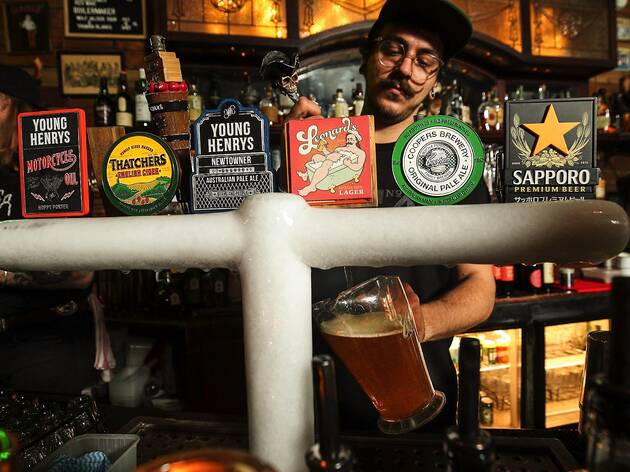 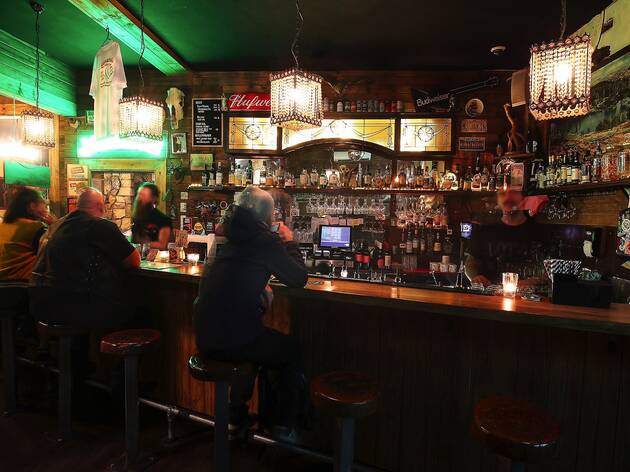 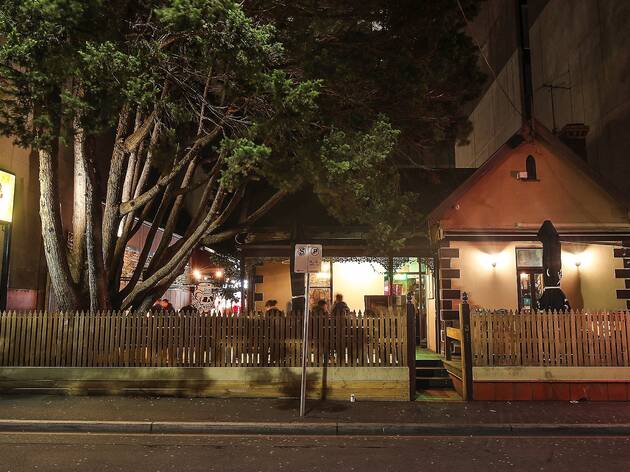 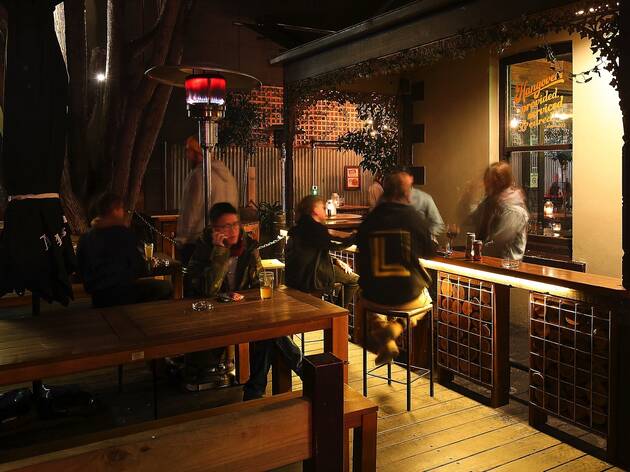 Walking into Leonard’s is like finding the coolest house party at the ski resort, circa 1983: a place where staff kick back to rock’n’roll, drink whisky and make fun of the bleach-blonde varsity ski team crowd. The venture from Guy Bentley and Mark Catsburg, part owners of Sweetwater Inn, plus former Sweetwater bar manager Jonathan Harper and chef Nick Stanton (Longhorn Saloon, Nieuw Amsterdam), occupies a corner bluestone just off of Chapel Street in South Yarra.

Just like a ski lodge should, Leonard’s has an air of instant comfort. The room is entirely surfaced in untreated pine, with warm lighting, plenty of open space and a roaring fire. The stained glass back bar is flanked by mounted longhorns and a mongoose valiantly fighting a cobra – their epic battle frozen in taxidermied time. Long hair, tattoos, denim and beanies are the uniform, but far from being a den of hipster judgement, this place is ultimately inviting, free from the snark that ruins some northside venues.

Big, open doorways and windows frame scenes of folks eating in the big wrap-around courtyard, dotted with fairy lights and heated well enough to keep the blast-chilled winter at bay. Back inside, the central area is made up to look like a ’70s recreation room, complete with a painting of a nude brunette, board games and psychedelic orange wallpaper. The DJ spins Curtis Mayfield and Al Green from atop a vintage TV.

The bar offers an easy selection of smashable beers on tap, like Kronenbourg, Thatchers cider and a house lager brewed by Coopers. Bottles offer a few more craft choices, but this isn’t the place to debate the finer points of Kiwi vs German hops. Cocktails lean to the sweeter side, but there’s liberal use of fresh juice and plenty of great Mezcal, tequila and whisk(e)y to keep connoisseurs happy. Try the ridiculously refreshing Hexican with tequila, fresh pressed apple, spiced sugar, cucumber, mint, and just a touch of heat from hellfire bitters.

Chef Stanton is clearly having a blast in the kitchen, cranking out high-quality burgers and charcoal chicken by the half. Winner Winner Chicken Dinner for $24 is enough to feed two and gets you half a tender, herb-crusted bird, a sour cream drenched baked potato, Greek salad, chips, mash, gravy and cheeseburger stuffing. Yup, that’s three kinds of potato, and you’ll want to finish them all. This chook is the stuff of wistful Red Rooster memory realised for an adult palate; quality and creativity in a way the fast food version never could be, but just as satisfying and nostalgic. A special of sticky eggplant in milk buns sees gooey slabs of slow-cooked eggplant balanced by the crunch of bright and salty pickled veg. It’s the perfect umami-carb onslaught to allay the jealousy of the veggos. The fun, quality and lack of pretension in Stanton’s food is a microcosm of everything this place has got right.

The crew at Leonard’s House of Love know this ‘hood needs more places to hang out if you’re not into mini skirts and Tay Tay. It’s a service they’re happy to provide, and with love, whiskey and chicken for all, they’ve nailed it.