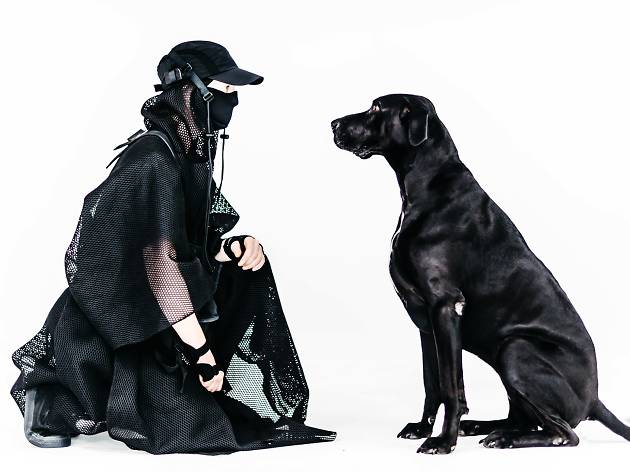 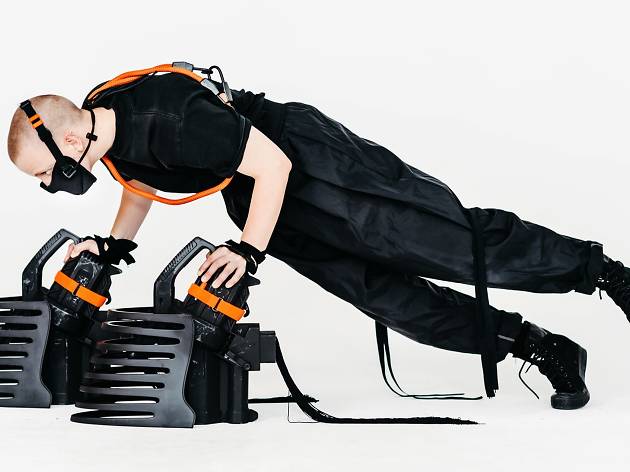 There is something deliberately ritualistic about the way we enter the space in Chunky Move’s new show Token Armies: we queue outside for a while; when we are ushered in, we don black capes in a kind of improvised mess hall; eventually we enter the cavernous expanse of the Meat Market, hugging the edges but allowed to move about at will. The ‘show’ is already in progress, and it takes a little time to adjust to the mood. Without us realising it, we’ve been recruited.

The sound is dominated by low-range frequencies, rumbling, mechanical noise that has a disturbing effect on the body of the spectator; it puts you on edge, hyper-aware. The mise-en-scène is complex, full of moving parts that are initially overwhelming. There is a massive vehicle that prowls and shudders around the playing space like a sentient tank; cyborg contraptions made of large machine heads powered by human limbs stalk the room; masked soldiers run around the perimeter; and most arresting of all, a real horse, a dog and an eagle, all black.

Black is the dominant colour, augmented by flashes of orange. It’s an aesthetic that feels futuristic on the one hand, and directly evocative of the sleek fetishism of the Nazis on the other. So much of the design – both the sculptural and wearable design by Creative Technology Co. and the costume design by Paula Levis – is concept driven, so deliberately restrictive and dehumanising, that the shift to naked and near-naked bodies that occurs at the midway point feels utterly transformative.

It’s a necessary transformation in some ways, because as effective and imposing as the piece initially seems, it does suffer in its first half from the occasional longueur, a sense that, once established, the ideas begin running on empty. Which is not to say that they are bad ideas. The most intriguing is the one suggested in the title: these are token armies, not engaged in actual warfare but postures, or systems that begin to function effectively even without a purpose.

The animals are a fascinating addition; they bring a sense of danger along with the potency of their symbolism. Mark Antony “let slip the dogs of war” and the horse and the eagle have long been associated with warfare. Their black agency is corralled, but latent. Husbandry is an intriguing feature of the movement, and not just with the animals. People are led about on leads, or chained to moving platforms, willingly dragged about like a populace excited by the posturing of war.

And the audience is implicated in the action too. We often feel like a township come out to watch our armies marching past, destined for the cannon and the shot; or perhaps occupied peoples, viewing the marauding enemy with suspicion and fear.

The second half is separated by an extraordinary sequence involving the liberation not of a country or populace but of the dancers who have been locked up in the cyborg costumes. Christ-like, the two men emerge, and move towards each other, a sign for the entire cast to disrobe and merge with one another, a raft of the Medusa, or an orgiastic renaissance painting. It’s the moment the piece tilts into the humanist and organic, and the dancers make the most of it. Lyricism and tenderness trump precision and confinement, and the effect is rather beautiful.

Chunky Move’s new artistic director Anthony Hamilton has made a bold and brazen statement with Token Armies, his first production for the company: high concepts and striking design can be expected to feature, along with a willingness to mine popular culture for its references. This one draws from Star Wars and Alien, but also from Richard Mosse’s deeply disturbing high-tech footage of refugee camps and government surveillance. The balance between concept and choreography will need further tuning, but Hamilton’s first shot across the bow is certainly a memorable one.