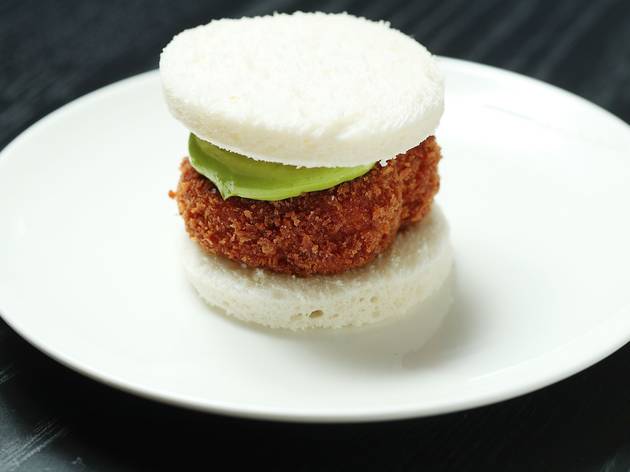 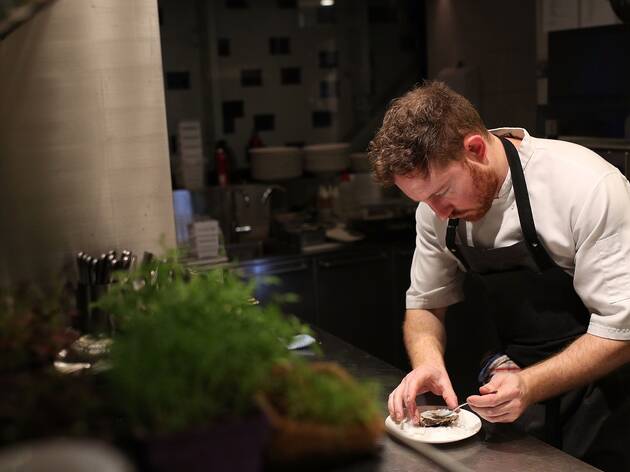 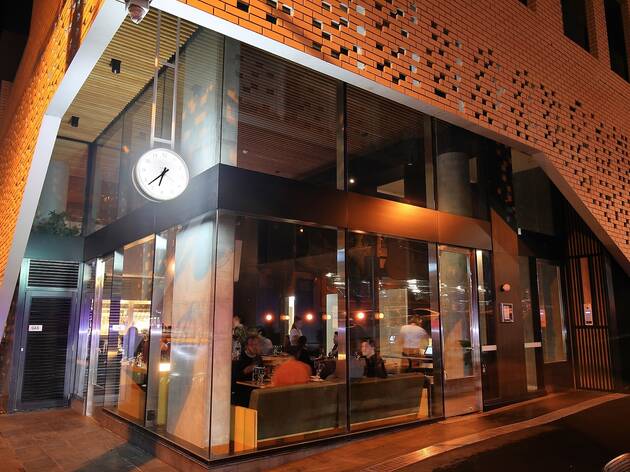 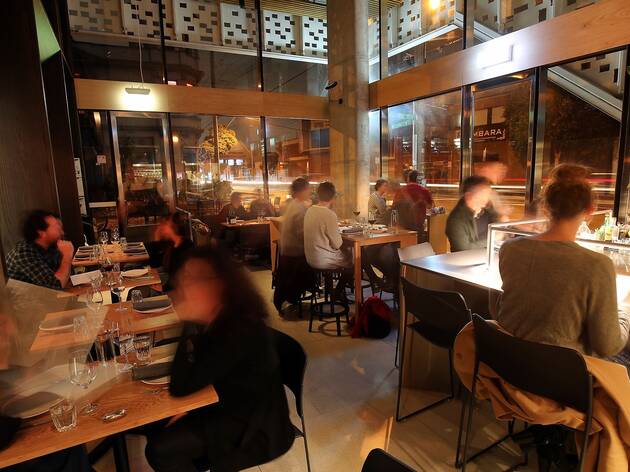 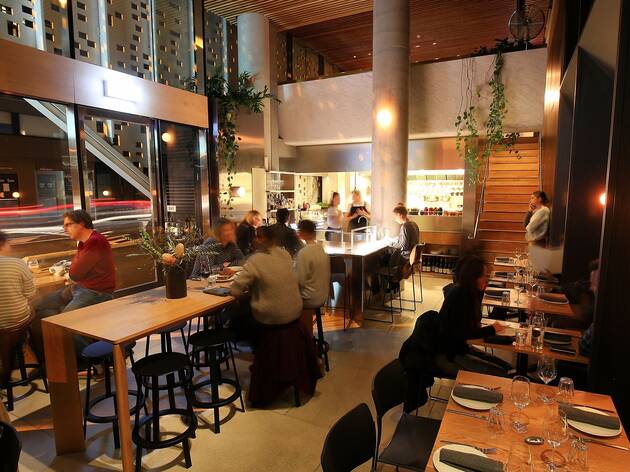 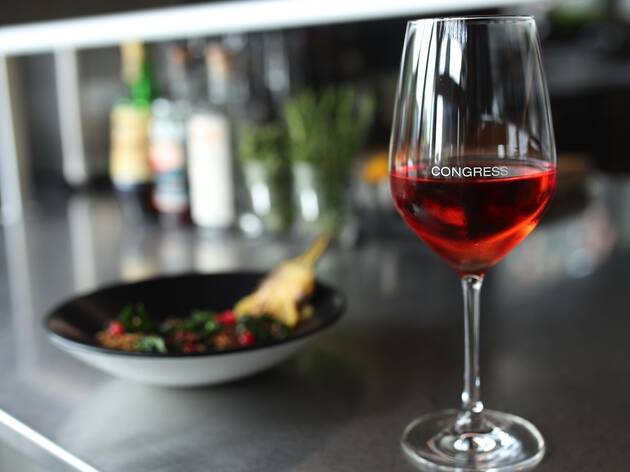 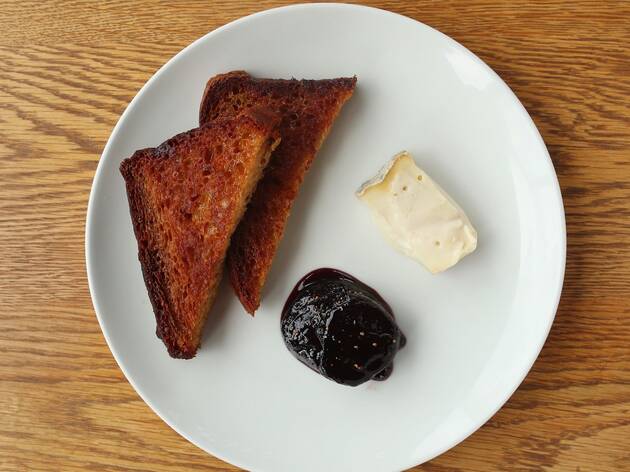 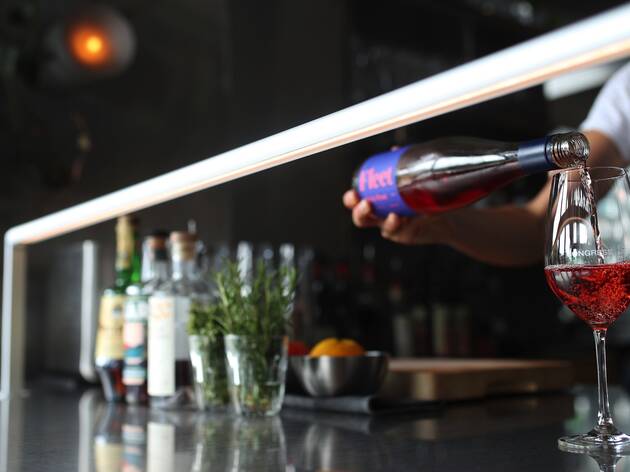 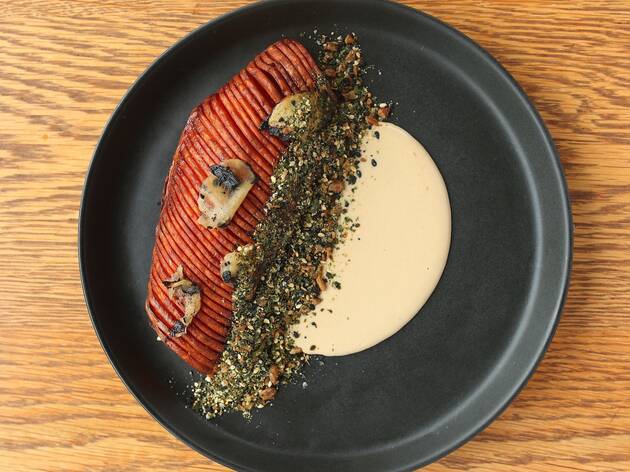 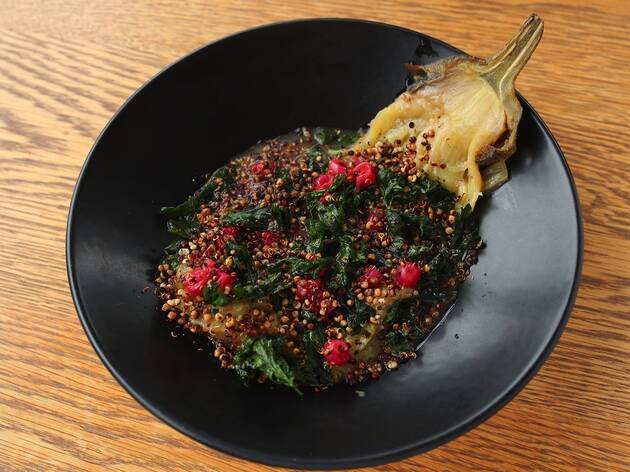 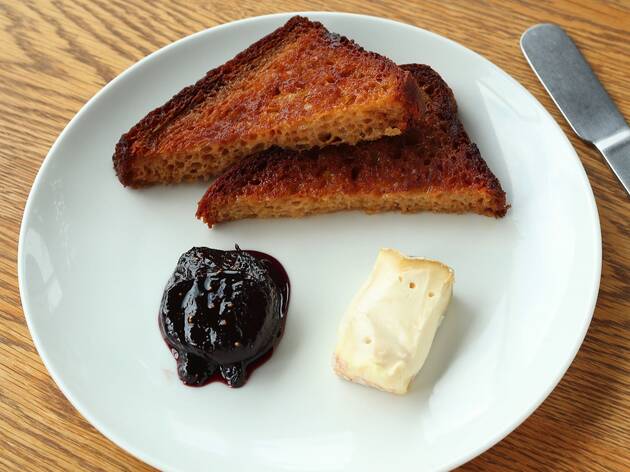 You’ve heard about the pig’s head sanga, of course. The breaded puck of pig jowl goodness larded with chicken jus that explodes in juiciness in the manner of a xiao long bao. Lordy it’s good. Ably supported by a peppery mustard leaf mayo and sandwiched between two rounds of fluffy white bread guaranteed to put any carb dodger on a glycaemic high, it’s a must-order at a place that has several dishes vying for that status.

Also see: house-made kangaroo pastrami, rich and velvety, none-too-gamey strips served on a cumulonimbus-light cultured sour cream with crunch in the form of fried shallots. And a fanfare for the common veg with a wickedly caramelised tumble of baby brussels sprouts, the perfect balance of char, crunch and squish, blanketed in creamy tahini with bitter leaves and roasted seeds.

Welcome to the Congress conundrum. It pitches itself as a wine bar and follows through with a ripe little globe-trotting list with a specialised section of orange picks to remind you it’s Collingwood. It's mixed with local heroes like Mac Forbes (his RS28 riesling) and fellow Yarra Valley traveller Luke Lambert’s syrah. Anchoring an asymmetrical new apartment development (what, another one?) in an area where angels once feared to tread, it really should be another example of developers bunging desultory hospo businesses on the ground floor to bring in buyers, cannibalising waiters and customers from rival businesses and bringing about the imminent ruination of a once-proud industry.

But if only more of these anchor tenants were like Congress. This slick little corner space packs a lot into its compact dimensions. It rises above the base material of concrete to feel warm and inviting thanks in part to good heating, and in part to a good eye, mixing wood and steel into the mix and adding a counter overlooking the kitchen for those solo diners dropping in en route to their latte lifestyle upstairs.

If there’s one criticism to be levelled it’s that the kitchen is obsessed with sending out one massive umami bomb of flavour after another. It’s as if chef Jack Stuart, who’s rocketed to the top of our “one to watch” list, is worried his audience is afflicted with culinary ADD. It’s certainly not singing in a key of subtlety when even the kipfler potatoes arrive with their boots on in the form of dried pancetta crumbs, smoked onion puree and toasted yeast flakes (just for the record, they’re delicious). Just roll with it and line-up a slice of the spongy rye and wholewheat sourdough with whisper-light malted butter, and maybe a wodge of charred leek on cheesy custard, then follow up with a roasted quarter Milawa chicken: one helluva bird. The skin is crisp-golden and the meat cooked to the precision edge of just-done with charred savoy cabbage and chicken jus for company.

The folks behind Congress are hatching plans to do something similar, only in an Italian vein, in Fitzroy next year. It’s a move that further cements the symbiosis between real estate development and the hospitality industry, but the success of their Collingwood gaff is enough to make us turn a blind eye to this deal with the devil. Come to think of it, maybe it’s a good time to buy off the plan.