Despite visiting on a wintery day with torrential downpour, Florian is packed to the rafters. Crowds spill out of its tiny entrance on both sides, customers waiting for a table are indistinguishable from locals ordering takeaway coffee, outdoor tables are shunted towards the shelter of the footpath. Making headlines in recent weeks for the consternation it’s attracted from nearby residents doesn’t seem to have affected trade for Florian in the slightest, only made it more popular if anything. Everyone is respectful and careful to steer clear from crowding the adjacent Rathdowne Street Café and nearby houses.

One only has to look at Florian’s immediate surroundings to understand its immense appeal. Occupying the space formerly inhabited by similarly popular café Small Victories, Florian’s Allpress beans and expertly curated, European-inspired menu sets it apart from the nearby mom-and-pop cafes with menus scarcely larger than a few select pastries and stock standard favourites. Fenton, Tanaka’s new fresh produce-forward venture, is perhaps the most similar operation in the vicinity but it lies a kilometre away.

Which is not to say Florian is a slick, soulless venture. Waitstaff are warm, friendly and accommodating despite having to deal with rain-soaked outdoor tables and customers jostling for space – testament to the community-minded, local favourite childhood friends Dom Gattermayr and Rose Richards have built in the beautiful building they inherited from hospitality ventures of yesteryear.

When we visit, we try the two Florian breakfast mainstays – eggs Florian and gravlax on toast (the latter is presently replaced by a cured fish plate with barramundi, ocean trout and Ora king salmon, capers, horseradish labneh a soft egg and rye). Kale finds its most decadent iteration in the former, braised in smoked paprika, onion and garlic before it’s topped with a soft gooey egg and blanketed in a buttery béarnaise sauce and shavings of aged Comte. The lustrous kale is almost meat-like in its richness – don’t be fooled by its relatively small serving, it will fill you up.

Salmon cured in salt and sugar for anywhere up to four days until it’s silky smooth is the star of the gravlax, only narrowly beating the perfectly cooked jammy egg and the fresh combination of whipped ricotta, sliced radish and fresh tarragon. It’s a dish that counters the popular saying ‘the whole is greater than the sum of its parts’ – each part of this dish is meticulously thought out and complements one another without overwhelming.

The folded herb and gruyere omelette is carted out on many a plate – so much so it’s a mainstay on both the breakfast and lunch menu, with the latter kicking off from midday, as is the leeks barigoule tartine, which utilises a French pickling method traditionally reserved for globe artichokes. The farmer’s breakfast is the regularly rotating soup du jour on the lunch menu is pea and ham when we visit, while the charred octopus with borlotti beans in a Paris butter sauce make us especially rueful that we hadn’t shown up half an hour later.

All manner of tarts, pies, cruffins and danishes from South Melbourne’s Austro Bakery sit stacked against one other in the front display cabinet – we avail ourselves of the flaky, fine pistachio, chocolate and ricotta danish, and the crackle of the pastry is noteworthy. Salads and sandwiches are available to go, too.

Unless you have the luxury of visiting on a weekday, the best time to visit Florian is the lull between 12 and 12.30 when brunch groups are just finishing and lunch crowds have yet to descend. Lining up for brunch may seem either quaint or unheard of apart from at establishments like Lune, but it’s most certainly worth it at Florian. 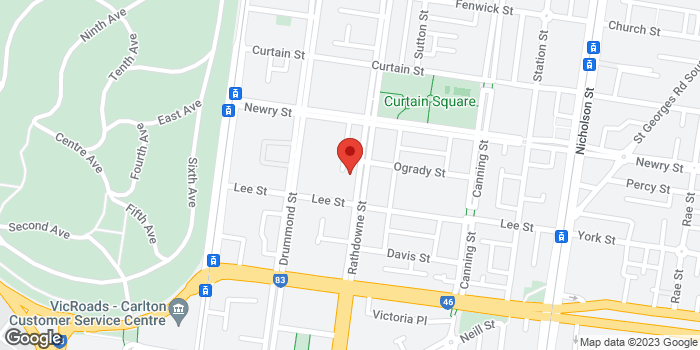